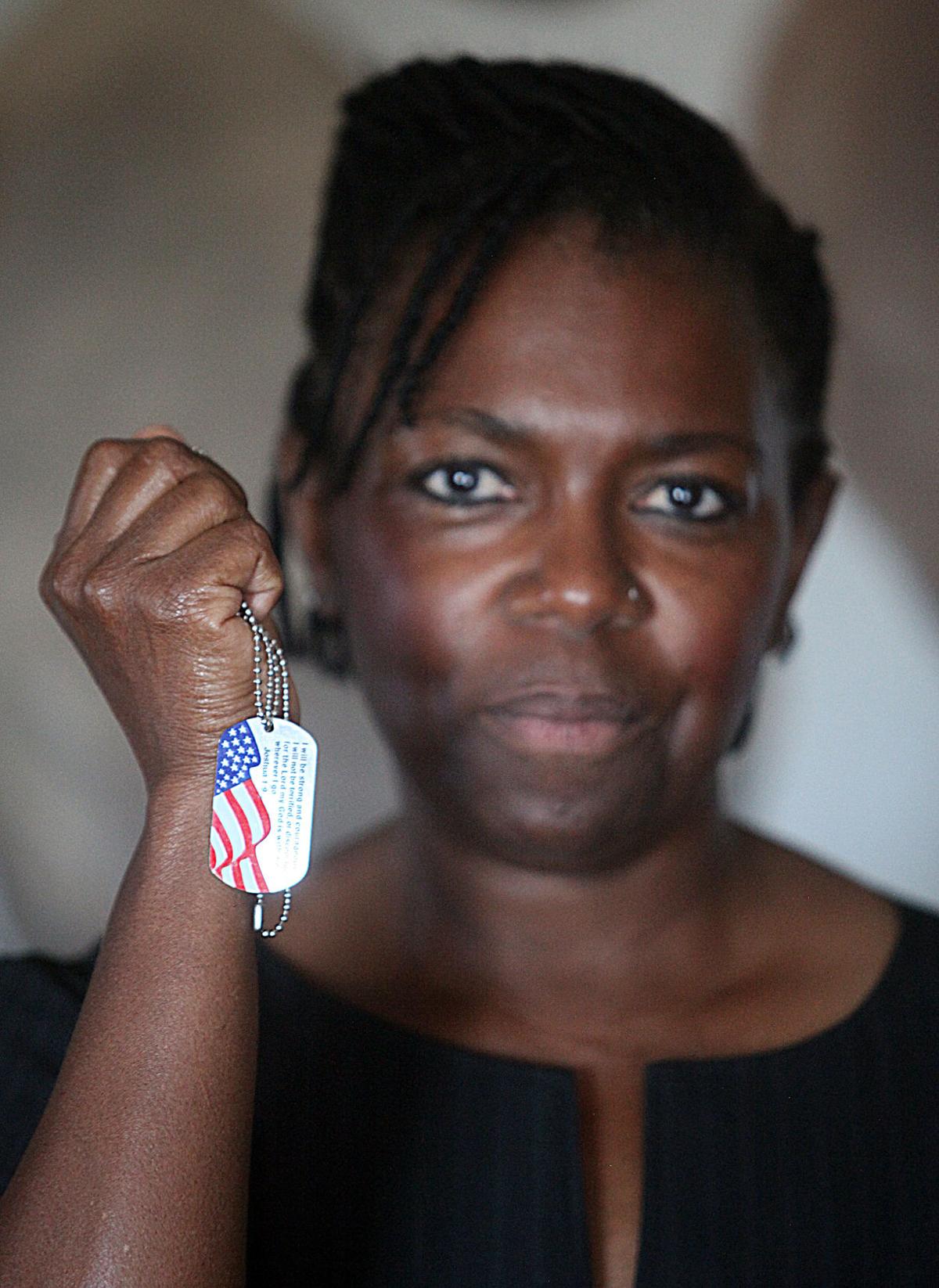 Former Command Sgt. Maj. Jacqui Clay holds up a set of inspirational I.D. tags she had made for her battalion for its deployment to the "sandbox" in the early days of the Iraq War. The tags include an American flag and a Bible verse from the Book of Joshua. 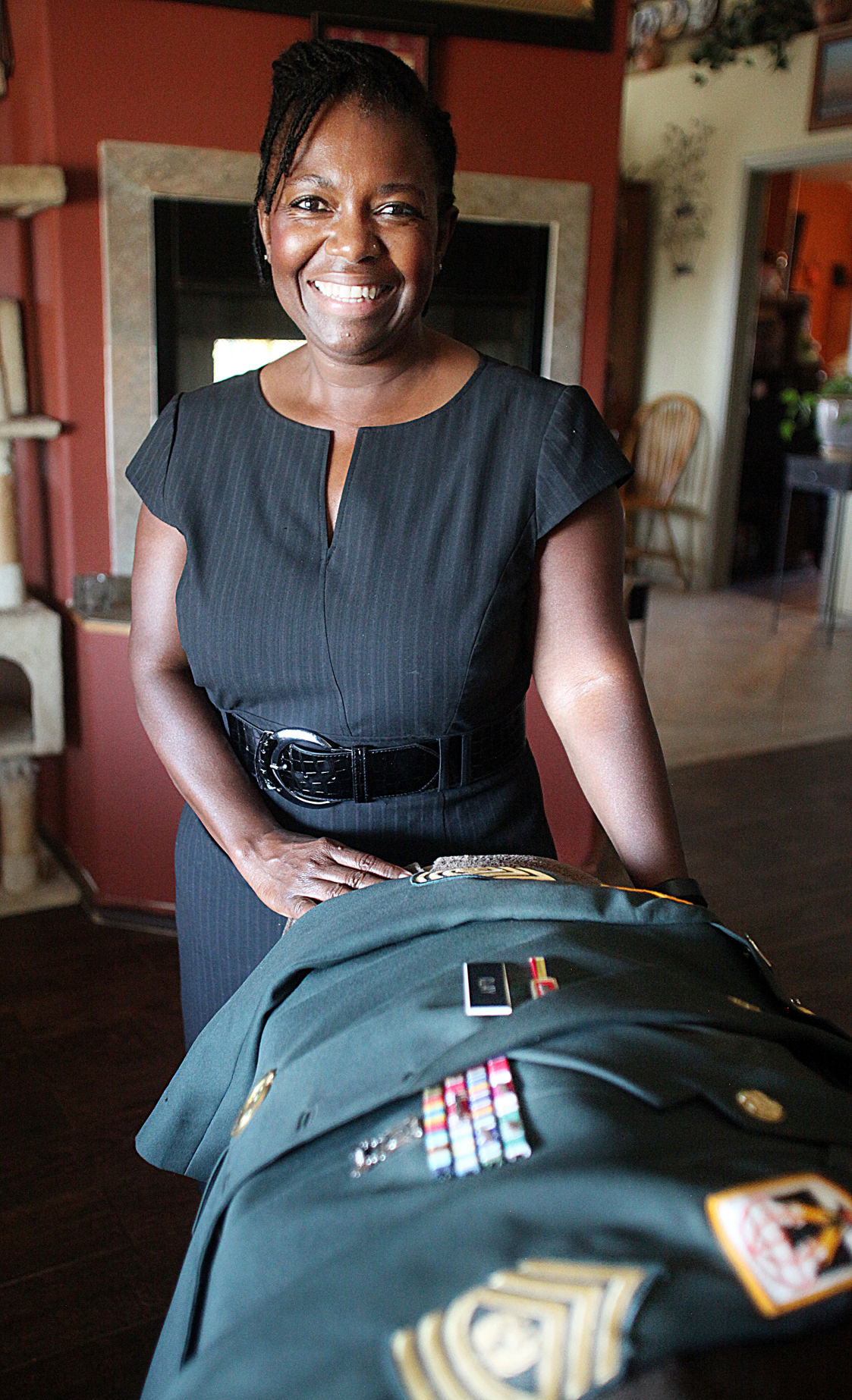 Clay served in the Army for 25 years. Fort Huachuca was her last stop. 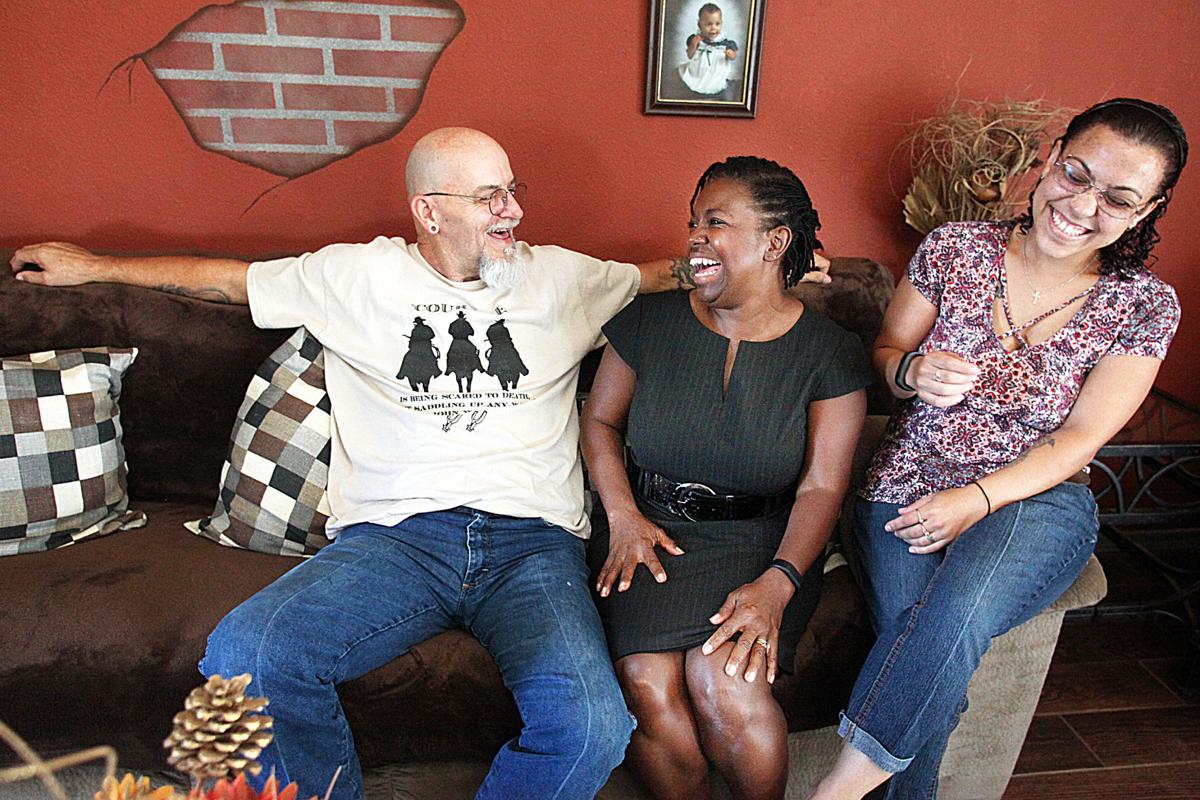 Dale and Jacqui Clay share a good laugh with daughter Myriah in their living room. 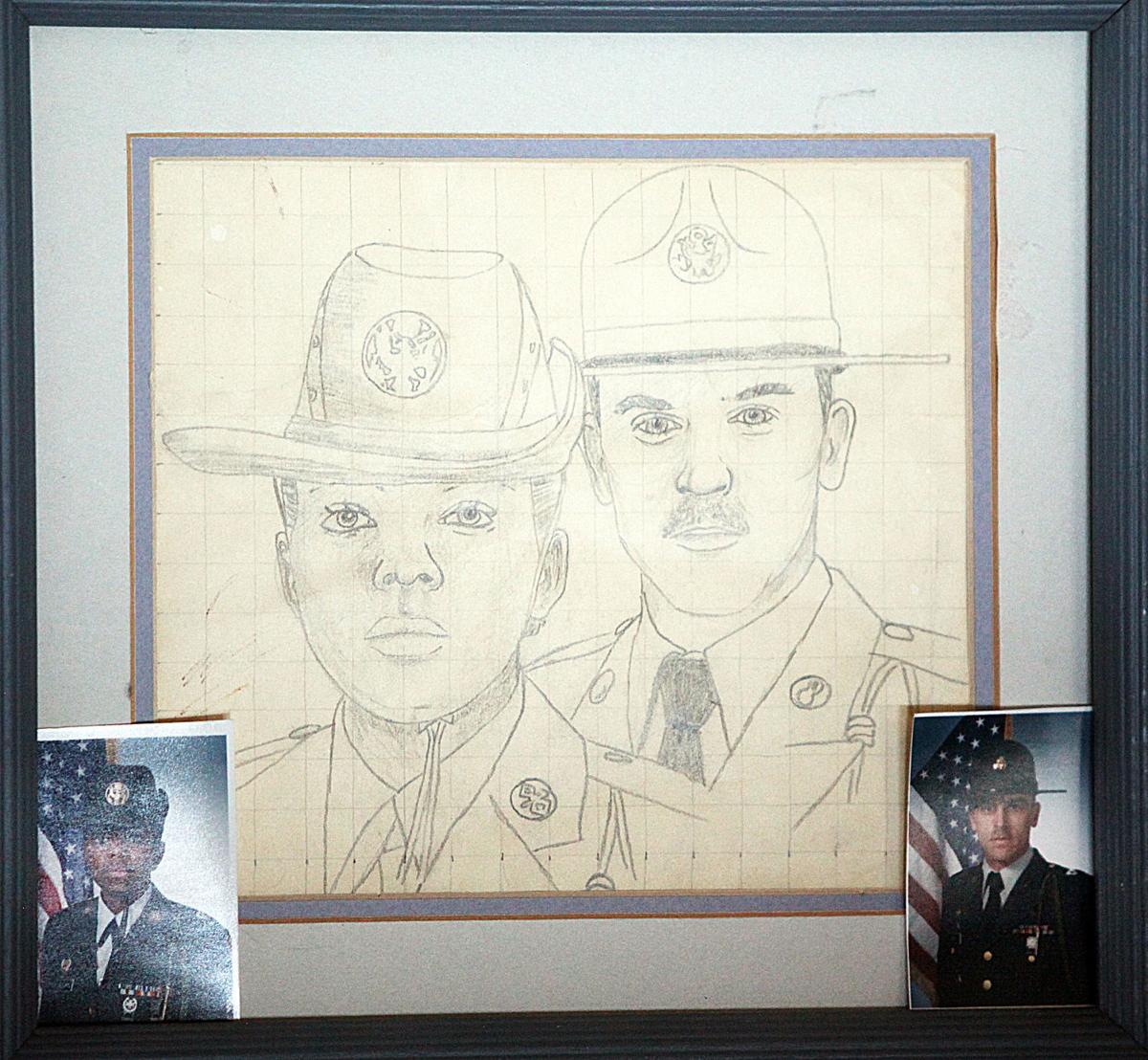 Clay’s husband Dale sketched this portrait of the two when they were both Army drill sergeants at Fort Dix, New Jersey. They were married there.

Former Command Sgt. Maj. Jacqui Clay holds up a set of inspirational I.D. tags she had made for her battalion for its deployment to the "sandbox" in the early days of the Iraq War. The tags include an American flag and a Bible verse from the Book of Joshua.

Clay served in the Army for 25 years. Fort Huachuca was her last stop.

Dale and Jacqui Clay share a good laugh with daughter Myriah in their living room.

Clay’s husband Dale sketched this portrait of the two when they were both Army drill sergeants at Fort Dix, New Jersey. They were married there.

SIERRA VISTA — The only regrets that retired Army Command Sgt. Maj. Jacqui Clay had while serving for 25 years were from missing portions of her children’s lives.

“But my family has forgiven me for that, and I’m spending my retired life babying them, loving them, giving them all the attention that I can to make up for the time that I lost with them when I was in the military,” she said. “But I am blessed because they understand.

“They supported me then, and they support me now.”

Clay joined the military on the delayed entry program as a high school junior in 1978. In 1979, she went to basic training at Fort Gordon, Georgia, where she also went through advanced individual training and combat telecommunications coursework.

By the mid-1980s, she was an instructor in Germany at the primary leadership development course, where she met her husband, James Dale Clay, who was also an instructor.

From Germany, Clay and her husband went to Fort Dix, New Jersey, to become drill sergeants together.

“He was in one unit, and I was in another, and we were constantly in competition with each other.”

The two created a large family together.

“We got married, we had our daughter,” she said. “We were definitely a mixed family. We had seven children altogether. I would like to say that we have 19 grandchildren from those seven children. All seven are mine.”

Clay mentions that out of her years in the Army, maybe four or five them were spent stateside, or “CONUS” (an acronym that stands for “continental United States”), as people in the military say.

She and her husband have been to Panama, Germany and Hawaii, among other sites.

The Clays’ final stop was at Fort Huachuca.

While there, Clay said, “9/11 happened. And the 86th Signal Battalion, where I was the command sergeant major, we were sent to Kuwait, then to Iraq.”

Clay and her battalion convoyed from Kuwait to Iraq.

“It was a very challenging and interesting tour,” she said. “We had to fight for everything we could have: for example, food. We had our MREs, but then we had to put up kitchens and bathrooms.

“Soldiers had to learn how to do the old-fashion latrines.”

The former enlisted leader had high praise for her troops.

“We had young kids we had to put in teams alone, isolated by themselves because we were Signal people, and we had to put the satellites up. I will tell you that I had the best battalion, the best soldiers, the best family to support me during this tour.”

After the deployment, she came back to Fort Huachuca and retired after serving for 25 years.

When reflecting on their deployment to the Middle East, Clay talks about how she wanted to make sure her soldiers were emotionally and spiritually ready.

“During deployment, of course, soldiers are going to get a little stressed out.”

She had a company make up approximately 300 specialized ID tags for the soldiers to wear around their necks. Along with an American flag on the tags was Bible passage Joshua 19: “I will be strong and courageous, I will not be terrified or discouraged. For the Lord my God is with me wherever I go.”

“That is important,” Clay said. “I just want people to know that even as a command sergeant major, God was with us. I brought God there, and he was there in front of us. Those soldiers embraced that. I believe that’s why we didn’t have any casualties. I believe that’s why we only had one vehicle that we lost in the whole time we were there, because God was on our side.

“If I don’t remember anything from our deployment, God was with me and God was with us, and it kept us together as a battalion.”

For as long as humans have walked the Earth, there has been conflict.

Whether by clans, tribes or nations, clashes to protect one’s territory or take over another’s are constant.

Be it in a supporting role, medical or, more recently, combat, women have long played integral roles in the battles the United States’ armed forces have waged.

In the country’s early years, several woman, disguised as men, enlisted to fight. Cathay Williams enlisted disguised as a man (William Cathay) in 1866, and was the only known woman to become a Buffalo Soldier.

U.S. military women have gone on to attain the highest honors and ranks in the military, including generals and admirals.

In our Salute to Service, running weekly leading up to Veterans Day, the Herald/Review will highlight several female U.S. military veterans. While everyone who serves or has served in the military has a story to share, we will take the time to honor a few of the many intrepid women who at some point in their military careers have spent time either here in Sierra Vista or on Fort Huachuca.

This is the sixth and final installment.

Each participant will highlight, in their own words, experiences from their service careers.