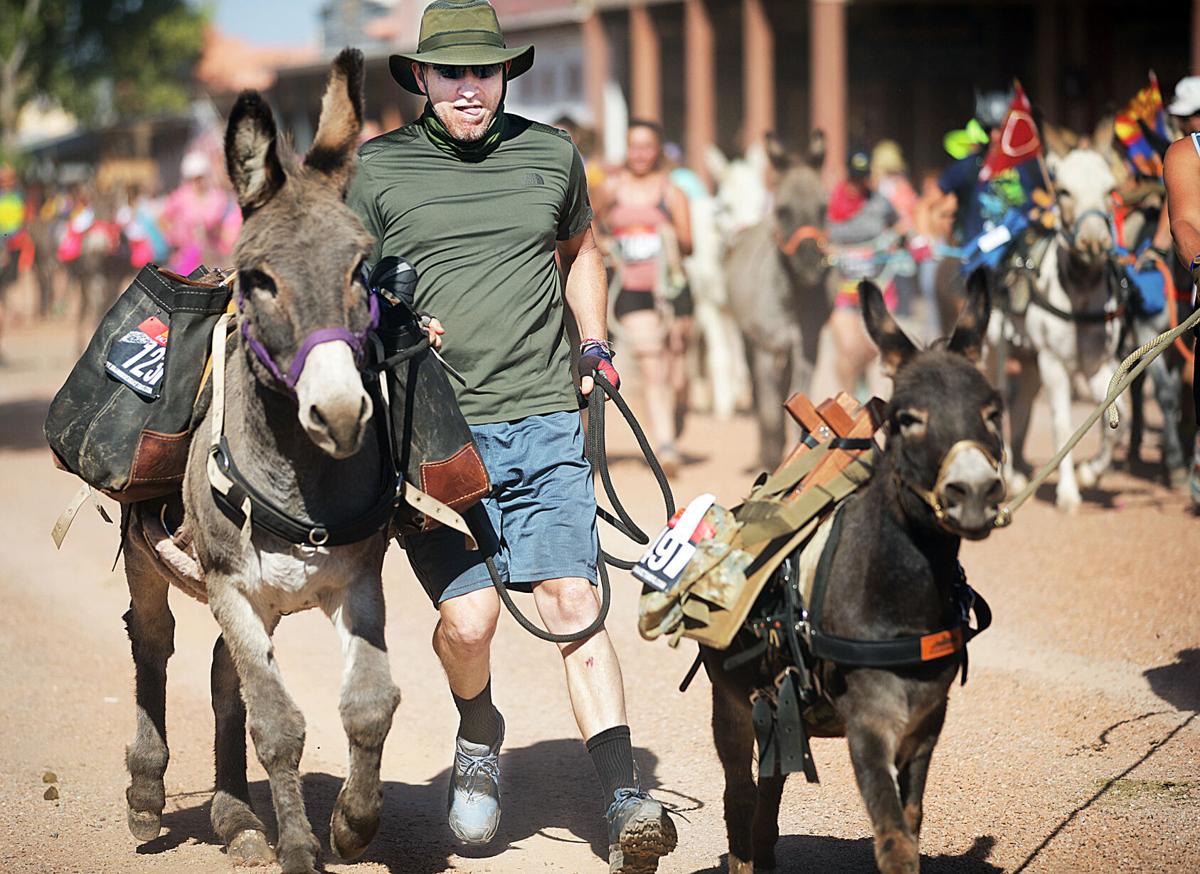 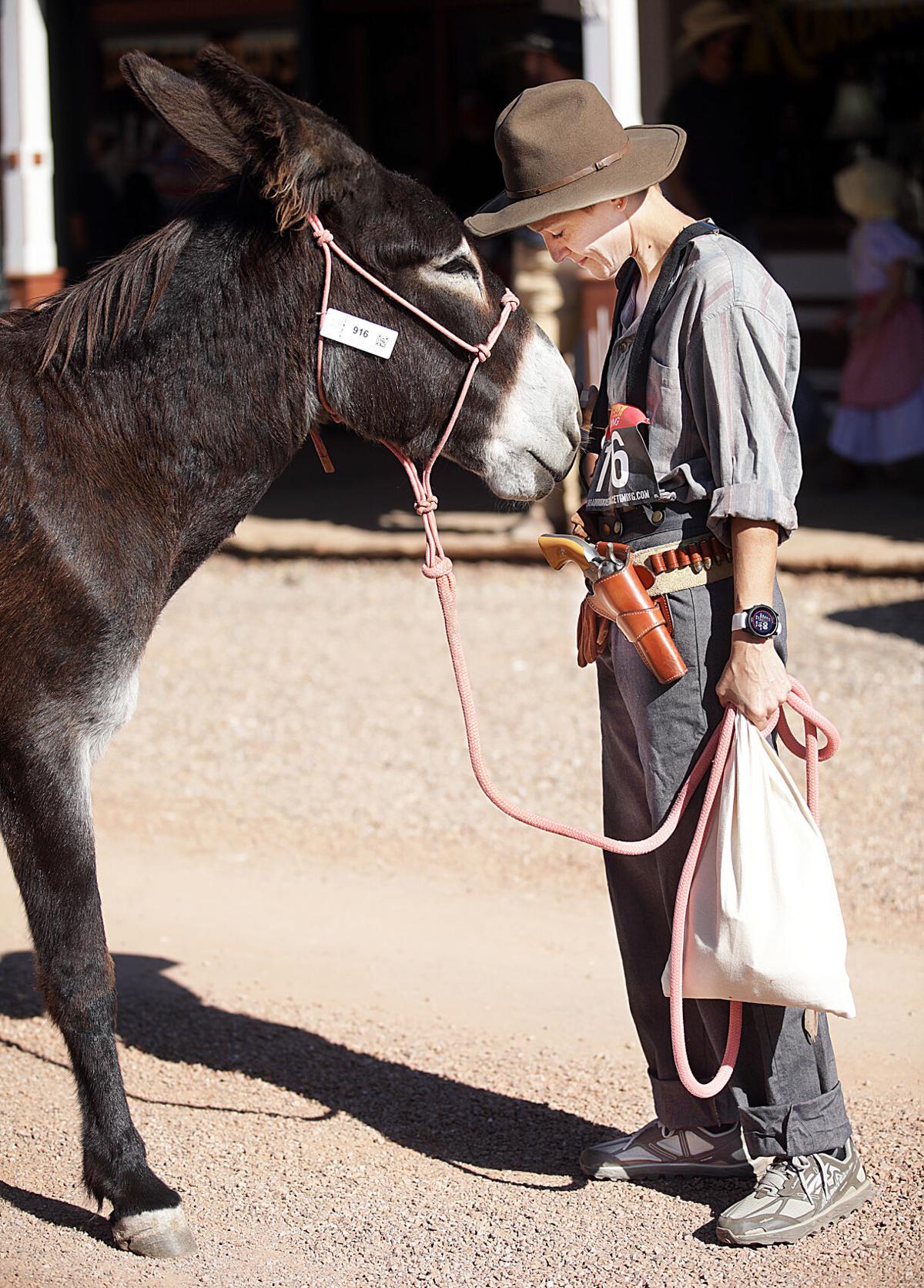 Dana Zygmunt and her burro Wednesday share a moment prior to competing in yesterday’s inaugural burro races in Tombstone. Zygmunt splits time between Tucson and Buffalo. 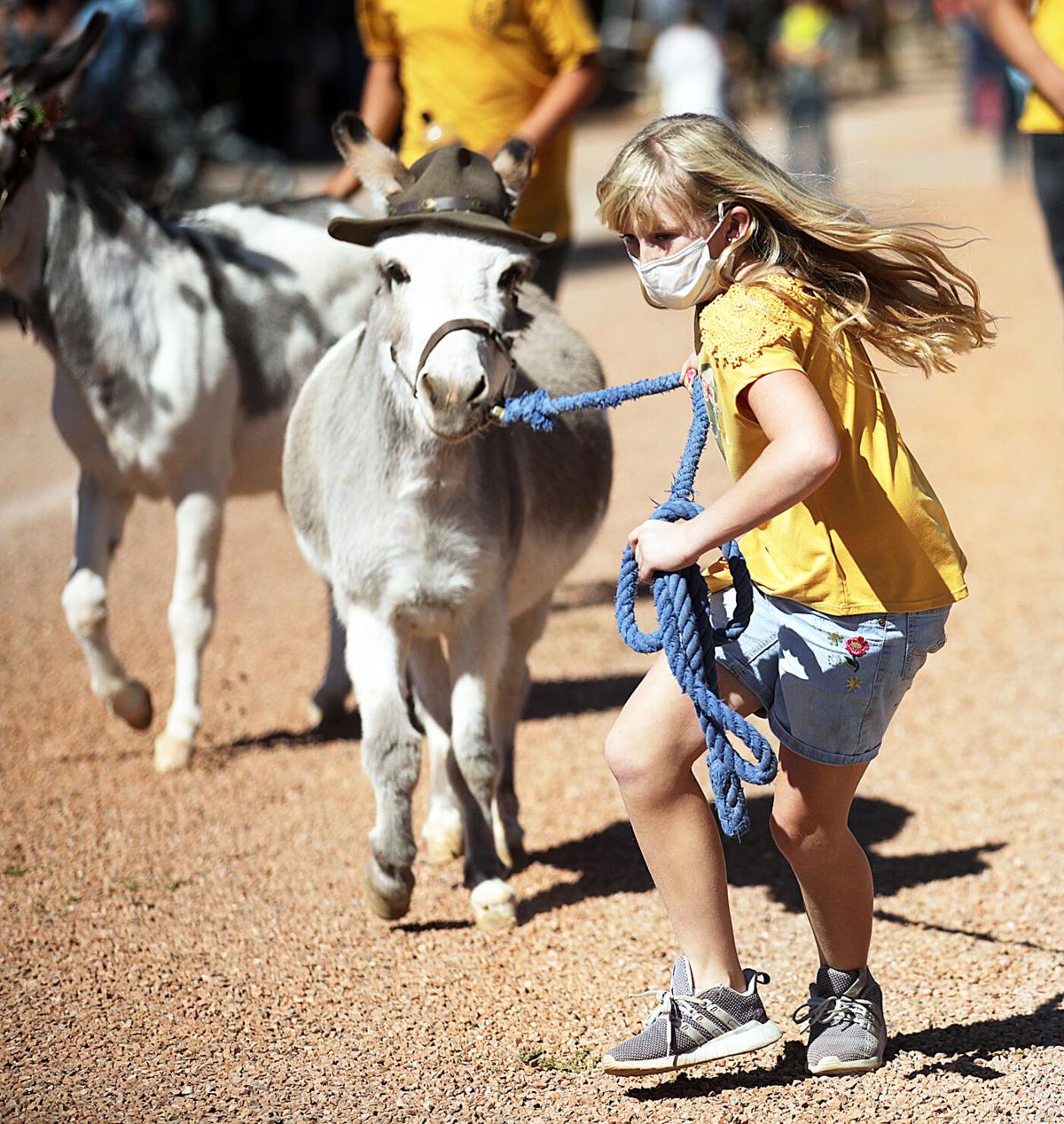 Eleven year-old Peyton Foster, from Las Cruces, participates in a burro sprint between 5th and 6th streets in Tombstone. 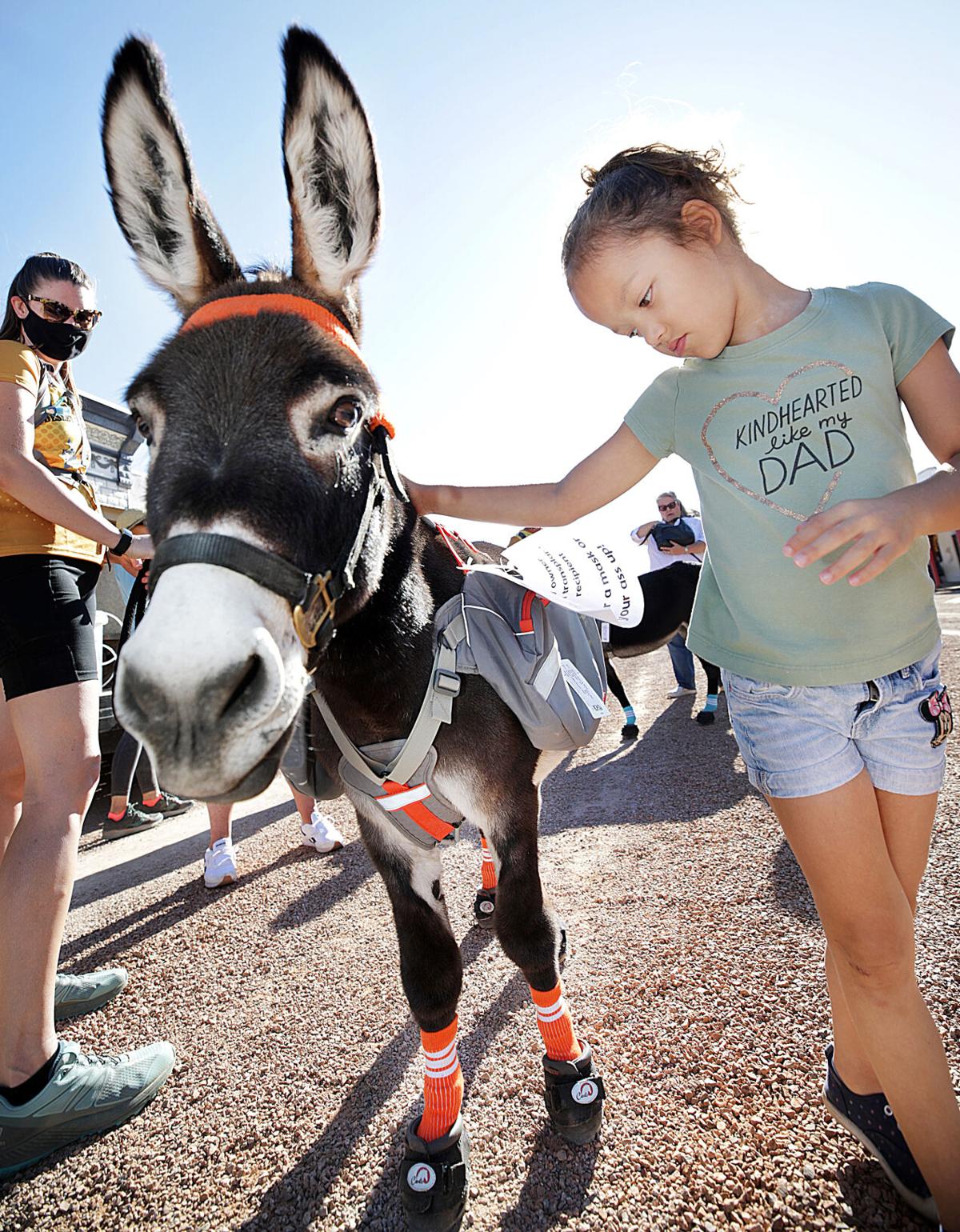 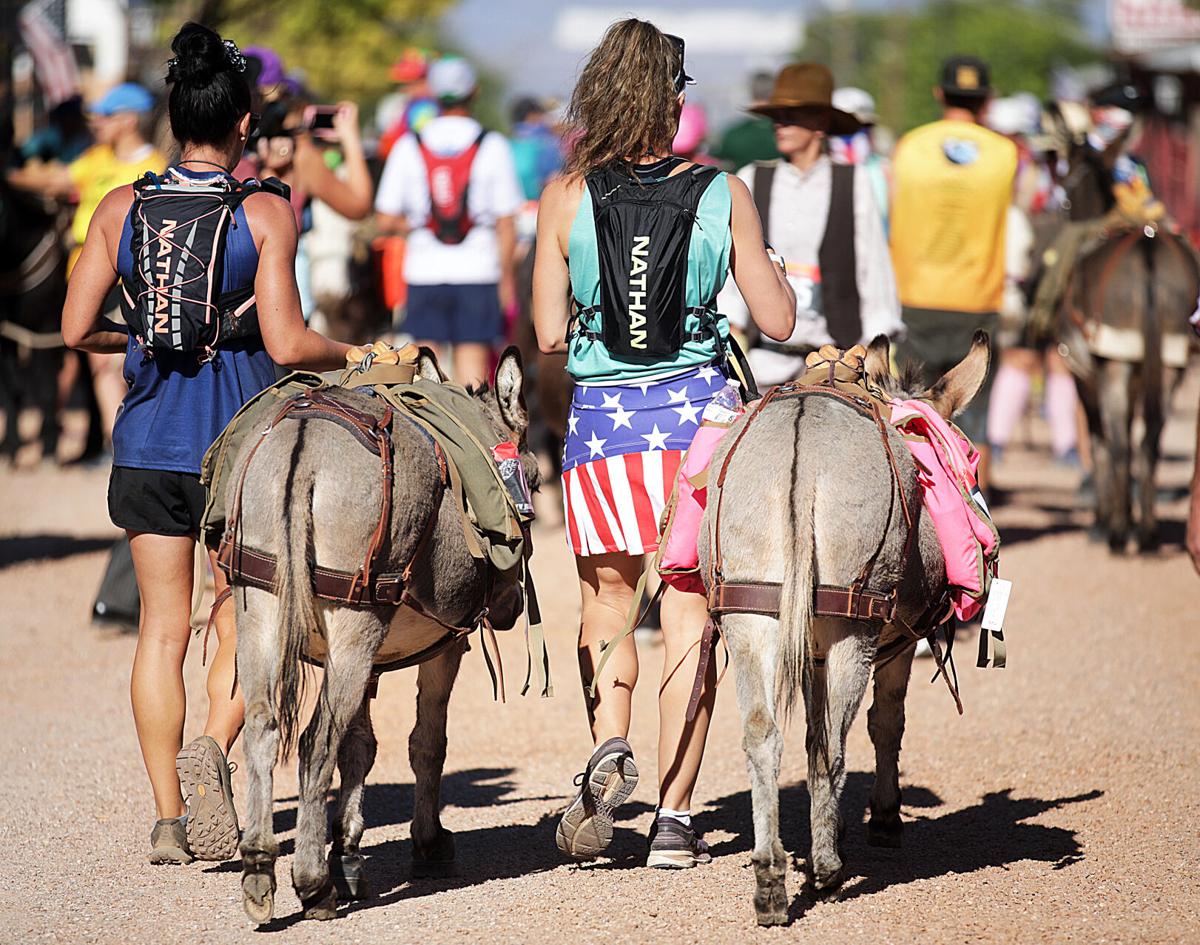 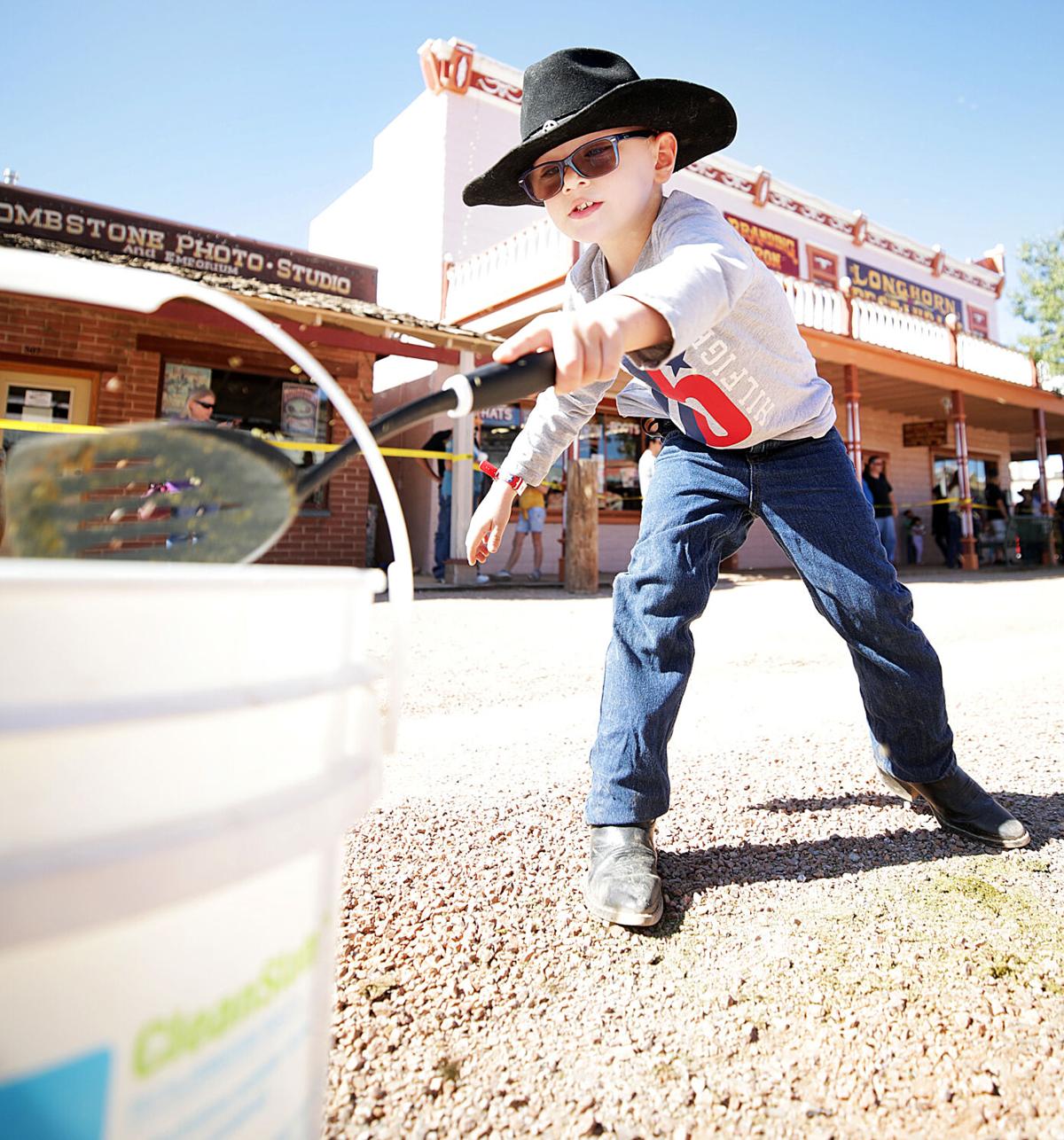 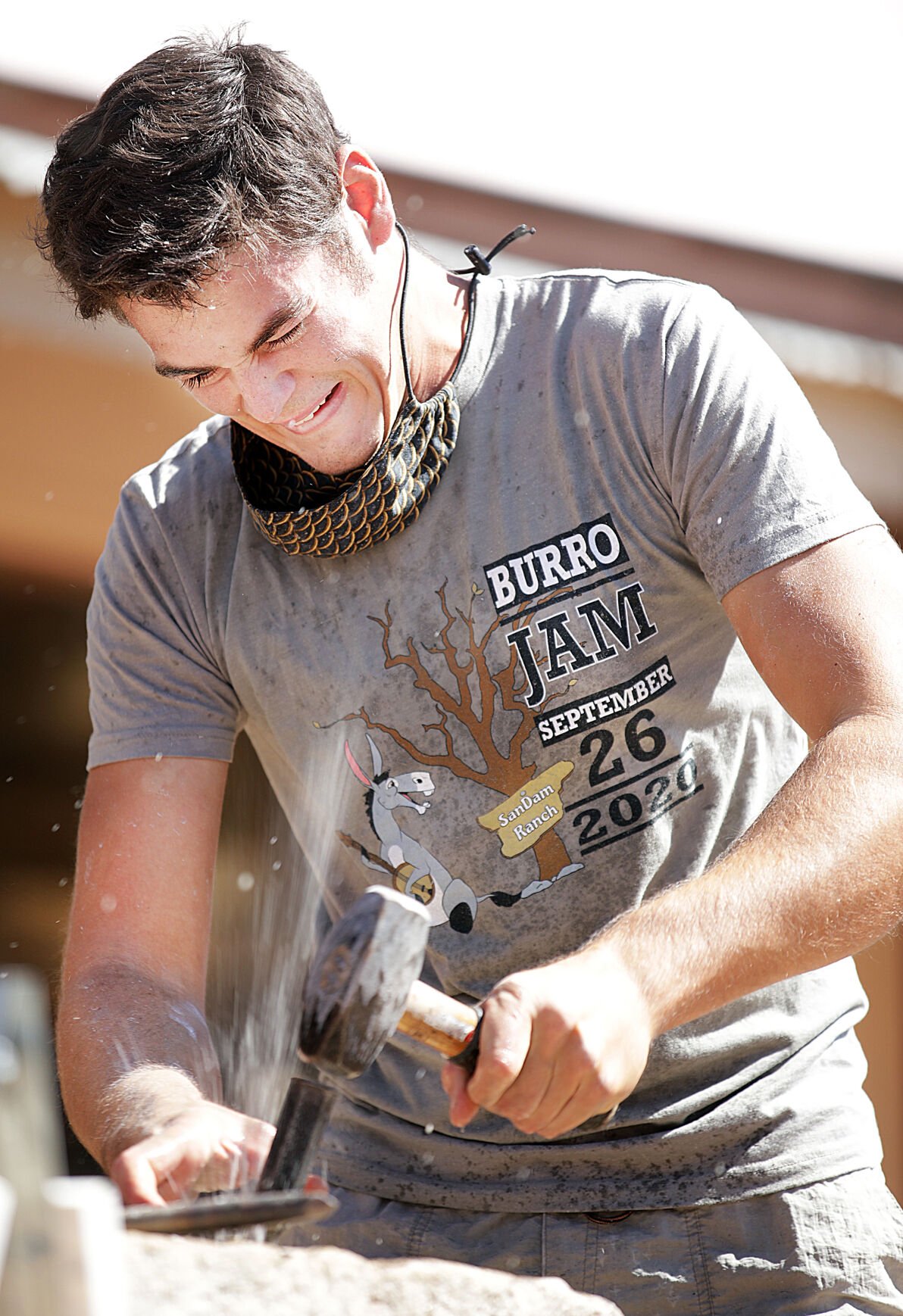 Hard Rock Drilling competitor Tyler McKee, from Phoenix, toils as he attempts his first try at the sport during yesterday’s installation of Schieffelin Days.

Dana Zygmunt and her burro Wednesday share a moment prior to competing in yesterday’s inaugural burro races in Tombstone. Zygmunt splits time between Tucson and Buffalo.

Eleven year-old Peyton Foster, from Las Cruces, participates in a burro sprint between 5th and 6th streets in Tombstone.

Hard Rock Drilling competitor Tyler McKee, from Phoenix, toils as he attempts his first try at the sport during yesterday’s installation of Schieffelin Days.

Dubbed the “Desert Donkey Dash” by organizers, some 70 teams from all over the country participated in one of three distances for the inaugural event, which served as anchor activity for the town’s Schieffelin Days celebration.

“We’re truly blown away by the town and we’re really impressed by how organized this event is,” said Susan Winters of New River, Arizona as she and her husband Dan prepared their four-legged running partners, Mocha Joe and Kahlua Kona, for their race.

“We’re brand new to this sport, and this is only our second race,” Dan Winters said. “Because we’re beginners, we’re doing the three-mile race, which is the shortest distance. After we get a few more races under our belt, we plan to start working up to some of the big events in Colorado.”

Brad Wann who represented the Western Pack Burro ASS-ociation traveled to Tombstone from Colorado to serve as the event emcee.

In welcoming the crowd to “Tombstone’s inaugural pack-burro race,” he described how the sport got its start in Colorado in 1949 as a revenue source when the state’s mining towns were drying up.

“Pack burro racing started in Fairplay, Colorado and have grown in popularity every year,” he said.

Now in its 72nd year, pack burro racing has become such a huge sport in Colorado, it was designated as Colorado’s state sport in 2012.

Matthew Schieffelin, a relative to Tombstone prospector and founder Ed Schieffelin, started the races by firing a gun.

Donkeys of all sizes — from tiny minis to standards to mammoths — trotted down Allen Street before heading into the mining hills of Tombstone. Some went willinging, with their human partners racing alongside, while others needed a little prodding and friendly persuasion.

While praising Tombstone for a smooth first burro race, Wann said he hopes to see the races continue in the old mining town.

“We would like to start a pack-burro Triple Crown like we have in Colorado,” he said. Wann also noted that several of the donkeys in the race were rescued from “killer trailers” and now have fantastic homes.

Suzanne Velasquez of Forever Home Donkey Rescue out of the Benson area was on hand to answer questions about the rescue organization.

“Seventeen of our donkeys are in the race,” she said. “We’re so pleased this event is happening in Tombstone, and hope they keep it going.”

While watching the start of the race, Travis Mattern, a sergeant with the Tombstone Marshal’s Office, referred to the event as “amazing.”

“The town needs something like this,” he said. “Tombstone is here because of mining, and this event is geared to mining. The donkeys are required to carry a pack saddle and mining equipment, so this is an ideal event to bring to town.”

While the burros could be seen weaving their way up into the mining hills of Tombstone, other activities took over Allen Street.

Children participated in mini donkey races, where they ran with a burro from Fifth and Allen streets, one block to Sixth Street, touched a sign, got their burro partner turned around and raced back.

Eleven-year-old Peyton Foster of Las Cruces, New Mexico was teamed up with Pepperoni.

The two turned in one of the faster times of one minute, 15 seconds.

“I’ve never been in a donkey race before today,” Peyton said. “It was fun.”

Some of the younger racers, like four-year-old Sienna Sanchez, ran with her grandfather, Jay Brainerd, who lives in Prescott.

Tilch made $50 for picking up over 18 pounds of donkey droppings in 10 minutes.

“I was born and raised here and have never seen anything like this before in Tombstone,” said Roger King. “This event is bringing people into town for a mining-related event, which is what Tombstone is all about. It’s been a fantastic event and I hope we keep it going.”