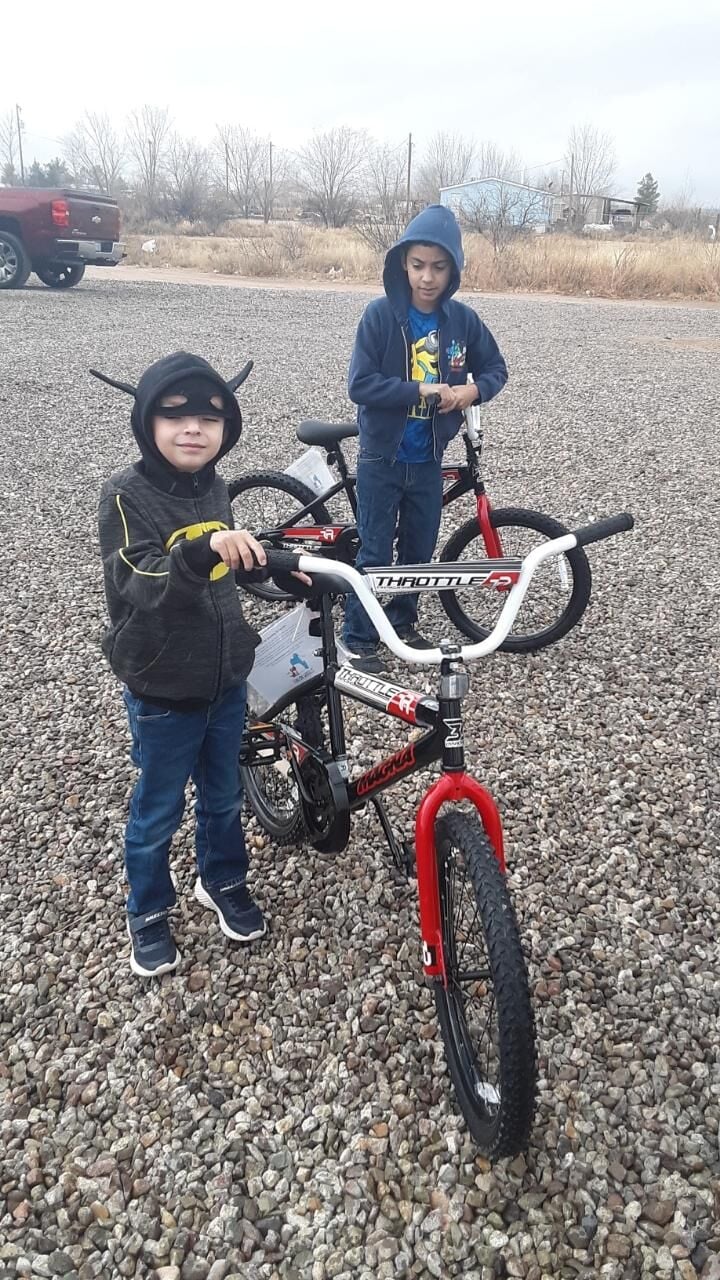 Ricardo Perez, left, 6, and Marcus Rodriquez, 9, pose with their new bikes that were donated to them by SEACAP of Northern Cochise County.

Bikes for donation to children living in the low-income community of Winchester Heights in Willcox. The bikes were donated by SEACAP of Northern Cochise County as part of a postponed Christmas event.

Employees from SEACAP in Northern Cochise County gather around bikes that they donated to children in the low-income Winchester Heights community.

Ricardo Perez, left, 6, and Marcus Rodriquez, 9, pose with their new bikes that were donated to them by SEACAP of Northern Cochise County.

Bikes for donation to children living in the low-income community of Winchester Heights in Willcox. The bikes were donated by SEACAP of Northern Cochise County as part of a postponed Christmas event.

Employees from SEACAP in Northern Cochise County gather around bikes that they donated to children in the low-income Winchester Heights community.

WILLCOX — As a postponed Christmastime event in remembrance of the late Librado Ramirez and Virginia Avila, Southeastern Arizona Community Action Program donated bicycles to children in the lower-income Winchester Heights community of Willcox on Jan. 24.

Ramirez served as Executive director of SEACAP for 40 years and Avila was Regional Coordinator of Northern Cochise, Graham and Greenlee counties for SEACAP for 30 years. Ramirez passed away about four months ago and Avila passed away on Dec. 21.

“Originally we were going to do it in remembrance of Librado Ramirez, because he was born and raised in Willcox,” said Sally Barba, SEACAP/CASE Manager for Graham, Greenlee and Northern Cochise counties. “He was our executive director for many years. When we lost Virginia we chose to do it in remembrance of both of them, because this was her project that she was working on.”

In partnership with Walmart, SEACAP donated 63 bikes to children ages 1-11.

“We go through Walmart,” Barba said. “This is what we’ve done in the past. This year we actually had to order online, I think through Walmart, but normally we try to use the local Walmarts in our counties.

“When we need this amount, normally we give them a heads up and then they can get it to us, but this year it did take a little bit longer. We sent the bikes out with helmets. Then we gave them a Christmas candy bag.”

According to Barba, every bike that was donated was purchased by donations from SEACAP staff, family and friends.

“This is the first time that we didn’t donate to an actual school,” she said. “Cause normally in the past we’ve done schools and head starts. This is our first time we did a little community. A very low-income community.

“We were shocked to bring about 20 bikes back. In order to receive the bike, they had to be present. The kids had to show up.

“I don’t know if it was due to the weather. The parents didn’t want to bring them. I know one family was out of the city. They were in, I think, Yuma. I don’t know if it’s because we had to reschedule the date also.”

The bike donations were scheduled for around Dec. 20, and then COVID-19-related complications arose before the death of Avila. She originally had the idea to donate the bikes to Winchester Heights. SEACAP had used the community center building to do its income taxes and became more familiar with the community.

“About six of the staff got COVID, so we were shorthanded and then we lost Virginia,” Barba said.

SEACAP partnered with Yazaida Esquilin of the Winchester Heights community center to get a list of children.

According to Barba, most of the children reacted to receiving a brand new bike in a happy manner, while some were confused as to what was going on.

“I have some pictures of kids happy,” she said. “Some kids weren’t really sure what was going on. So I don’t know if it was more of a shock, like was I supposed to get the bike? All in all, we actually had a couple of kids drive their bike back around to the community center after they left.

“We had a couple of kids that had the virus, so some couldn’t come because of that.”

Over 15 years Graham, Greenlee, Cochise and Santa Cruz counties have received bike donations on a yearly basis. The donations are usually given to schools and small communities.