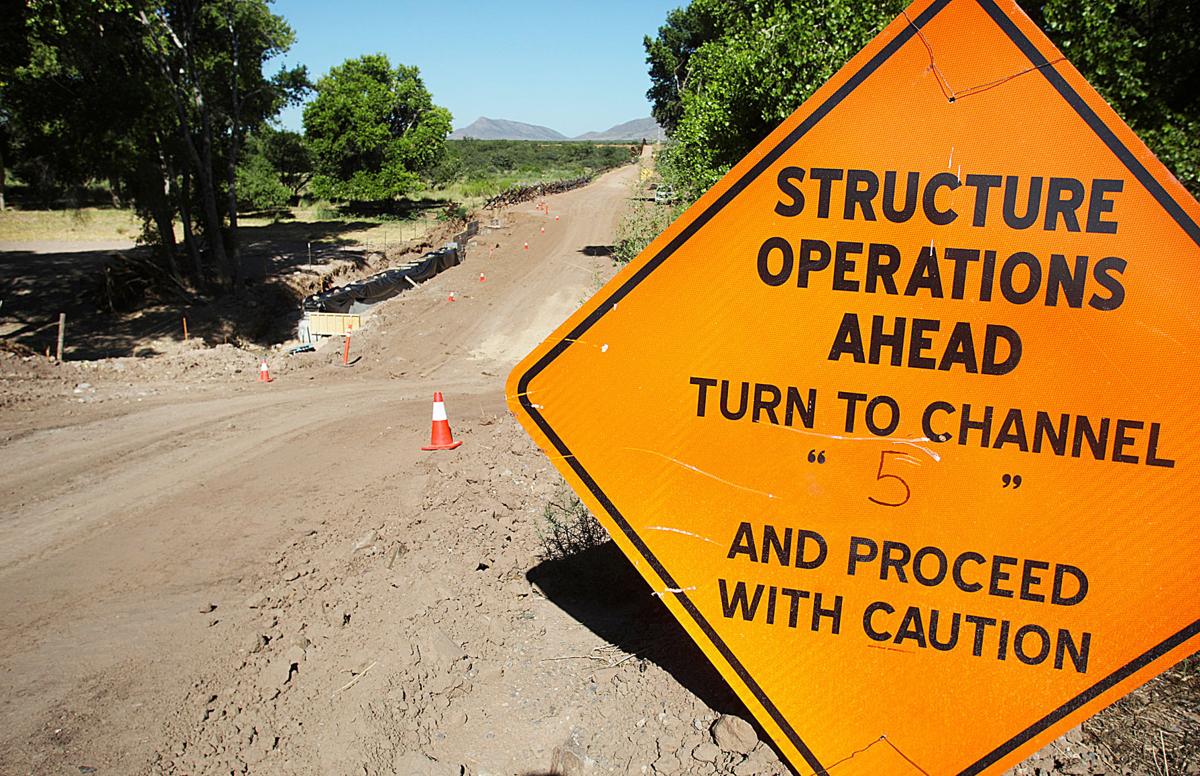 Construction is at a halt for this weekend’s holiday where the San Pedro River and the United States/Mexico border intersect. Concrete footings, which are covered, can be seen on the left next to the river. 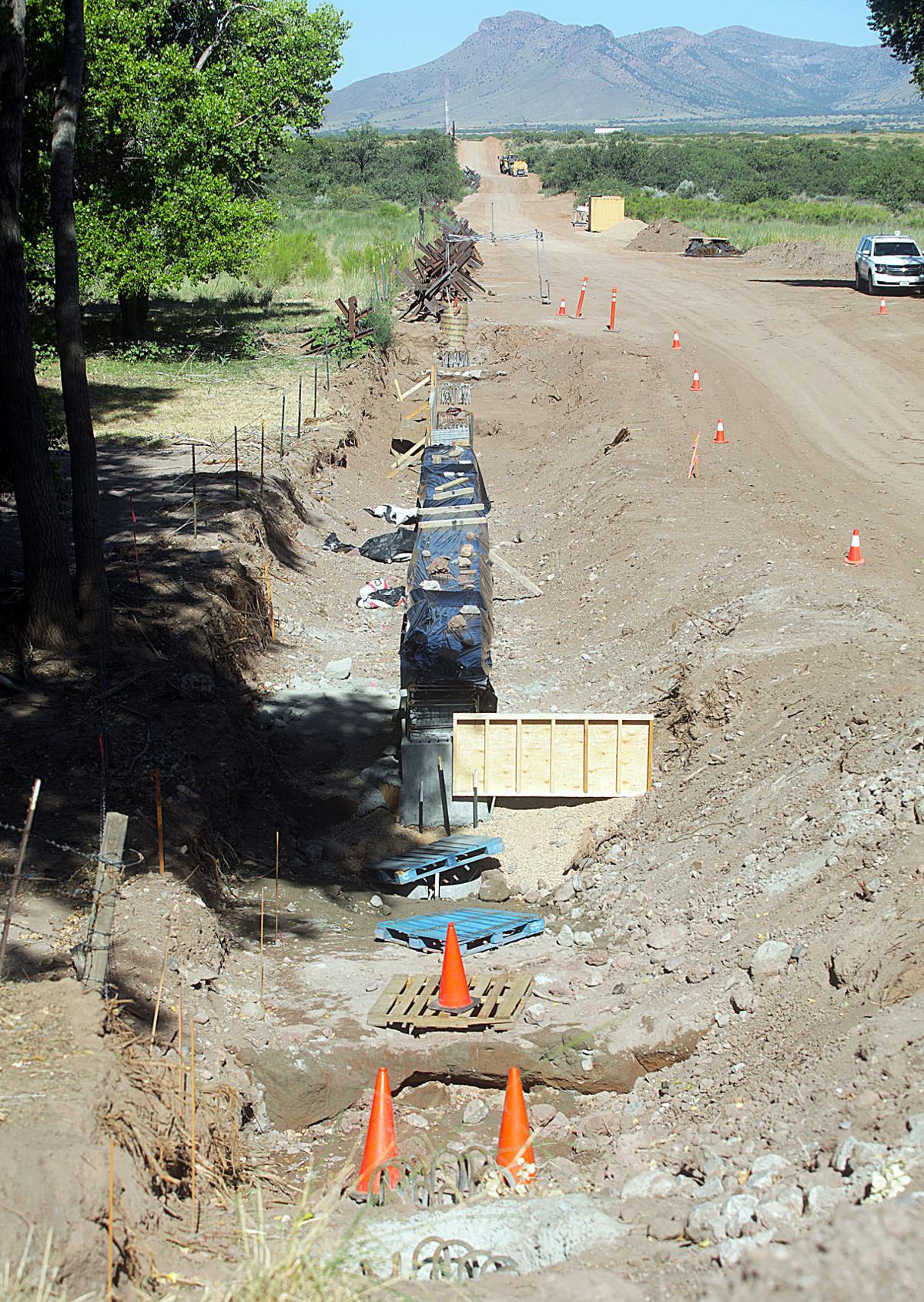 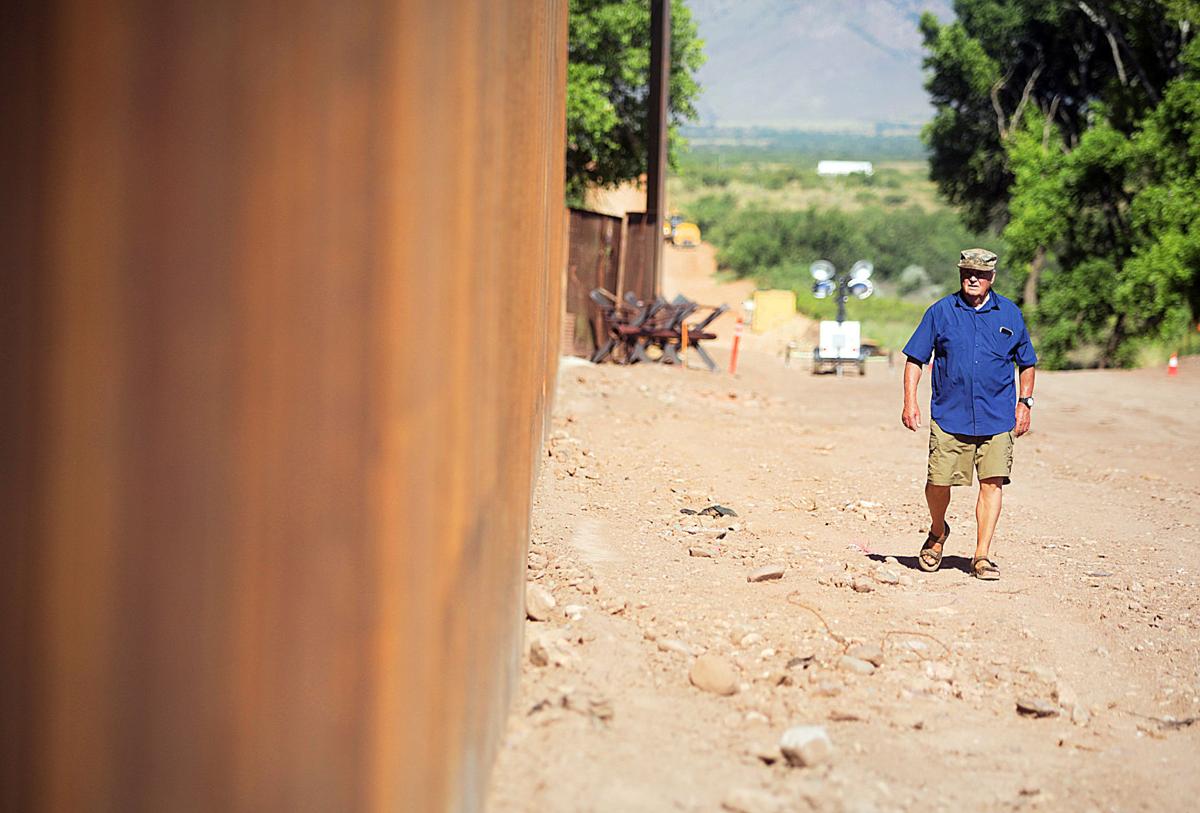 Area resident and SEIDARM creator Glenn Spencer walks along newly constructed border fencing just east of the San Pedro River on Friday. Cottonwoods can be seen behind Spencer which are located along the river. 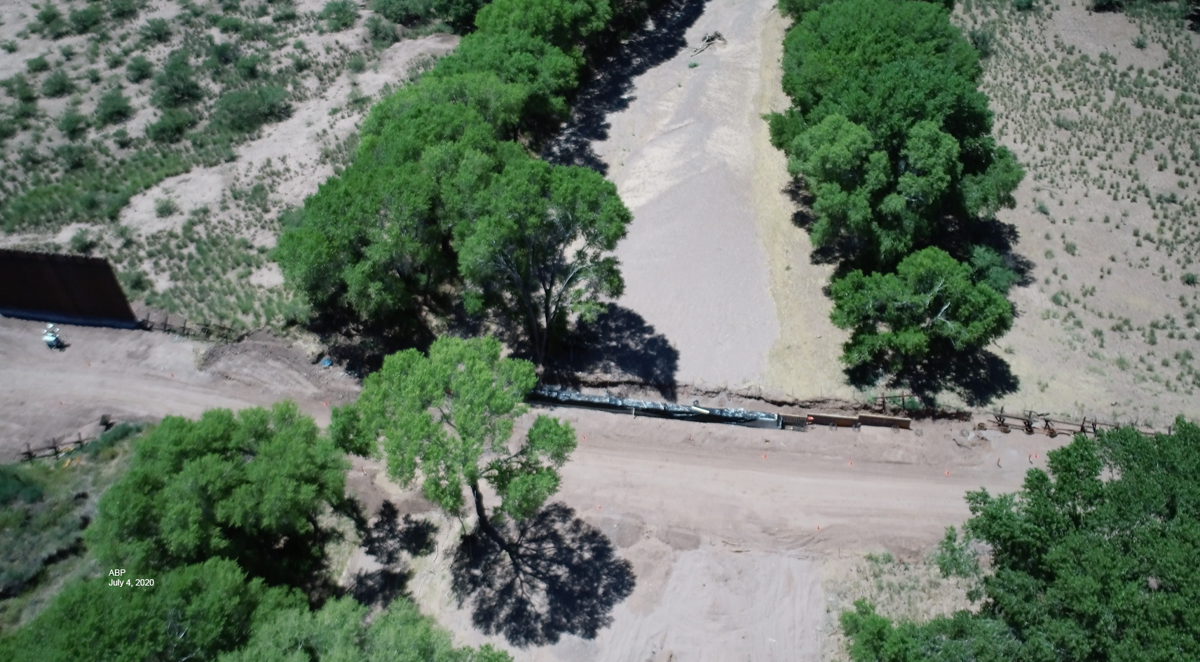 The aerial view of work in progress in the San Pedro Riverbed looking south. 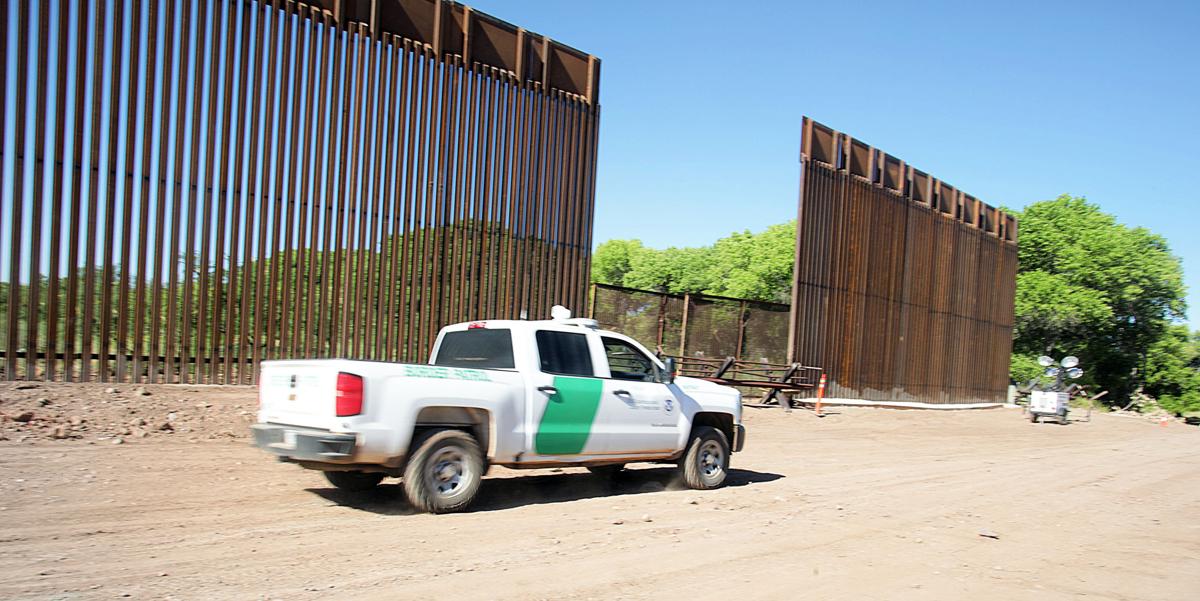 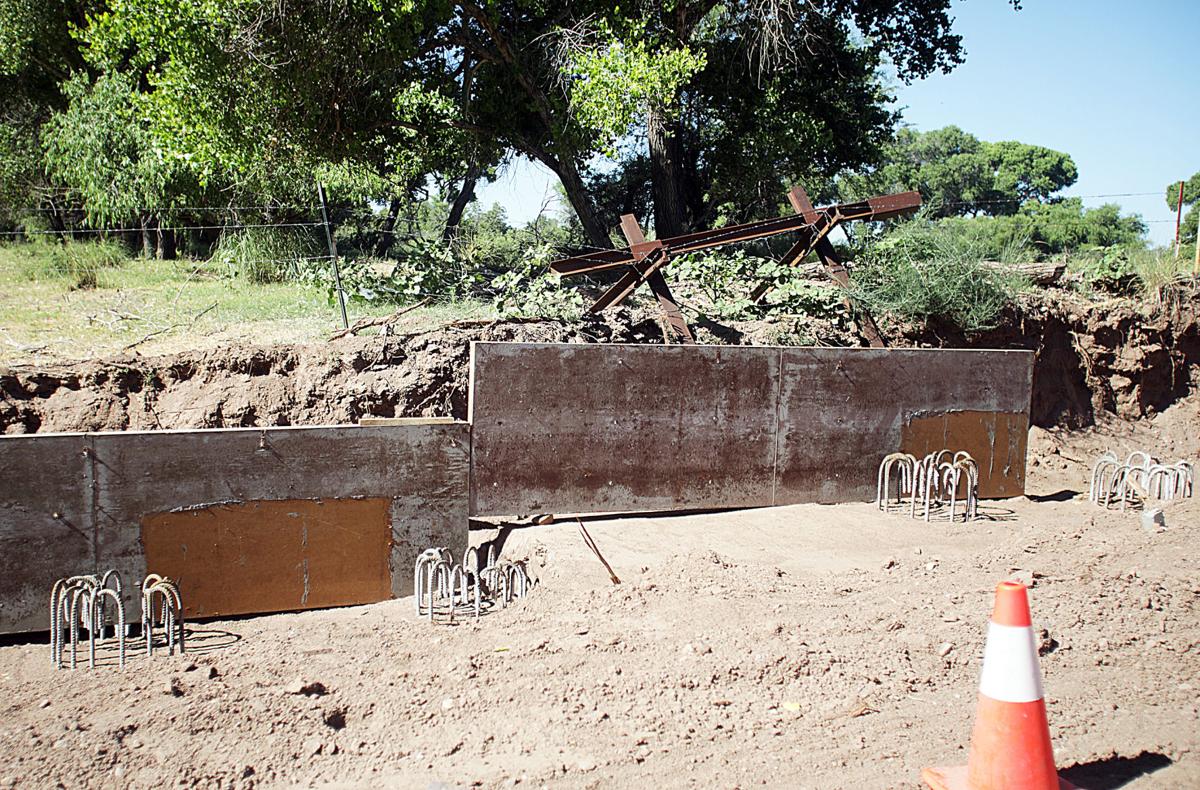 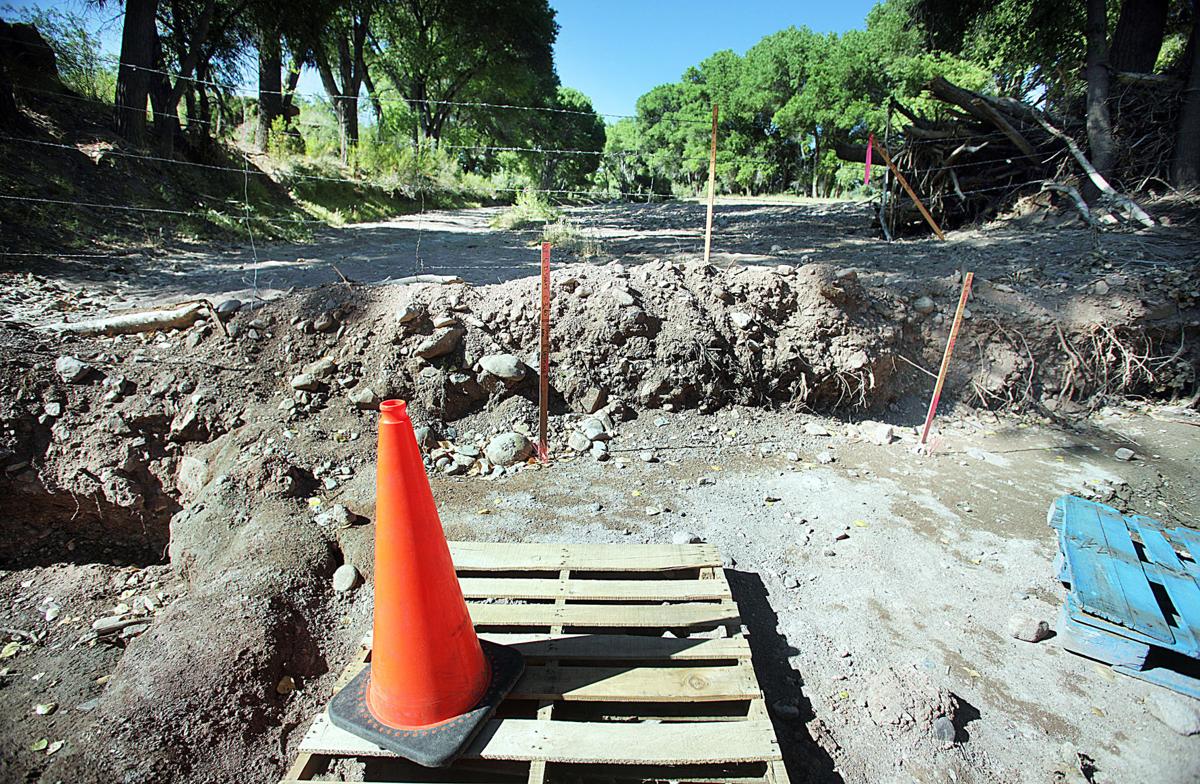 Construction is at a halt for this weekend’s holiday where the San Pedro River and the United States/Mexico border intersect. Concrete footings, which are covered, can be seen on the left next to the river.

Area resident and SEIDARM creator Glenn Spencer walks along newly constructed border fencing just east of the San Pedro River on Friday. Cottonwoods can be seen behind Spencer which are located along the river.

The aerial view of work in progress in the San Pedro Riverbed looking south.

SIERRA VISTA — “Customs and Border Protection (CBP) continues to place a high priority on interaction with, and feedback from, federal agencies, tribal governments, local officials, landowners and community members about border barrier projects, and has consistently strived for a transparent process.”

The CBP offered community organizations, scientists, activists and the general public a chance to express their views on the construction of the border wall through the San Pedro Riparian National Conservation Area and the San Pedro River. For two months, April and May, people were allowed to comment and the comments were to be taken into consideration for the design plans of the barrier.

However during the June stakeholders’ meeting with Gabriel Guerrero, acting assistant chief Border Patrol (BP) agent Tucson sector, Roy Villareal, BP chief patrol agent for the Tucson sector, Michael Hyatt, BP patrol agent in charge of the Terry Bryant BP station and Paul Enriquez, acquisitions, real estate and environmental director for the BP’s infrastructure portfolio, the former stated intentions of “high priority on interaction with and feedback from” all the affected and concerned parties seemed inconsequential to the selected design of the massive project.

For Jeff Sturges and Liz Lopez, the citizens who organized Hands Across the River, which engaged hundreds of people who care about the San Pedro River in a peaceful assembly back in January, felt the effort had been ignored by the federal government. Their demand was the river and national conservation area be protected and no structure be built across the river at the border.

Enriquez said legal waivers were granted in 2019 by acting Sec. of the Department of Homeland Security (DHS) Chad Wolf “to ensure expeditious construction of the barriers and roads.” However, certain steps were followed such as stakeholder involvement, complete cultural, natural and biological resources surveys were done and analyzed for impacts and stakeholders were allowed the opportunity to review the surveys. Then an environmental stewardship plan was prepared and monitors would ensure the implementation of those plans and best management practices and report any deviations.

The U.S. Bureau of Land Management offered specific concerns about the historical floods, sediment and debris buildup along the barrier, added Enriquez.

The designThe first design, a series of culverts with bollards on top and with drop gates installed across them in the riverbed was rejected and deemed “not feasible and insufficient to handle the flow,” he continued. So, the contractors came up with a new design.

The 30-foot bollard wall, with lighting, will be constructed across the riverbed and floodplain 10 feet inside the border line. Swing gates, each eight feet wide and six feet tall, will be installed and will be left open during the monsoon to allow for debris and flood water flow.

A bridge with a 550 foot span will then be built nine and a half feet north of the wall. This distancing will allow the removal of debris buildup both in the area south of the wall to the border and on the south side of the bridge.

Enriquez said the design was based on data from the Army Corps of Engineers, contractors and stakeholders.

Hyatt said BP agents would be responsible for the opening and closing of the gates.

Millis took issue with the lack of Native American tribes from the stakeholder’s meeting who would suffer impacts to their historical and cultural heritage. He also told the team he had heard of the illegal removal and sale of protected saguaro cacti by contractors.

Villareal asked Millis to please forward any such information to him so that proper action could be taken.

Millis told him the information had already been sent to the state office. He also asked how many monitors were on the construction sites to keep an eye on contractor failures to follow best management practices and the environment stewardship plan.

Enriquez said there was one monitor at every construction site.

Wildlife concernsTraphagen asked why no one had contacted him as much research on the San Bernardino wildlife refuge in southeastern Cochise County and area comes through him. The group has researched the area for decades.

“I’m skeptical of the process,” said Traphagen. “I’m surprised to hear of this stakeholder engagement with no consultation with us. I believe it’s disingenuous.”

Traphagen went on to say that in regard to a segment of critical jaguar habitat, he would appreciate for CBP to reach out to him and other local and wildlife experts in that area for further considerations. As of Friday, July 3, no one from the CBP has contacted him.

Gregory was curious about the limited number of small wildlife accesses through the wall and why there was no consideration for the larger wildlife, like javelina, ocelots, deer and jaguars whose migration and mating habits do not necessarily coincide with the monsoon when gates would be open.

As it stands, Enriquez said there will be 50 eight and a half inch by 11 inch wildlife openings across the entire wall in Arizona at different places suggested by federal agency partners. None of the plans include larger wildlife migration openings, but the team told the listeners opening could be incorporated in the barrier. The National Park Service and Fish and Wildlife Service could provide information to the CBP “that works from a border security standard.”

Gregory said in an interview, “They had to have a public meeting, but it was all for show. It was obvious the local BP agents were not in the loop. It’s all out of Washington, D.C.”

Hyatt and Villareal did say in the meeting, they heard what was going on through the media or when station commanders were notified construction would begin.

Villareal said, “We’re frustrated we’re not in the loop. It’s presented ongoing issues with us.”

Sturges said in an interview, “It’s my opinion that anything they build across the river to stop people will stop wildlife. What they devised is absurd.”

He also questioned the rationality of the swing gates which would be open June through September during the monsoon and during other times of flooding.

“They’re doomed to fail. I’ve seen 30 foot trunks of tress come don the river during floods. They will destroy the structure,” Sturges added. “And considering these gates will be open one fourth of the year, it means we’re paying millions and millions of dollars for something that will not work all year long. It boils my blood when our own locally elected officials won’t speak out against it.”

Borer told the Herald/Review the CBP presentation did not go into enough detail on what was planned across the river. He requested a more detailed architectural rendering be provided for the project he was told would start mid-July, but already had extensive work has begun.

“I think they were trying to appease the groups and let them ask questions,” said Borer. “I pushed for a public meeting earlier this year, but then COVID–19 caused shutdowns and travel restrictions. I think this virtual meeting was the best they could do.”

The problem for the county, he pointed out, is the 60 foot corridor from the border north is owned by the federal government and the county has no say in what is done on that land.

“I feel like we’re stuck between the jaws of an alligator. We’re trying the diplomacy approach. The best thing I can tell people is the bollard wall and bridge will be built. This is what we’re going to get,” stated Borer.

The Herald/Review awaits responses from legislators, federal agencies, conservation organizations and the CBP.

This is the first in a series of stories on the wall, civil suits and funding.

HEREFORD — Border resident Glenn Spencer, and creator of a unique surveillance technology called SEIDARM, took Herald/Review photographer Mark Levy down to the construction site at the river since all routes in are now gated and locked.

Spencer was amazed at the size of the project.

“It’s enormous,” he said. “An enormously expense for something that will be open three or four months out of the year. And, there’s no question it will change the flow of water and cause flooding and erosion and sediment buildup.

“The BP agents will still have to be down here physically when the gates are open 24/7 just like they are now. It’s a waste of money. I doubt it will work.”

His SEIDARM technology senses footsteps through seismic waves from a special underground cable and remotely can start up drones to provide BP agents information on where and how many illegal immigrants and drug smugglers are trying to cross at a cost far, far less than the millions of dollars it costs to build the wall.

Stakeholders concerns with the border wall across the San Pedro River

The lighting of the border wall at night could inhibit wildlife movement for some species and attract flying species that may collide with the fence or become disoriented.

The structure could alter the natural waterflow of the San Pedro River.

Water used for construction concrete would affect groundwater and subflow and should be limited.

The structure could contribute to flooding due to debris buildup.

Flood gates would need to be opened in a timely manner not just during the monsoons.

Impacts to bird habitats with the land clearing and tree cutting to build the wall.

There will be visual impacts as the wall will alter the beauty and natural scenery of the area.

Historical wildlife migration between Mexico and the U.S. will be negatively impacted by the border wall.

His drone snot taken on Saturday, July 4, shows just how the work has progressed.