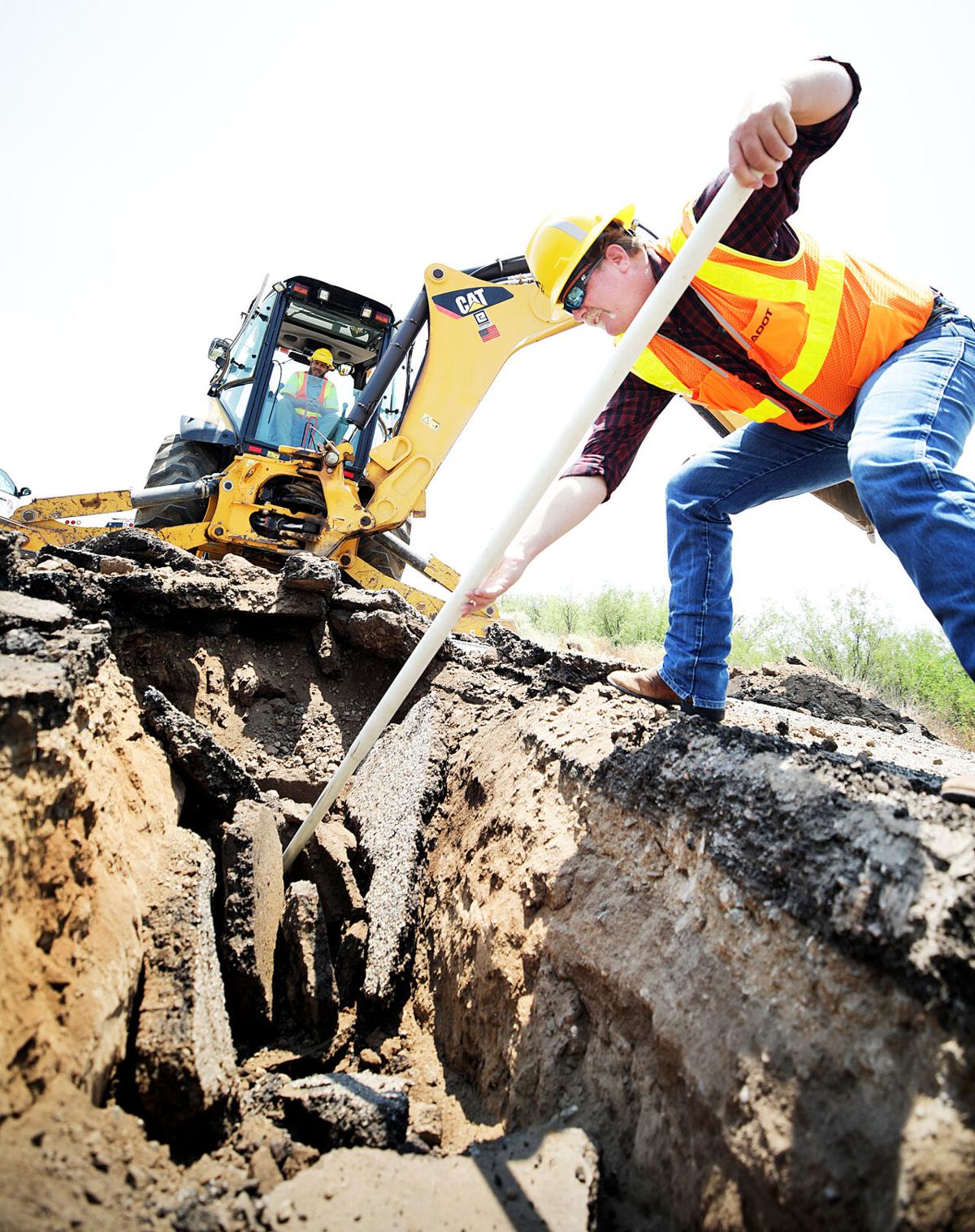 ADOT Southeast Superintendent Ty Cranford measures the depth of a fissure on U.S. Route 191 south of Willcox near Sunsites last week. ADOT had to close a portion of the highway so it could assess road rehabilitation due to soil erosion. 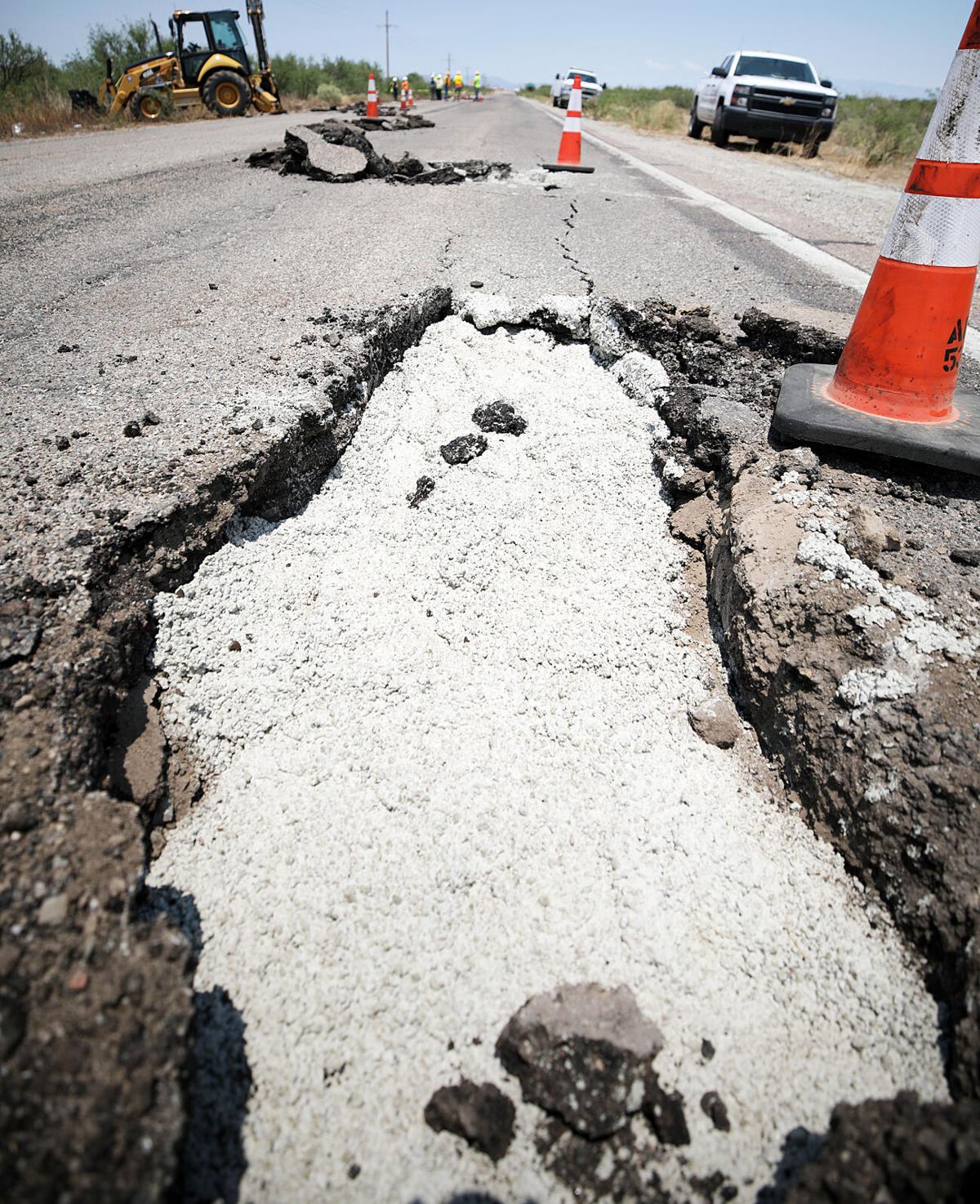 A hole dug where a fissure was exposed has been filled as ADOT surveys a stretch of U.S. Route 191 near Sunsites. 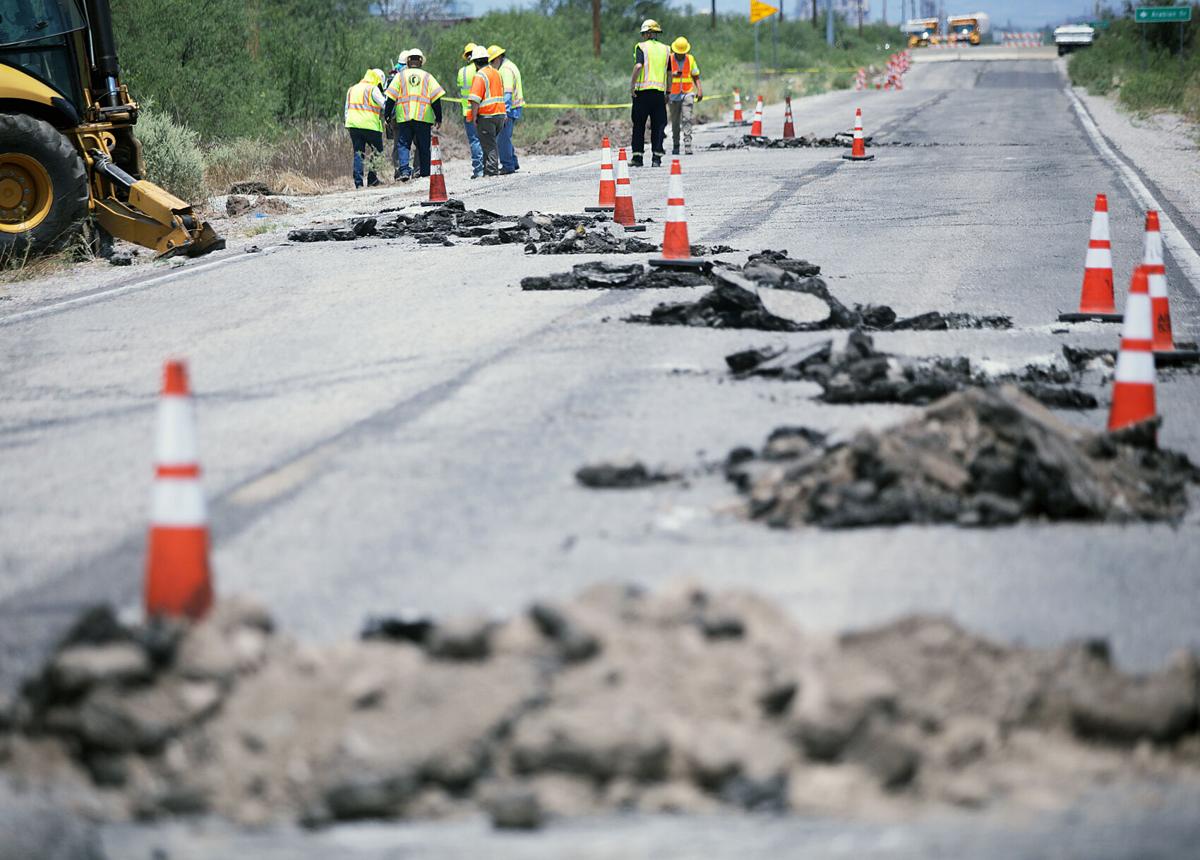 Several exploratory holes have been dug on the highway where soil erosion has occurred. 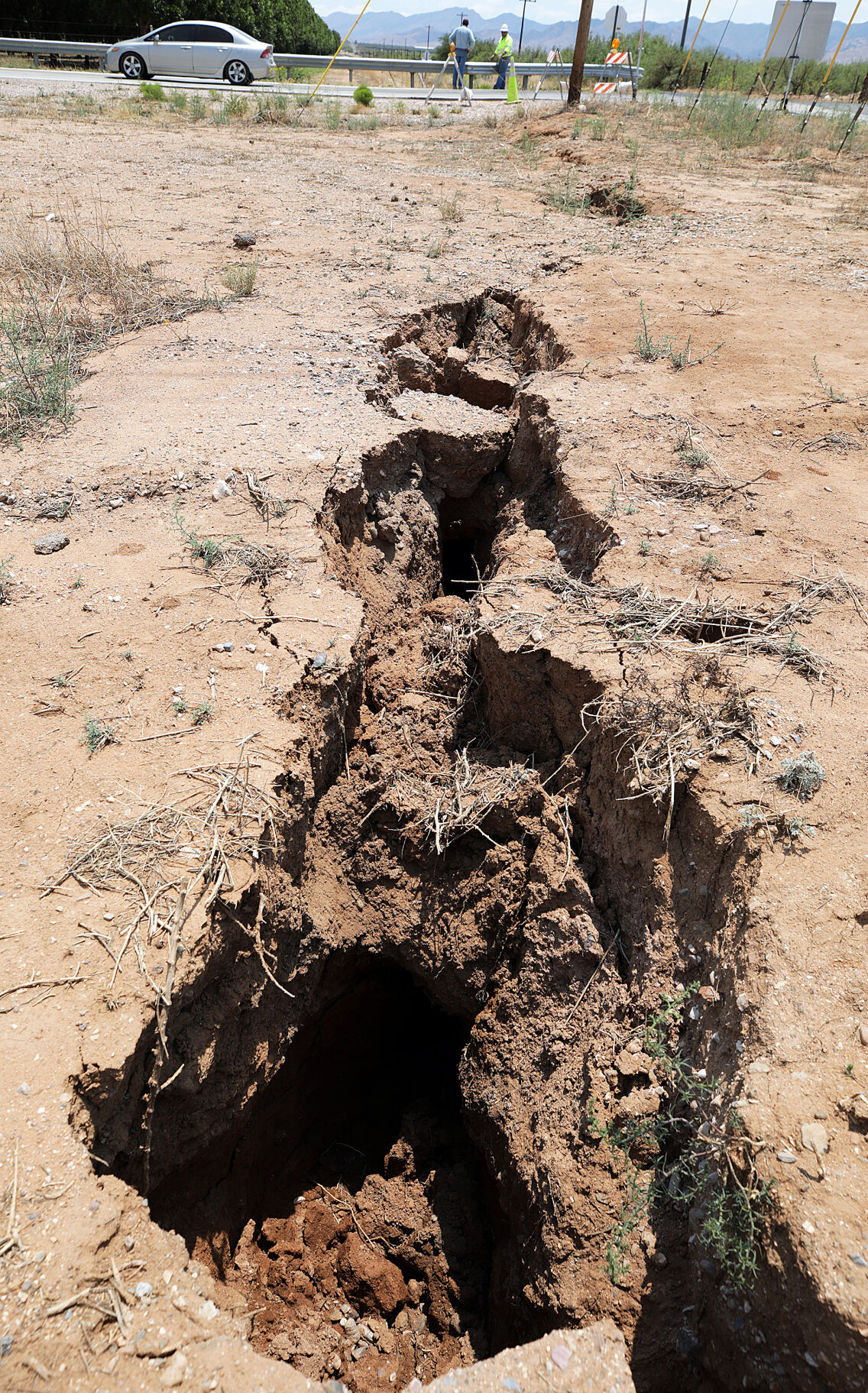 One of countless fissures, this one near Cochise Stronghold Road, as it appeared Thursday. 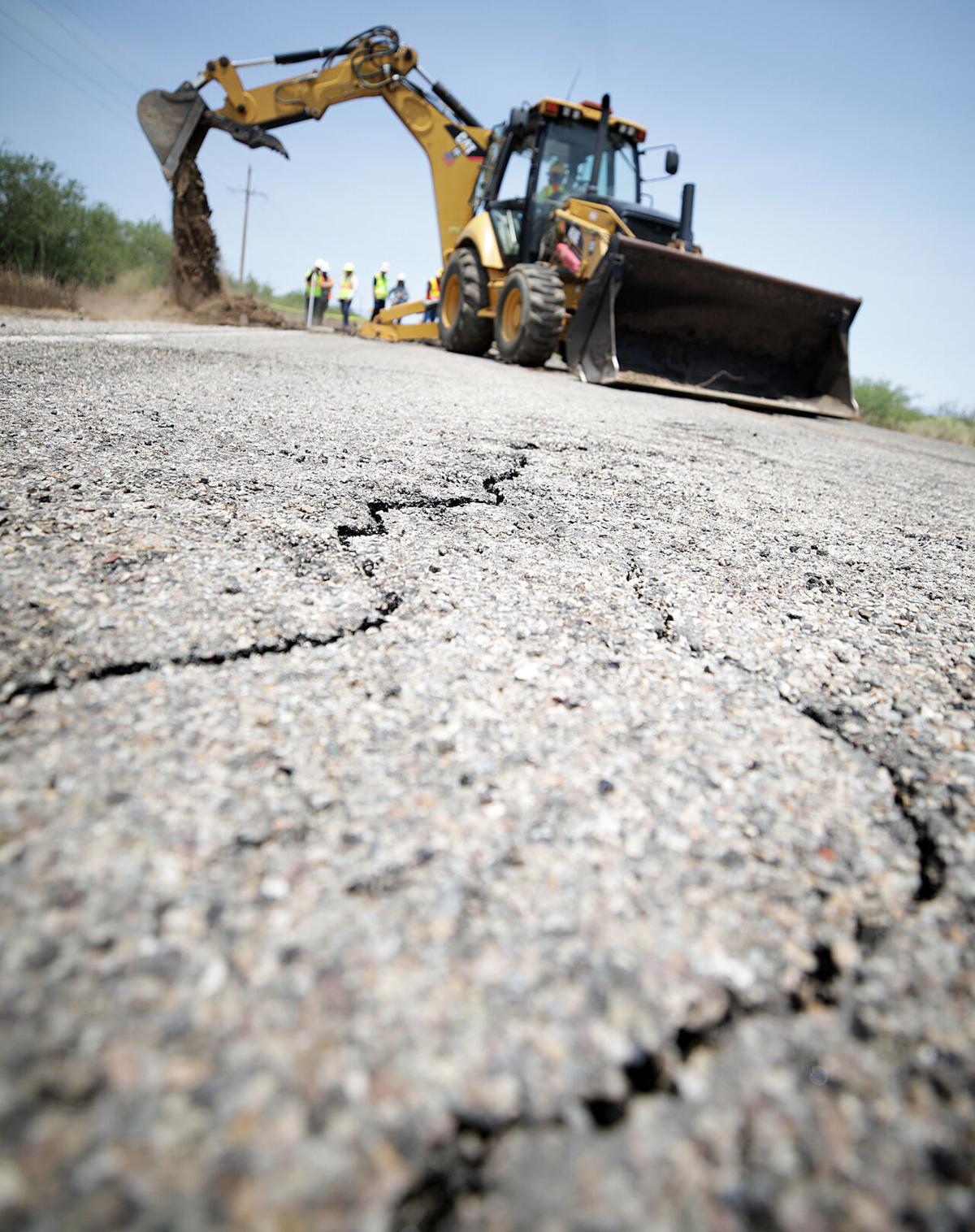 Are these cracks on U.S. Route 191 due to soil erosion? Work to repair the highway goes on in the background near Sunsites.

ADOT Southeast Superintendent Ty Cranford measures the depth of a fissure on U.S. Route 191 south of Willcox near Sunsites last week. ADOT had to close a portion of the highway so it could assess road rehabilitation due to soil erosion.

A hole dug where a fissure was exposed has been filled as ADOT surveys a stretch of U.S. Route 191 near Sunsites.

Several exploratory holes have been dug on the highway where soil erosion has occurred.

One of countless fissures, this one near Cochise Stronghold Road, as it appeared Thursday.

Are these cracks on U.S. Route 191 due to soil erosion? Work to repair the highway goes on in the background near Sunsites.

SUNSITES — Tuesday, during a cleanup response to debris on U.S. Route 191 after heavy rains north of Sunsites, the Arizona Department of Transportation discovered a number of problems with the highway due to erosion and fissures and closed a portion of it to traffic in both directions.

Garin Groff, ADOT public information officer, said the closure came after crews saw extensive erosion next to the roadway and up under the pavement. Upon further evaluation, it was decided to close the portion of US 191 from just south of Birch Road north to Dragoon Road as a precaution until all affected parts of the roadway can be examined.

Thursday, ADOT’s Geotech team was out surveying the highway to evaluate the damage, Groff said. They opened additional areas of the pavement to ensure erosion or fissures have not created dangerous spots. The team is experienced in erosion and other issues that can affect roadways.

“We do have a good understanding of the extent of the problem and now we know how to move forward,” Groff said. “We know there’s going to be a fair amount of repair work done, but we don’t know how long it will take yet. So, the closure is indefinite. Work will continue through a portion of this month.”

It will take a concrete slurry to fill any voids and then after it sets, new pavement will have to go down, he explained.

“We’ll be working as quickly as we can to minimize the disruption to travelers,” Groff said. “We have to make sure it’s safe before we reopen the road.”

For the foreseeable future, traffic will continue to be rerouted.

“We’re lucky we have good roads nearby for the detour, which create minimal delay,” Groff said.

However, Cochise resident Mark Spencer had a few photos of what appeared to be sinkholes and expanded fissures along Dragoon Road at the intersection with Cochise Stronghold Road.

While Groff knew about the possible problem, he noted Cochise County was handling the situation.

The county was unable to comment Thursday on the extent of the problem as staff was onsite surveying the road.

The fissures in the same location were reported in a story by the Herald/Review in October 2020. The rangeland adjacent to Cochise Stronghold Road had a three-quarter-mile-long scar, visible from satellite, and a second, smaller fissure opening just a few feet east of it. The fissures run north to south across the rangeland and the largest is anywhere from 2 feet to 9 feet deep and 3 to 5 feet across. All the land to the east of the fissure has dropped about 2 to 4 feet. Small sinkholes had popped up parallel to the fissures.

A 40-foot section of road was replaced with a 12-inch-thick layer of concrete, like a bridge over the fissure which, unfortunately, appears to be still growing.

Jackie Watkins, director of the Engineering and Resources Department, said at the time, “The only thing we can do is fill them in, compact the dirt and pave over them. We have no way to prevent them.”

According to a 2015 study, the Arizona Department of Water Resources noted steep groundwater declines in the Willcox Basin and identified areas of severe land subsidence with “some of the highest concentrations of mapped earth fissuring in the state,” which indicates groundwater overdraft.

ADWR hydrologists and geologists have been tracking the decline of water in the aquifer over the past several years due to extensive agricultural irrigation pumping, which has left many historic homesteads with dry wells. Those whose wells have gone dry and cannot afford to drill deeper into the aquifer to find water are left hauling water or selling out.

In Sunsites, modeling shows the aquifer will continue to decline at a rate of around 3 to 5 feet a year, Nelson said. He relied on years of monitoring the wells of property owners who volunteered them as data collection sites within the 1,911-square-mile Willcox Basin.

With the increase in water use for agriculture, which often utilizes wells drilled to 1,000 feet or more, cones of depression have formed in three areas, stated Keith Nelson, senior research hydrologist with ADWR in a Willcox Water Project workshop.

The biggest drawdown, and largest cone of depression, is in the Kansas Settlement area and appears to be propagating out to Sunizona. There it will continue to cause problems as the water level declines further.

“You have this natural recharge in the peripheral Sky Islands around the basin, but the overdraft is significant,” Nelson said. “The pumping is so extreme, it exceeds all recharge.”

According to Nelson, groundwater withdrawals decreased markedly after the early 1980s, remaining relatively stable at about 110,000-acre feet per year through the 1990s. In 2000, withdrawals gradually began increasing again and were estimated at an average of about 172,000 acre feet per year from 2000 to 2014. Between 1940 and 2015, the cumulative volume of water lost from storage ranged from 4.9 million to 6.2 million acre feet.

When that much water is taken out of the ground, the land above it cannot sustain the weight and it begins to subside, Nelson said. The land subsidence in the area around Dragoon is nearly 3 inches a year with Kansas Settlement sinking an average of 2 inches a year.

A basin well sweep was completed by ADWR in January of the Willcox Basin. The depth to groundwater of wells volunteered for study are measured annually for some, periodically for others. The study is due to be published later this year.