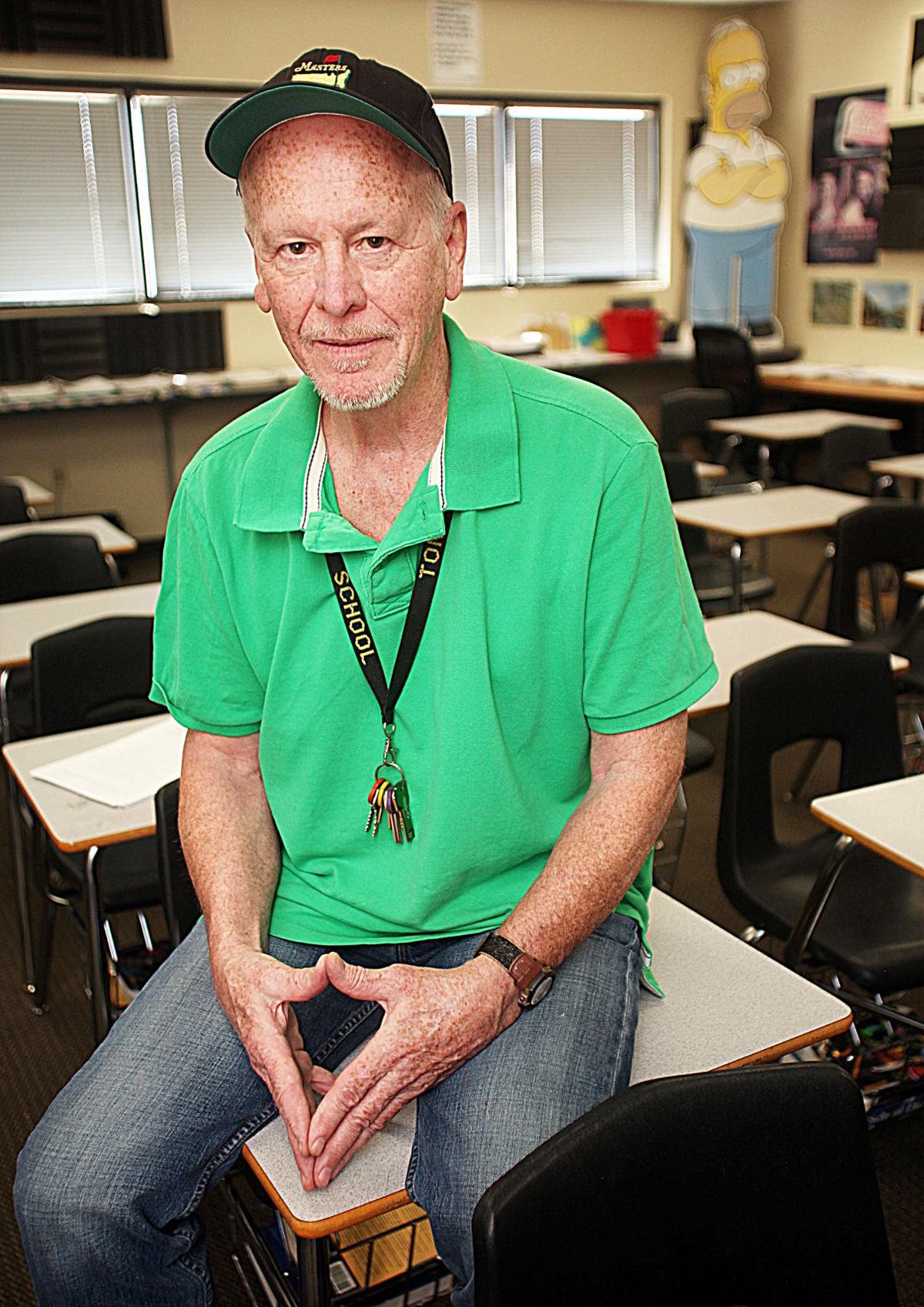 Tombstone High School teacher Tom Buchan does not agree with the RedForEd movement because teachers signed a contract with their district and knew what they were getting into. 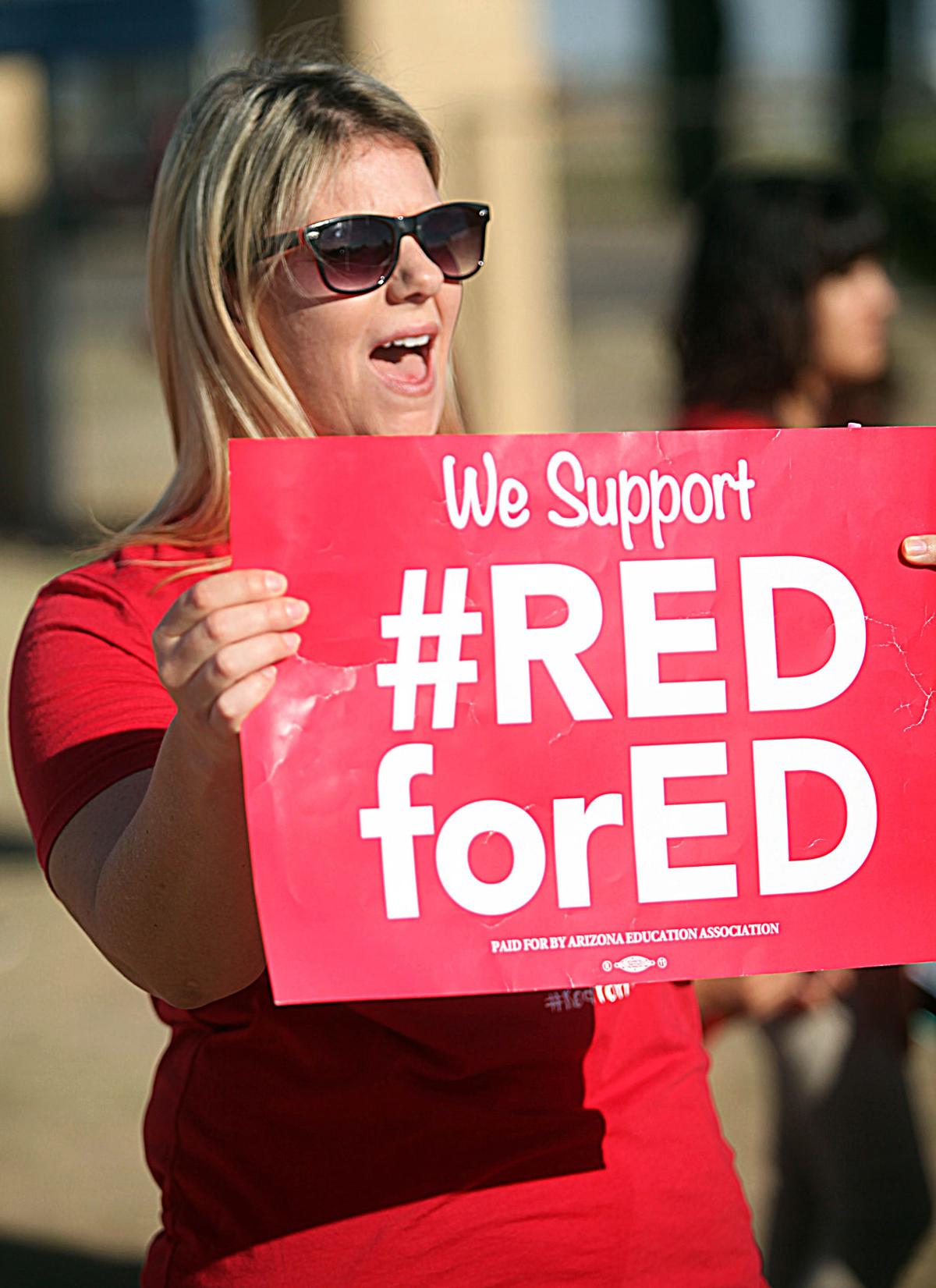 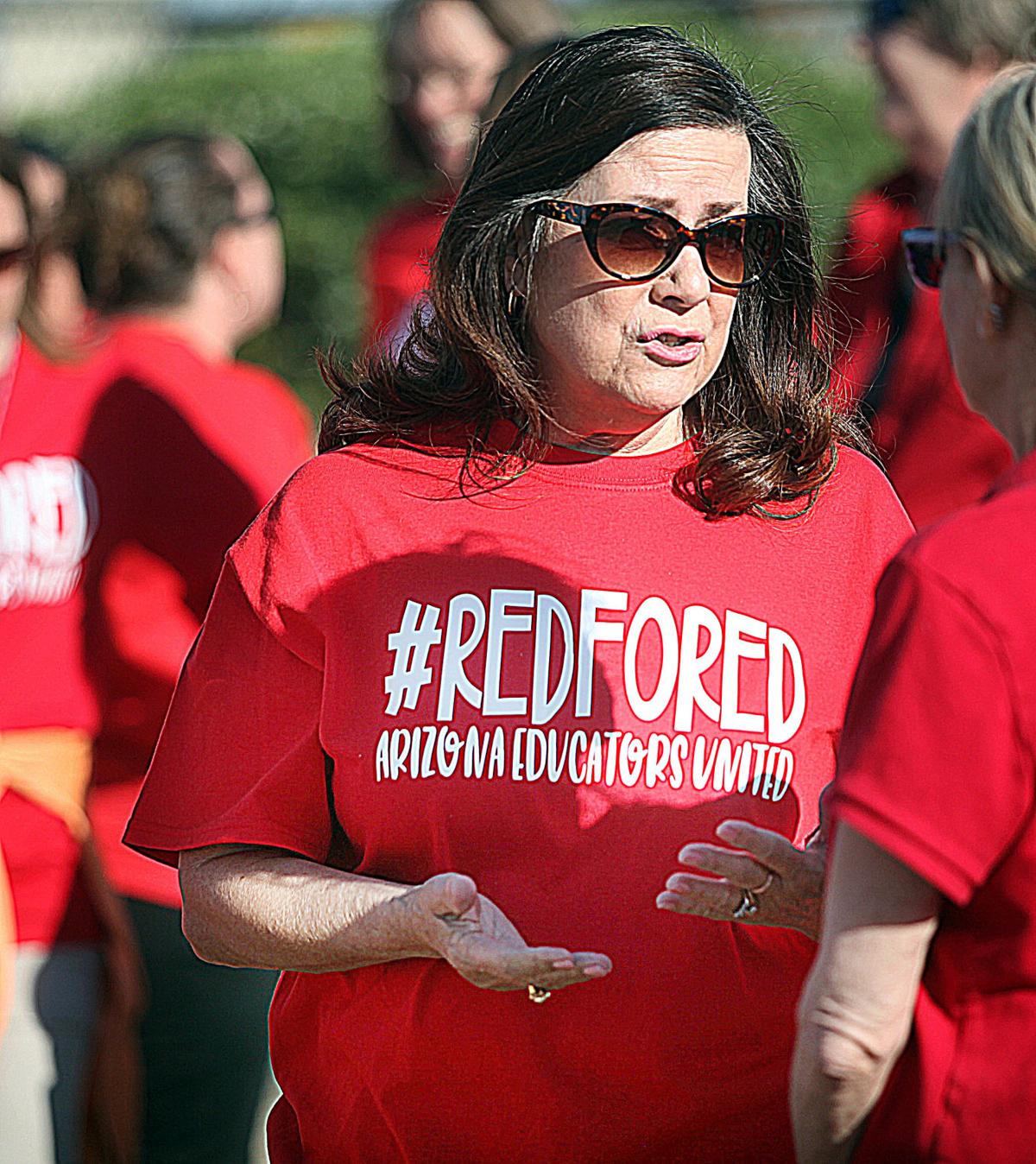 Retired teacher Deni Austin is on hand to participate in yesterday’s walk-in in Palominas. 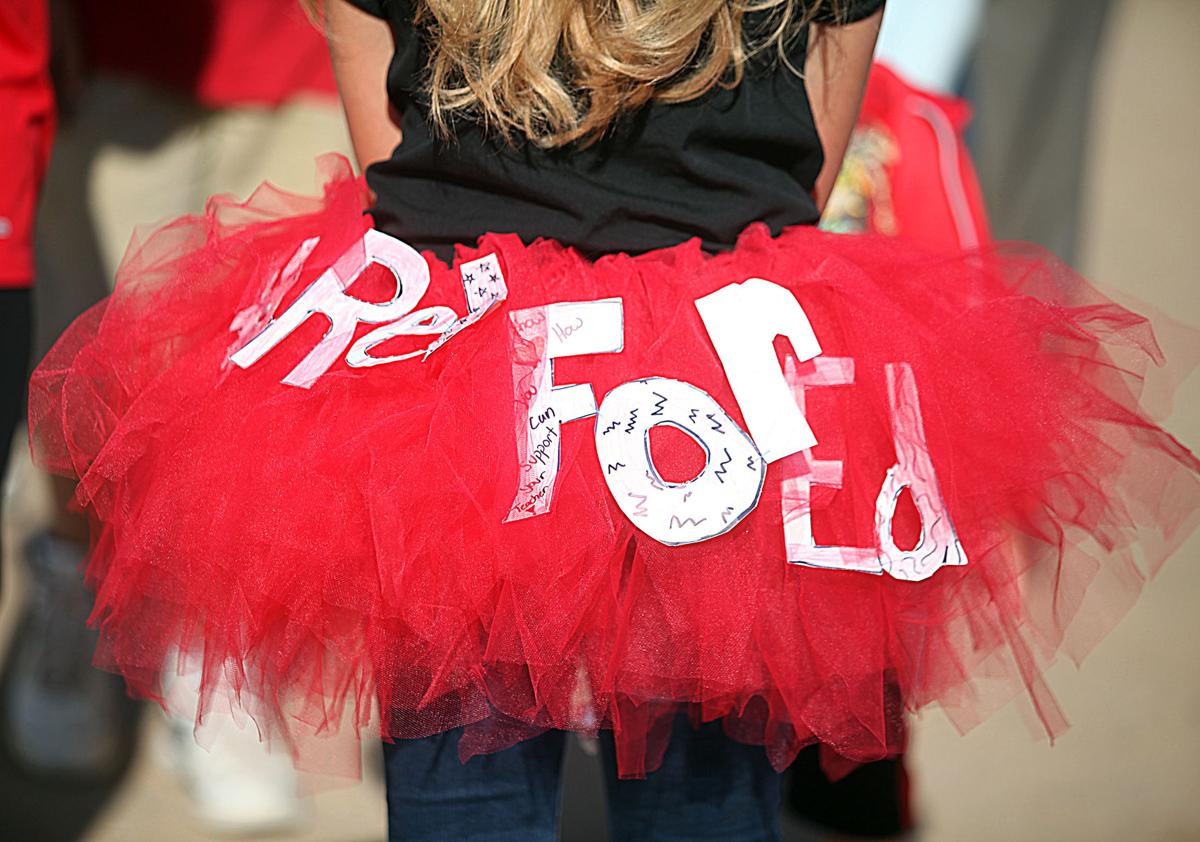 Tombstone High School teacher Tom Buchan does not agree with the RedForEd movement because teachers signed a contract with their district and knew what they were getting into.

Retired teacher Deni Austin is on hand to participate in yesterday’s walk-in in Palominas.

SIERRA VISTA — A statewide teacher walkout shut down more than 1,000 Arizona schools Thursday and Friday, and there are no definite timelines as to when many of them will be reopening.

According to local educators who participated in a rally at the state Capitol on Thursday and Friday, approximately 75,000 red-clad supporters with signs braved hot Phoenix temperatures to demand that state officials fully fund public education.

Rallies in other parts of the state were held, as well. Locally, Red for Ed supporters were at Veterans Memorial Park in Sierra Vista on Thursday and Friday. Douglas School District educators and supporters also organized a rally Friday evening, which was attended by Cochise County Superintendent of Schools Jacqui Clay.

While Sierra Vista Unified School District schools are closed, teachers and support staff have been meeting in the Mall at Sierra Vista food court to grade papers and provide tutoring for students.

Yolanda Everett, a Village Meadows fourth-grade teacher, was one of several at the mall on Friday.

“I’ve been with the Sierra Vista district for 12 years, and am being paid on a fourth-year pay scale because of funding cuts,” she said. “Every year our classes get bigger, while our funding gets smaller. I’ve reached out to our legislators, but no one at the legislative level is listening to us. I support this walkout because it’s important that educators make a united statement.

“We’ve waited too many years for change to come, while our funding concerns fall on deaf ears.”

Message from a state senator

However, Senator Gail Griffin of Legislative District 14 refutes the “legislators are not listening” claims.

“We support our teachers, and for years we have wanted more monies for our students and teachers. We do have a plan for a 20 percent increase for teachers’ salaries,” she said.

Griffin said Senate members and staff have been working 14-hour days putting language together for all the budget bills. The education bill is one of nine, she said. With more than 400 different line items to consider, Griffin said the Senate hopes to have a budget ready by sometime Monday.

She also said she is fielding a number of calls from her constituents, both for and against the strike.

“I want to thank the teachers that are staying in their classrooms. The hardships the walkout is creating on parents and students have become a really big issue, and I’m hearing from those affected,” she said.

Unhappy parents are talking about home-schooling their children, while others are looking into charter or private school options, Griffin said.

Funding in Arizona is complicated because of the state’s particular revenue situation, Griffin said.

Locally, SVUSD will be closed Monday as teachers and support staff join in the statewide movement for more education funding.

“School will reopen when administration can verify we have sufficient supervision in our schools for safe operations, or when the state walkout has concluded,” parents were advised through an emailed notification on Friday, signed by SVUSD Superintendent Kriss Hagerl. “Based on our current information, SVUSD will cancel all remaining early release Thursday schedules, making those days regular school days.”

The district will announce schedule changes and reopening dates when those times are made available. Meanwhile, those wanting information are advised to go to svusd68.org for updates.

“We are grateful for the support of the community during this time,” Hagerl said through an emailed statement. “It has been wonderful seeing so many of our parents and community members reaching out to help our students and staff. All of our elementary school cafeterias have seen a number of children take advantage of breakfast and lunch programs.”

Hagerl said she believes the teachers, parents and community members who have walked at the Capitol, written letters and held rallies have been “very effective in getting their voices heard” throughout Arizona and the nation.

“I hope our legislators understand and act on the need for permanent, sustained increased funding for public schools. I am proud of the professional manner in which our teachers and staff have conducted themselves during this time, supporting our children and each other to the best of their ability.”

On Monday, Hagerl said she hopes to have a better idea of the earliest possible date for opening the district’s schools, promising to keep parents, staff and the community informed of any changes.

Benson schools were among the districts that closed Thursday and Friday for the walkout. While Superintendent Micah Mortensen said he plans to reopen the schools on Monday, he noted the decision hinges on adequate staffing.

When asked if he supports the walkout, Mortensen replied with the following comment.

“While I agree public education in Arizona is woefully underfunded, I believe the clearest path for resolving this problem is to elect legislators that are public-school friendly. Many of our current legislators do not support public schools. Parents should call their legislators and ask them where they stand on vouchers and private schools. If they support vouchers for private schools, then they do not support public education. If you know this, then you need to vote accordingly when you go to the polls in November.”

Echoing some of Mortensen’s comments, Saint David School District Superintendent Mark Goodman, whose district is remaining open through the strike, also feels the best solution is to be heard by legislators.

“I try to reach out to state legislators and communicate my concerns to them,” he said. “I make every effort to stay on top of state funding issues and try to communicate teachers’ salaries and education budgeting to the community so everyone understands the issues. School funding is a complex process at all levels, and attempting to resolve something this complicated is no easy task,” he said. “I certainly understand the frustrations that our legislators have when it comes to the budget, and I understand the frustrations our teachers have when it comes to adequately funding education. The staff at Saint David School District did not participate in the walkout because we felt it was not in our community’s and students’ best interest to do so. However, we support the message the participants are sending to our legislators.”

While some Tombstone Unified School District teachers support the reasons for the walkout, teachers in the school district are not participating.

Two of the district’s high school teachers — Tom Buchan and Robin Sexton — spoke out against the strike.

“I fully sympathize with the fact that Arizona teachers are underpaid, class sizes are becoming ridiculous, and funding should be restored to 2008 levels,” Buchan said. “However I completely disagree with the #RedForEd movement when it comes to walkouts and strikes. All teachers signed contracts agreeing to work for a specific amount of money, and those contracts must be honored.”

He went on to say contracts must be honored, and no one has the right to walk out on a contract without serious repercussions.

“Do your demonstrating and protesting on your own time, not on school time and most importantly, not on the student’s time.”

Buchan, who has been with THS for 12 years, teaches economics, Arizona and U.S. Constitution, American and world history, and English.

“I think this strike is going to come back and haunt everyone. This mentality of ‘strike first and deal with the consequences later’ is not the way to negotiate.”

Calling the movement politically motivated, Buchan said he questions the motives of two high-profile Red for Ed activists, Noah Karvelis and Derek Harris, who he says claim to be bipartisan but are far from that.

“Karvelis worked for Bernie Sanders and both endorsed Democrat David Garcia for governor at the time they started an organization called Arizona Teachers United. This is the organization that endorsed the Red for Ed movement,” he said. “There is nothing bipartisan about these two. Bernie Sanders is a self-admitted socialist, so one would have to take a hard look at his supporters and any bipartisan claims.

“Both Karvelis and Harris are about as ultraleft as you get.”

Sexton said he supports the cause behind the Red for Ed movement, but believes the method is wrong.

“I’m proud to be working with a group of people that are willing to stand by what they believe without walking out and impacting the students,” he said. “Given the current teacher shortage in Arizona because of this funding crisis, I think it would have been far more impactful if teachers had just refused to sign their contracts.”

Researching legislators to determine which ones do not support education and then voting them out of office is another angle Sexton advocates.

“I think a lot of time, effort and money could have been used more productively without impacting the students,” he said. “As an Arizona teacher, I’ve had to work second and third jobs to make ends meet. But I knew what I was getting into at the time I signed my contract.

“I feel it’s ethically wrong not to fill a contract, which is why I oppose the walkout.”

On Monday, Tombstone High School teachers and staff will wearing red for a walk-in prior to the start of school in a show of support for the message behind the Red for Ed movement.

The following information — provided by concerned parents and local Red for Ed supporters — broadly outlines issues that started the #RedForEd movement and what educators hope to accomplish through the statewide walkout.

Permanent certified salary structure, to include annual raises for all staff.

Classrooms go without updated textbooks, basic supplies and technology. Teachers often purchase basic supplies out of pocket. In addition, Arizona has one of the highest class sizes and school counselor loads in the nation.