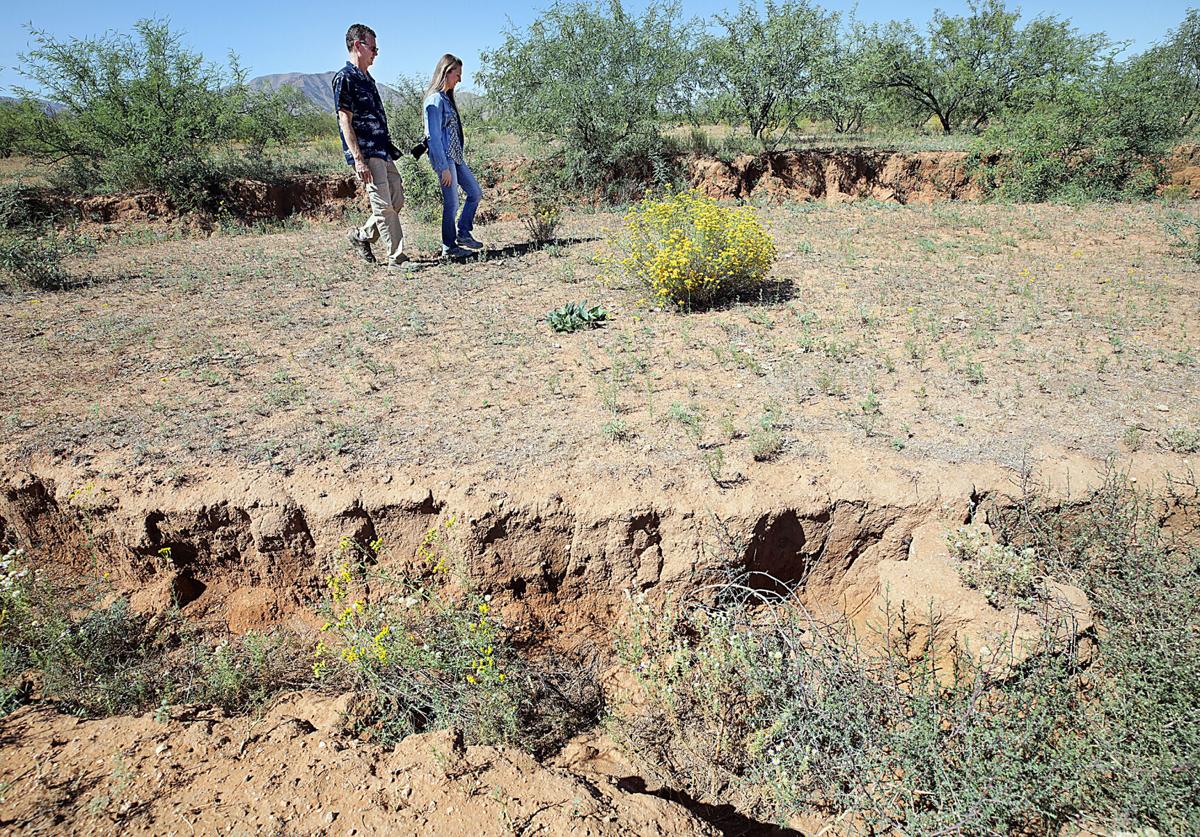 Mark and Stefanie Spencer walk between two fissures in the desert in Cochise. 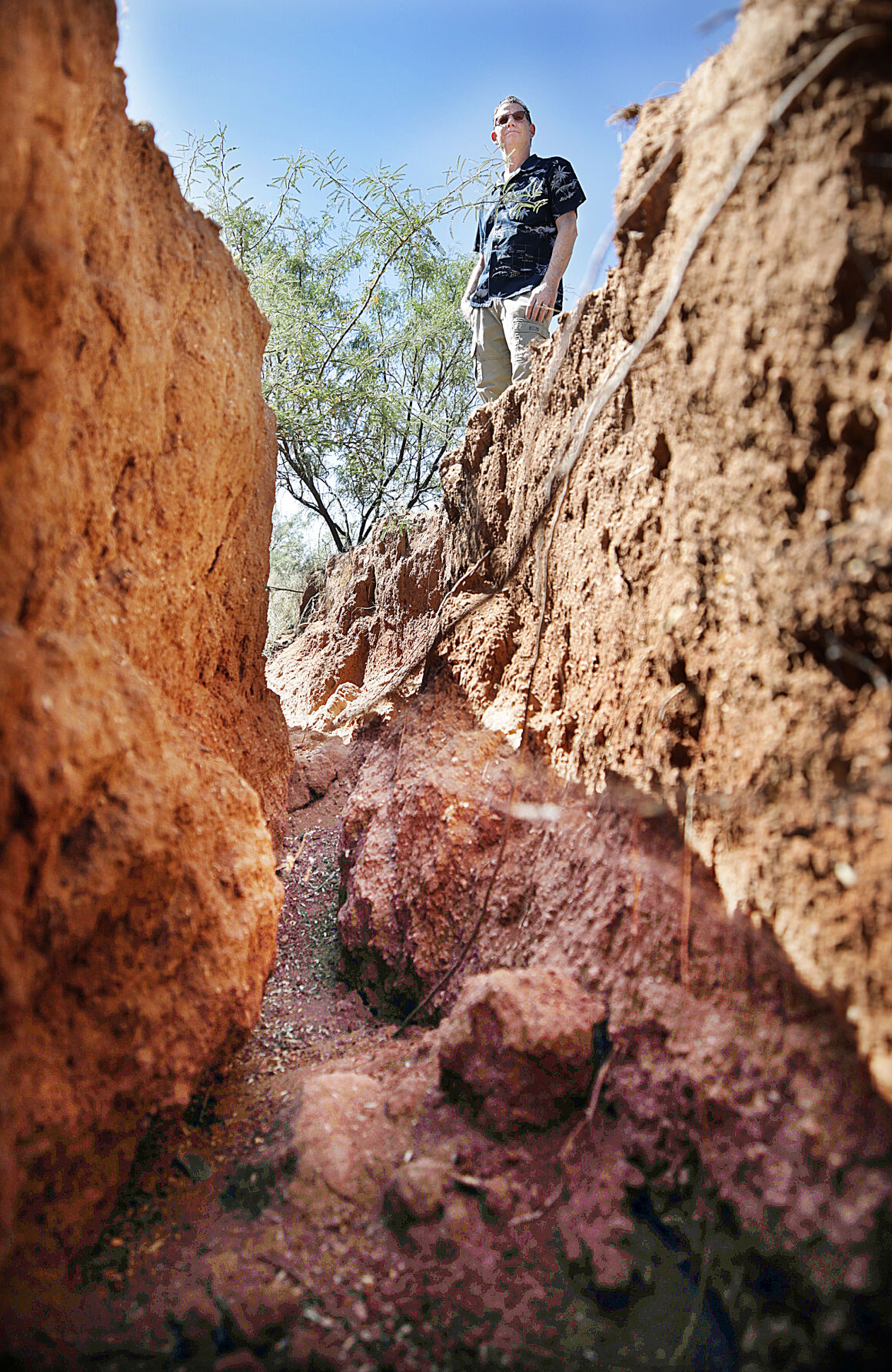 Cochise area resident Mark Spencer stands next to a fissure last week. The Willcox water basin is being depleted, which leads to ground subsidence. 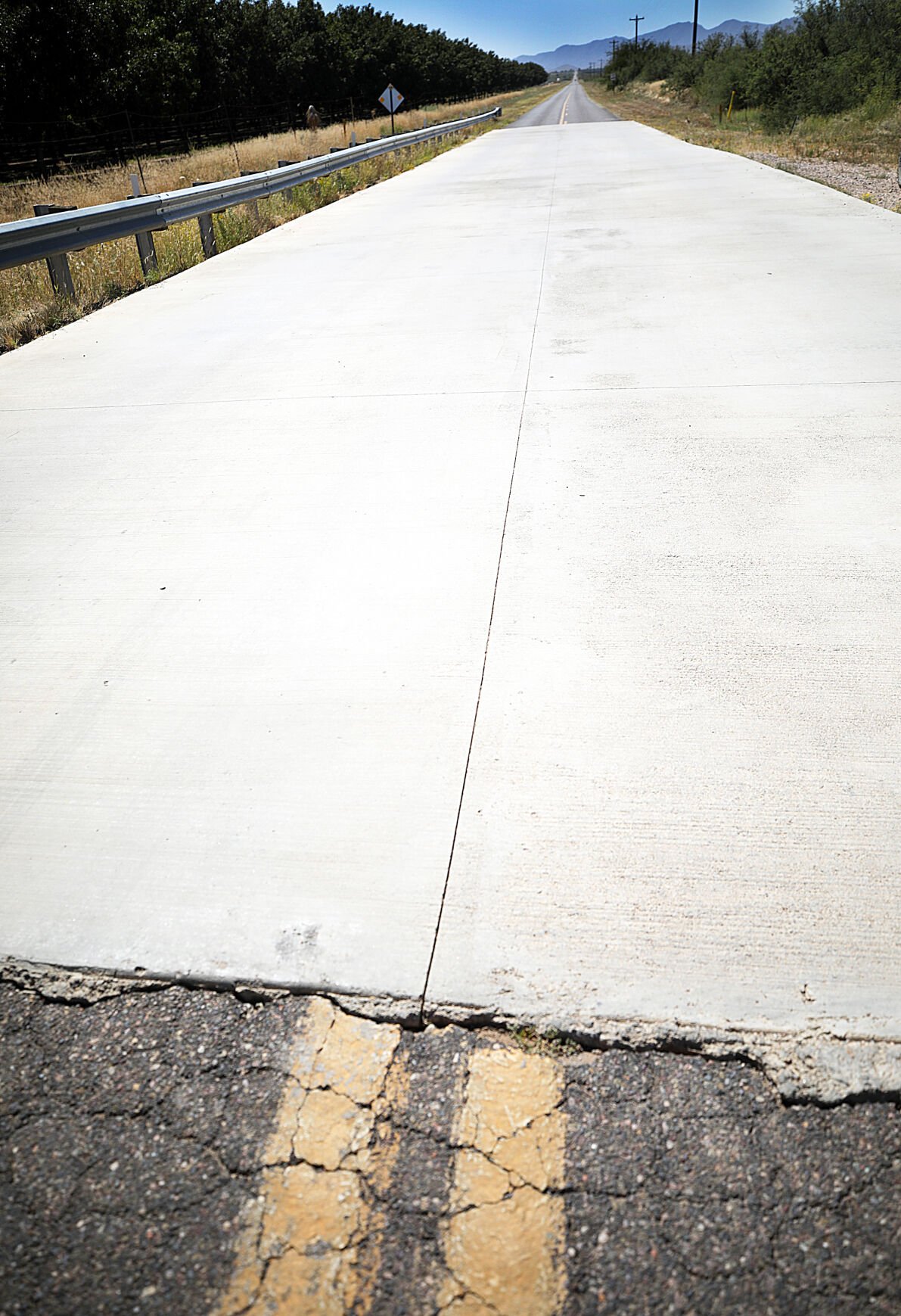 Due to ground subsistence, Dragoon Road was stricken with fissures and needed to be repaired.

With ground subsistence and ensuing fissures occurring around the Cochise area, a warning sign can be seen at the intersection of Cochise Stronghold and Dragoon Roads. 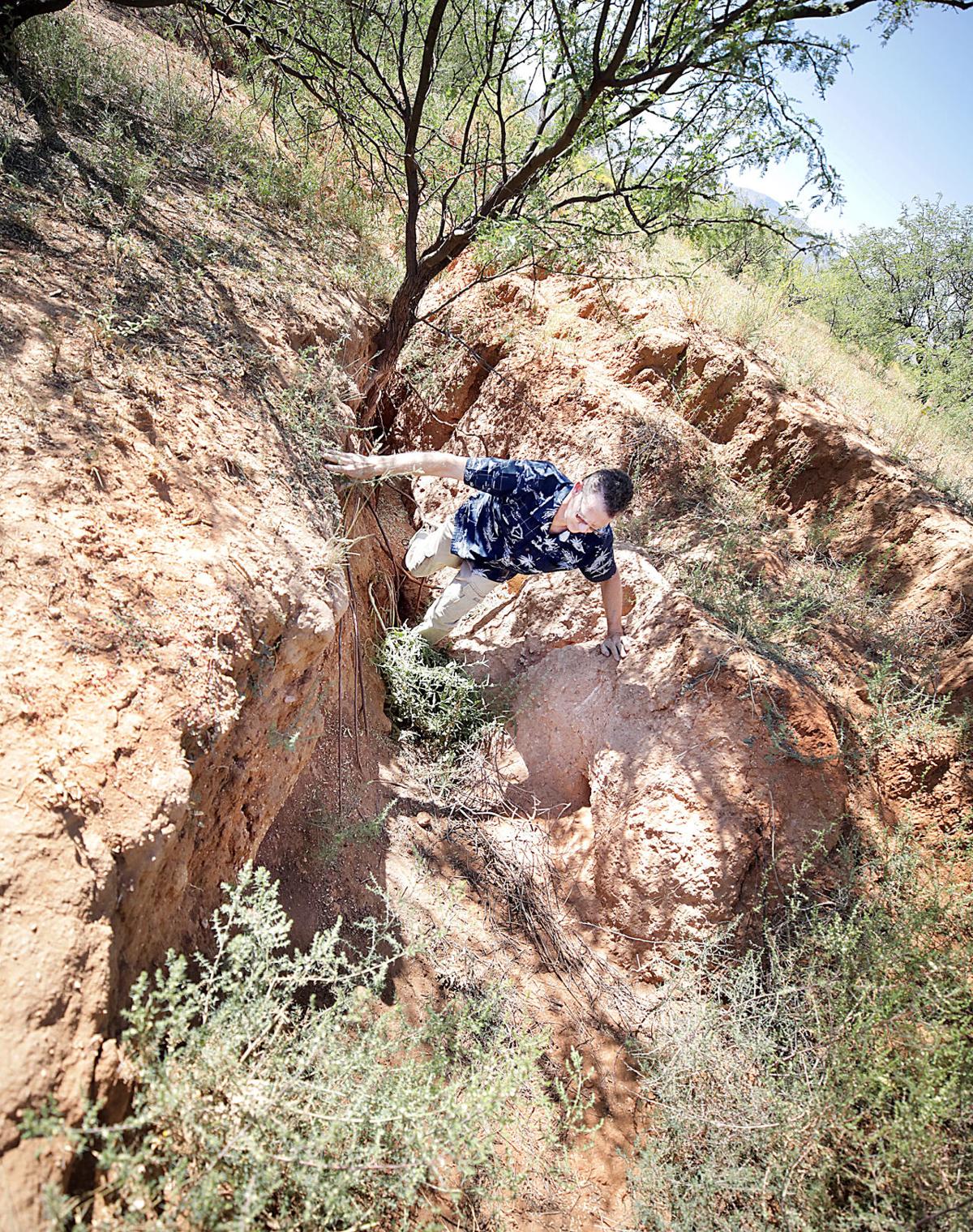 Mark Spencer is practically engulfed while hiking inside of a fissure. 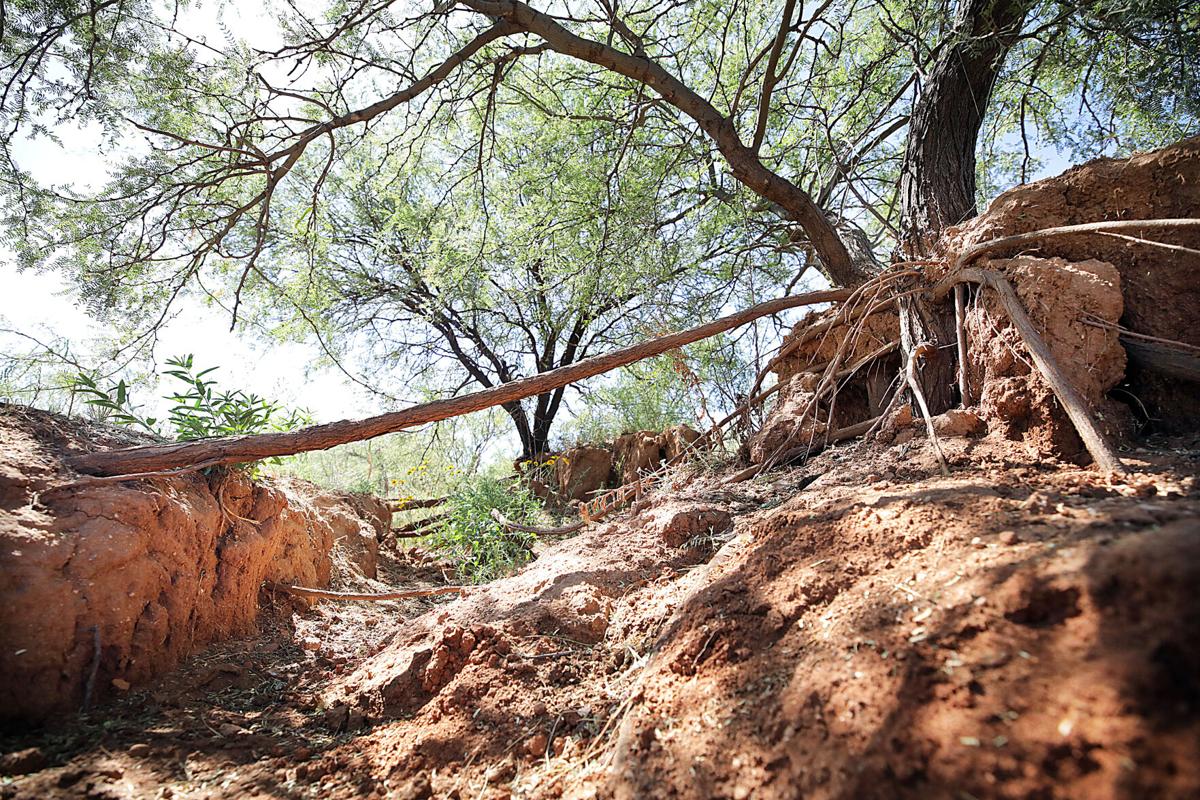 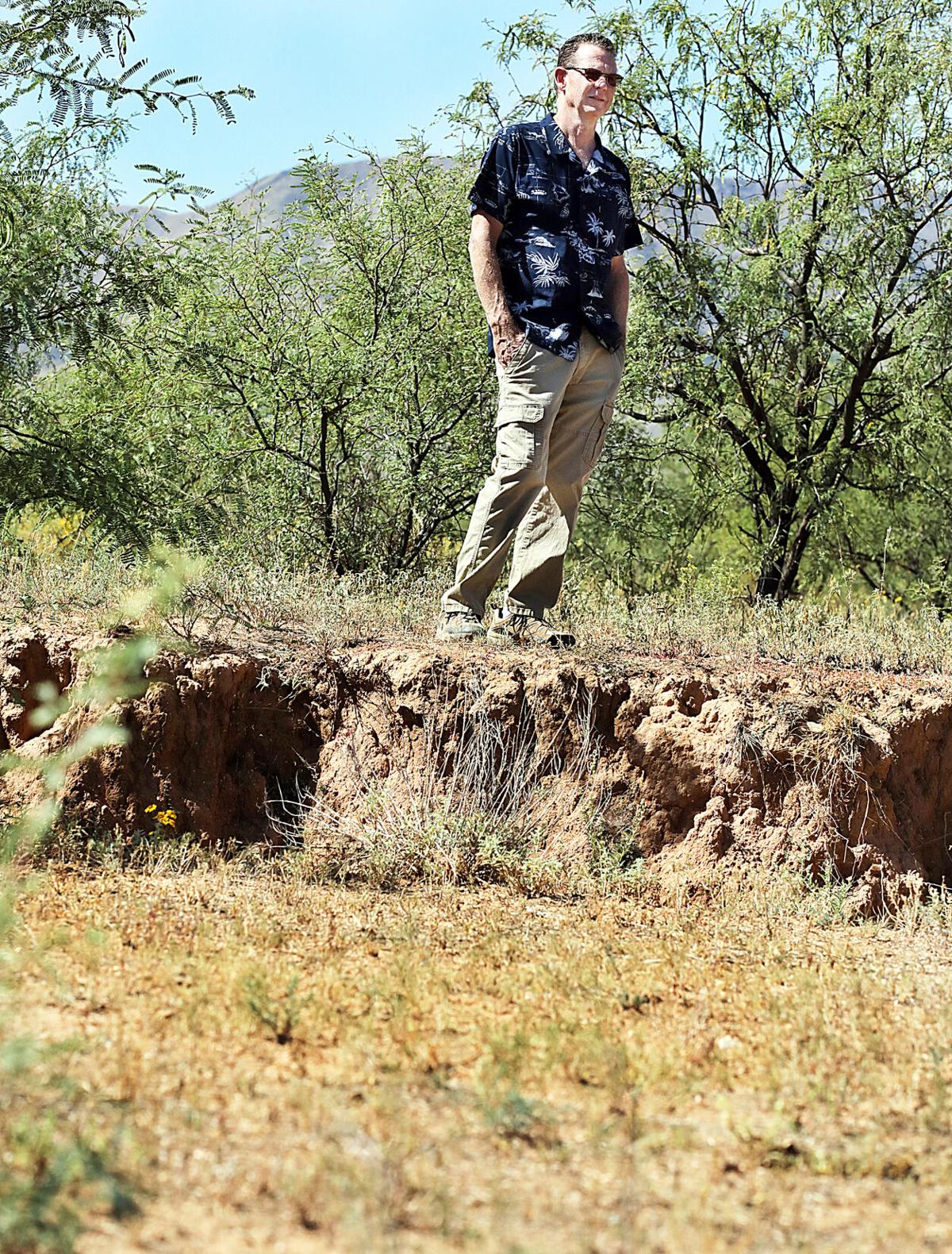 The ground has dropped at least three feet in this desert area in Cochise.

Mark and Stefanie Spencer walk between two fissures in the desert in Cochise.

Cochise area resident Mark Spencer stands next to a fissure last week. The Willcox water basin is being depleted, which leads to ground subsidence.

Due to ground subsistence, Dragoon Road was stricken with fissures and needed to be repaired.

With ground subsistence and ensuing fissures occurring around the Cochise area, a warning sign can be seen at the intersection of Cochise Stronghold and Dragoon Roads.

Mark Spencer is practically engulfed while hiking inside of a fissure.

The ground has dropped at least three feet in this desert area in Cochise.

COCHISE — Dry wells, land subsidence and fissures are all connected and adding to the dismay of many people living in the northeastern corner of Cochise County.

Land subsidence and fissures are hallmark indicators of loss of groundwater in an aquifer.

As water is pumped out, the land collapses, explained Joe Cook, with the Arizona Geological Survey in a Zoom presentation Oct. 6 hosted by the Sierra Club’s Arizona Water Sentinels. Over 35 people joined the meeting.

Cook knows every one of the 176 miles of fissures in the state and is very familiar with the land subsidence and fissure problems in northeastern Cochise County.

“Agriculture exploded there over the past few decades,” he said. “And, with no limit on pumping water, Cochise County will continue to have the most dramatic land subsidence in the state.”

Though property owners tried to reach an agreement on water use in 2015, “Many of them did not want to be told what they could and couldn’t do. Now, it’s almost too late. There are too many deep wells. The future looks kind of bleak. Wells are going dry. The water use is not sustainable.”

Danger of fissuresCook pointed out the danger of fissures which often can be filled with sediment and appear to have a bottom which can be deceiving. The fissure may look just a few feet deep, but actuallly are 15 feet or more. Stock can get stuck in them and die as they seek water or shade of vegetation that can collect on sediment shelves.

Sinkholes may be in close proximity of fissures which can also be hazardous.

Still, it is people who create the most danger when they dump trash, chemicals and garbage that may cause irreparable damage to water quality of the aquifers below.

Residential and business developments can also be built over pre–existing fissures which were filled in at great expense, well out of the range of what a normal homeowner could afford, though Arizona has a law on the books requiring notification of their existence, he continued. Even so, a development in the Luke area has 1,200 homes next to a fissure.

“And they covered the fissure up and built a shopping mall over it,” he noted.

Filling in fissures can also be dangerous as the depth of it can be deceiving, Cook said. There can be a huge, gapping cavern below what looks like the bottom of a fissure. On one of his trips in 1997, a fissure was so deep and wide owls flew out of it. In a wider fissure, a colleague was able to fly a drone in it.

As far as he knows, no people have died in a fissure or gotten trapped.

“And, fissures can form from nothing,” he continued. “It seems fine one day and you go back the next and find a crack half a mile long. New fissures can abruptly open, sometimes well over half a mile at once. They can devalue property and disrupt access.”

Firsthand lookMark Spencer and his wife Stefanie decided to make their home here in Cochise County 20 years ago and bought a slice of land near Cochise, the small unincorporated community south of Willcox. They built their home and drilled their well and expected to live out their retirement years comfortably. They made the permanent move in 2002.

Mark Spencer said, “We noticed that our water began to have a lot of sediment in it about five years ago, but only during irrigation periods of the 320 acres next to us. After a couple years of this, our pump motor burned up, and the serviceman came to replace it and showed us that our well had dropped 70 feet in the 15 years that we had lived here, or about five feet per year.”

“We had to deepen our well from 400 feet to 600 feet at a cost of about $12,000,” he added. “Multiple people within about a 10-mile circle of our home have experienced the same, some not having the finances to deepen now are hauling water.”

He also noticed fissures while flying in regular low flights across the valley and became “alarmed” at the number and length of them.

A tour of rangeland adjacent to Cochise Stronghold Road with the Spencers showed a three quarter–mile long scar, visible from satellite, and a second, smaller fissure opening just a few feet east of it. The fissures run north to south across the rangeland and the largest is anywhere from two feet to nine feet deep and three to five feet across. All the land to the east of the fissure has dropped about two to four feet. Small sinkholes are also popping up along the fissures.

On the ground above the fissures were six dead, decaying cows. Mark Spencer said the well providing water to the cattle was no longer producing.

ADWR addresses problemMore and more pecan orchards and fields of grain for dairy cows are taking root in the northeastern part of Cochise County on what was once rangeland and old farmlands creating areas of land subsidence and fissures in Cochise, Dragoon and the Sunsites areas that range from inches to a few feet.

With the increase in water use for agriculture, which often drill deep wells to 1,000 feet or more, cones of depression have formed in three areas, stated Keith Nelson, senior research hydrologist with the Arizona Department of Water Resources (ADWR) in a Willcox Water Project workshop. One is in the north which could impact Aravaipa Creek in the near future and two are in the south which continue to grow.

The biggest drawdown, and largest cone of depression, is in the Kansas Settlement area and appears to be propagating out to Sunizona. There it is causing and will continue to cause problems as the water level declines further.

In Sunsites, ADWR modeling shows the aquifer will continue to decline at a rate of around three to five feet a year, Nelson said. He relied on years of monitoring the wells of property owners who volunteered them as data collection sites within the 1,911-square mile Willcox Basin.

According to a 2015 study, ADWR noted steep groundwater declines in the Willcox Basin and identified areas of severe land subsidence with “some of the highest concentrations of mapped earth fissuring in the state.” All of which indicates groundwater overdraft. “This subsidence is generally not recoverable. If this subsidence occurs over areas of bedrock, differential subsidence can occur.”

Nelson said, “You have this natural recharge in the peripheral Sky Islands around the basin, but the overdraft is significant. The pumping is so extreme, it exceeds all recharge.”

According to Nelson, groundwater withdrawals decreased markedly after the early 1980s, remaining relatively stable at about 110,000 acre–feet per year through the 1990s. But, in 2000, withdrawals gradually began increasing again and were estimated at an average of about 172,000 acre–feet per year from 2000 to 2014. Between 1940 and 2015, the cumulative volume of water lost from storage ranged from 4.9 million to 6.2 million acre–feet.

When that much water is taken out of the ground, the land above it cannot sustain the weight and it begins to subside, he added. The land subsidence in area around Dragoon is nearly three inches a year with Kansas Settlement sinking an average of two inches a year.

County roads impactedJackie Watkins, director of Engineering and Resources Department, said fissures across the northeastern portion of the county are of concern to her. One of the largest fissures to form occurred around 2005 on Kansas Settlement Rd. It was 1,000 feet long, eight feet wide and 15 feet deep.

“That one was amazing,” she said.

On Cochise Stronghold Road, a 40-foot section of road was replaced with a 12-inch thick layer of concrete which acts like a bridge over a fissure which is still growing.

“The only thing we can do is fill them in, compact the dirt and pave over them,” she said. “And we have no way to prevent them.”

Protecting rural aquifersJocelyn Gibbon, Freshwater policy Consulting, said at a recent Arizona Audubon presentation on groundwater problems, “Local authorities have no jurisdiction over water resources until the state legislators give the authority to them.”

To that end, environmental and civic groups have been working with some in the state legislature, but they have been unable to move forward. She hopes the coming legislative session will be more productive on water issues in the rural areas.

Former Gov. Bruce Babbitt regretted not including rural communities and groundwater use when the state formed Active Management Areas and Irrigation Non-Expansion Areas in 1981 which were intended to “aggressively manage the state’s finite groundwater resources to support the growing economy.” Five AMAs were formed in Prescott, Phoenix, Pinal, Tucson and Santa Cruz counties and are subject to regulation consistent with the goals to meet safe yield defined as no more groundwater be withdrawn than what is replaced annually.

“Our legislators must wake up to this issue,” said Mark Spencer. “The longer we wait, the more devastating the consequences, and draconian measures necessary to arrest the damage taking place.”

“Agriculture exploded there over the past few decades. And, with no limit on pumping water, Cochise County will continue to have the most dramatic land subsidence in the state.”

More about fissures and earth subsidence

To see fissures arounbd the state, visit the website: https://azgs.arizona.edu/center-natural-hazards/earth-fissures-ground-subsidence