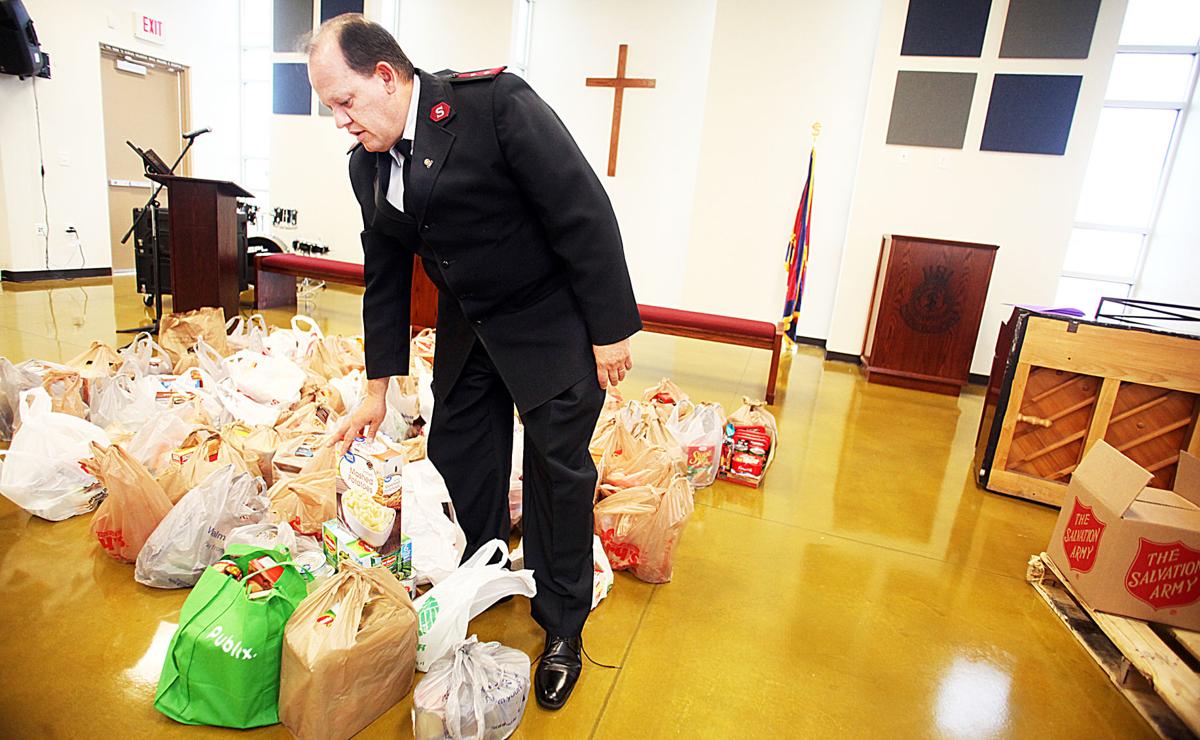 Salvation Army Capt. Carlos Souza checks on items in the chapel, which is being used to house food donations and boxes to be given out for the Thanksgiving holiday. 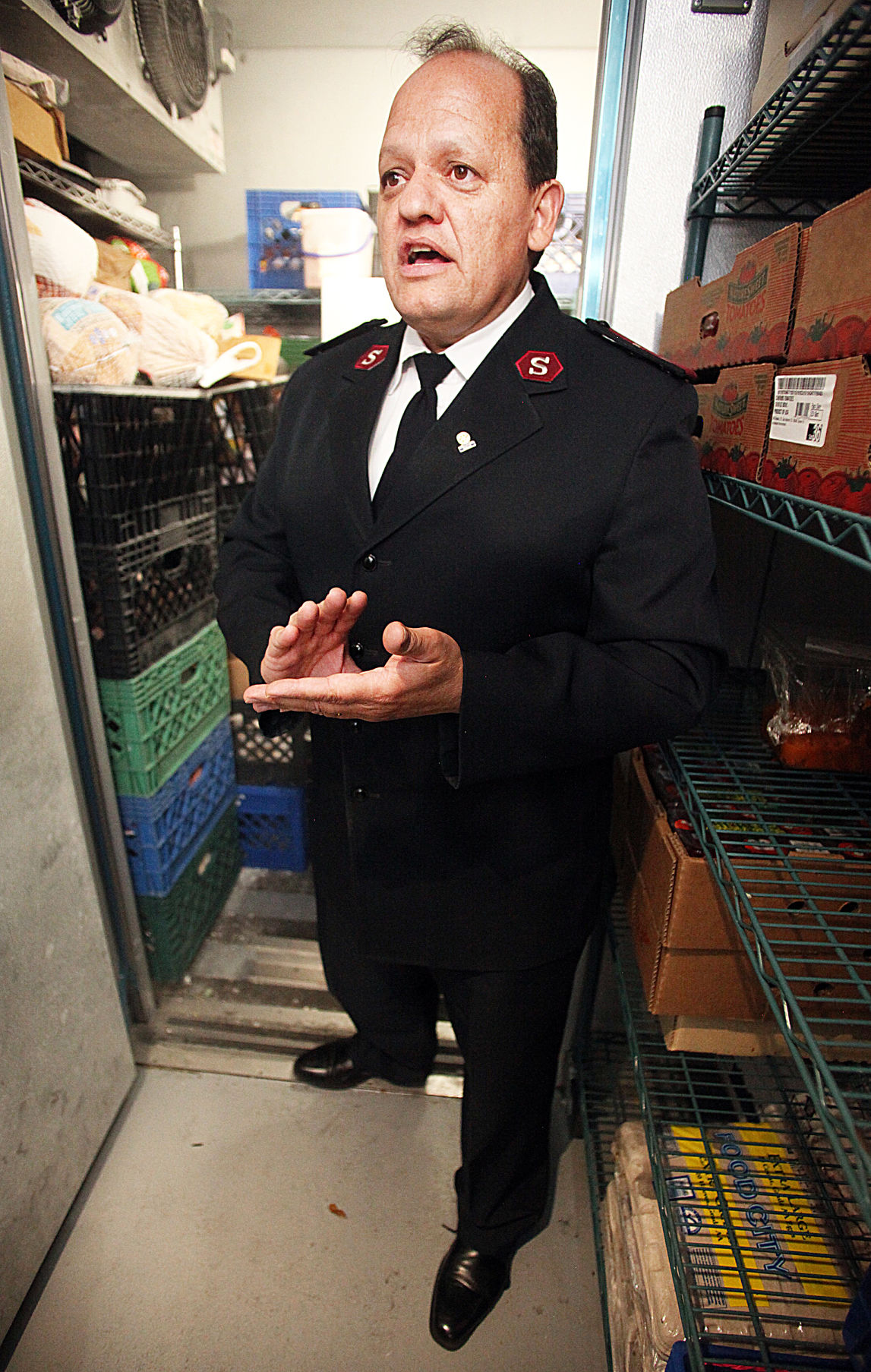 Salvation Army Capt. Carlos Souza stands in the facility’s freezer area Wednesday while he explains the need for frozen turkeys for the upcoming Thanksgiving holiday. Souza estimates the Sierra Vista Salvation Army could use about 500 turkeys.

Salvation Army Capt. Carlos Souza checks on items in the chapel, which is being used to house food donations and boxes to be given out for the Thanksgiving holiday.

Salvation Army Capt. Carlos Souza stands in the facility’s freezer area Wednesday while he explains the need for frozen turkeys for the upcoming Thanksgiving holiday. Souza estimates the Sierra Vista Salvation Army could use about 500 turkeys.

SIERRA VISTA — Local food banks have the same goal of lending a hand to those in need this Thanksgiving, but they need some help from the community to meet the rising demand this year.

“All our requests come through the schools,” she said. “We don’t know who the families are.”

Requests came from the Palominas, Sierra Vista and Tombstone school districts. Pacheco is opening the doors to the pantry on Thursday morning for turkey donations. She said based of their social media post they have generated a lot of interest in donating. Peach’s Pantry, located on the east side of the Rothery Center, will be open from 8 to 10 a.m. Thursday morning for turkey collection.

Part of the increase Peach’s Pantry has seen in their numbers is because St. Vincent de Paul Our Lady of the Mountains, out of Hereford, decided they would not do their Thanksgiving boxes, so Pacheco agreed to serve the area.

She and her volunteers will distribute the boxes to the schools on Tuesday. The local Elks Club wrote a grant to get the “fixins” for the boxes and are packing the boxes with items like stuffing and vegetables to go with the turkeys. Pacheco also received help from local restaurants to store the turkeys, since she doesn’t have freezers at the pantry.

Pacheco said any extra turkeys she receives she will give to another organization to help them with their distribution.

“We all have the same mission, so we can get everyone fed,” she said.

Most of the turkeys the Salvation Army have been given will go to Cochise College as the culinary program is preparing the Thanksgiving meal, which Souza said he expects to feed 600 people. Of those 600 people, just over 200 will be delivered to people who are unable to leave their homes to eat at the Salvation Army.

The reason for needing 600 more turkeys is because that’s how many boxes and turkeys Souza anticipates he will be giving away on Saturday. To help fill the boxes, he requested a shipment of food be brought from Tucson, which was granted.

“We’ve been providing about 1000 food boxes a month and we believe 700 of them couldn’t afford turkeys,” Souza said. “So we decided to go big with faith and help the community and the needy.”

“We couldn’t do it without the support of this great community.”

Last year the Salvation Army gave out over 300 turkeys and boxes, but because of the need in the community and aggressiveness of getting the word out, the number has more than doubled.

Turkeys can be dropped off at the Salvation Army Thursday and Friday. Souza said to receive a box community members have to stop by the center to fill out an application. They can do so for the next two days.

Cash and checks can also be dropped off so the organization can purchase turkeys.

Ann Lund, a volunteer, said they need about 100 more turkeys to fill the demand they have. Donations can be made at the food bank, the St. Vincent de Paul thrift store and St. Andrews Church.

Part of the reason they are distributing more is because they are working with Safeway to give the grocery store’s boxes to couples and single families. Lund said in previous years, the food back wouldn’t serve single people or families of two.

St. Vincent de Paul will distribute their boxes on Tuesday from 8 to noon.