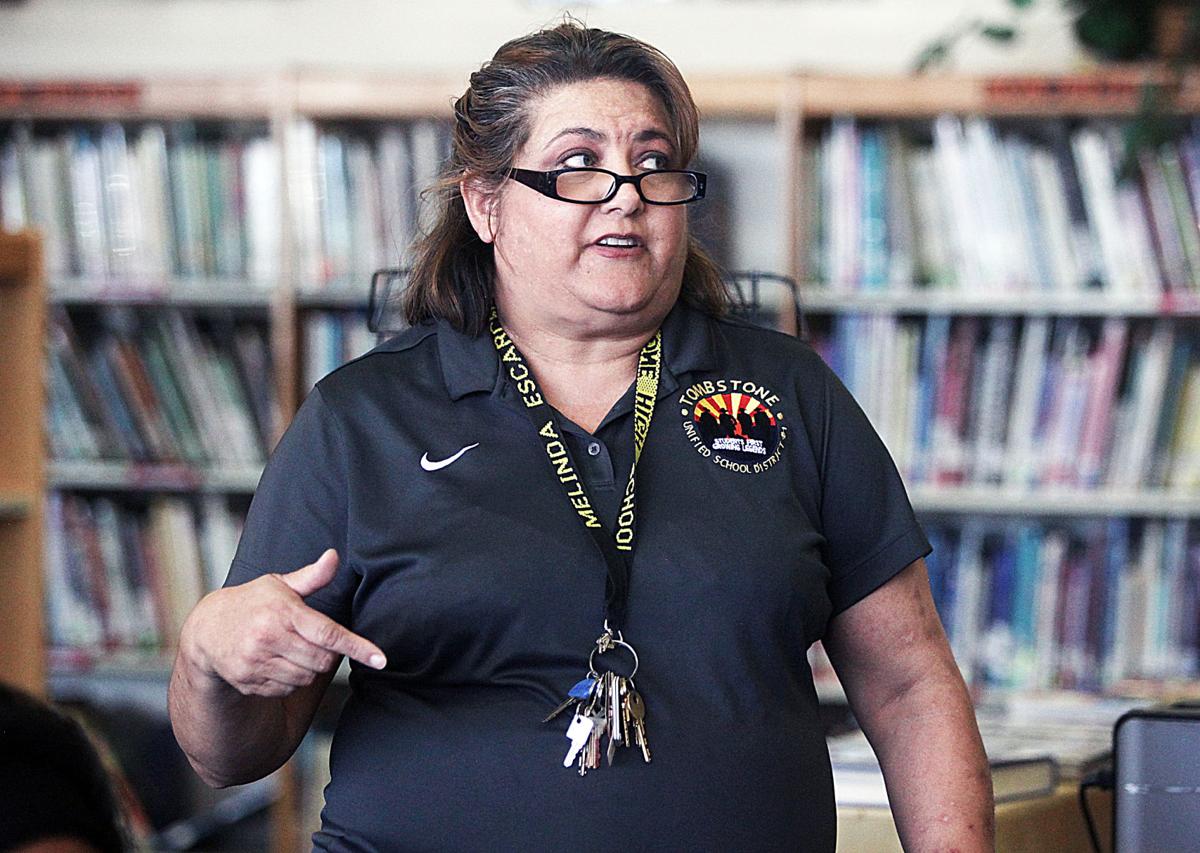 LEFT: Tombstone Unified School District’s Melinda Escarcega gives a presentation to faculty Friday at Huachuca City School. ABOVE: Wearing the black and gold of Tombstone High, she appeared on Wheel of Fortune last Thursday and walked away with more than $53,000 in cash and prizes. 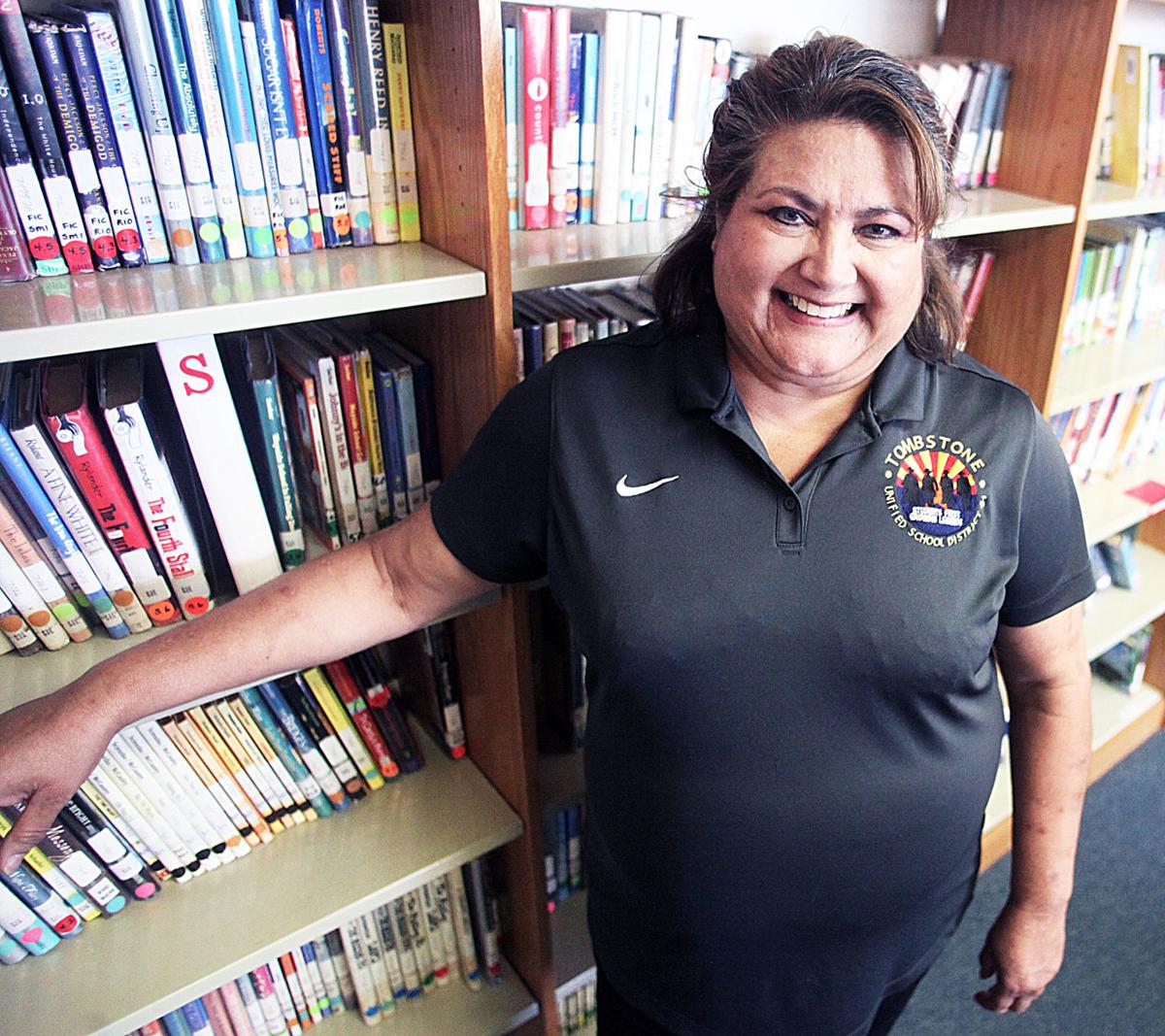 Melinda Escarcega won cash and a car as a contestant on the Wheel of Fortune.

LEFT: Tombstone Unified School District’s Melinda Escarcega gives a presentation to faculty Friday at Huachuca City School. ABOVE: Wearing the black and gold of Tombstone High, she appeared on Wheel of Fortune last Thursday and walked away with more than $53,000 in cash and prizes.

Melinda Escarcega won cash and a car as a contestant on the Wheel of Fortune.

TOMBSTONE — For about as long as she can remember, Melinda Escarcega has been a “Wheel Watcher.”

“My parents are big ‘Wheel of Fortune’ fans, and I grew up watching ‘the Wheel’ with my family. I’m addicted to the show,” said Escarcega, a Tombstone native and former teacher who now works in the Tombstone Unified School District business office. “I’ve always wanted to be one of the contestants on the show. For more than 10 years, whenever the Wheelmobile came to Casino del Sol, I would go to the event, hoping to get picked. A lot of people attend these, and getting your name called to start the interviews and auditions is a random process.”

It took 10 years of Wheelmobile events before Escarcega’s tenacity paid off in a big way.

On the Thursday airing of “Wheel of Fortune,” Escarcega was one of the show’s contestants and she walked away as the episode’s winner with $53,921 in cash and prizes.

Along with $12,500 in cash, Escarcega solved the prize puzzle and won a trip to Panama, followed by winning a 2020 Volkswagen Tiguan after solving the bonus round.

Escarcega’s “Wheel” journey started last March at Casino Del Sol in Tucson, when her name was finally called as a potential contestant.

“I was so excited when I heard my name,” she said. “They call 10 people at a time to the stage, where we did a ‘fast play’ version of the game with the other contestants. It’s an audition, where you introduce yourself and try to stand out by showing your personality.”

At that point, Escarcega had her foot in the door, but still wasn’t sure if she had earned a spot on the show.

“Then I was called back for a second audition, and on that visit I took a timed, written test. The audition is in front of a contestant team, and there were about 50 people there,” she said, describing the selection process.

After that audition, some of the members of the group were dismissed. Escarcega was among those who stayed for an extended amount of time, but still had no idea where she stood in the overall selection process.

“If everything lines up, you get a ‘snail mail’ letter informing you that you’re in the contestant pool, which can potentially extend out over two years,” Escarcega said. “I was thrilled when I received the letter.”

When notified about appearance dates, her first offer was for a taping in August, which did not work well with her work schedule. The second offer was for a Jan. 9 taping, which she accepted.

“I flew to Culver City, California, on Jan. 8, the taping was on the 9th, and I flew home on the 10th,” said Escarcega, whose two daughters, Gabriella, 21, and Dominique, an 18-year-old senior at Tombstone High School, went with her; all three were sworn to secrecy about the show’s outcome until after it aired Thursday.

Even Melinda’s parents, John and Irma Escarcega, both retired Tombstone School District teachers, had no idea their daughter was the show’s big winner.

“A group of about 40 friends and family members gathered at Ringo’s bar and restaurant on Thursday to watch Melinda’s ‘Wheel’ appearance and cheer her on,” Irma Escarcega said. “We had no idea she had won anything at all. We were just excited that she was finally on the show after watching it for so many years. The whole bar erupted with joy when she won the episode. It was so exciting and unexpected.”

Since “Wheel” is a favorite with the Escarcega family, Irma said it was an incredible moment for John and her to celebrate Melinda’s win with so many friends.

While keeping the win a secret was difficult, it only added to the excitement, Melinda said.

“And the fact I was able to share that whole ‘Wheel’ experience with my two amazing daughters made it even more incredible for me,” she said.

Six shows were taped the day Escarcega was at the studio in Culver City.

“The contestant team does a great job of making us feel at ease,” she said. “They walk us through the process so we know what to expect. There’s a makeup crew, we practice spinning the wheel, we’re familiarized with the set and they do their best to prepare us for the airing so we’re comfortable. It’s a well-oiled machine.”

As a longtime “Wheel” fan, meeting Vanna White and Pat Sajak was one of the highlights of Escarcega’s experience.

“Pat and Vanna are so nice to everyone. In fact, the whole production team is amazing,” she said.

Another high point for Escarcega was that friends from all over the country reached out to her when they saw Thursday’s episode.

“My phone was blowing up and my (Facebook) Messenger was out of control,” she said. “I was getting between 60 and 70 messages every half hour. The support I received from friends everywhere was amazing.”