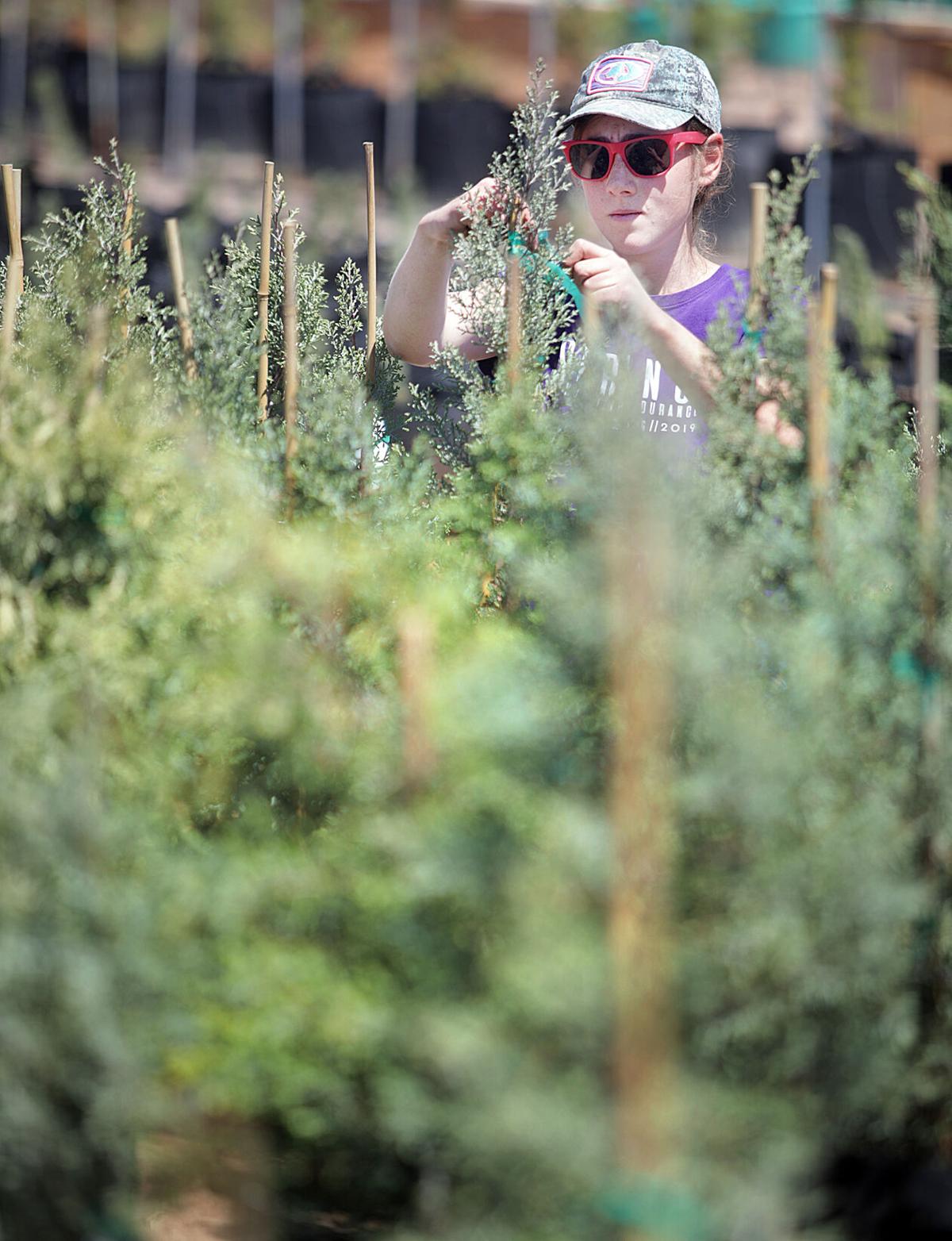 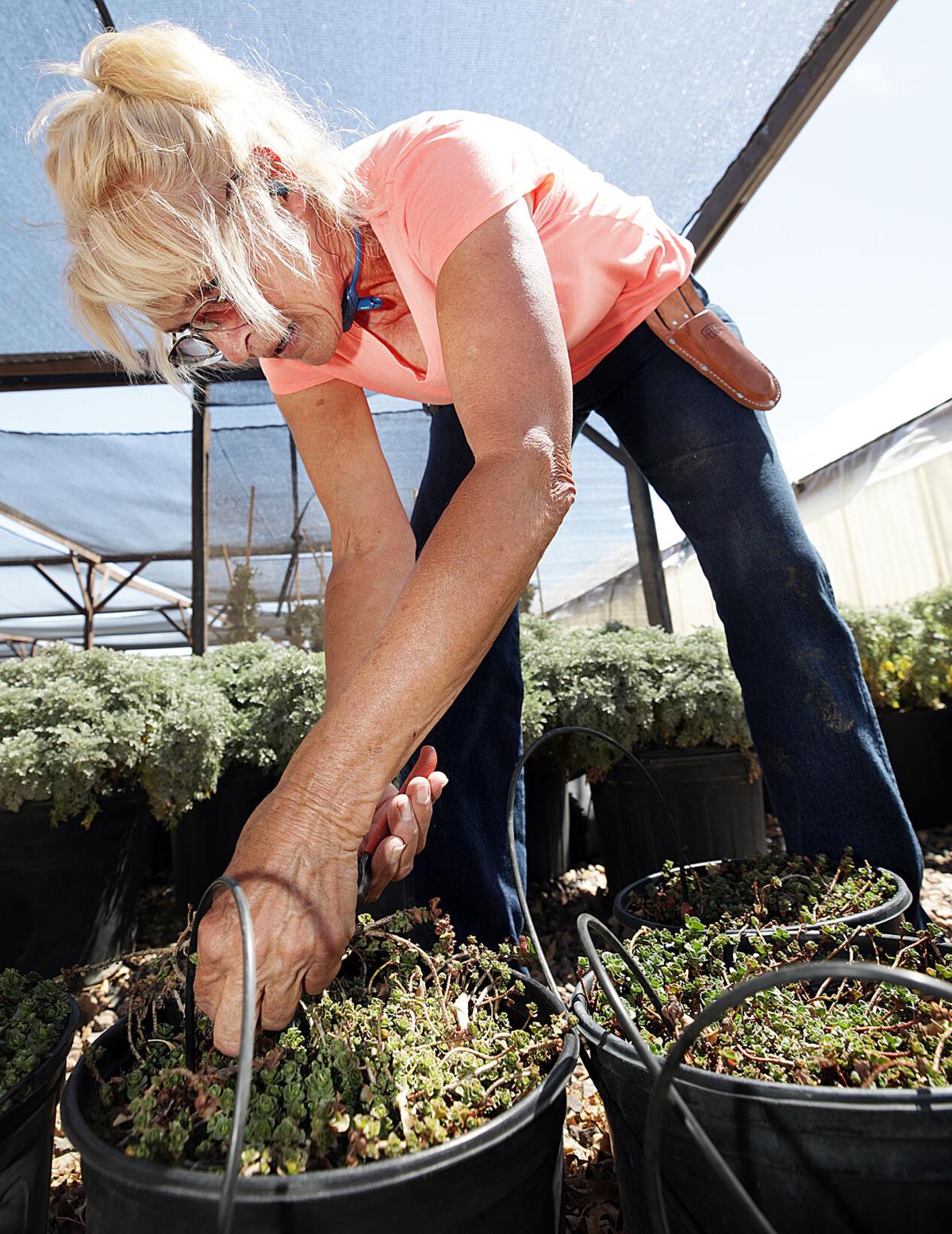 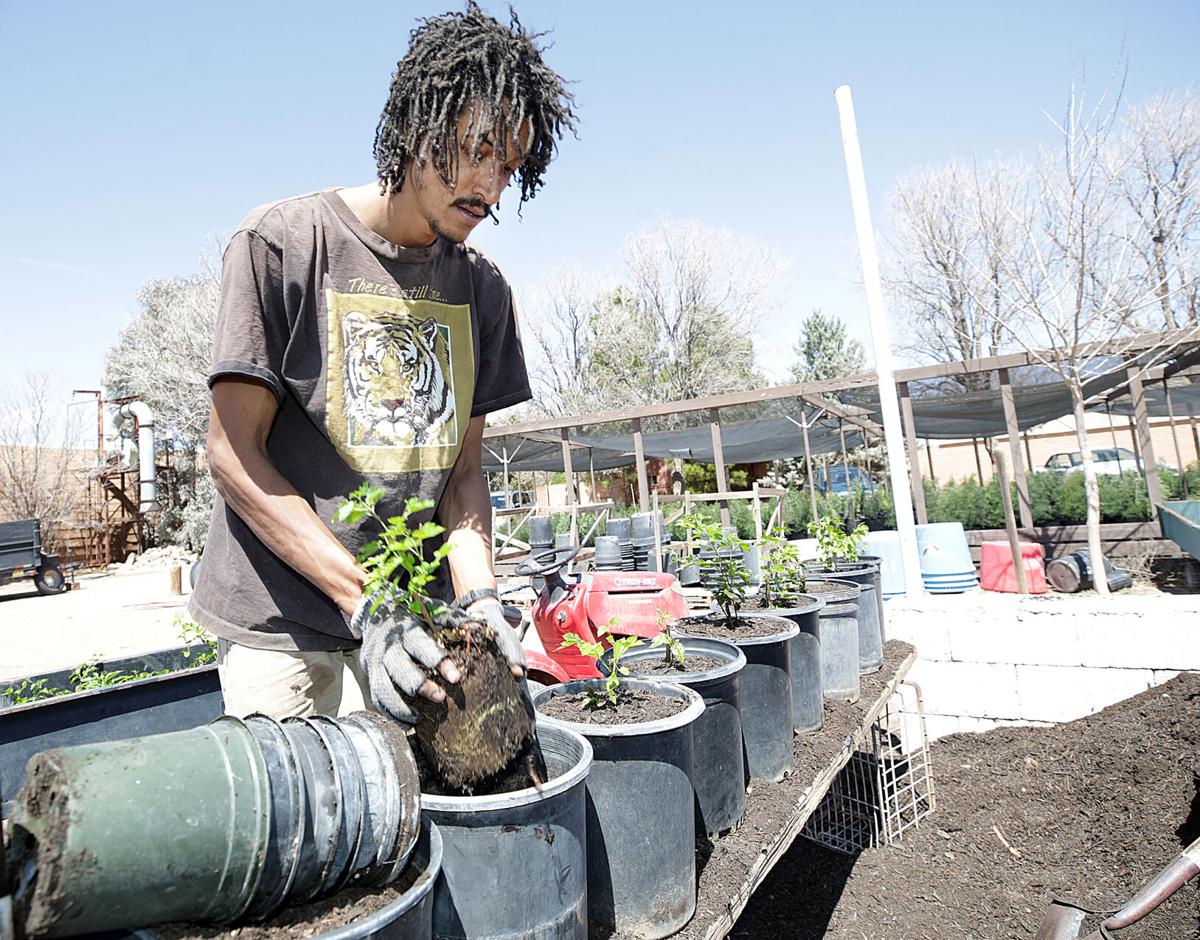 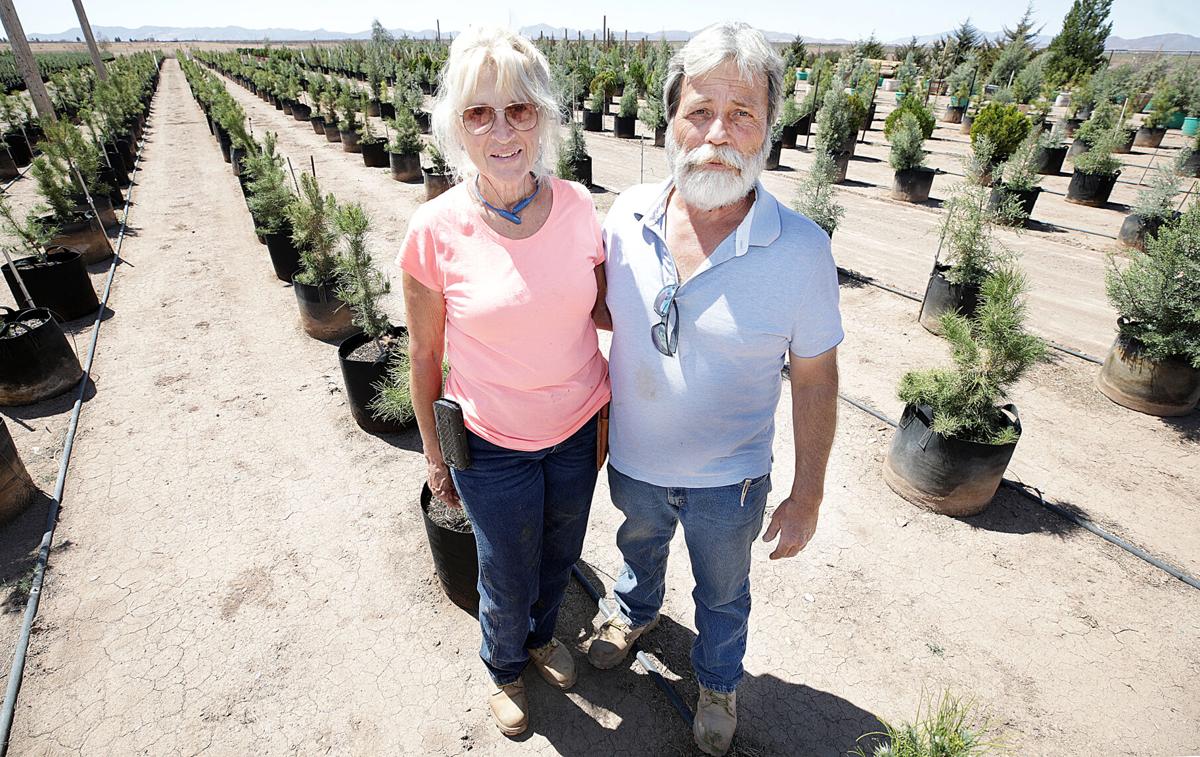 Parkland Tree Farm and Nursery owners Sharron and Ted Park stand amidst a batch of young Afghan pines at their Douglas establishment this week.

Parkland Tree Farm and Nursery owners Sharron and Ted Park stand amidst a batch of young Afghan pines at their Douglas establishment this week.

DOUGLAS — It’s like a forest in the making. Thousands of trees of various heights and species form neat rows and every single one can be planted in not just Cochise County, but just about anywhere in the state.

Parkland Tree Farm and Nursery, run by Ted, a Douglas native and former banker, and Sharron Park, former teacher and administrator, has become a massive enterprise over the past 12 years selling evergreens, shade and fruit trees, shrubs, cacti and so much more.

The Phoenix couple said goodbye to their jobs and “retired” in 2002 to the 11 acre family spread just west of Douglas to tend to Ted’s father after his mother died. The former working farm and ranch with a hay barn, feed barn, cattle barn provided the basic framework perfect for plant yards, greenhouses and an office. It took a lot of work and Ted said remodeling continues.

“I always wanted to grow things,” she said. “When I was a child, I was in 4–H. But, I didn’t have animals like my friends did. I had plants. My momma was a gardener, I was a gardener. Always had that thought that digging is good for the soul.

She laughed, “I came out here with Ted and I said I’m going to grow herbs and vegetables. He said ‘If we’re going to do this. We have 11 acres, let’s do this. And that’s when he said my hobby has gotten out of hand.' I say I was in complete control of my hobby until you got involved. I’m very fortunate to be in my retirement years and do what my passion is. I don’t even know how to put in words. This is my church. This is where I do my meditation, all my praying. It’s a lot of hard work, but it’s good work. And I work with a great guy. My husband is my partner, my soulmate, my everything.”

This year will be their 20th wedding anniversary.

From herbs to trees

Ted saw more possibilities than just herbs. After all, he surmised, who would drive way out in the country just to buy herbs. Better to sell a commodity that could support itself.

At that time, Major Trees in Elfrida was going out of business and the Parks bought some Eldaricas, an easy to grow pine, to boost their own Eldaricas stock they started to grow from seed.

“That was our first actual cash crop,” he said. “From there we started seeds of Arizona cypress, Italian cypress, Arizona ash and other trees. And we just kept going.”

Many of their trees come from cuttings, like mulberries and figs, which begin their new lives in one of the greenhouses. Stalks are planted in small pots and then clear, bottomless water bottles are used to cover them until they develop healthy root systems. When they sprout, they go into larger pots and when they are ready for sale, the trees are planted in felt grow bags in which they can remain for three or four years.

“It makes a porous root ball,” explained Ted. “You can’t overwater them. I get a better exchange of oxygen.”

To plant the bagged trees, the bottom is cut away and the rest of the bag can be shimmied off or carefully cut away and peeled off to protect the rootball.

In the beginning, they used to grow different trees which they found to be not of any value.

“People didn’t like them that much. In a nutshell, most of my customers want something three feet tall that will grow to six feet tomorrow,” he joked. “So, we concentrate on the fast growing trees, on trees for windbreaks and then we added shade trees from there. Being from here, I had a good idea of what would be commercially successful. People like eastern red cedars. They are pretty trees, but they’re slow growers.”

He has a few large red cedars grown from seed over ten years in special wooden containers along a fence line waiting for someone with patience.

They also grow evergreen trees from seeds in tiny peat pots in the greenhouses and those are moved as well into larger and larger pots until the root systems are ready for the felt grow bags which also grow in size as the trees age.

To keep up with demand, they work with other experienced growers to provide some of their stock.

“We’re not here just to sell trees. We give the customer all the information needed for success. We spend a lot of time on the phone and answering emails to help people. We always tell people do not hesitate to call.”

Sharron has a pot house filled with pots of all sizes for all their needs. They recycle everything they can which helps keep costs down. Rather than throw pots away, people can bring their pots to the nursery, too.

Traditionally, the last frost occurs in mid -April, but the trees are not protected. It hardens them and makes them healthier, Ted said.

Sharron stated, “Our fruit trees are late blooming because of the mid-April freeze.”

“Until the mesquites green up, winter is still here,” he noted.

A day in the life

In one greenhouse, Sharron has two foot tall Agastaches, a favorite of butterflies, along with roses she has growing from cuttings. Lady Banks roses climb trellises and will be spectacular when they come into bloom in a few weeks, she says, as she trims back a few limbs.

A typical day for them begins by making sure the fertilizer tank is filled.

As everything is watered through drip irrigation, they are getting fertilized. Plants quickly use up the nutrients in the soil in the pots, she explained. Then it’s on to the greenhouses to check on the humidity and plant health. They did have some problems with javelina, so they check for any damage they may have caused. Then comes the job of moving stock out to the yards for sale to replace what was sold the day before.

“We like to move things around,” she added. “In merchandising, you don’t leave the same thing in one spot for too long. I was in retail for a long time, so that’s in my blood, too. I’m behind right now because some stuff was pulled out of here so fast. I haven’t had the chance to bring everything to the front.”

Though they have industrial matting down, some weeds will find a crevice and poke through, so they have to be removed.

They keep a constant eye on insect pests and diseases. June bugs lay their eggs in the soil and the hatching grubs can impact the roots. All of their plants are inoculated against milky spore and sometimes they have to resort to fungicides, but only if they need to prevent the spread of disease. For the most part, they use organic methods to help any infected plants.

“We share this planet with all kinds of God’s creatures,” she said. “Sometimes they’re our friends and sometimes they are not.”

Once some stock is sold, they have to replace them in the rows, said Sharron.

It is not an easy job and work is always ongoing, Ted said.

All this is done while also waiting on their customers.

A ‘family’ affair“Since we live close to the border, you’d think we’d have plenty of laborers,” he said. “But, no.”

Over the years, the Parks have treated their workers well with higher than normal wages to keep them and often employ their family members who need work.

“We have a great crew. They’re part of our family,” Sharron said. “We help them with college, help them their first cars and homes. They’re like my grandkids.”

Customer base continues to grow

As would be expected in Spring, they have been busy with both retail and wholesale customers from as far away as Tucson and Phoenix.

“Fall and Spring are busy time,” he said. “But, we never took a dip in sales in January of February.”

He points a row of trees which are the remaining pines from 5,000 trees her got last January. He sold, 4,990 of them. In various stages of growth are thousands more.

They have received a lot of positive comments and support from social media. “That’s been a lot of fun for us to read. I enjoy our customers. We have homeowners and people who are just moving in coming to see us,” Ted said. “We’ve shipped out orders for customers in northern Arizona.”

Sharron added, “It’s been phenomenal. I tell my customers when the COVID–19 happened, a lot of people were losing jobs, their businesses. We just exploded. It really has been pretty steady all along. We’re tremendously blessed.”