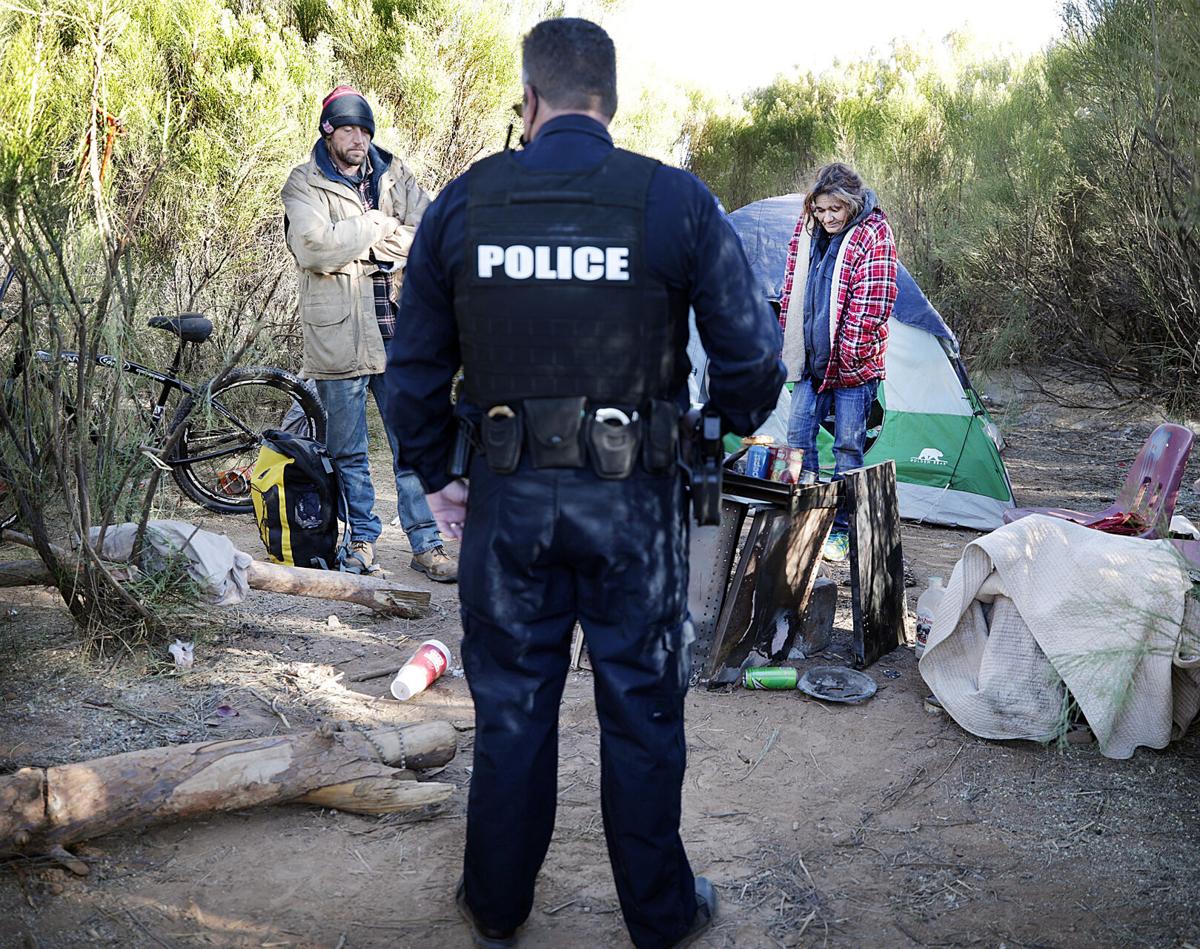 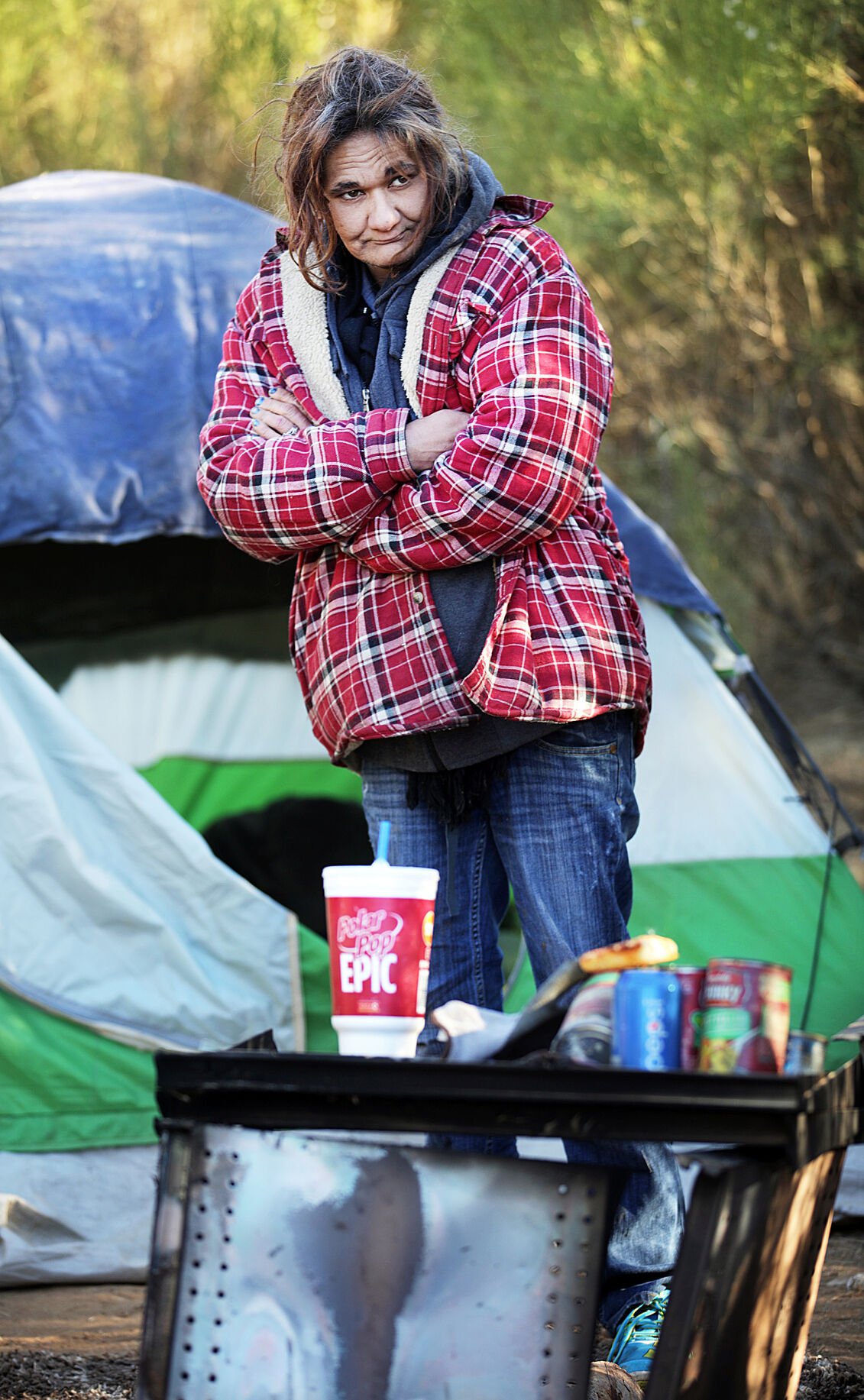 Esther Johnson stands in a homeless encampment early Friday morning in Sierra Vista. Johnson was questioned by Sierra Vista Police and asked to vacate the area. 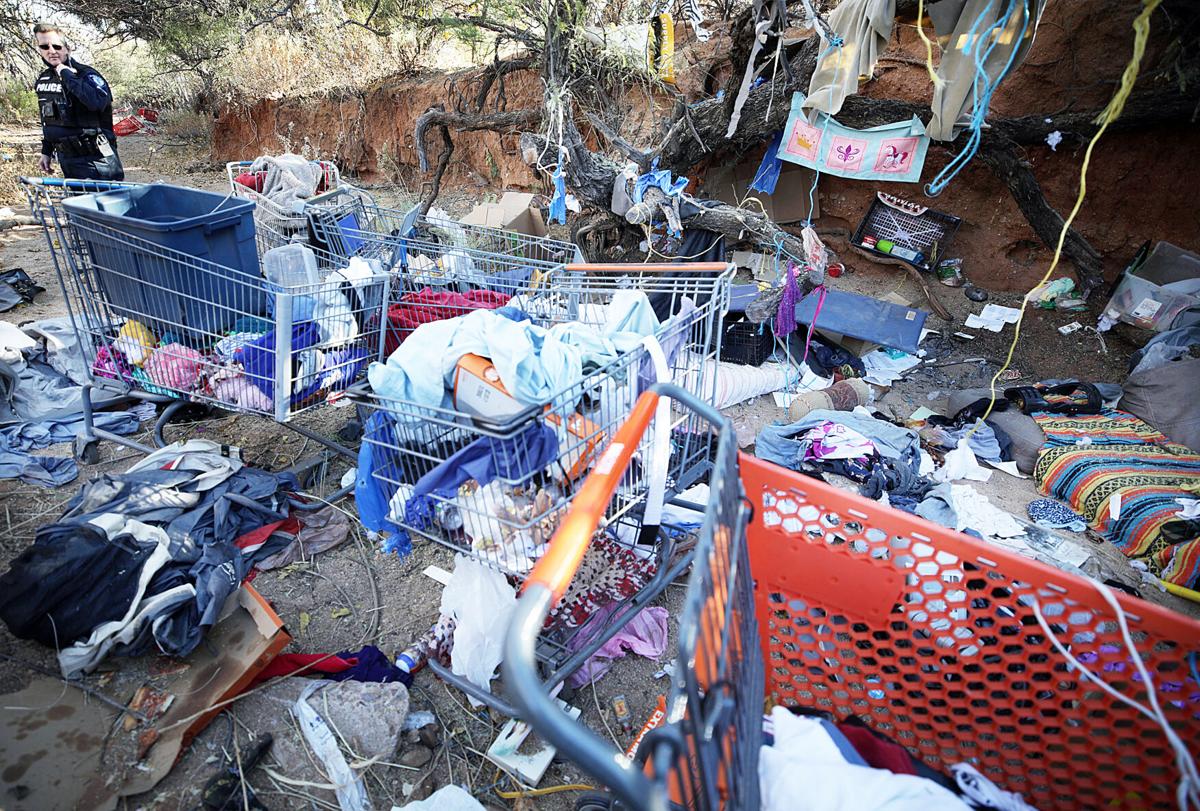 Corp. Scott Borgstadt talks on the radio as he looks over another trash-strewn homeless encampment on private property in the eastern portion of Sierra Vista. 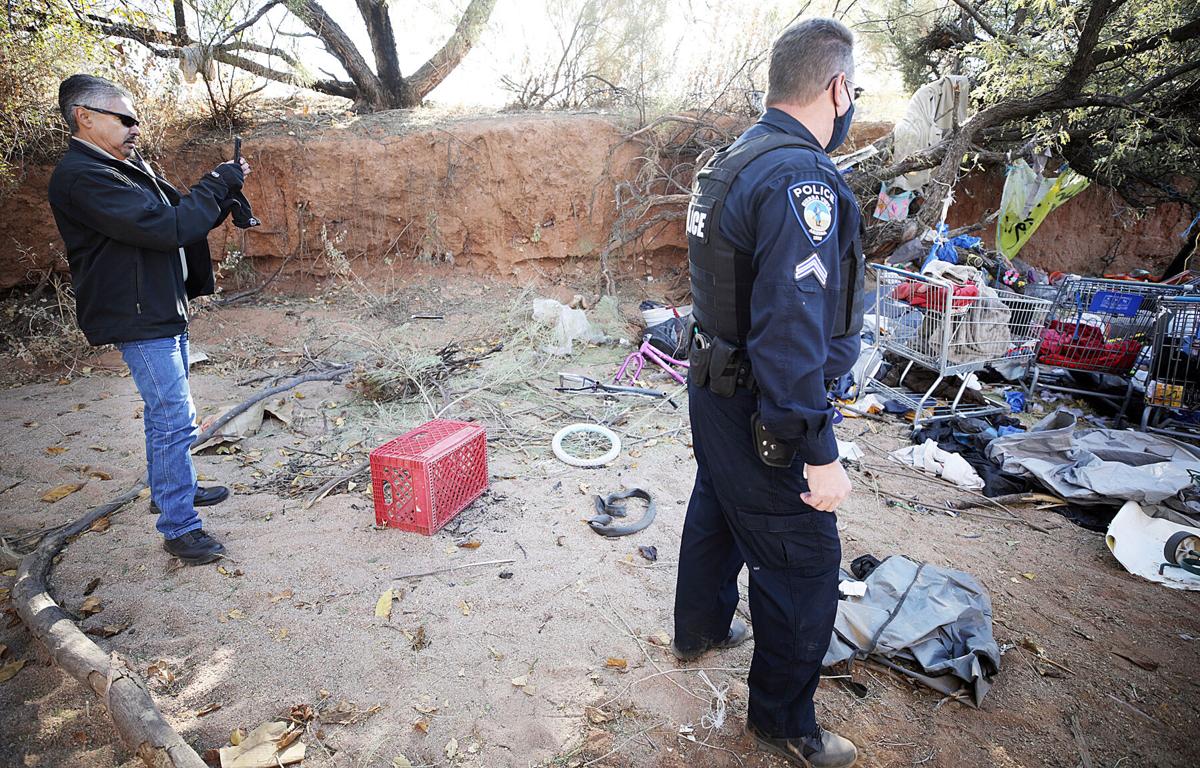 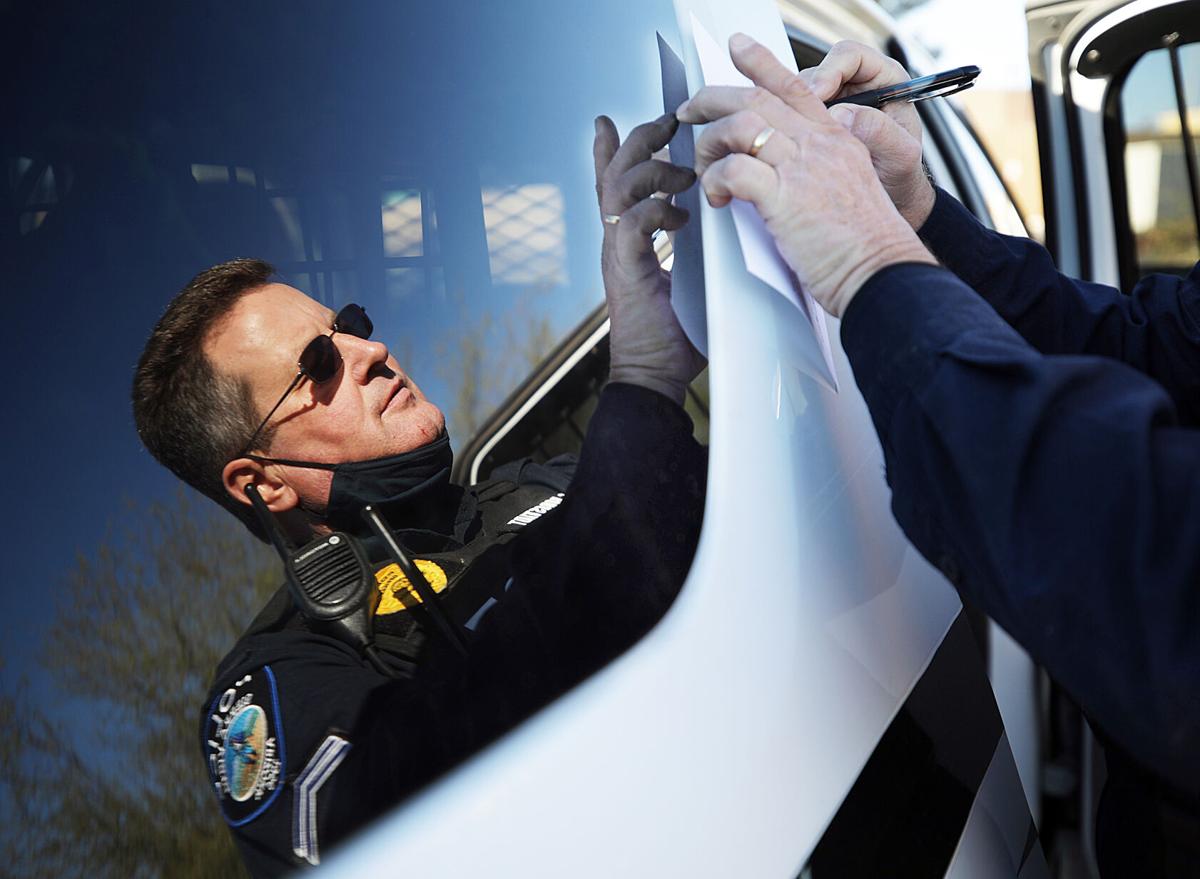 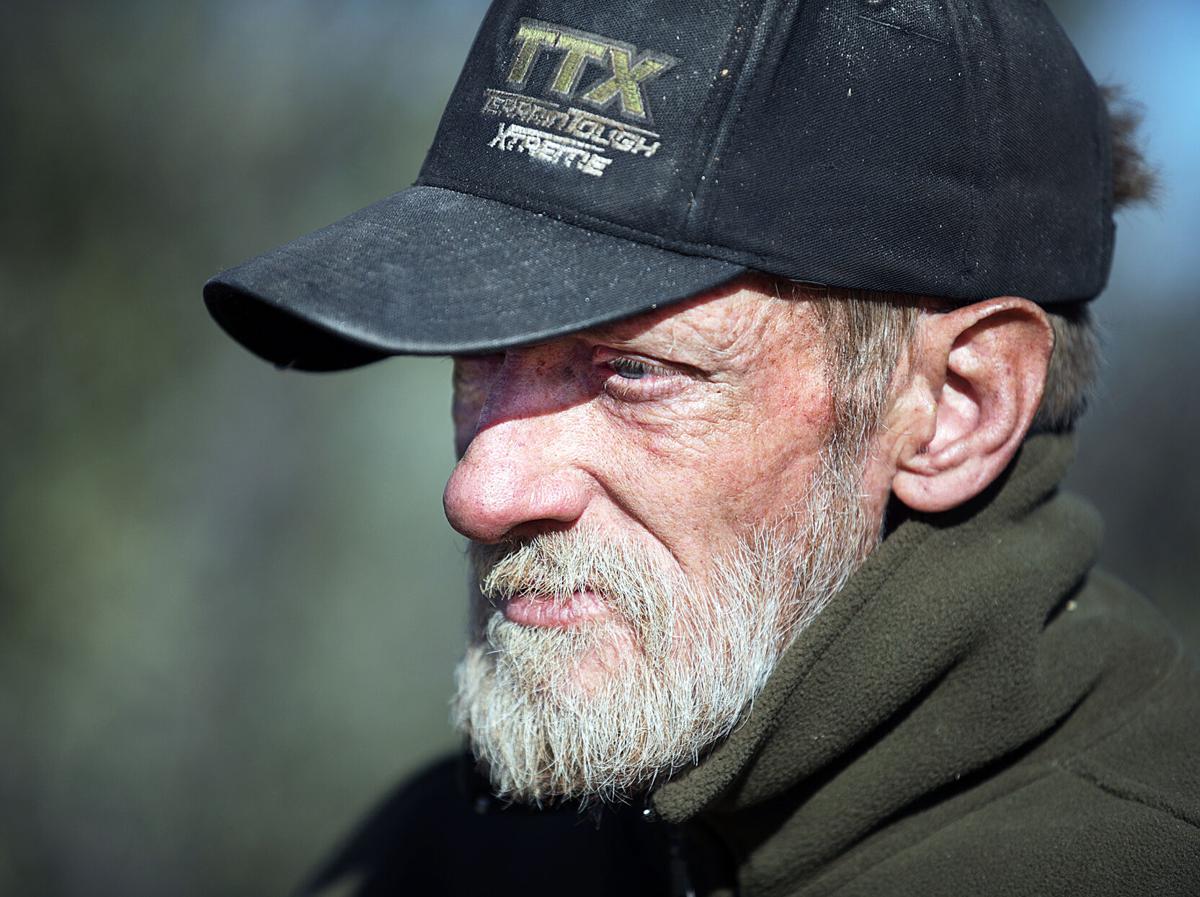 Homeless man Robert Amundsen speaks with SVPD at the encampment he was staying at. 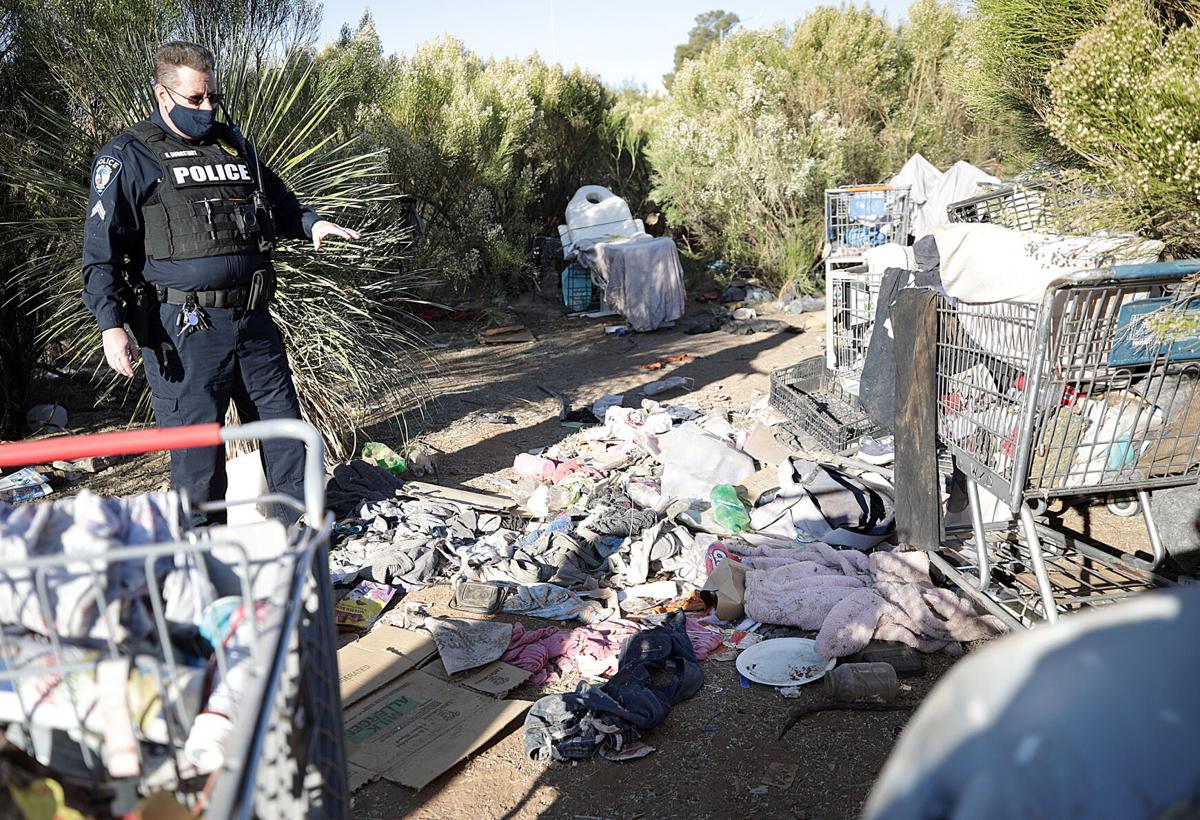 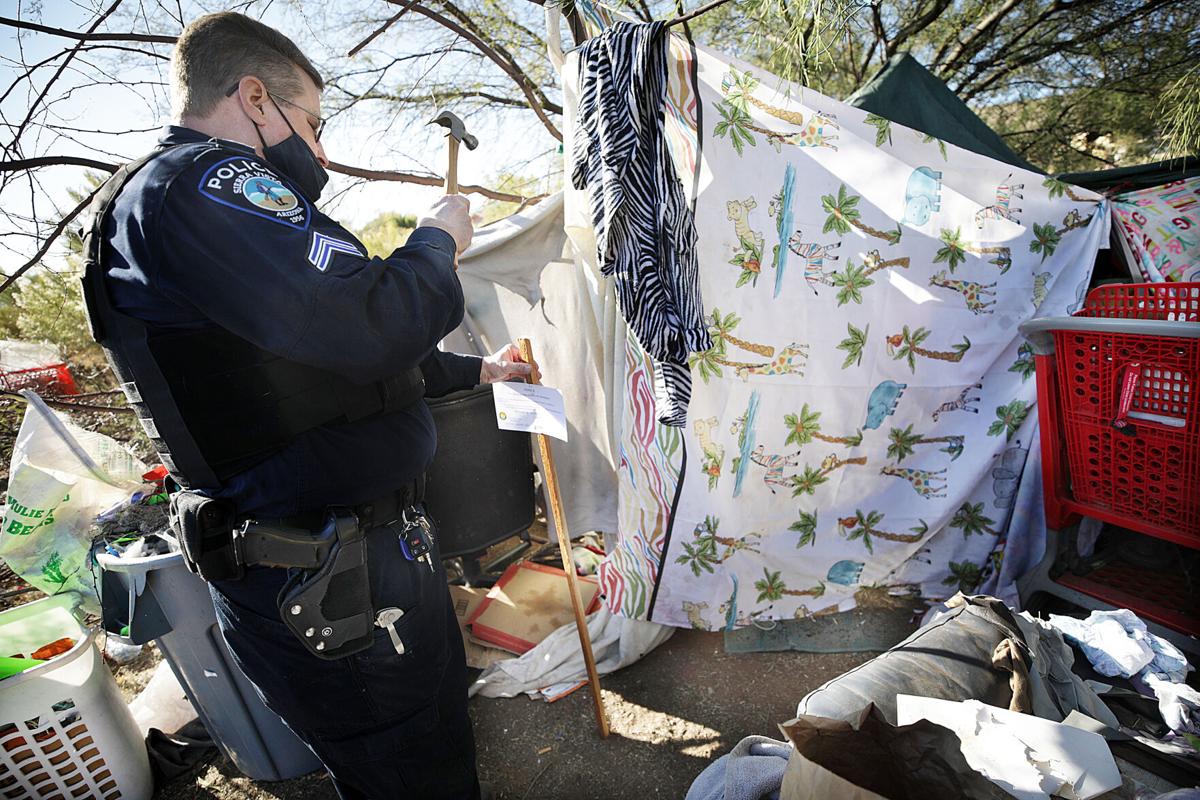 After filling out a “vacate” form, Corp. Scott Borgstadt positions the sign in a conspicuous location at a homeless encampment. 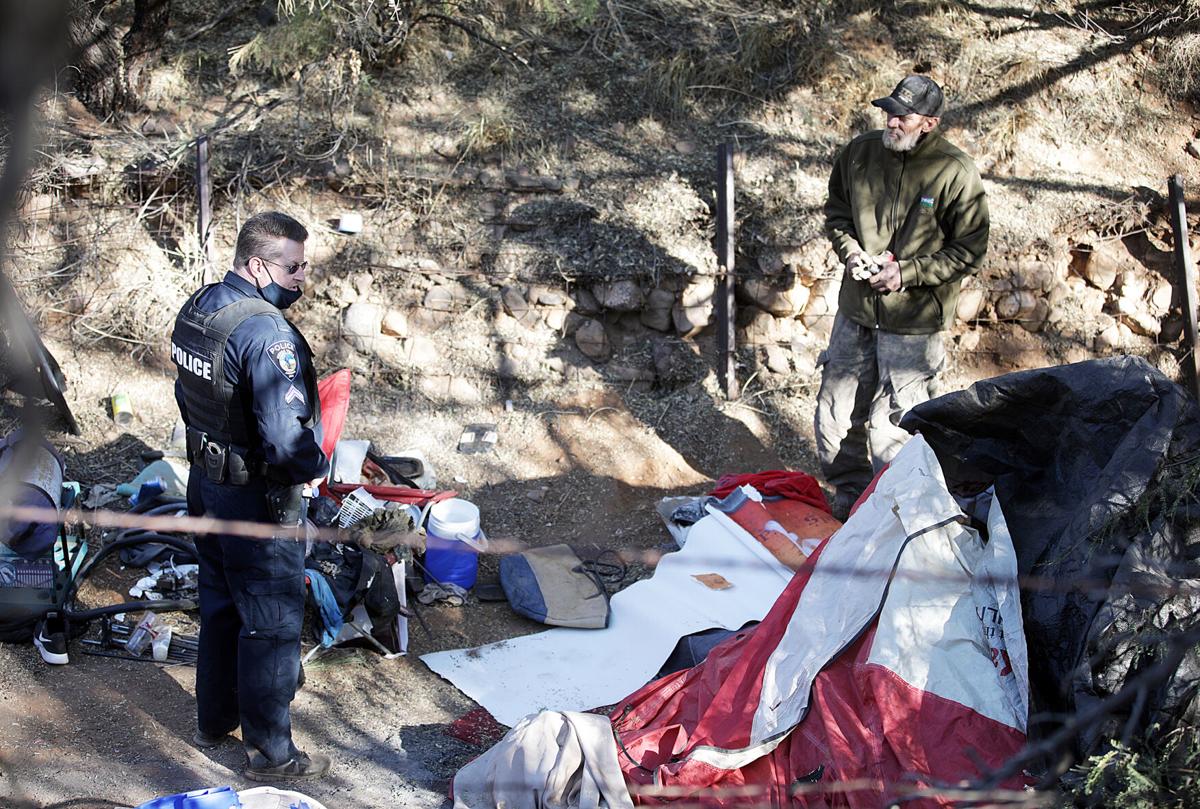 Robert Amundsen talks with Corp. Scott Borgstadt Friday morning in a gulley where his encampment is. 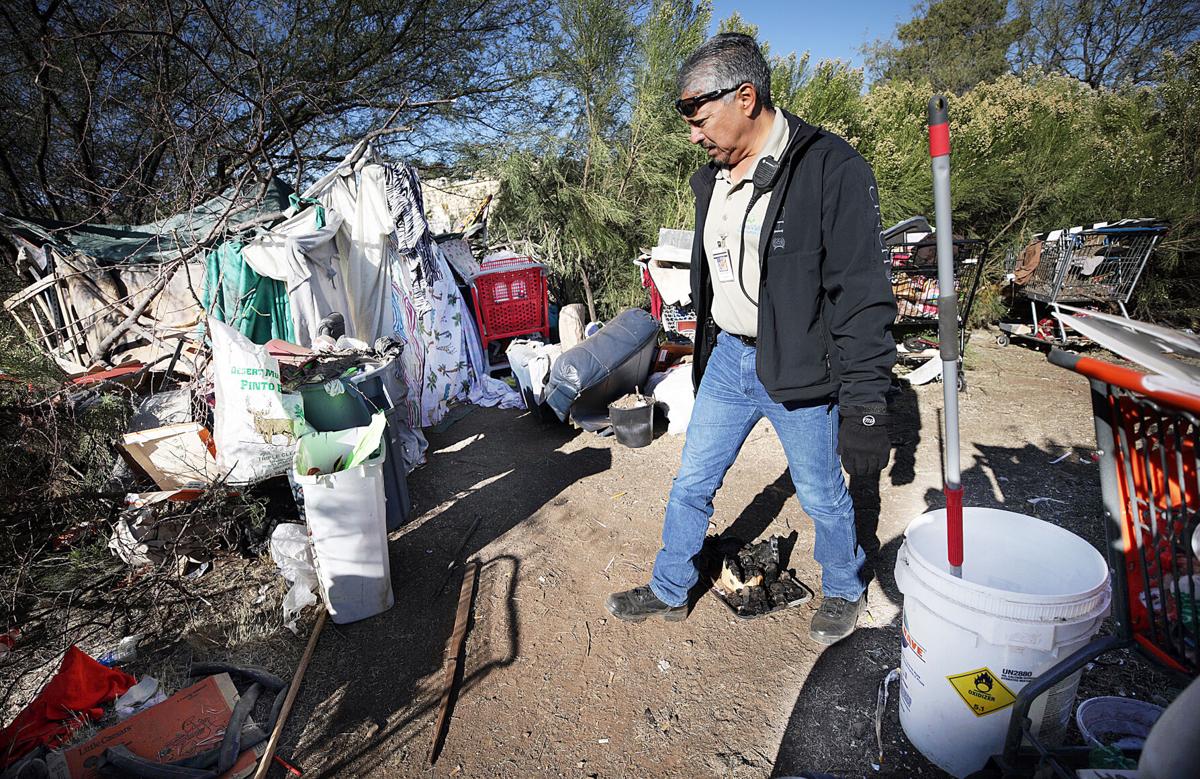 Esther Johnson stands in a homeless encampment early Friday morning in Sierra Vista. Johnson was questioned by Sierra Vista Police and asked to vacate the area.

Corp. Scott Borgstadt talks on the radio as he looks over another trash-strewn homeless encampment on private property in the eastern portion of Sierra Vista.

Homeless man Robert Amundsen speaks with SVPD at the encampment he was staying at.

After filling out a “vacate” form, Corp. Scott Borgstadt positions the sign in a conspicuous location at a homeless encampment.

Robert Amundsen talks with Corp. Scott Borgstadt Friday morning in a gulley where his encampment is.

SIERRA VISTA— Hidden from view behind buildings, below street level in washes and culverts and on any spot of open desert where one can blend in with the mesquite and the tumbleweed are the city’s homeless.

Amid mounds of garbage, filthy clothes, stolen grocery store shopping carts, discarded food containers, crushed milk cartons and the occasional syringe and empty booze bottle are pup tents and makeshift shelters fashioned from anything that can be used to keep out the elements.

These are Sierra Vista’s homeless camps.

Every week, Sierra Vista Police Corp. Scott Borgstadt and the Code Enforcement team venture out to check on the camps and determine if people have moved on, if new individuals have taken their place or if the camps are deserted.

The camps are erected on private, city or state land, says Borgstadt, and it’s not cheap to clean up what’s often left behind. Recently, Code Enforcement officer Gilberto Fuentes said, the city had to pay $20,000 to clean up the refuse at homeless camps in five culverts owned by Sierra Vista.

Once a camp is found, police will tell the people staying there that they have three days to vacate. If no one is around, Borgstadt will leave a sign stapled to a stake and plunge that into the ground where it can be seen by the occupants, usually in front of a tent.

The veteran policeman keeps a detailed and alphabetized binder with information about every homeless person he encounters. There are notes under the person’s name and if available, their photograph.

A lot of times Borgstadt and the code enforcement officers will help people on the spot.

“We’ve run across people with animals and we call out animal control to bring them food,” Borgstadt said. “I usually ask them, ‘What do you need?’ One gentleman told me, ‘I need a pair of shoes. I lost them or they were stolen.’ I was able to go to the Salvation Army and get him a pair of shoes. We try to help them out as much as we can immediately.”

Borgstadt said the city can only do so much.

“At some point they have to make a decision that they need help and they have to go into some sort of program to get them out of this situation,” he said.

Borgstadt points most people to various organizations that help the homeless. Many address issues of addiction. If he determines the person is a veteran, he will call Tim Kirk of the Warrior Healing Center in Sierra Vista.

Unfortunately, not everyone jumps at the chance for help and change of lifestyle, Borgstadt and Fuentes said.

“What I don’t think the general public understands is that many of these people choose to live this way,” Borgstadt said. “They choose their addictions over living the conventional way like you or me.

“Blindly giving them money (to help them out) is not right. Most of the time it just goes to feed their addiction.”

Kirk agrees that addiction is the likely culprit fueling homelessness of many of the people Borgstadt and his team run into. He said homeless veterans, however, most often suffer from a different set of issues, such as post traumatic stress disorder resulting from combat. Kirk said PTSD drives malnutrition, alcoholism and depression.

“This is a person who served their country and went to war and there are a different set of sensitivities,” Kirk said. “Many of them (veterans) can’t keep a job because they suffer from PTSD.”

Many of the homeless veterans Borgstadt refers to Kirk’s organization are guided by volunteers who are veterans and who at one time were also homeless, Kirk said.

The city is working on launching a program called Better Bucks that involves giving the homeless vouchers that can be exchanged for food, toiletries and other essentials. Narcotics and alcohol and some household items that can be used as drug paraphernalia cannot be purchased with the vouchers. The program is modeled after one in Flagstaff.

Friday morning, Borgstadt and Fuentes visited four homeless camps within walking distance of each other just east of the Food City grocery store and south of State Route 90. Three of the camps were occupied.

As Borgstadt approached a tent pitched in the center of a well-hidden spot ringed by mesquite, he announced his presence. Seconds later a dishevelled man and woman emerged. The woman, 33-year-old Esther Johnson, was familiar to Borgstadt because he’s warned her about trespassing before. The man, 41-year-old Jason Mullins, told Borgstadt he was helping Johnson “clean up the area.”

Borgstadt mentions to Mullins and Johnson the groups that offer assistance, but neither seems enthusiastic about the idea.

“I’ve got a phobia about being (closed in) with other people,” says Mullins, who has been homeless for two years.

Johnson, who hails from Arkansas and said her two children are staying with relatives, complained about some of the rules and requirements at one of the organizations Borgstadt suggested.

“Unfortunately, a lot of times the reason they don’t seek the help is because of rumors they hear on the street,” Borgstadt said. “Another issue we run into a lot of times is addiction. You cannot be intoxicated in any way, so folks just don’t go.”

Borgstadt and Fuentes spot an abandoned camp piled with garbage — including a cell phone and some tools — where two 20-year-olds had stayed a few days ago. The pair is addicted to methamphetamine and Borgstadt was able to get them help. When he followed up with officials at the organization he had referred the couple to he learned the pair had failed to follow up because of their addiction.

A few yards from that site, Borgstadt and Fuentes found another trashed camp deep inside a culvert just below State Route 90. A filthy, tattered tent was pitched in the dirt. Robert Amundsen poked his head out. He shimmied out of the culvert and said he’s been homeless for about a year.

Amundsen said his mother obtained a restraining order against him. He admits to having a “drug and alcohol problem,” says he has a bad leg and eats whatever he can out of trash cans. He says he’s 54, but his face is weathered and lined with creases that make him look older.

Amundsen and his friends are familiar with the organizations that help the homeless, but like Mullins and Johnson, he does not seem too interested.

“Their rules, a lot of people don’t like them,” Amundsen says.

Borgstadt is not surprised. He said many of the folks he runs into simply do not want to change their lifestyle if it involves giving up their vices.

Occasionally he has come across individuals who keep their campsites clean and just want to live away from society. They do not beg for money or stand at bustling intersection holding signs.

“There is one gentleman I run into on a regular basis,” Borgstadt said. “He tells me, ‘I just want to be left alone, why can’t you just leave me alone?’

“But those are the minority. The majority we see is the people out here, many who make a living panhandling. The community needs to know that.”

Resources for those in need