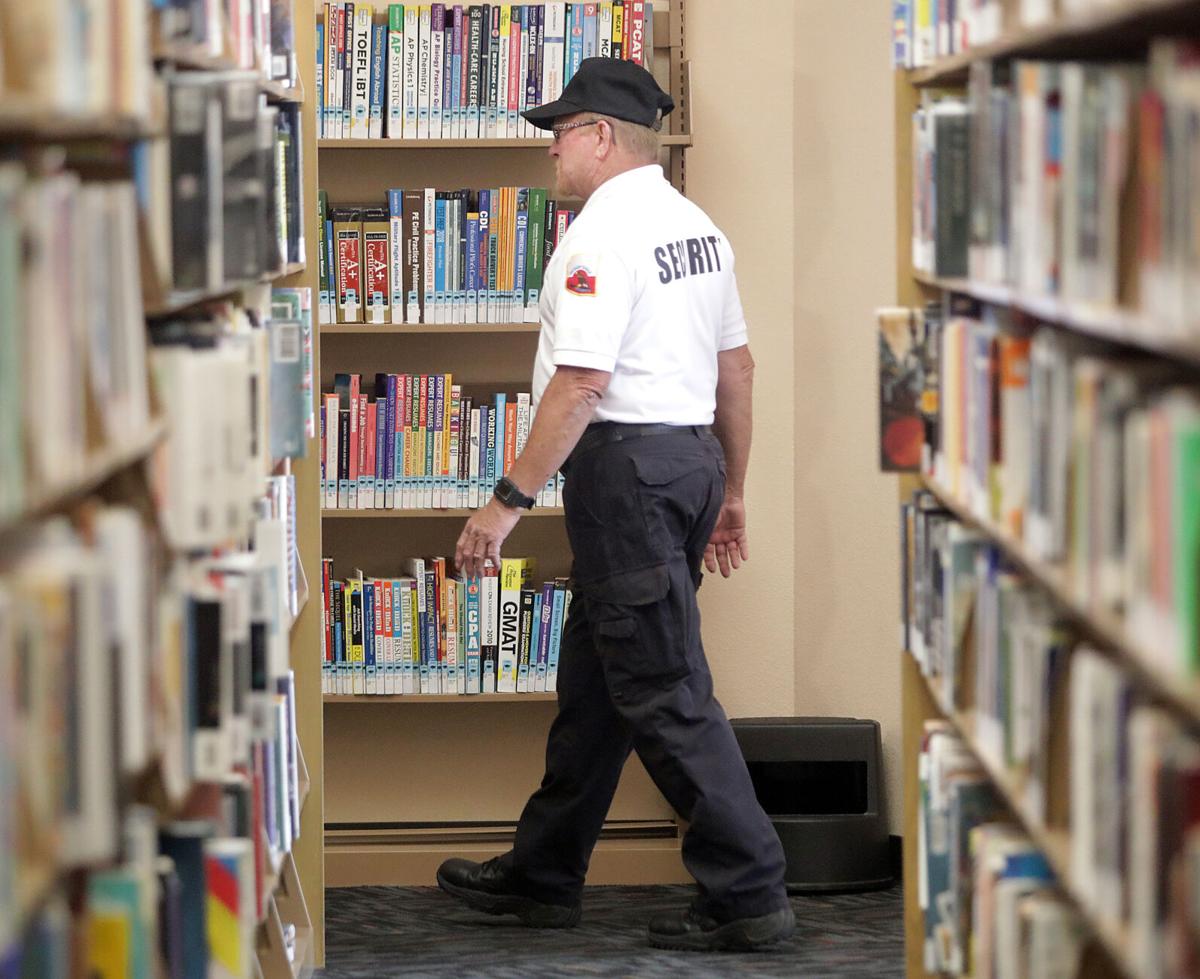 Desert Eagle Security Chief Eugene Grinde patrols the Sierra Vista Public Library Tuesday. There have been problems at the library with what the assistant city manager called 'unruly patrons.' 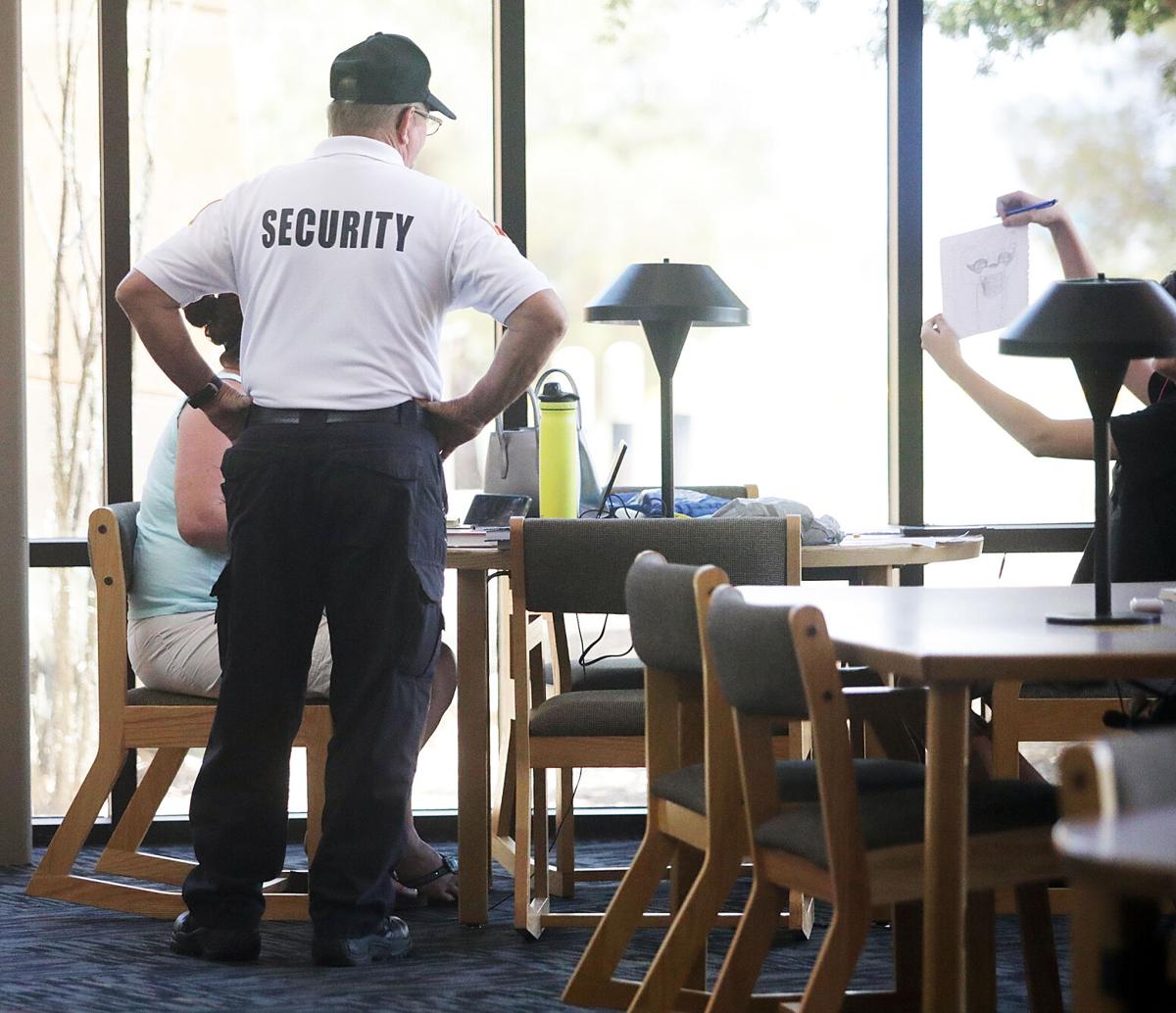 Desert Eagle Security Chief Eugene Grinde patrols the Sierra Vista Public Library Tuesday. There have been problems at the library with what the assistant city manager called 'unruly patrons.'

SIERRA VISTA — A security guard now roams the public library here making sure there’s no unruliness among the stacks and no impropriety amid the computer terminals.

The problem was such that the city had to set aside $30,000 in its upcoming budget to pay for the security guard’s salary, said Deputy City Manager Victoria Yarbrough at a recent City Council work session.

“There are a number of unruly people who like to visit the library,” Yarbrough told council members in mid-June. “It’s not all just quiet people checking out books and looking at the internet.

“There are, unfortunately, some problems over there and we believe a security guard will help.”

The Sierra Vista Public Library is not alone in dealing with an issue that many people may not be aware of.

Public libraries are generally regarded as sanctuaries of silence where people go to read, check out books, research information and study. But several published articles show that because they are open to everyone in a community, these bastions of knowledge attract both well-intentioned and not-so-well-intentioned patrons.

An internet search of “security guards at public libraries” brings up a series of articles on the issue of protecting good library visitors from bad ones. One book, an 80-pager titled “The Black Belt Librarian,” was written by Warren Graham, the former security manager at the Public Library of Charlotte and Mecklenburg County in North Carolina. Graham offers several tips on how to keep public libraries safe.

Another article by Ben Robinson, a community youth librarian at Hamilton Public Library in Hamilton, Ontario — which appeared in 2019 on a website called In the Library With a Lead Pipe — is titled “No Holds Barred: Policing and Security In the Public Library.” The piece describes incidents of violence at some public libraries, including a sexual assault and the murder of a librarian.

On the question-and-answer website Quora, a reader asked, “Why would a library need a security guard?”

The response from one of the experts on the site was similar to what Sierra Vista’s Parks and Leisure Services Director Laura Wilson told the Herald/Review: “Libraries attract all kinds of people, including high risk individuals.”

The Quora response said: “That’s why proper security is essential, and it should go beyond just CCTVs and digital monitoring systems. Many library management teams dismiss security concerns or cut corners by not hiring enough security guards. The guards will monitor the flow of traffic into and out of the library, making sure people don’t enter restricted areas. Vandalism is common in public libraries and can prove to be very expensive if it isn’t handled quickly. Security guards know how to spot vandals and will stop them before they cause extensive damage. Guards will also make sure individuals with a history of vandalism don’t enter the library.”

Wilson said the issues at Sierra Vista’s public library mostly occurred before the library was shut down in March 2020 at the onset of COVID-19. When the facility reopened recently, the city enlisted the help of the Arizona Rangers. The Rangers, though, could not commit to protecting library patrons on a regular basis.

Wilson said city officials have been talking about getting protection for the public library for the last three years.

“People want to be able to go to the library and feel like it’s a safe haven,” said Grinde, who along with others from his company will be patrolling the library five days a week. “We’re here to make sure everyone can enjoy the library in a safe environment.”