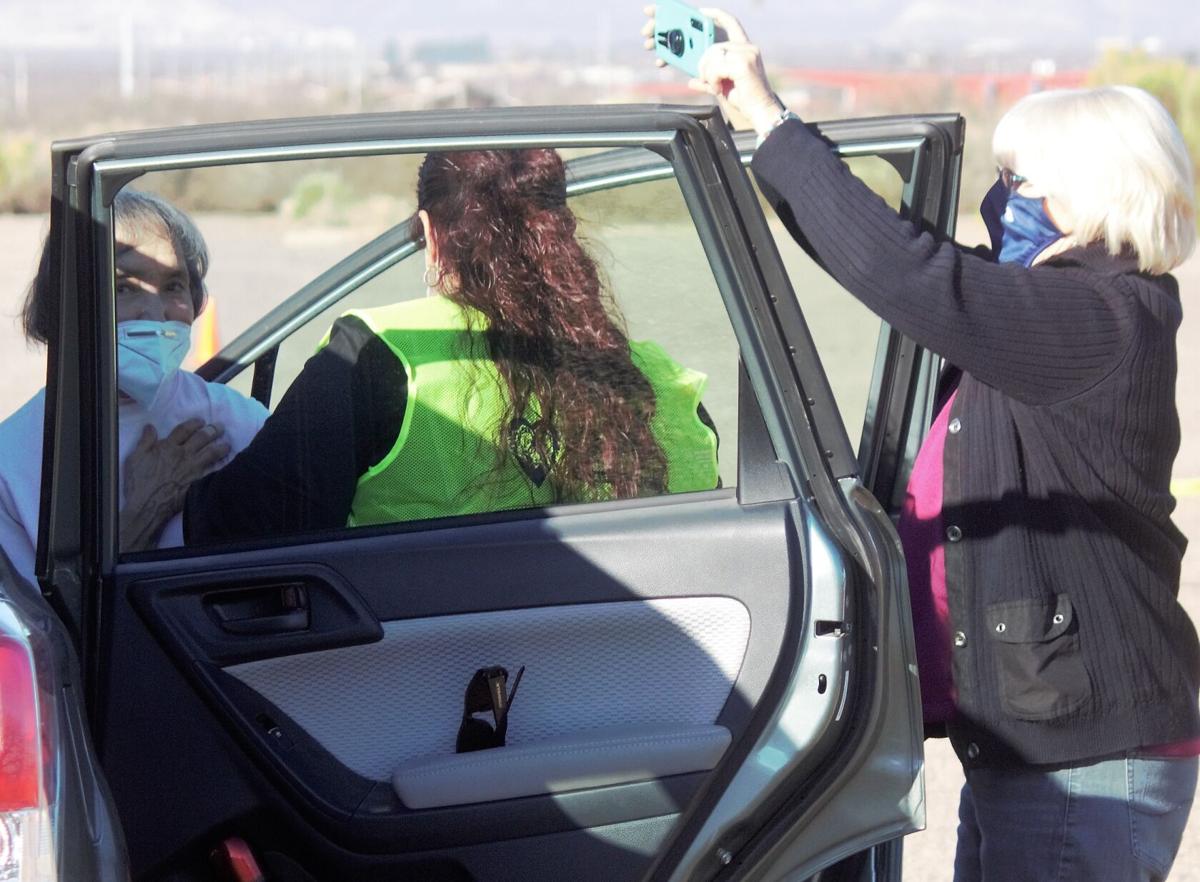 Joey Mitchell of Sierra Vista takes a picture as her aunt, 86-year-old Elia Harris, is administered the Moderna COVID-19 vaccination Saturday in Douglas. 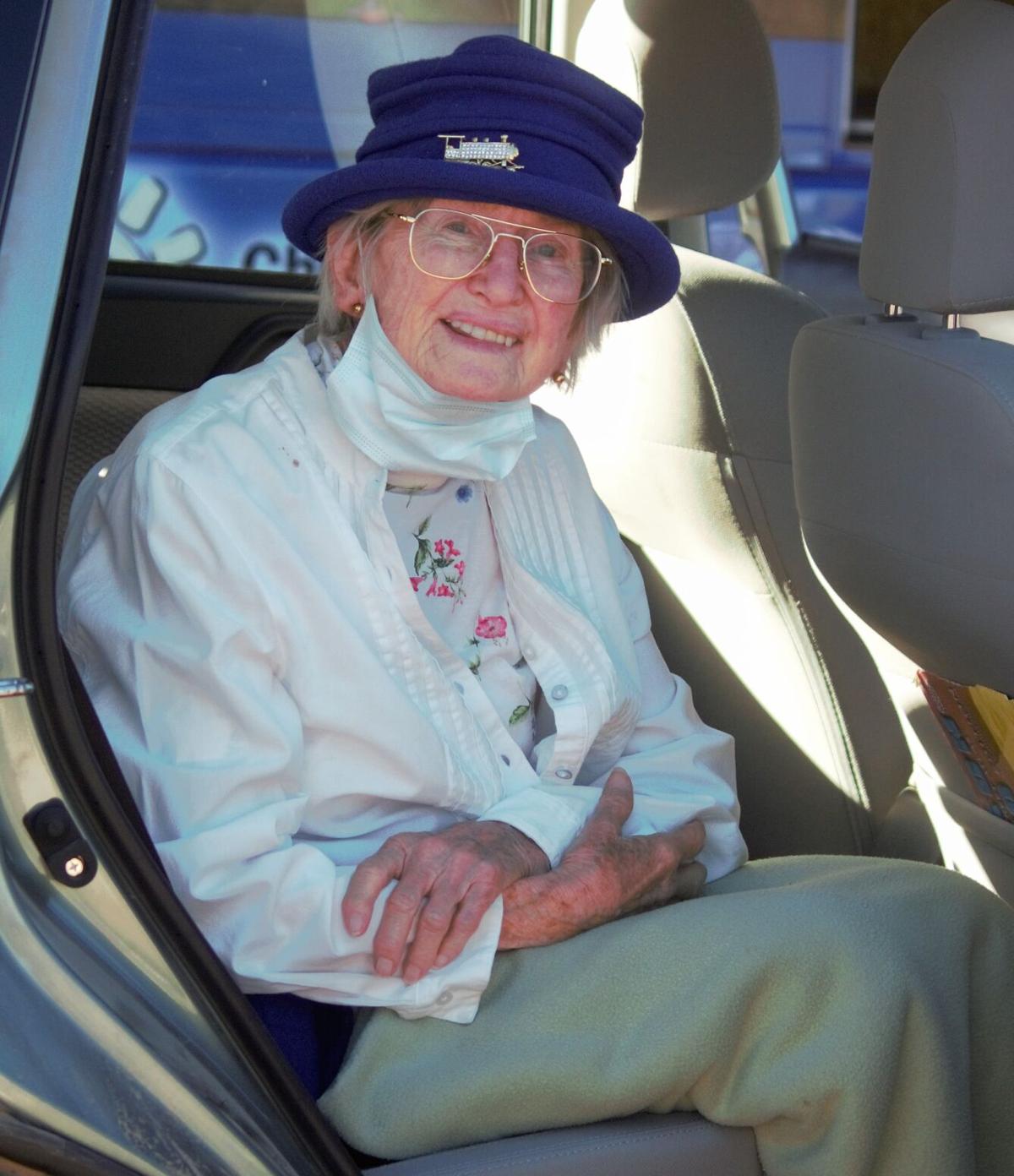 S Martha Montevallo, 98, of Huachuca City, is all smiles after getting her Moderna COVID-19 shot Saturday. 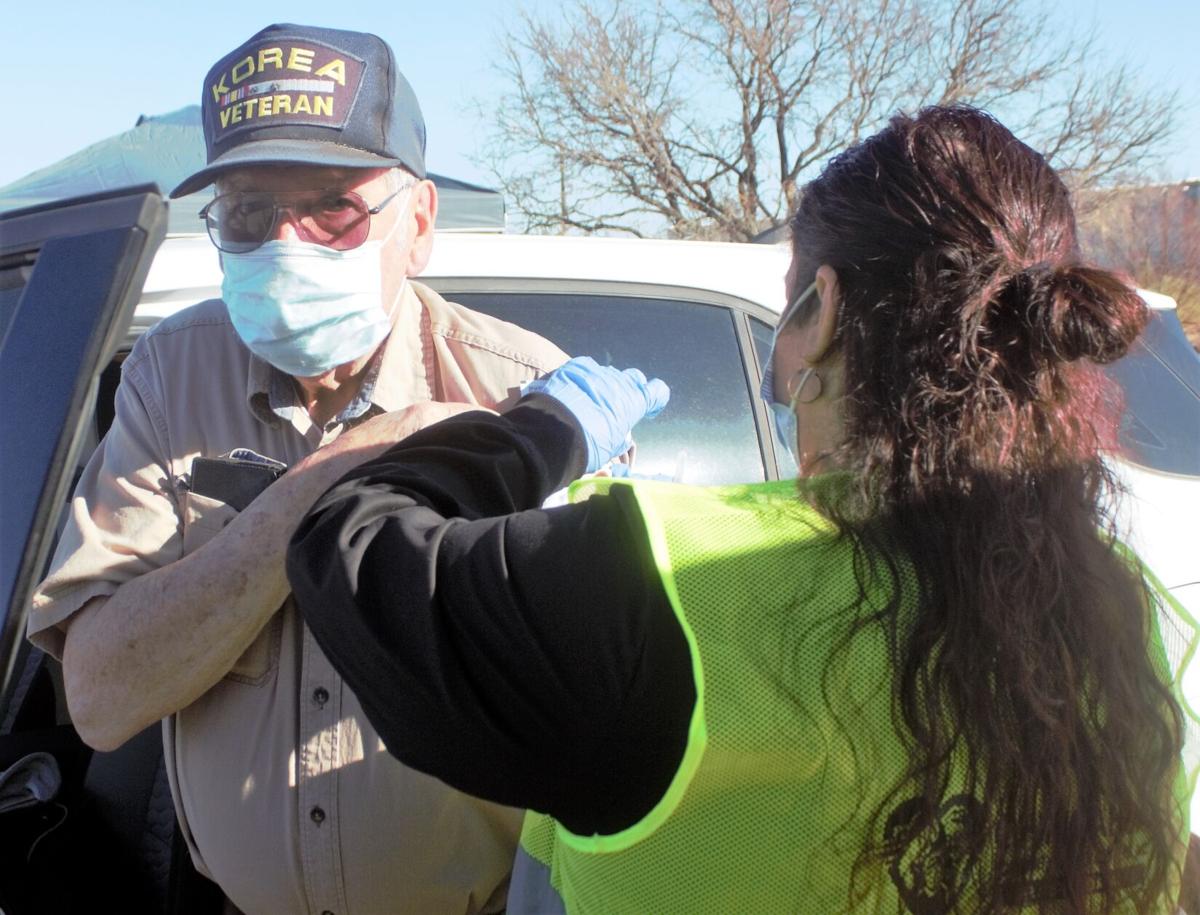 Henry Yeoman of Portal, a retired U.S. Navy veteran, said this shot was "nothing" when compared to the rounds of inoculations he received prior to leaving for Korea. Giving Yeoman the injection is Lizeth Hernandez of CCHCI. 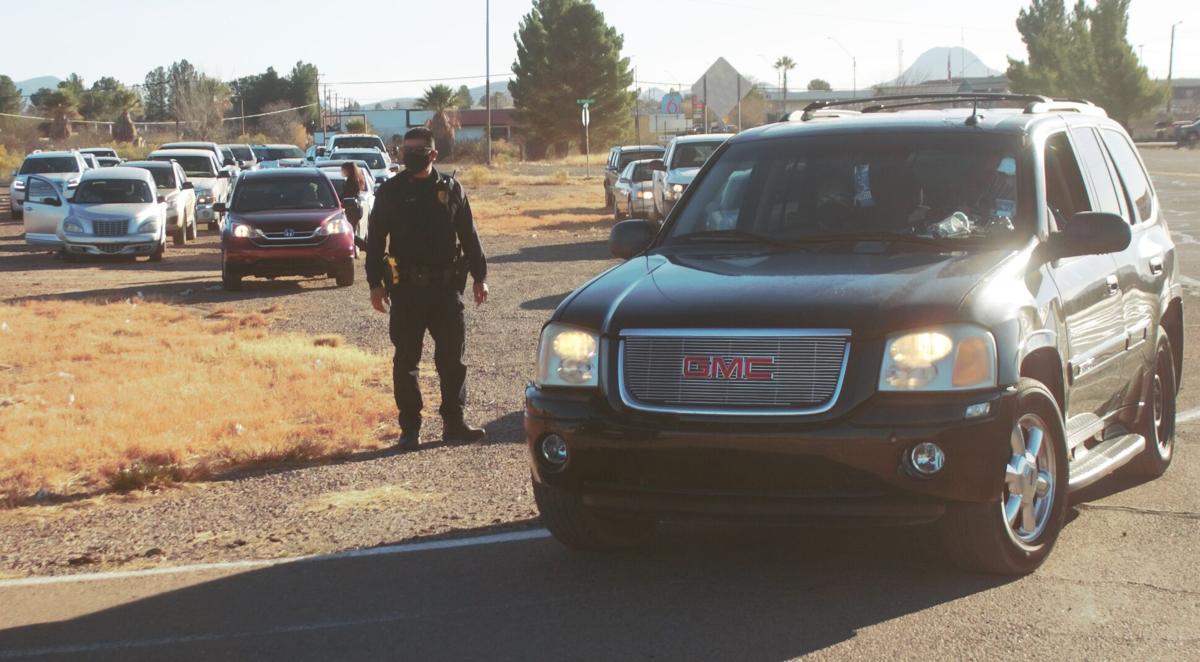 Officers with the Douglas Police Department had their hands full Saturday with traffic control as people from as far as Portal and Huachuca City came to Douglas to get the Moderna COVID-19 vaccine. 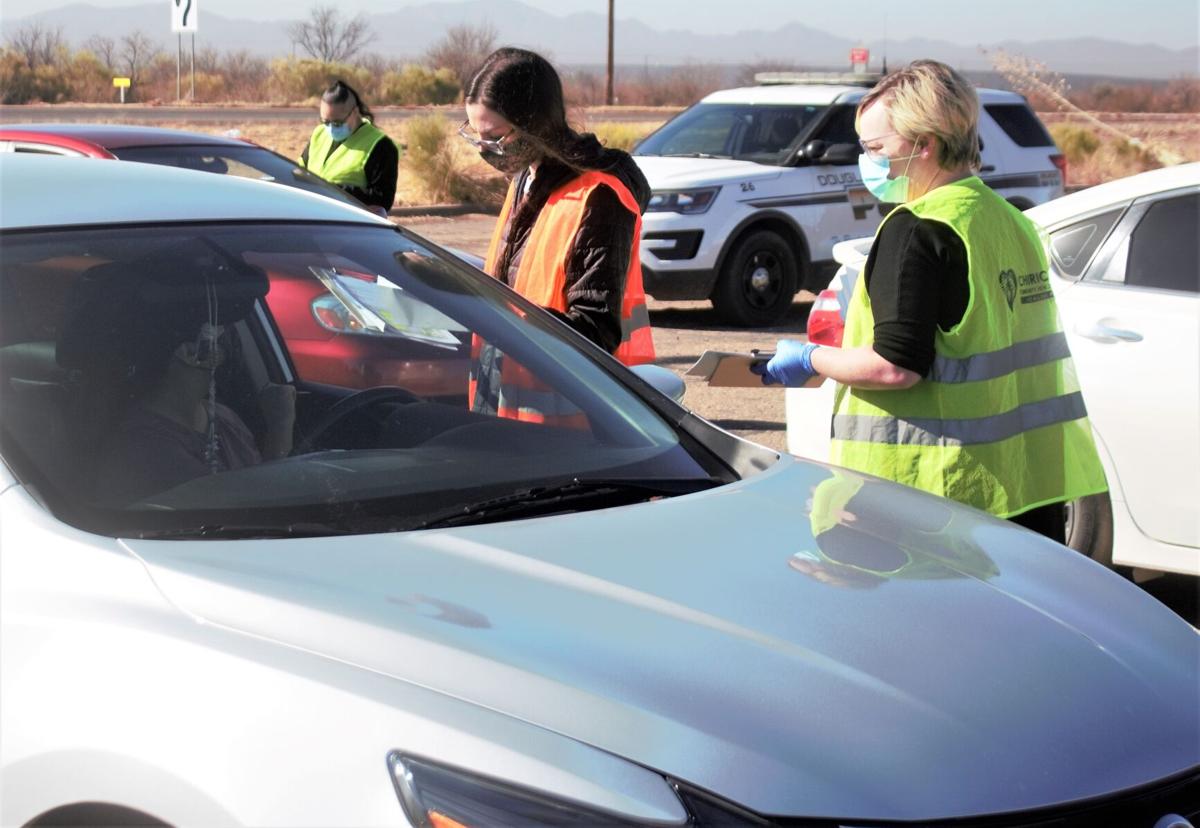 Emily Harris and Emily Vickers with Chiricahua Community Health Center Inc. check in one of the vehicles Saturday at the mass vaccination clinic in Douglas.

Local professional journalism is not free. In the effort to inform during COVID-19 we're providing this story for your benefit. Please join us, subscribe now..
1 of 5

Joey Mitchell of Sierra Vista takes a picture as her aunt, 86-year-old Elia Harris, is administered the Moderna COVID-19 vaccination Saturday in Douglas.

S Martha Montevallo, 98, of Huachuca City, is all smiles after getting her Moderna COVID-19 shot Saturday.

Henry Yeoman of Portal, a retired U.S. Navy veteran, said this shot was "nothing" when compared to the rounds of inoculations he received prior to leaving for Korea. Giving Yeoman the injection is Lizeth Hernandez of CCHCI.

Officers with the Douglas Police Department had their hands full Saturday with traffic control as people from as far as Portal and Huachuca City came to Douglas to get the Moderna COVID-19 vaccine.

Emily Harris and Emily Vickers with Chiricahua Community Health Center Inc. check in one of the vehicles Saturday at the mass vaccination clinic in Douglas.

DOUGLAS — People from all over southern Cochise County converged on Douglas Saturday to take part in the first round of Phase 1B Moderna COVID-19 vaccinations.

Cars began lining up at the old Kmart an hour before the gates opened. The Douglas Police Department was on hand to assist with traffic control, which later was a necessity as cars, some at times three wide, stretched several hundred feet.

The inoculations were being administered by the staff of Chiricahua Community Health Centers Inc. The Douglas Fire Department was in attendance in case anybody had a reaction to the vaccine.

Emily Vickers, public information officer for CCHCI, said this was the first clinic for Phase 1B to be held in Cochise County and people from as far as Portal and Huachuca City signed up to get the vaccine.

“We’re extremely happy we are able to do this,” she said. “It’s exciting, it’s a lot, but we’ll see how it goes today and go from there.”

Phase 1A, which was for all the frontline healthcare workers, emergency medical workers, and long-term care facility residents and staff was administered before Christmas.

“After we completed vaccinations with our own frontline staff the week of Christmas, we started vaccinating other healthcare workers in Cochise County,” Vickers said. “Phase 1B includes anyone 75 years of age and older, law enforcement, fire, corrections, etc., teachers and childcare workers, critical industry workers (utilities, gas/power, food supply), and any remaining healthcare workers from Phase 1A.”

Additional vaccination clinics will be held in the coming weeks at various sites around Cochise County. Vickers said the dates, times and locations have not been announced but she expects some kind of announcement this week.

“This is our trial run to see how we do,” Vickers said. “We haven’t done a clinic of this magnitude before. In our previous clinics there was really nothing to process other than to make sure the name, address and birth date matched our information. Here we are dealing with insurance so this process is taking a bit longer.”

Those who received the vaccine on Saturday were provided with a card that has their contact information, what type of vaccine they got and when they need to get the booster.

“It’s very important people understand this first shot does not give you immunity to COVID,” Vickers said. “It starts the system and begins the immune system buildup. Without the second shot you are not immune. So it’s really important people get that second shot. The second shot doesn’t have to be through us but it has to be the same vaccine, that’s why we give them the card.”

Lilia Lara, 85, of Douglas, was the first to be administered the vaccine Saturday.

Her son, Frank Lara, said the possible consequences of COVID-19 prompted him to get his mom signed up for the clinic once the event was announced.

Frank works in the healthcare field at the Arizona Department of Corrections in Douglas and has seen the effects it has on some of those who become ill.

“We want to do our part to help keep her safe and healthy and hopefully not catch COVID-19,” he said. “I’m more concerned about the COVID mortality rate than I am about the possible side effects and the issues of possibly contracting COVID afterwards.”

Lara said for him, the entire process of getting in line and getting vaccinated was pretty smooth and effortless. He was quick to praise the CCHCI staff for doing this.

Some people showed up who hadn’t pre-registered, which created somewhat of a backlog in those waiting to get the shot.

S Martha Montevallo of Huachuca City, who will turn 99 in March, came down with her daughter, Joey Mitchell, from Sierra Vista, who also brought her 86-year-old aunt Elia Harris, also of Sierra Vista, to get vaccinated.

“When we found out about this I made arrangements to pick up my mom and my aunt and brought them down,” Mitchell said. “Once we’re done here, we’re heading back home.”

Montevallo said she wanted to get the shot because everybody else was getting it and she thought it would be a good idea.

“I’m not concerned about the possible side effects,” she said.

Harris added there was no doubt in her mind she was going to get the shot once it became available. The only obstacle was how would she get to Douglas, and that’s when Mitchell stepped in.

“I could not wait to get my mother in,” Mitchell said. “There is no way I could take her to a hospital, leave her and go away. I did not want to have her die in a hospital. She can die at home if she wants but not like that.”

Henry Yeoman, 85, of Portal, a retired U.S. Navy veteran who fought in the Korean War, joked this inoculation was “nothing” compared to the series of shots he received prior to leaving for Korea.

“Oh my God some of those shots hurt,” he said. “It went on for about two weeks getting shot in one arm or the other. On top of that I caught pneumonia in boot camp and spent a month in the hospital. When this vaccine became available I came down with my wife, Joanne, to get this.”

Yeoman said getting the shot provides peace of mind for him and his wife of 50 years.

“We’re doing what we can to stay safe and this is just another step in that direction,” he said.

Look for more on this event including updated inoculation numbers well as additional information on upcoming clinics in Wednesday’s county edition of the Herald Review.