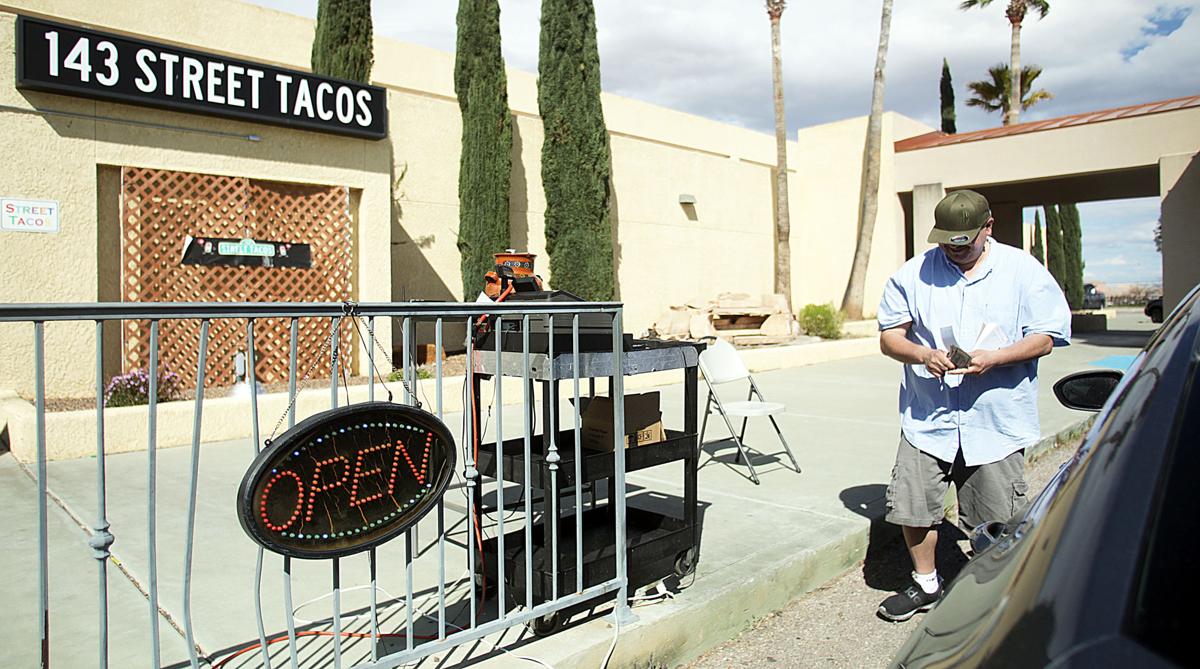 143 Street Tacos co-owner Marcelo Carrillo tends to a customer Tuesday in Sierra Vista. The eatery has voluntarily gone to drive-thru service due to the recent COVID-19 issues. 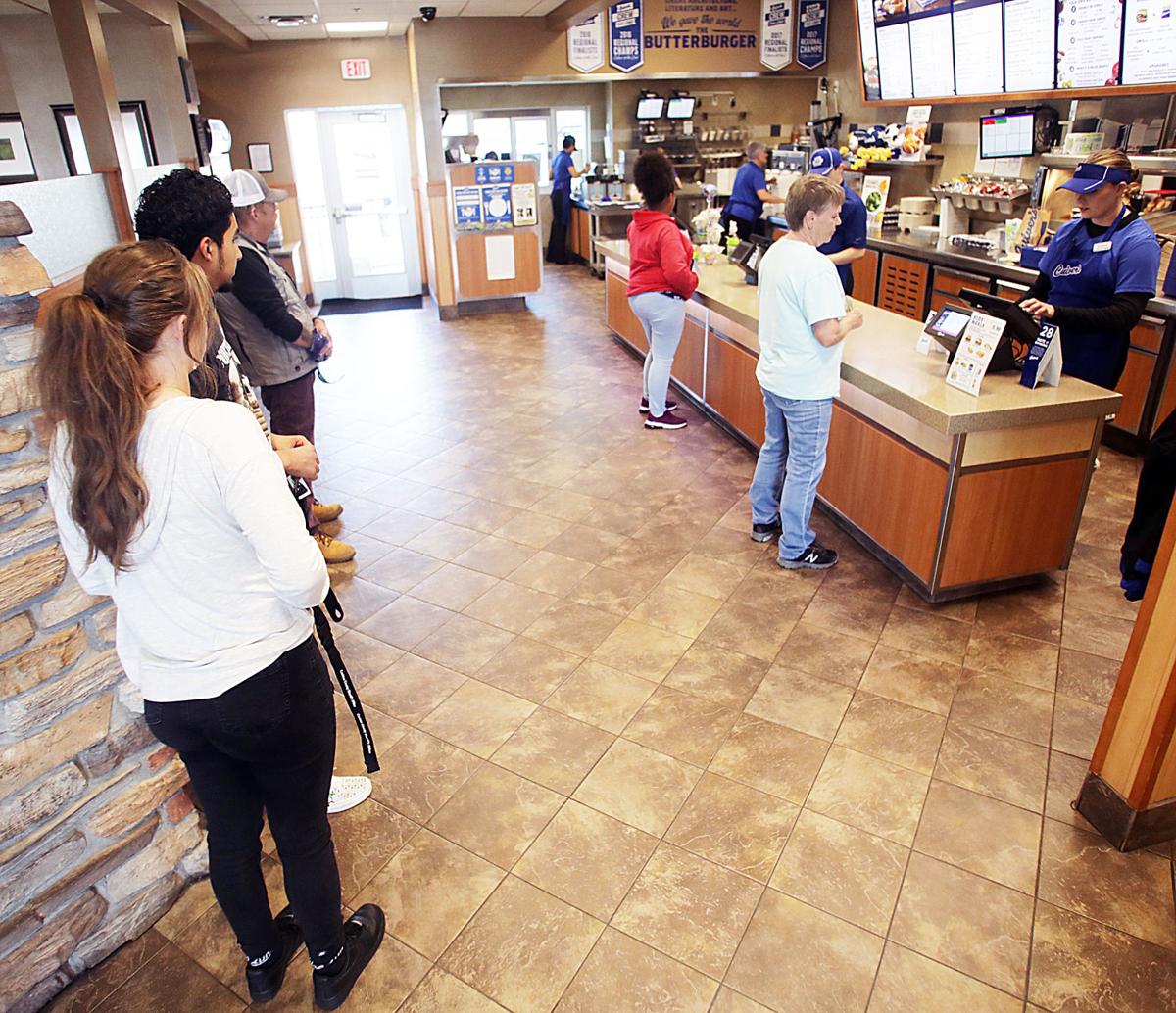 Culver’s will still serve in their restaurant today and go to drive-thru only beginning on Thursday.

We have lifted the paywall on this story. To support essential reporting, please consider becoming a subscriber.
1 of 2

143 Street Tacos co-owner Marcelo Carrillo tends to a customer Tuesday in Sierra Vista. The eatery has voluntarily gone to drive-thru service due to the recent COVID-19 issues.

Culver’s will still serve in their restaurant today and go to drive-thru only beginning on Thursday.

SIERRA VISTA — As restaurants across the state are closing their doors due to the COVID-19 pandemic, local eateries and establishments prepare for a smaller number of dine-in customers.

According to the new Centers for Disease Control and Prevention guidelines, gatherings should not exceed 10 people. The new rules caused local business owner Morcelo Carrillo to restructure how he runs his restaurant, 143 Street Tacos. Carrillo said he is operating with a drive thru, where he takes orders outside of the building and employees bring food to the cars. Customers can also call in their orders and receive them with curbside pickup.

“We saw the guidelines changed to 10 people, so we’re just following the rules,” Carrillo said.

While Carrillo decided to shut his dining room, other local business decided to continue as normal since they haven’t been told otherwise. The doors remain open at local eating haunts like the Landmark Cafe, Vinny’s New York Pizza and Papa’s ‘50s Diner.

Pam Anderson, owner of the Landmark Cafe in Sierra Vista’s West End, said business was brisk on Tuesday and she has no plans to close, for now.

“It will depend on what the health department tells us,” Anderson said. “It doesn’t say we have to close yet. We’ve been packed today.”

Anderson said she speaks with the health department daily regarding the latest developments on the coronavirus. She said her customers are split down the middle when it comes to worrying about the pandemic.

“Some people are just saying it’s like the flu,” Anderson said. “Others say they’re worried.”

Destiny Scudella, whose grandfather owns Papa’s ‘50’s Diner on AZ-92, said there are no plans to close their place, either. But the general manager at Vinny’s said staff would assess later this week whether the pizzeria should transition to delivery and take-out service.

“We’re not doing anything yet,” said general manager Meagan Chaney. “But we will also wait to see what the health department says.”

Like local businesses, chain restaurants are having constant conversations about how to adapt in uncharted territory. Applebee’s is practicing “social distancing” by removing roughly half of their bar stools and staggering seating so patrons are not sitting directly next to one another. They have not changed their hours and don’t know if they will close their dining room yet. The change in seating has forced them to trim their staff since they have fewer people dining in.

While some nationally known restaurants and franchise eateries are still in limbo and waiting for instructions, others are implementing new rules and practices for their businesses. Sandy Adams, owner of the popular Culver’s on State Highway 92, said the eatery’s dining room would be closed starting Thursday.

“We’re not letting anyone in at all,” Adams said Tuesday. “It is now mandatory for all Culver’s across the board to do that.”

Adams said the restaurant will definitely keep serving up its burgers, milkshakes and fries via their drive-thru window, seven days a week from 10:30 a.m. to 10 p.m.

Buffalo Wild Wings, also on AZ-92, said they closed their dining room and bar on Tuesday, but would be open for curbside service and take-out.

“We have had to reduce our staff, but we have enough [people] to do curbside and take-out,” said general manager Andre Thomas.

Thomas also said the decision to close the bar and restaurant was a corporate mandate that affects all the restaurants nationwide.

Local businesses that are keeping their doors open are using the time to also inform their patrons and employees of good hygiene practices. Joy Aguilar, co-owner of J’s Kitchen and JV’s Boba, said she and her employees are using hand sanitizer after each payment and cleaning door handles and tables more often throughout the day.

“We’re doing OK,” Aguilar said. “Most of our customers are using the drive-thru (window). Depending on how things go, we may go (strictly) to the drive thru.”

Keeping an establishment clean and sanitized isn’t anything new for Russ Ward, owner of the Horned Toad.

Ward is keeping his doors open while keeping an eye on changes made by the CDC. He said they are going to continue to have their performers and drinks available, but have halted promotion of events to not urge people to consider going out if they don’t want to.

Ward noticed smaller crowds but still sees patrons who want a drink after a long day or week.

“We run our business with a mindset of being responsible,” he said. “We just have to be responsible and pivot with the economy.”

How some local business are operating

Panda Express: take out and drive-thru

Chipotle: Delivery and take out

Arby's: Take out and drive-thru

Native Grill: Still open, will do their own delivery if forced to close. Taking every measure to keep all areas sanitized including setting timers in kitchen every 15 minutes to remind employees to wash hands.

Texas Roadhouse: Beginning Thursday will open every day at 11 a.m. and close at 8 p.m. Will do their own delivery if they have to close doors. This will include curbside pickup/takeout.

Jimmy Johns: Take out and delivery

Tandem: curbside pick up for take out. Seating 40 people maximum

Taco Bell: Take out or delivery

*Sierra Vista Chamber of Commerce contributed to this list