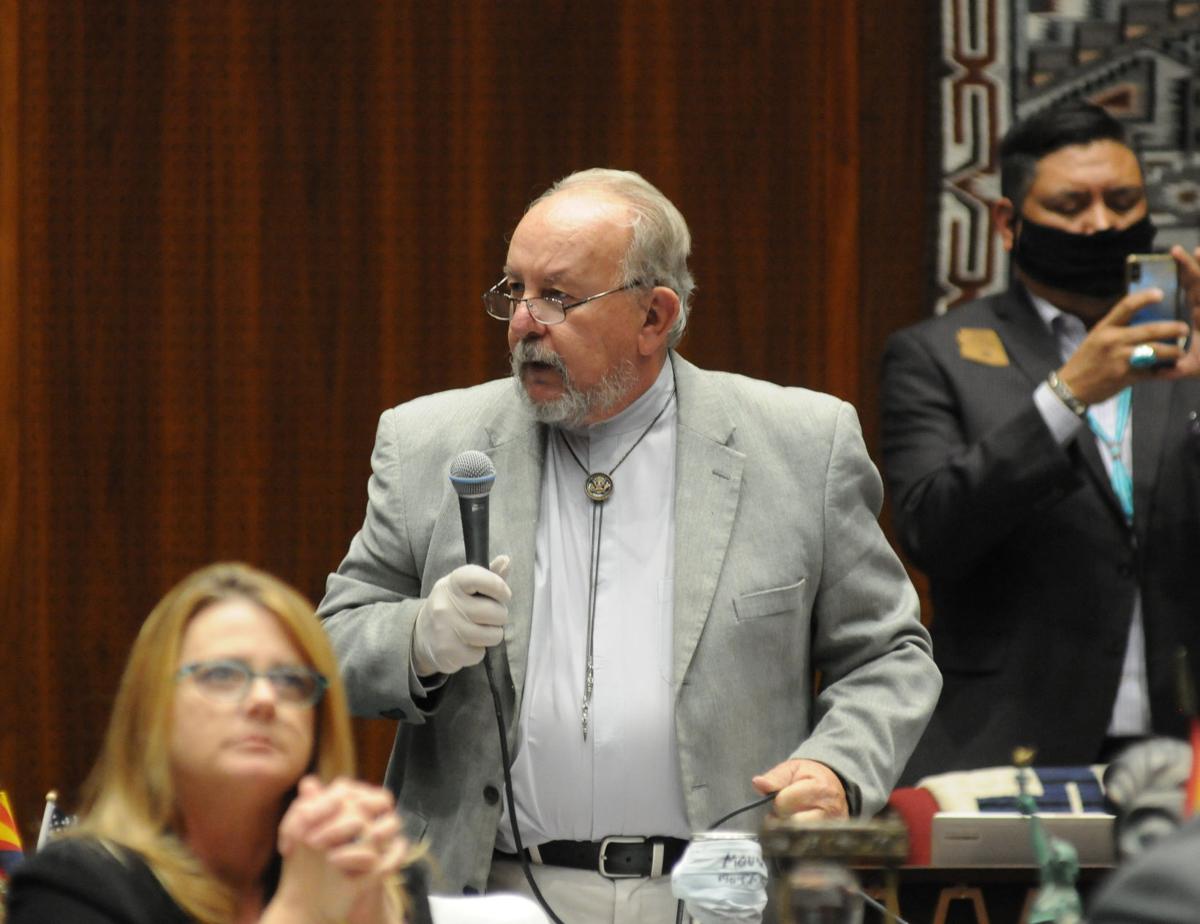 Rep. John Fillmore explains Tuesday why he believes the House should remain in regular session and not adjourn to deal only with virus-related issues. 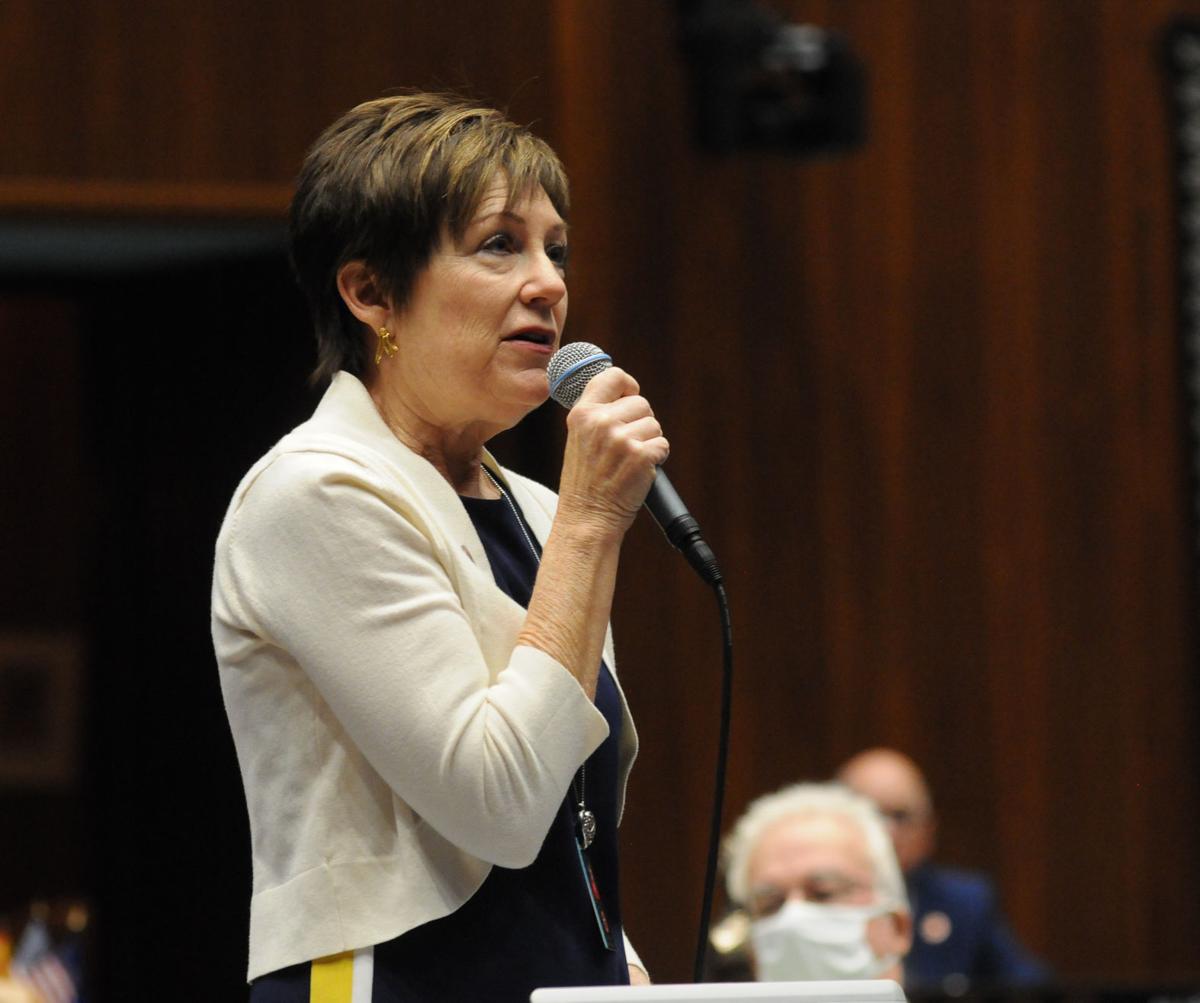 Rep. Nancy Barto tells colleagues on Tuesday that COVID-19 is going to be around for awhile but people cannot live in fear. 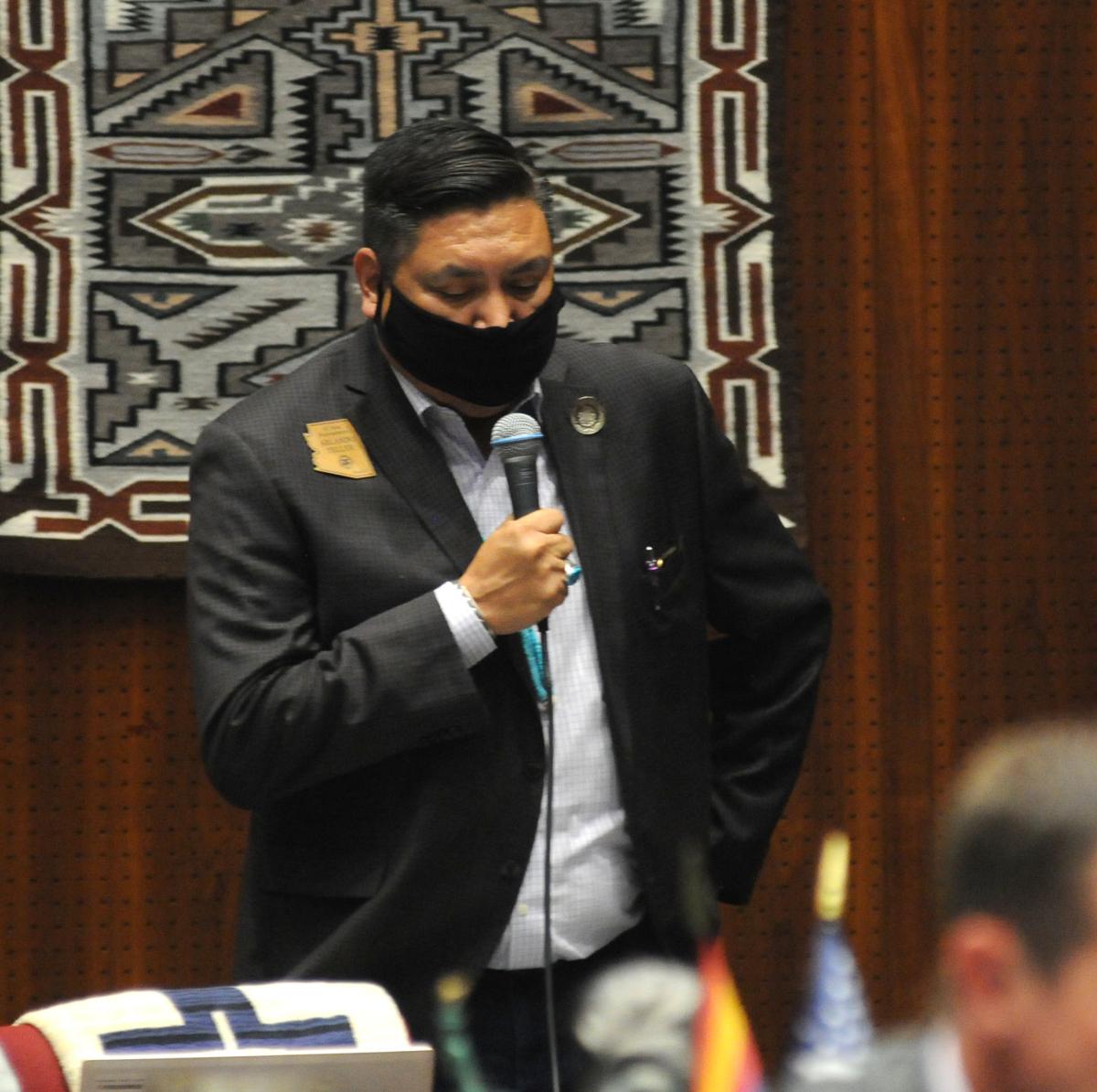 Rep. Arlando Teller says the deaths on the Navajo Reservation from COVID-19 show the need for lawmakers to focus on the virus and its effects rather than regular legislative business

Rep. John Fillmore explains Tuesday why he believes the House should remain in regular session and not adjourn to deal only with virus-related issues.

Rep. Nancy Barto tells colleagues on Tuesday that COVID-19 is going to be around for awhile but people cannot live in fear.

Rep. Arlando Teller says the deaths on the Navajo Reservation from COVID-19 show the need for lawmakers to focus on the virus and its effects rather than regular legislative business

PHOENIX — House Republicans thwarted a bid by Democrats Tuesday to shut down regular legislative business and focus only on issues related to COVID-19.

The party-line vote to keep the session open came as the GOP majority said it’s time to stop worrying about the virus and get back to the regular business of the Legislature. And they followed through with votes on everything from regulation of travel insurance to when state health inspectors can drop in at medical marijuana dispensaries.

“Nobody is saying we’re all going to be safe going out,” said Rep. Nancy Barto, R-Phoenix. “We know this is a very contagious disease.”

In fact, she said, many if not most people will be exposed and many will get it.

“But we shouldn’t live in fear and have to get back to normal life,” Barto said.

Rep. John Fillmore, R-Apache Junction, had his own take on how there has been a vast overreaction to the pandemic.

“The experts were wrong in the United States and the state of Arizona,” he said.

“The surrounded my president and they surrounded the governor and they gave them bad information,” Fillmore continued. “Paranoia was fueled by the media.”

All that, he said, is part of “a blatant move to replace the freedoms that have been given to us.”

The extensive debate came as the Senate remains in recess, with members there having voted earlier this month to say they’ve finished their business for the session. But House Republicans have a laundry list of issues they want addressed.

That decision by the GOP to remain in session angered Rep. Arlando Teller, D-Chinle, who pointed out that the Navajo Nation has the highest per capita infection rate in the country.

“Over 150 of my family and my relatives are either six feet under or in the process for a casket to be processed so that we can pay our respects,” he said.

And Minority Leader Charlene Fernandez, D-Yuma, chided colleagues for voting on changes in state oversight of college savings programs. She said what her constituents need is food.

It’s not that Democrats want to go home.

Instead, they want a special session to focus only on virus-related issues, including increasing the maximum benefit under the state’s unemployment compensation law. It is capped at $240 a week, the second lowest figure in the nation.

Some of that has been masked by federal legislation providing an additional $600 a week. But those additional benefits are set to disappear this summer.

The divide between Republicans and Democrats over COVID-19 was pointed up by the fact that only a handful of Republicans were wearing masks; all the Democrats had their faces covered.

“We know that a person who is speaking without a mask is sending out vaporized virus in their breath, no less than six feet,” said Rep. Diego Rodriguez, D-Phoenix. “To pretend otherwise is irresponsible.”

The fight that erupted onto the House floor on Tuesday has been brewing for weeks, ever since the GOP majority refused to follow the lead of the Senate and shut down.

At the same time, though, there has been some finger pointing about what is taking so long to wrap up the session.

In a message to colleagues, House Majority Leader Warren Petersen, R-Gilbert, said the chamber could wrap up all the loose ends by Thursday — “or if the Dems are turds we come in Friday to wrap up.”

And Petersen set the stage for the talking points.

“We need to constantly push the narrative that the Ds are stalling and keeping AZ society from getting back to normal as needed,” he wrote.

That played out on the floor as House Speaker Rusty Bowers, R-Mesa, called the Democrats a “party of fear.” And he noted the hit the state’s economy has taken from the virus and the governor’s orders telling people to stay home and limiting what businesses could operate.

Most of those directives are now gone.

Bowers acknowledged that there are people who are not ready to resume their pre-COVID activities.

“Please, stay home,” he said. “Wait until you’re confident, then start coming out.”

But that, he said, cannot be the attitude for the entire state.

“For the majority of Arizonans, especially those with businesses, they need to get back to work,” Bowers said.

One unanswered question is whether the votes taken Tuesday — and those set for the rest of the week — will actually result in changes in the law.

Technically speaking, while the Senate voted to say it is finished, it has not gone home. Instead, Senate President Karen Fann put the chamber into an indefinite “recess” as the Arizona Constitution forbids one chamber from adjourning for the year without the consent of the other.

But Fann also noted that being in recess leaves the door open for dealing with a few more issues if needed. And one of those she personally favors is a bill set for House debate to make it harder for people who contract COVID-19 to sue businesses.