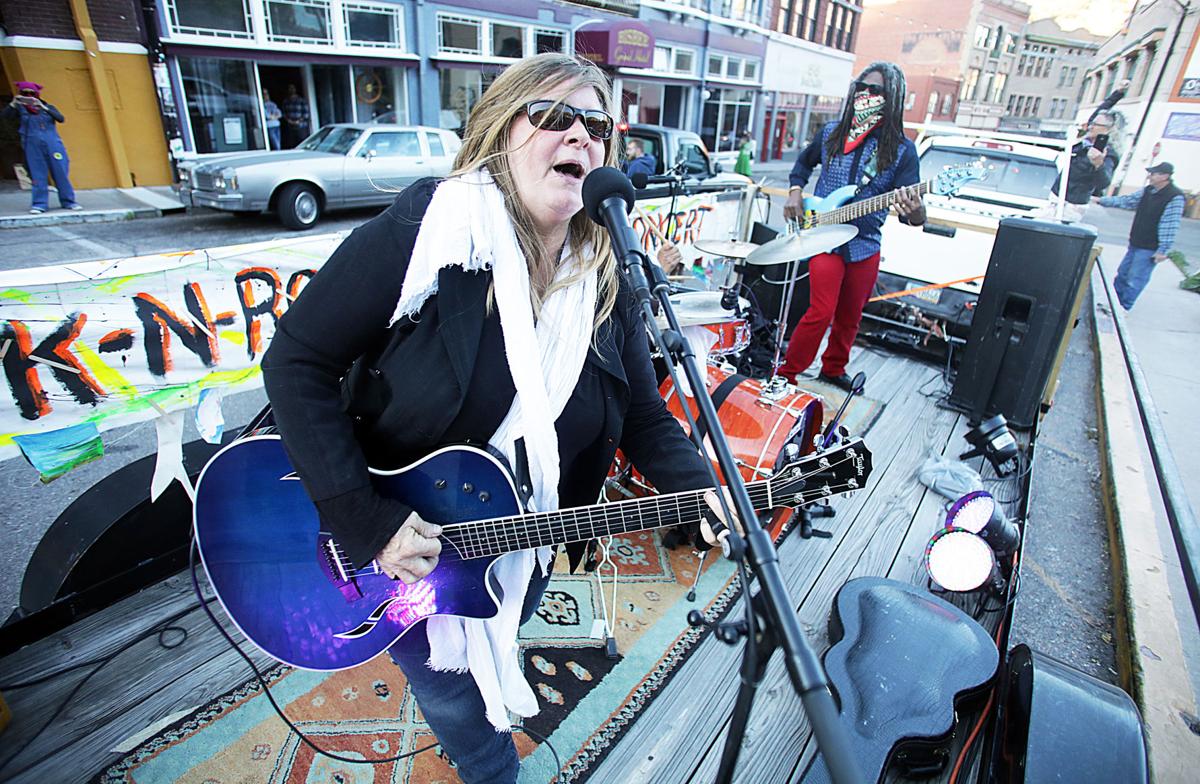 Melissa Reaves leads a trio of musicians during their Rock-N-Rolling Relief Concert through the streets of Old Bisbee last Saturday. 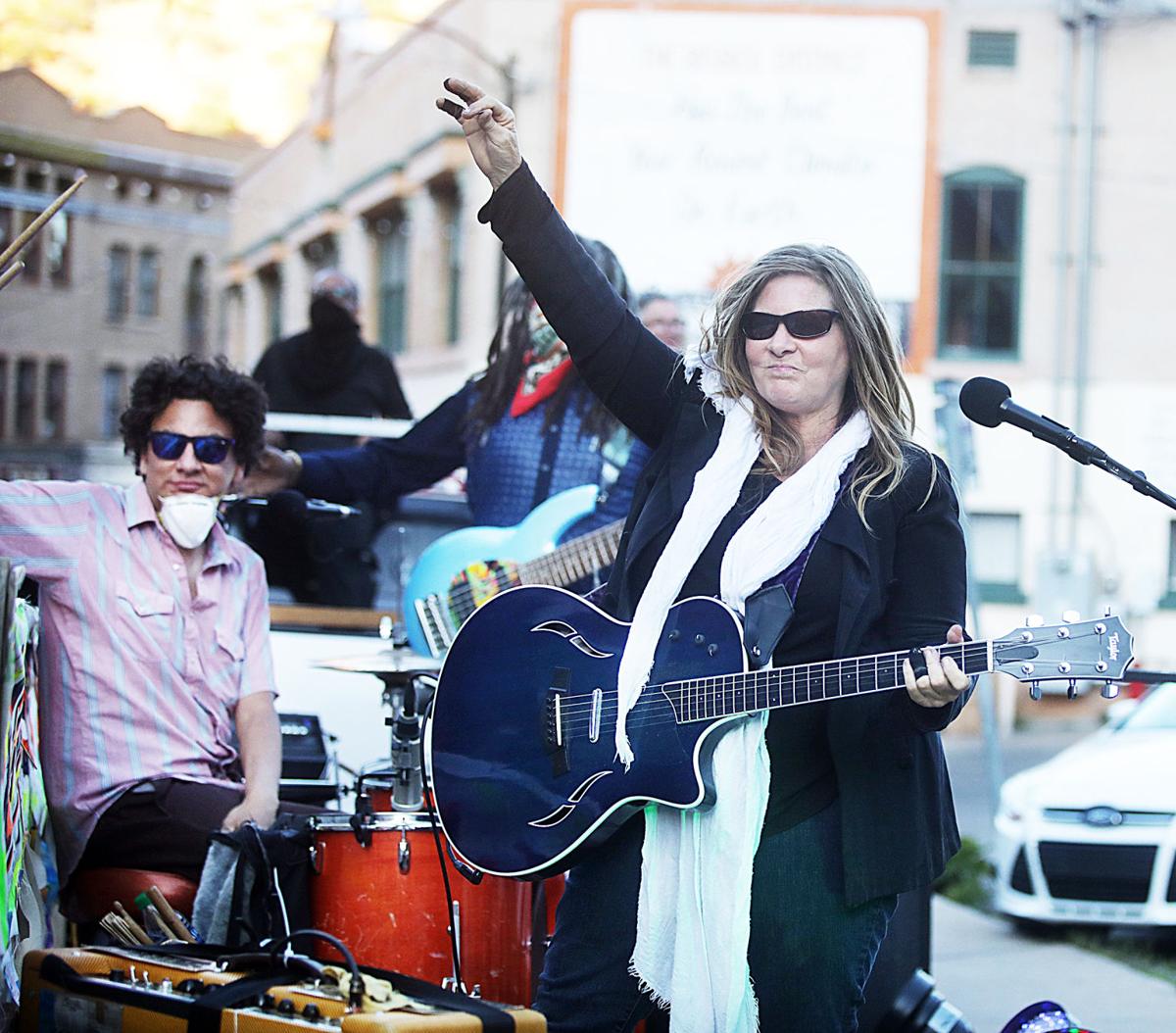 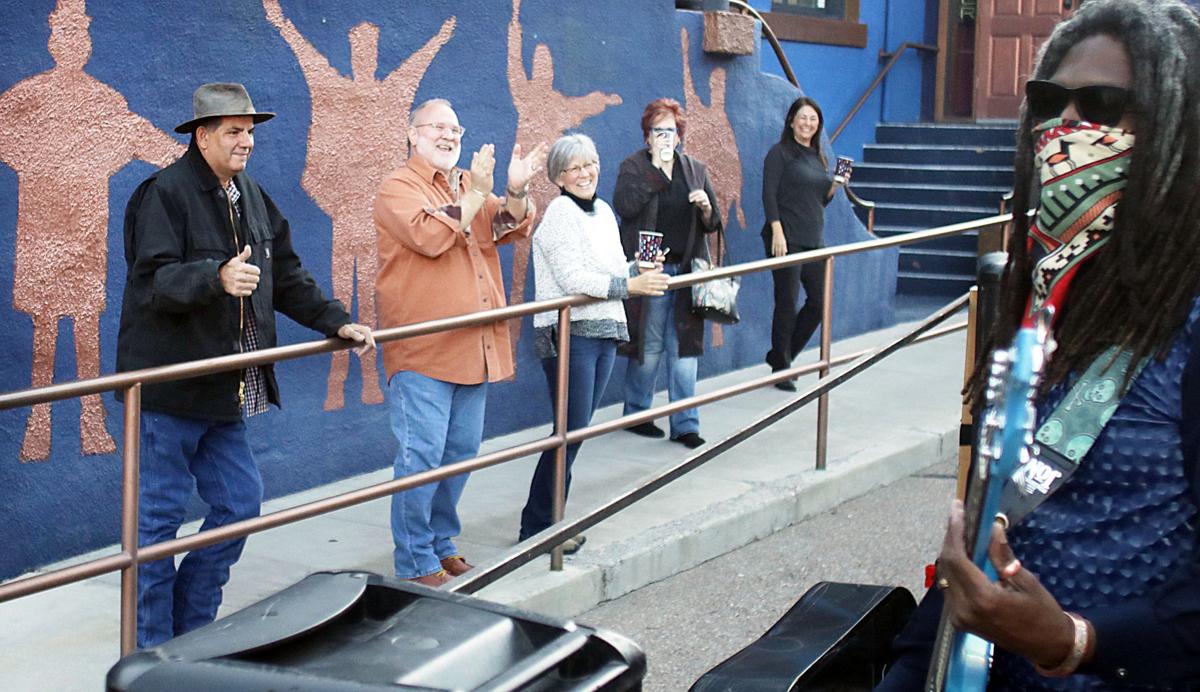 Pedestrians on the streets of Bisbee show their appreciation as a rolling trio of musicians entertain last week. 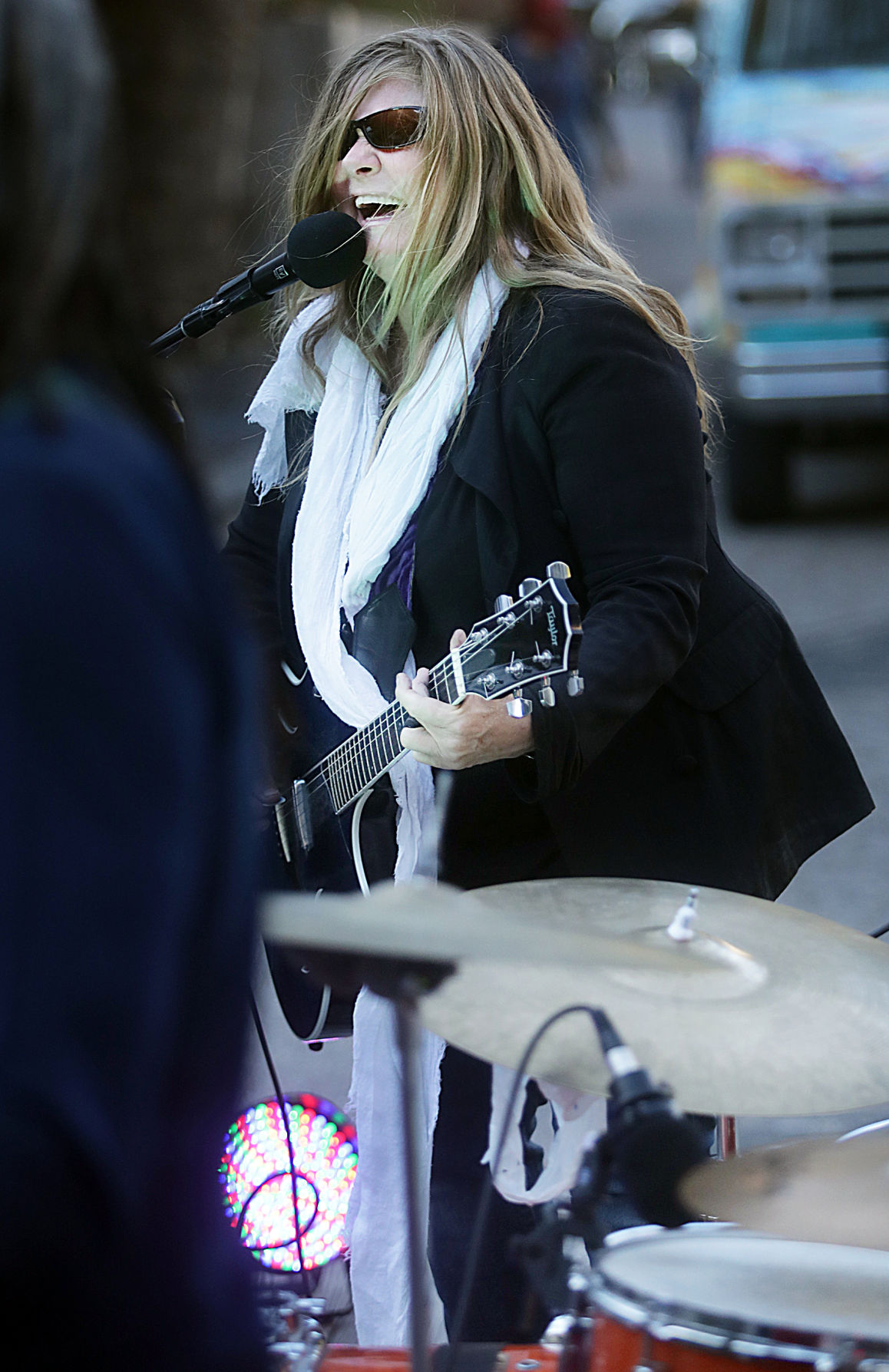 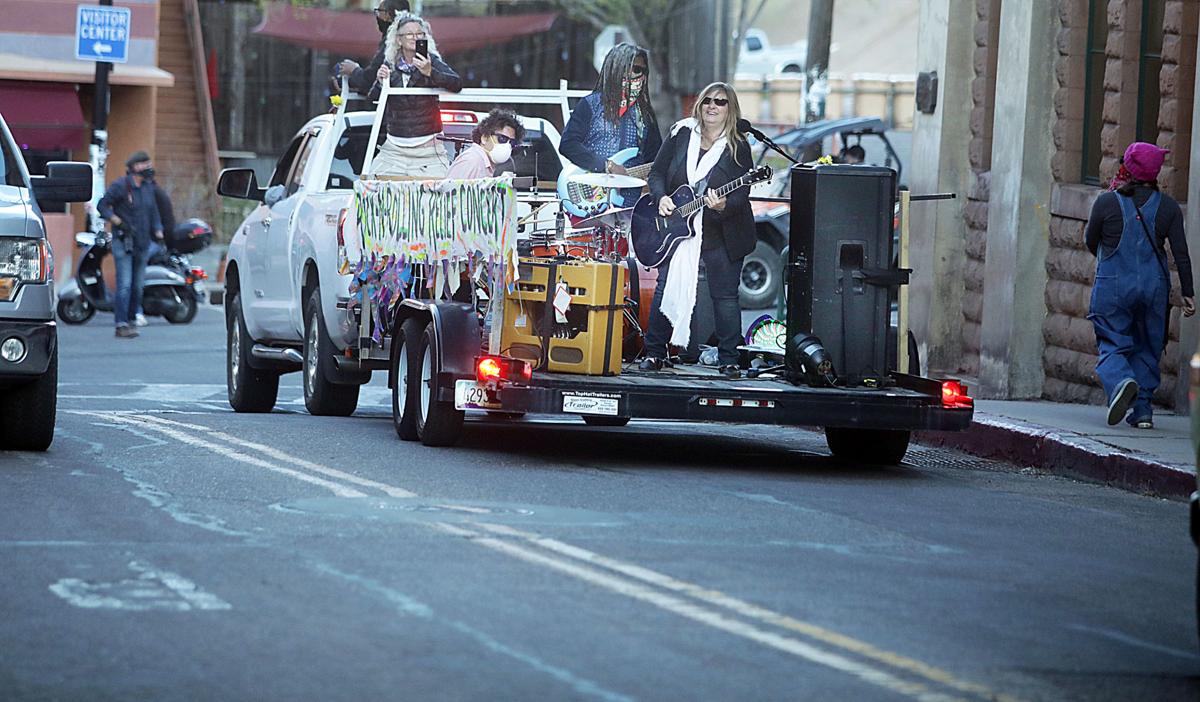 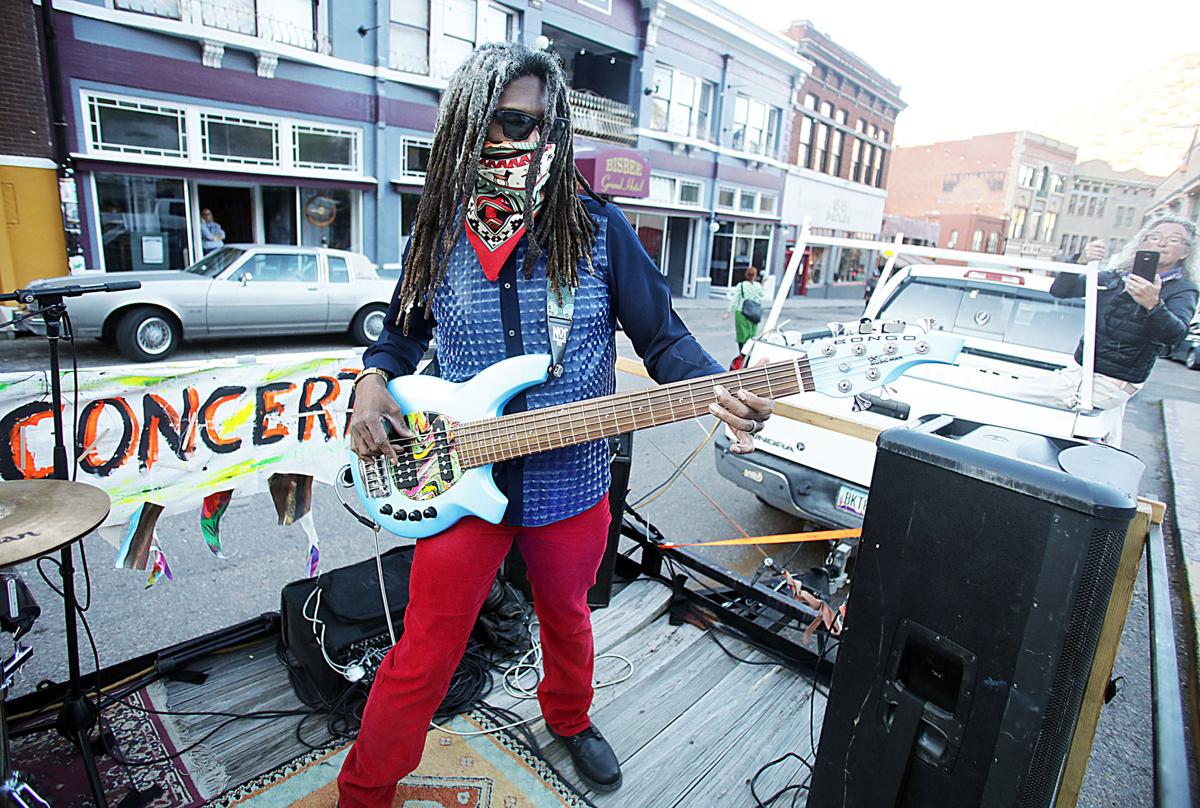 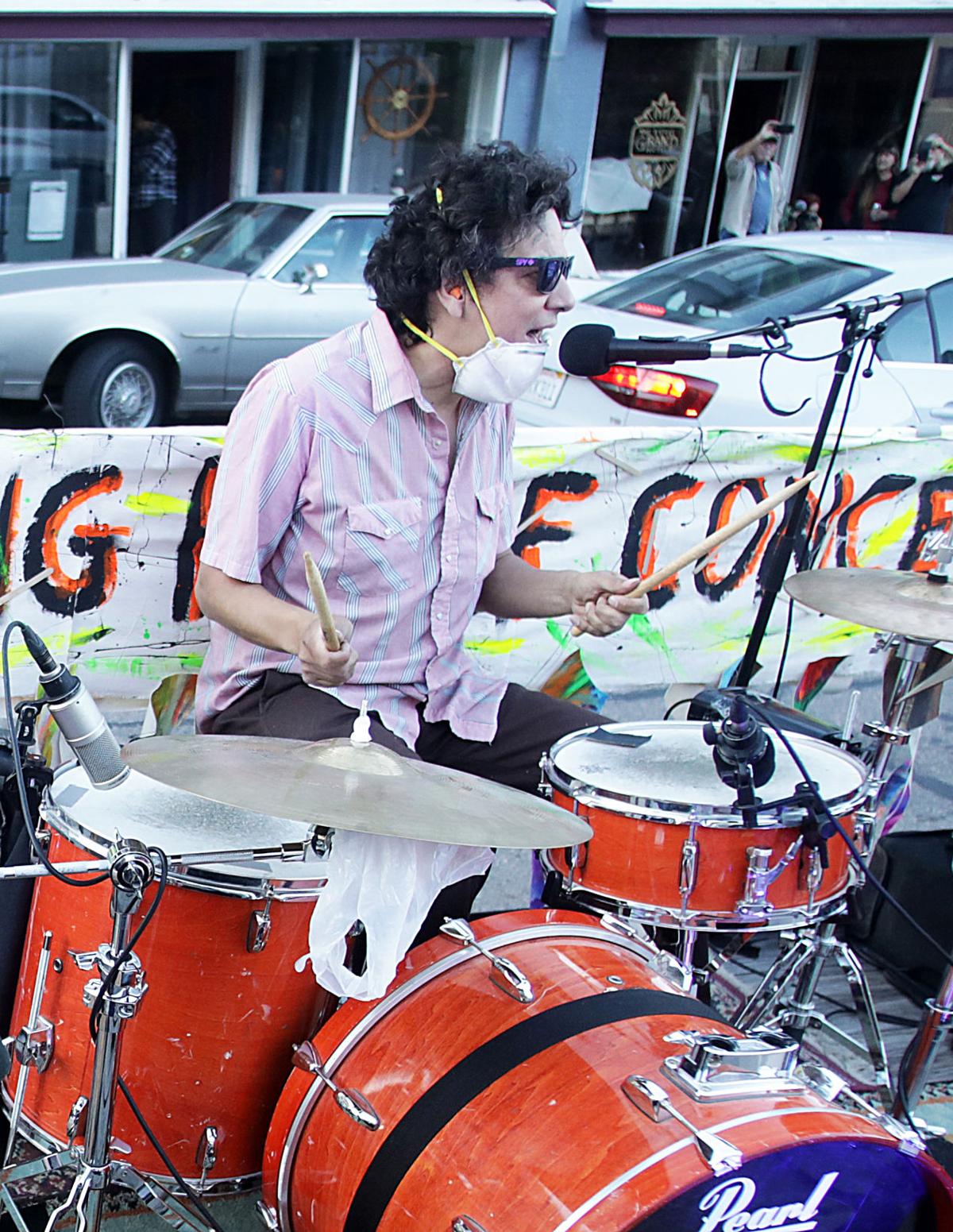 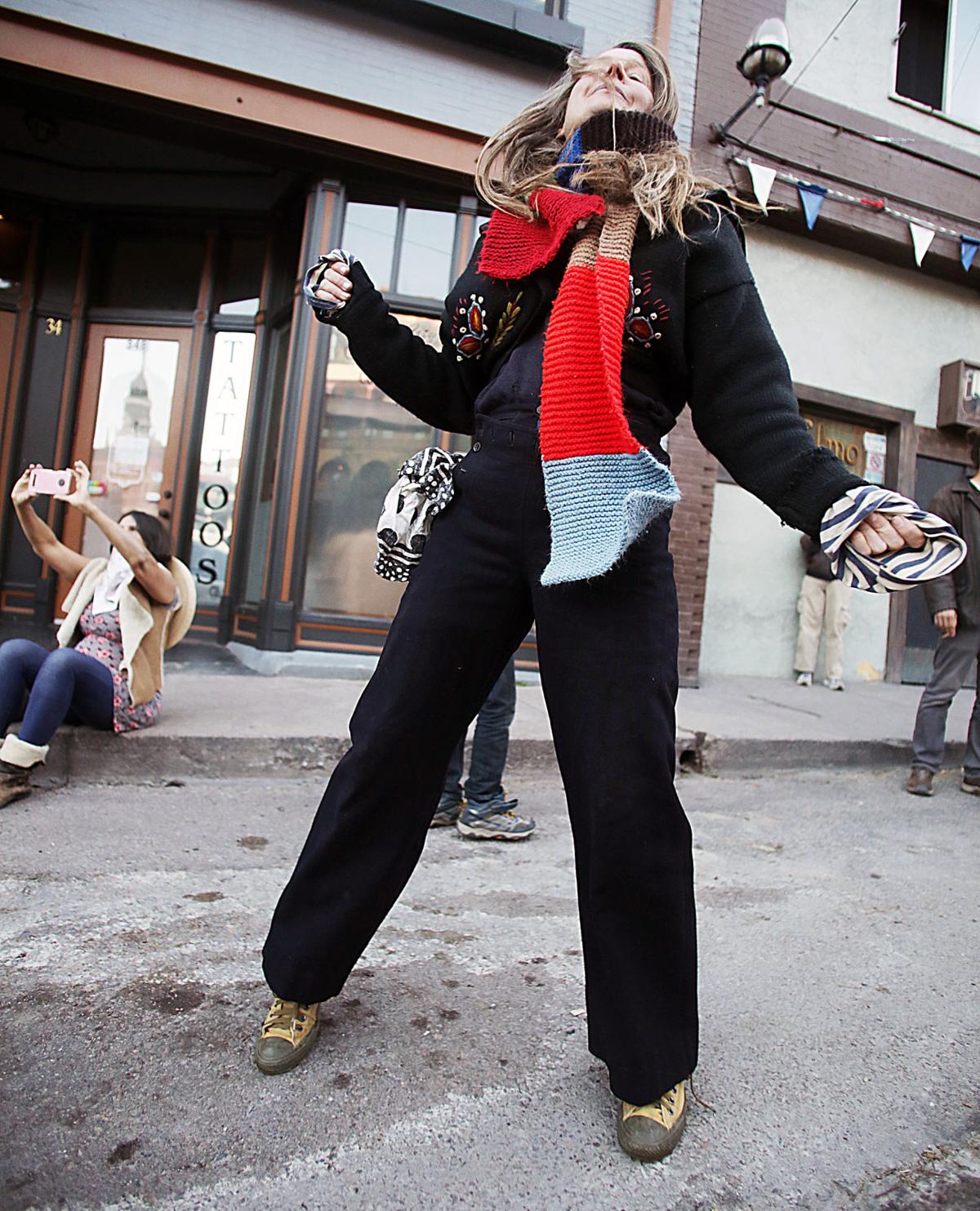 A music fan moves to the sounds in Brewery Gulch during Saturday’s rolling concert. 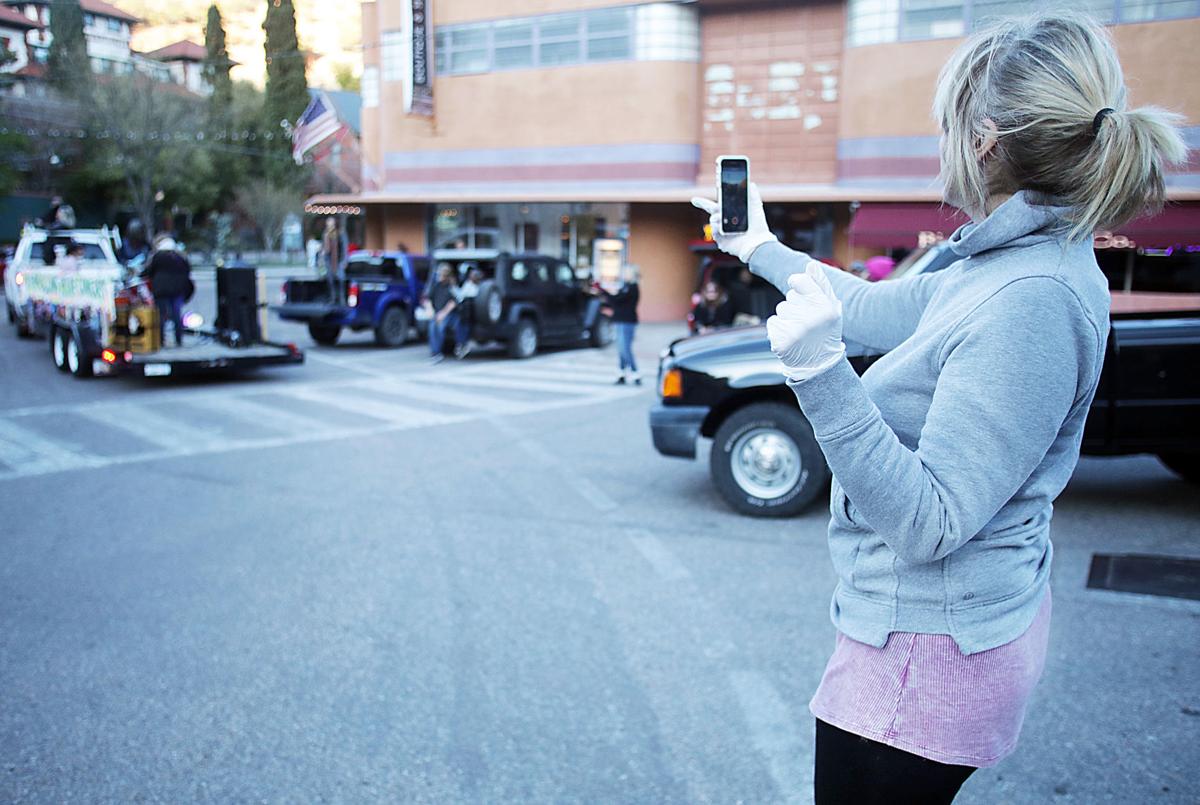 A pedestrian captures the moment as the Rock-N-Rolling Relief Concert makes its way down Main Street. 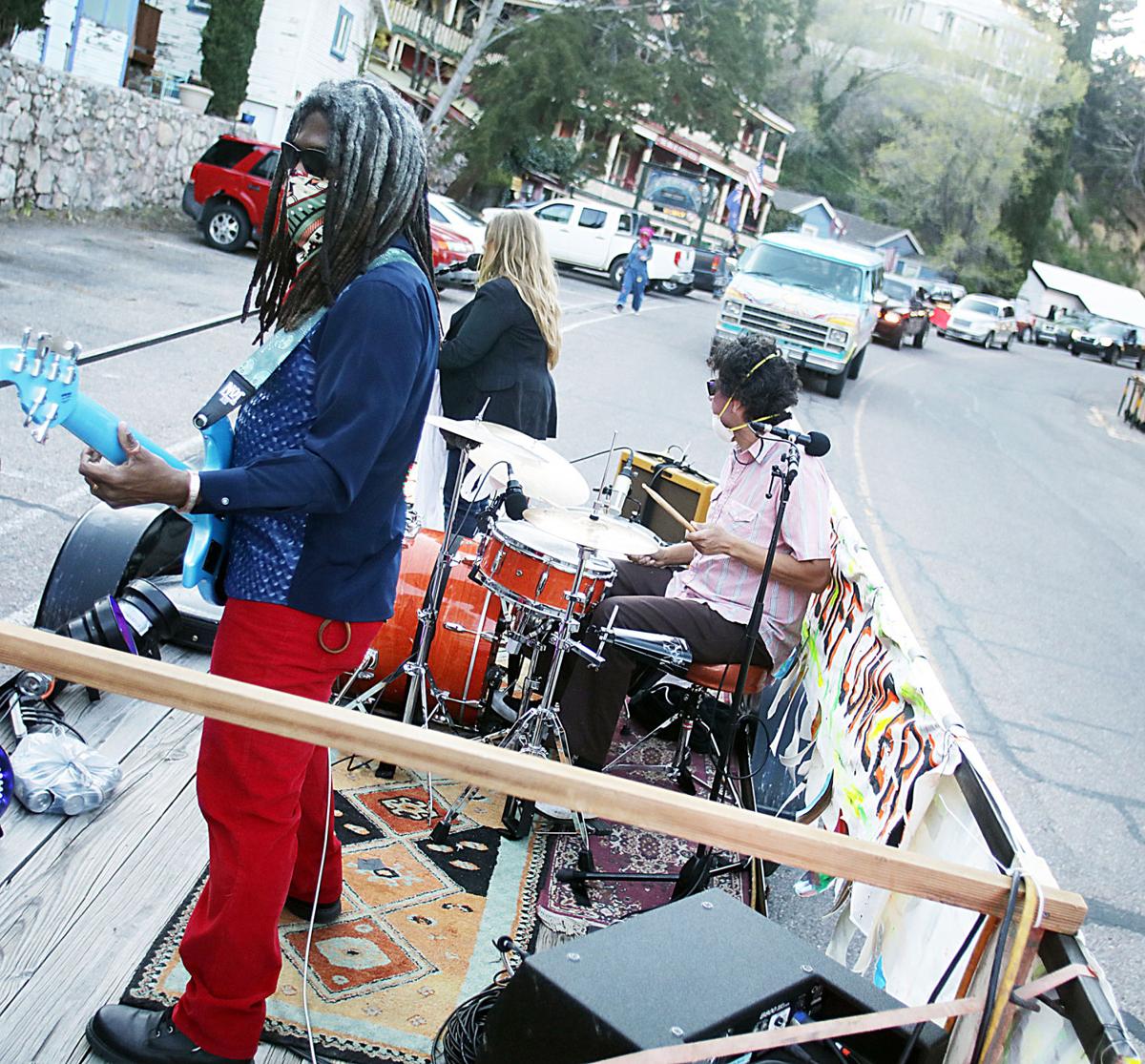 The Rock-N-Rolling Relief Concert rolls down Main Street as they perform in Bisbee. 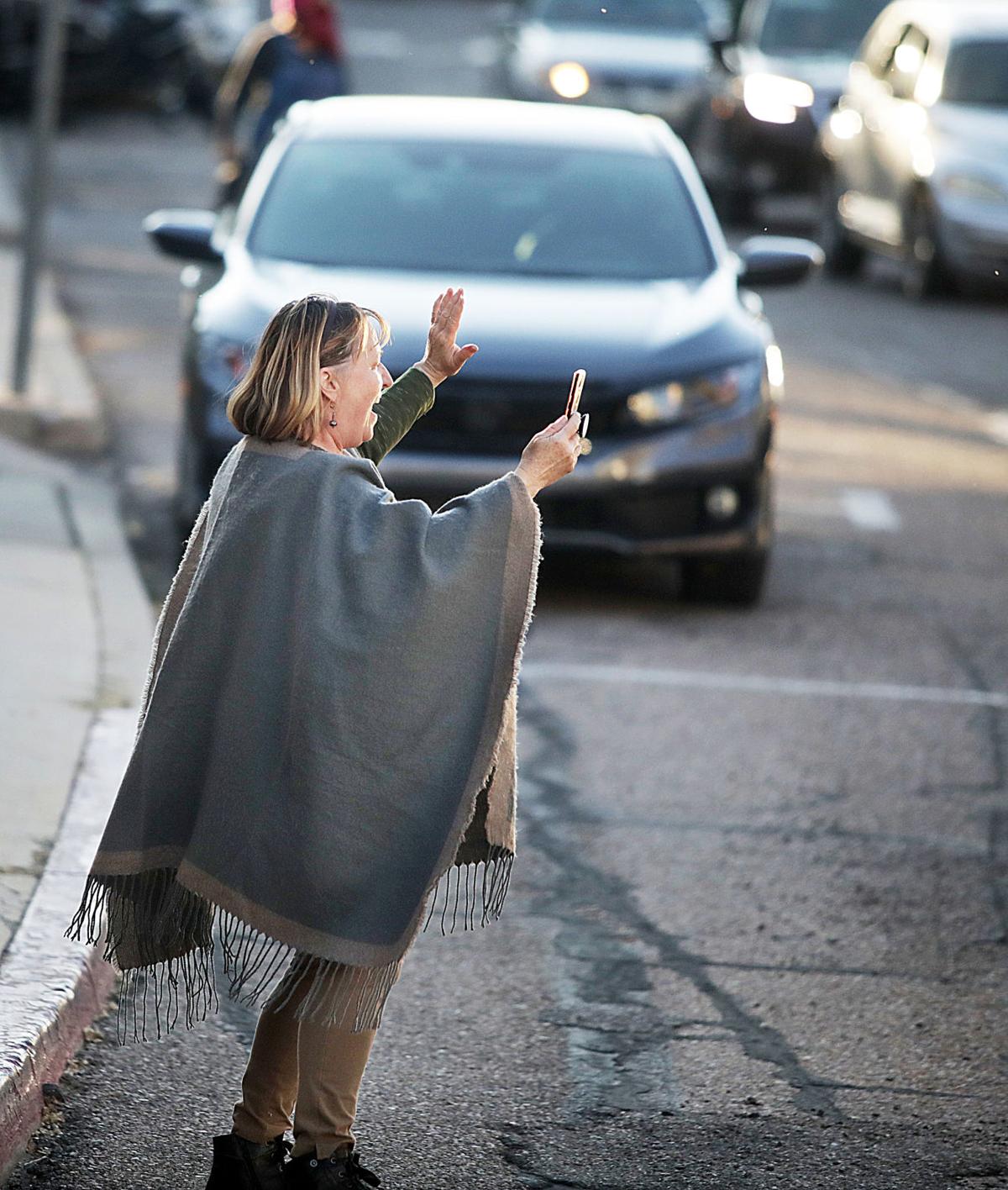 A Rock-N-Rolling Relief Concert fan creates a keepsake of Saturday’s performance in Bisbee. 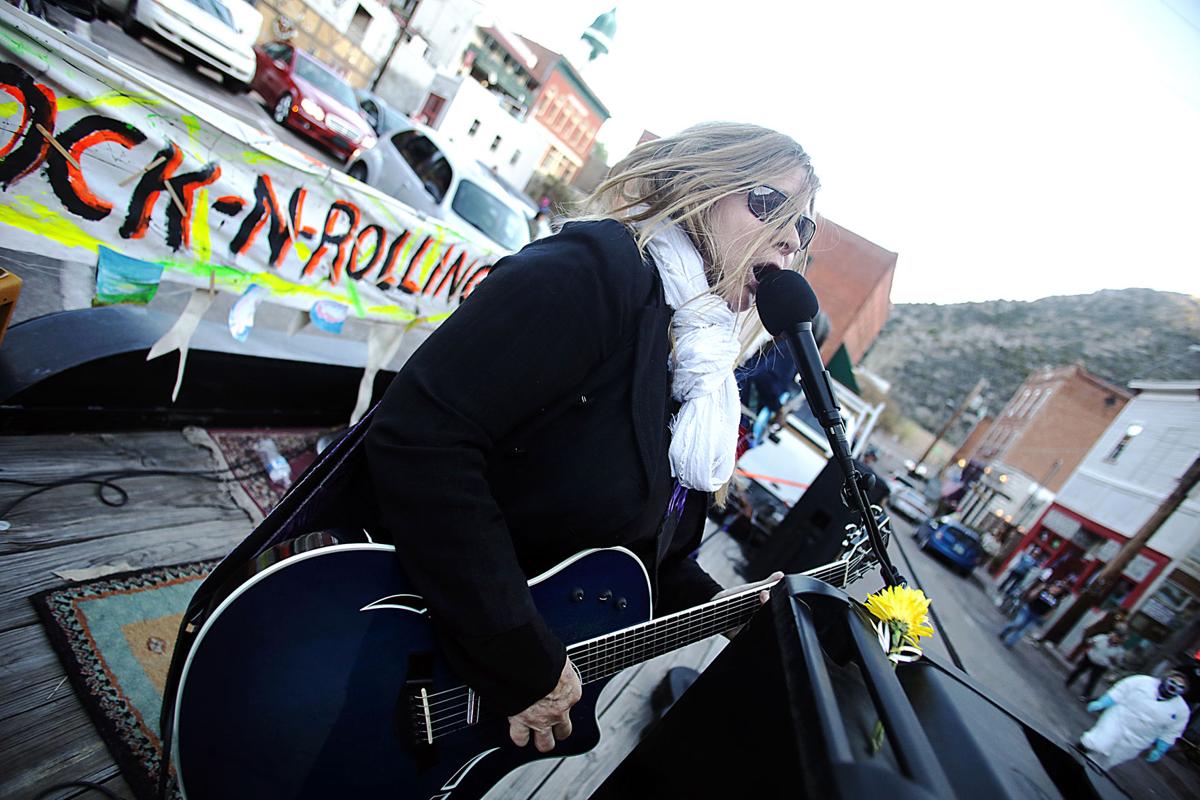 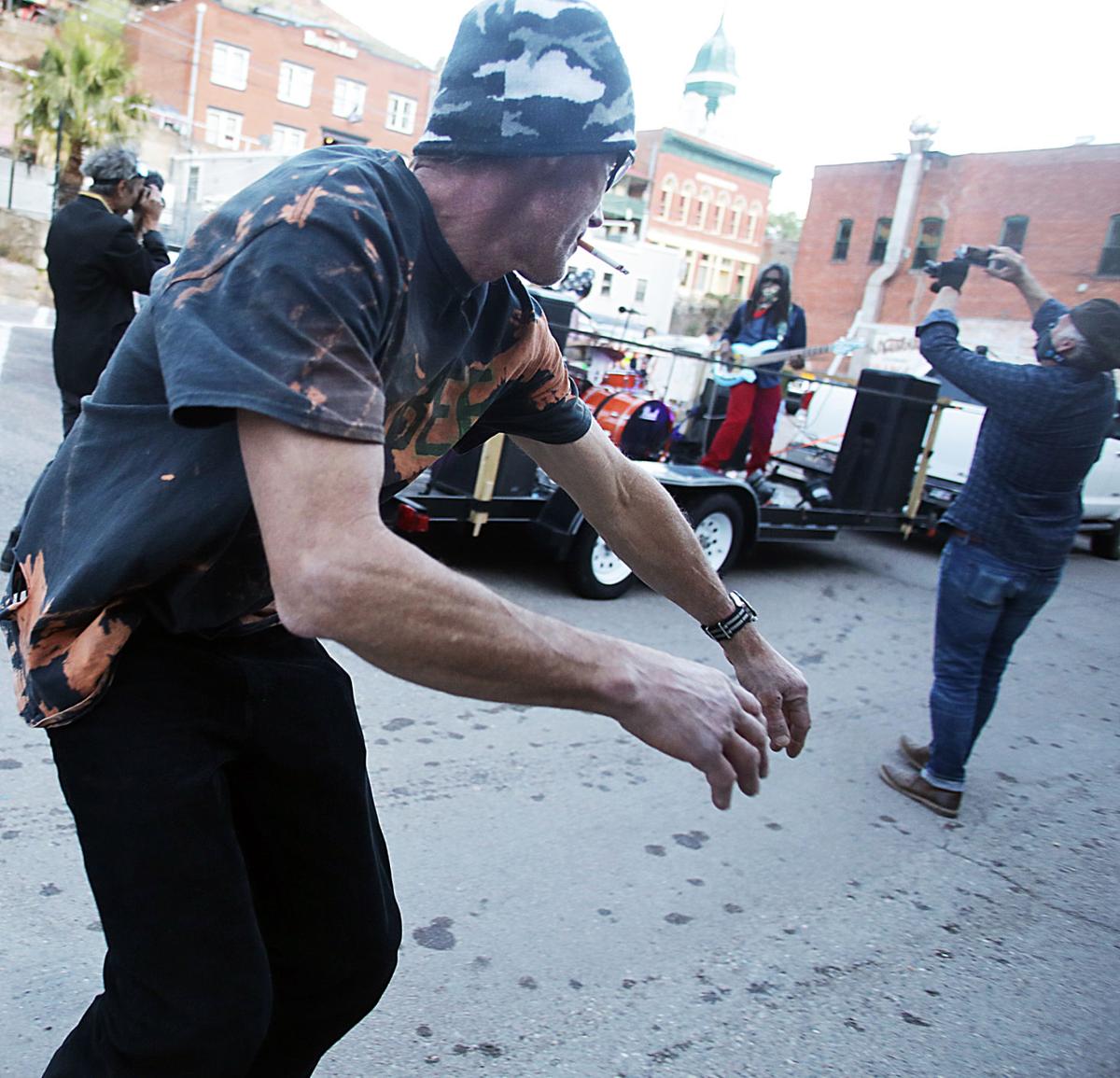 A music lover rides a skateboard as he rolls by the concert flatbed trailer in Brewery Gulch.

Local professional journalism is not free. In the effort to inform during COVID-19 we're providing this story for your benefit. Please join us, subscribe now..
1 of 13

Melissa Reaves leads a trio of musicians during their Rock-N-Rolling Relief Concert through the streets of Old Bisbee last Saturday.

Pedestrians on the streets of Bisbee show their appreciation as a rolling trio of musicians entertain last week.

A music fan moves to the sounds in Brewery Gulch during Saturday’s rolling concert.

A pedestrian captures the moment as the Rock-N-Rolling Relief Concert makes its way down Main Street.

The Rock-N-Rolling Relief Concert rolls down Main Street as they perform in Bisbee.

A Rock-N-Rolling Relief Concert fan creates a keepsake of Saturday’s performance in Bisbee.

A music lover rides a skateboard as he rolls by the concert flatbed trailer in Brewery Gulch.

At the age of four I became pretty obsessed with the drums. No other instrument could quite compare with the magic that emanated from the throne at the back of the stage. Somewhere, there is a reel-to-reel tape with an OshKosh B’gosh wearing me, accompanying my pops on the bongos while he strummed and sang “I’m Your Boogie Man.” It was 1978 and I guess you could say that was my first band. I was counting the days till I could play an actual drum set.

Jump forward to 1994. I finally owned a complete set and I was mind-numbingly “boom clicking” along to country hit, Neon Moon, in a country band at the VFW. I was paying the bills, living the dream. And again jump forward to a few weeks ago and my drums sat, in silence, in my living room. I’ll play them for recordings or along with the stereo, but it takes a very special project for me to load them in the car. Maybe I’m looking for that ‘78 feeling.

Fortunately, I recently got a text from Bisbee/NC legend, Melissa Reaves asking me to play a “moving concert” on a flat-bed along with her and Steve Vai bassist, Philip Bynoe. My experiences jamming with them before have been nothing short of magicky, and their musical level of looseness and tightness at the same time has left me feeling completely blessed to share in their joyful noise.

The moving concert was an idea that sprouted from a conversation between Melissa and Bruce Springsteen photographer and Bisbee resident, Dave Rose. I know your next question, “Was Brad Pitt’s hairdresser there?” I’m not making this stuff up. And no.

Dave said he was traveling a lot in the last couple months and noticed people being cautious about the coronavirus in late February. “When I flew home, there were 20 people on the airplane, all spread out. Everyone’s looking at each other like they’re assassins” he said half-jokingly.

When he got back to Bisbee he decided to quarantine himself in his studio. “Ten days in and Melissa Reaves pulled up front. I’m talking to her out of the second story window,” he said. He asked her if she brought her guitar because he could sure use some entertainment. From there they talked about how the town could all use some entertainment, with all of the bars being closed. “Let’s take the music to them,” they decided.

Phone calls were made, a date was set, a trailer and generator were donated, a sound man and PA system was secured, film crew assembled, a banner was painted “Rock and Rolling for Relief” and to make it official, a Facebook event was created. “Two or three days later It just came together, everyone wanted to help,” Dave said.

“With a three piece (band), we could keep everybody spread out,” he added. “This was not only entertainment, but a great way to show people that this is serious, separation is serious.”

Using humor to get the point across, someone on the crew was enlisted to walk around the crowd and band wielding a tape measure “enforcing” the six-foot recommended personal space we’ve been asked to adhere to in recent weeks.

I was really impressed how smoothly everything went, starting with the fastening of the gear to the trailer all the way to the final notes played to a thankful crowd. The feeling in Bisbee has been eerie and quiet over the last couple weeks. For a town that is known for its live music, not having it in the bars feels sort of like its soul is missing. I think a rowdy band on a moving flatbed, belting out a rock rendition of James Brown’s, “I Feel Good” seemed like the perfect prescription (me trying to avoid saying “just what the doctor… “).

“The emotion that I had coming down the canyon and the energy that I felt from the people that we were passing and seeing was so overwhelming,” said Reaves. “I feel like things came together pretty easy for what we did. I feel like it was the right thing to do and we also tried our best to stay in compliance with the social distancing we need to adhere to right now, in order to arrest this virus,” she said.

Bynoe added, “I thought, for the community, when we were driving down and people were coming out waving, I thought that was good because people have pretty much been trapped in their homes.” He liked the idea that music is still something everyone can enjoy, even if it’s at a distance, with masks on and being mindful of the six-foot rule, yet joyous at the same time.

“It’s a new normal of sorts,” adds Reaves “at least for right now.”

The rolling concert “shoved off” from the Jonquil Hotel, climbed up to the top of Tombstone Canyon, where a few numbers were performed to some surprised hikers. There was a great moment after we hit that last beat of a song that I heard cheers from the city below. As we descended the windy road, the musical trailer started acquiring a moving audience of cars, bikes and people running behind. Since we were traveling slower than the 15 mph speed limit, it was necessary to pull over to keep traffic flowing.

Another stop was made in the gulch to a happy crowd and a final stop at the big parking lot where people in cars began showing up. As mentioned before, people seemed very attentive to the necessary social distancing while still having a good time. “For the people that weren’t on the route, the drive-in concept was fun,” Dave said.

“Bisbee is a great music town and it’s wonderful it can provide music in troubled times”, said Mayor David Smith. “I believe this is something we can do again if we can work out the logistics of crowd control.”

Reaves said, “I appreciate everyone involved’s energy. I’m super grateful for everyone’s willingness and go for it attitude.”

With the state-wide, “Stay at home” order going into effect this week, a future moving “Rock for Relief” concert might be enjoyed from the porch. Something there is no shortage of in Bisbee. Cheers to that!

Mike Montoya has been a Bisbee musician for more than 15 years. He can be reached at mikemontoyamusic@gmail.com.

Trailer donated by Jay Allen, stage lighting donated by Dan Simonis and use of the parking lot by the Page family.