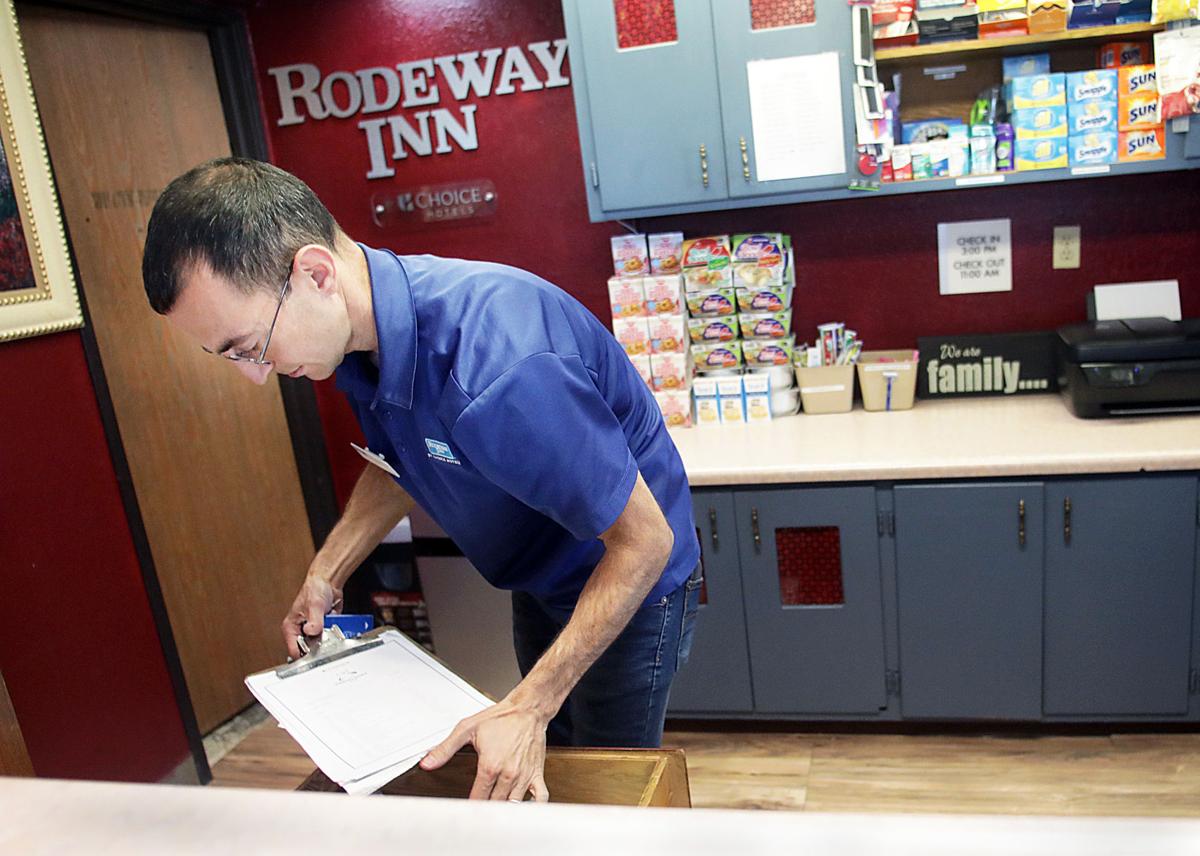 Marvin Kouza works at the front desk at the Sierra Vista Rodeway Inn Tuesday. In the background are some food items that guests must eat in their rooms. 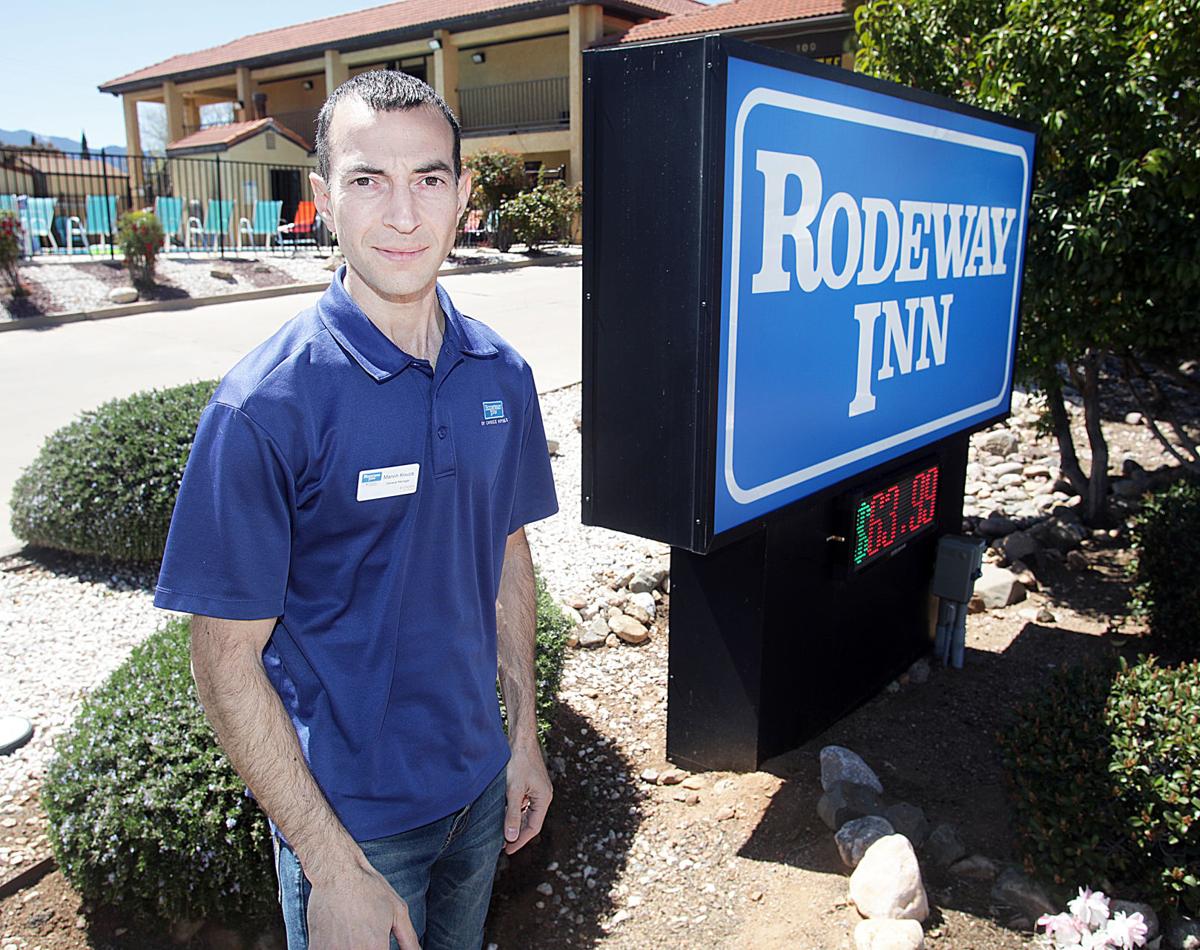 We have lifted the paywall on this story. To support essential reporting, please consider becoming a subscriber.
1 of 2

Marvin Kouza works at the front desk at the Sierra Vista Rodeway Inn Tuesday. In the background are some food items that guests must eat in their rooms.

REGION — There’s plenty of room at the inn.

That was the dismal news at many hotels, motels and inns across Cochise County Tuesday, where owners, managers and front desk clerks reported a plunge in bookings after potential guests called to cancel their reservations because of the rampant spread of COVID-19.

Owners and managers at a handful of establishments also said they had to lay off some of their employees because there’s not enough work and very little revenue coming in from guests.

“Everybody is cancelling,” said Candice King at the front desk of the Budget Host Inn on Fremont Street in Tombstone. “We’re about 80 percent down in occupancy”

King also said the motel has reduced its staff by about six percent.

The coronavirus pandemic has forced people to scratch their travel plans as they practice social distancing and incessant hand-washing in order to keep the virus at bay. From the larger hotel chains in Sierra Vista to the smallest and quaintest inns in Tombstone and Bisbee, the situation was the same — few to no occupants in the rooms.

Earlier this week, the American Hotel and Lodging Association — which just put out a list of the losses suffered by the lodging industry in each state because of COVID-19 — said in a statement that “the hotel industry is facing an abrupt and unprecedented drop in hotel demand that is gaining pace and getting progressively deeper and more severe week by week.

Kim Sabow, president of the Arizona Lodging and Tourism Association, said hotels and motels have not been asked to shut down in the state because they are considered an “essential business” by the governor’s office because they offer lodging and delivery or carry-out food service. But these establishments are in for a tough ride.

“Given the current economic climate and sudden reduction in occupancy, some hotels have closed temporarily or furloughed staff due to the loss of revenue,” Sabow saif Tuesday. “In addition, Gov. Ducey’s executive order yesterday listed hotels and motels as essential business operations to the extent they are used for lodging and delivery or carry-out food services.”

Staff at many of the hotels contacted by the Herald/Review on Tuesday said they’ve had to change the way they provide food and drinks to the few guests they do have — the order of the day is take-out.

At the Windemere Hotel and Conference Center in Sierra Vista on State Highway 92, guests are being given a boxed breakfast that they can take to their rooms, said front desk manager April Waters. The hotel has 101 rooms and there have been many cancellations.

At the Bisbee Grand Hotel on Main Street in Old Bisbee, walk-in guests are being offered a 25 percent discount on any of the picturesque hotel’s 11 rooms, said employee Matt Dacosta.

“We’re just trying to make money in any way we can,” Dacosta said. “We’ve had a lot of cancellations.”

The Bisbee Grand also has a popular bar and restaurant that features live music almost weekly. Dacosta said staff is adjusting to “pivoting to take-out with our food and drinks.”

Breakfast is still being served at the Rodeway Inn on Fab Avenue in Sierra Vista, said manager Marvin Kouza, but guests have to eat it in their rooms. Kouza said occupancy has dropped by about 60 percent and he’s had to lay off 50 percent of his workers, mostly in the housekeeping department.

Eva Rupert, co-owner of the Jonquil Motel in Old Bisbee, said her housekeeping staff is currently “on speed-dial.” The motel has seven rooms, each opening out into a courtyard. Rupert’s occupancy is usually at 100 percent, but Tuesday she said she was down 95 percent.

“Obviously, tourism has come to a standstill,” said Rupert, who lives on-site. “The best thing we can do right now is stay put and make good choices.”