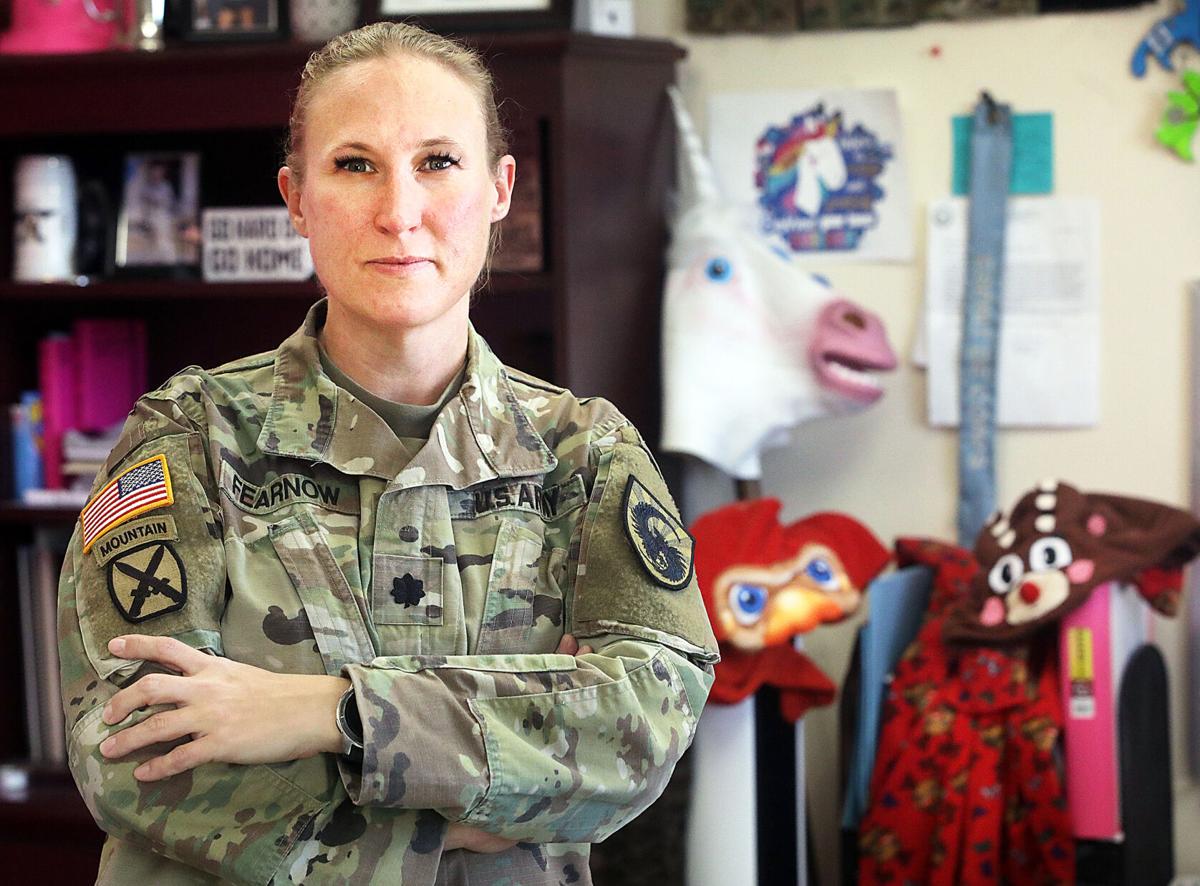 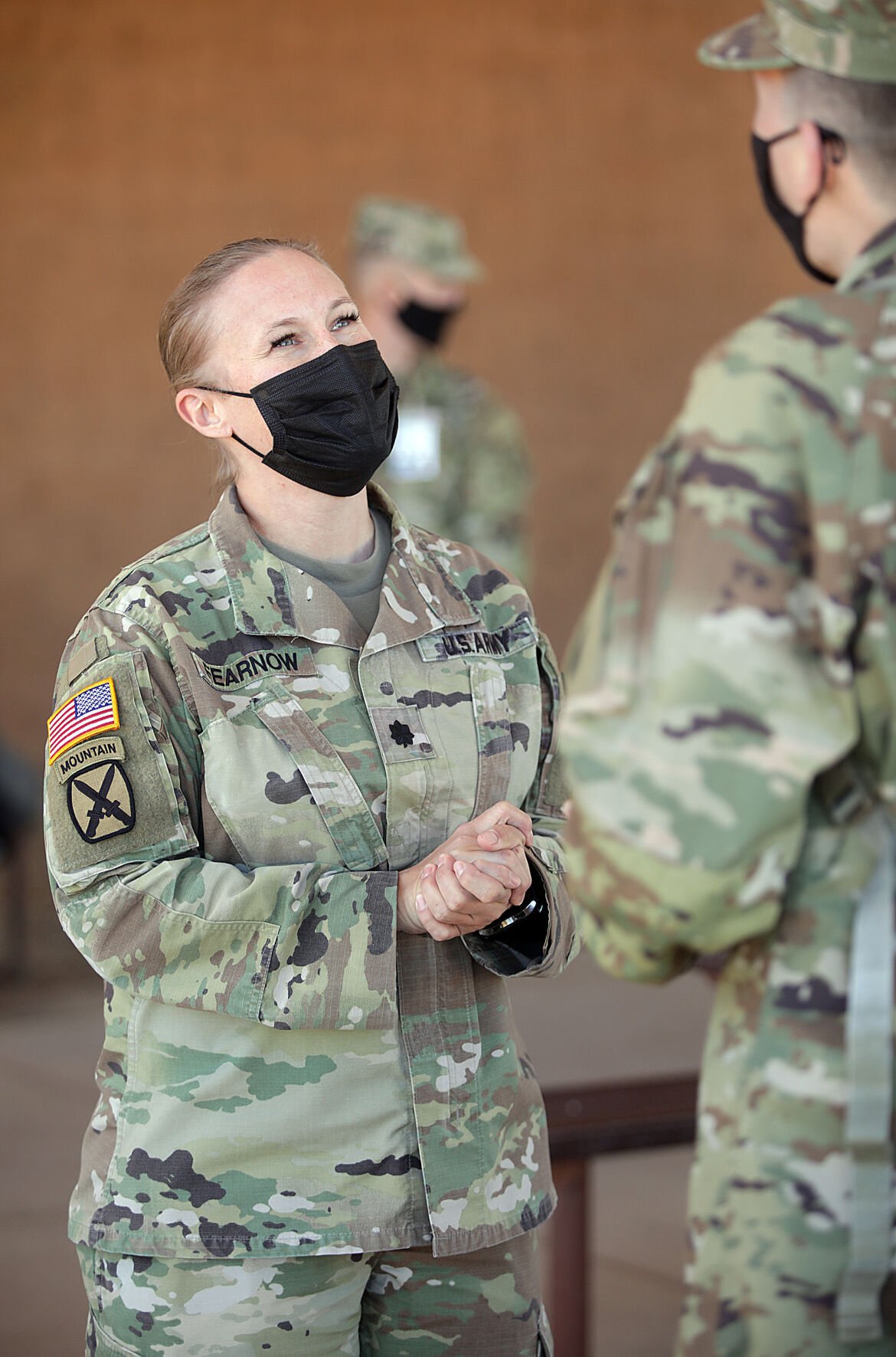 FORT HUACHUCA — A 20-year veteran of the Army, this commander believes in the Golden Rule and being an approachable leader who can relate to her soldiers.

So far that philosophy seems to be working for Lt. Col. T.J. Fearnow, commander of the 305th Military Intelligence Battalion at Fort Huachuca.

While Fearnow’s duties on post will end this summer when she relinquishes her command to another soldier, her style of leadership has left an indelible impression at the installation because she genuinely cares about how her soldiers are doing, especially over the last few months under the strains of COVID-19.

At Thanksgiving and Christmas, Fearnow donned costumes for each holiday with the intent of lightening the mood for the troops in the face of the pandemic.

“Sometimes we just need to smile and just simply laugh,” Fearnow said. “If I can provide that moment, when all the stress simply falls away, then why not? I dress up because it’s unexpected, it’s simple, it’s human, and it’s just funny.”

At one of the mess halls on Thanksgiving Day, several Advanced Individual Training students enjoyed seeing the leader dressed as a turkey. A handful of them said they could not go home after basic training because of the virus, and seeing Fearnow’s actions in an effort to bring them some joy went a long way.

Fearnow’s boss, Col. Loren Traugutt, said the dynamic commander is a significant presence among the more than 1,000 soldiers under her watch.

“T.J. Fearnow’s presence as a leader is second to none,” said Traugutt, commander of the 111th Military Intelligence Battalion. “Every time I walk through her battalion area with TJ, every single soldier we come across knows who she is. It’s clear to me they look up to her and respect her.

“Her influence over the 1,000-plus soldiers under her command is incredibly impressive.”

Besides making her soldiers smile, Fearnow also has been a huge advocate of making sure the troops are in good mental health, especially because of the necessary restrictions the pandemic forced upon all soldiers. An emphasis has been placed on suicide prevention at the installation and making sure soldiers reach out for help if they’re feeling isolated or depressed, simply because of the massive changes prompted by COVID-19.

Fearnow is one of the leaders who routine stressed the importance of “watching out for your battle buddy” and telling soldiers that it’s OK to reach out to others if things are getting a little too overwhelming.

“Being in the Army is about building new relationships and growing the Army family,” Fearnow said. “We are all brothers and sisters in arms ... we are all vital to mission success, we all need each other.

“We have shared experiences that bond us immediately. I tell my soldiers at every graduation that they will experience uncertainty, despair, confusion and depression at some point. But the great thing about the Army is that you always have a brother or sister to turn to no matter where you are in the world. Someone that has walked that path, felt those feelings and rose above it all.”

The lieutenant colonel suffered a monumental loss last summer when her No. 1 cheerleader — her grandmother — passed away on July 2. Fearnow said she, too, received the emotional support she needed.

“I was her soldier and she talked about me any chance she got,” Fearnow said of her grandmother. “My heart broke and for the first time I absolutely felt lost and alone in this world. But this amazing thing happened. My Army family surrounded me. My Army brothers and sisters were there to provide a shoulder to cry on, to listen and to encourage me. There was no rank, there was no shame, they were simply there for me in my time of need. That love, that bond, that team mentality, that is what we do. That is why we are so strong!

“It is in those moments that we feel weak that we need to turn to our Army family and let them help us, even carry us, until we are able to walk again. And then we are, in turn, able to do that for someone else.”

The mother of three children said she does not have a background in mental health. She just loves people.

“I love spending time with people, I love talking to people, I love making people laugh and smile,” Fearnow said. “COVID has been hard for me because so many social functions have been canceled. It’s very easy to start to feel isolated, depressed and stuck. Which is all the more reason why I have to try harder to connect with my soldiers and cadre; to make them feel loved, value-added and to make them smile ... even if it’s six feet apart.”

“Lt. Col. T.J. Fearnow is a soldier’s leader,” Hale said. “She is positively engaged and genuinely concerned for their wellbeing. She is tough, but fair, and wouldn’t ask her soldiers to do anything she hasn’t done herself.”

While she enjoys keeping things light and making people smile, Fearnow said there is a time and place for everything and naturally, there are moments when she must be the serious commander. Regardless, she does not believe she has to be rigid or uptight in order to have the respect of her troops. She does not prescribe to the philosophy that a leader must be rigid or unapproachable.

“I have worked for the serious, rigid, uptight type,” Fearnow said. “Those leaders aren’t approachable, they aren’t relatable, they don’t appear genuine or even human at times. I don’t want to be that. I very much want to be approachable and relatable and genuine all the time. Don’t get me wrong, I have my critics; those who don’t like my leadership style. But you can’t make everyone happy.

“I try to be the best leader and soldier I can be every single day. I believe in the Golden Rule; just treat everyone the way I want to be treated. So far, it seems to be working for me.”

It seems Fearnow not only loves people, but she has long loved the Army, too. She was hooked in high school when she joined the JROTC.

“I walked into my high school for freshman orientation and there was a JROTC cadet standing there in her uniform speaking so confidently with parents,” she said. “I looked at my mom and said, ‘I want to do that.’ I have been doing ‘that’ ever since. Four years of JROTC, four years of ROTC, and I will have 20 years of active service this May. I joined the Army because it felt right, it felt natural. I wanted to serve my country, to lead and to hopefully make a difference.”

Making soldiers into leaders and caring about their mental well is this commander’s mission, but how does Fearnow relax and unwind?

“I have three children — ages 10, 8, and 2,” she says. “My husband and I spend our time supporting our children in Girl Scouts, football, cheerleading, dirt bike riding, violin, jiu-jitsu, CrossFit and anything else they want to try.”