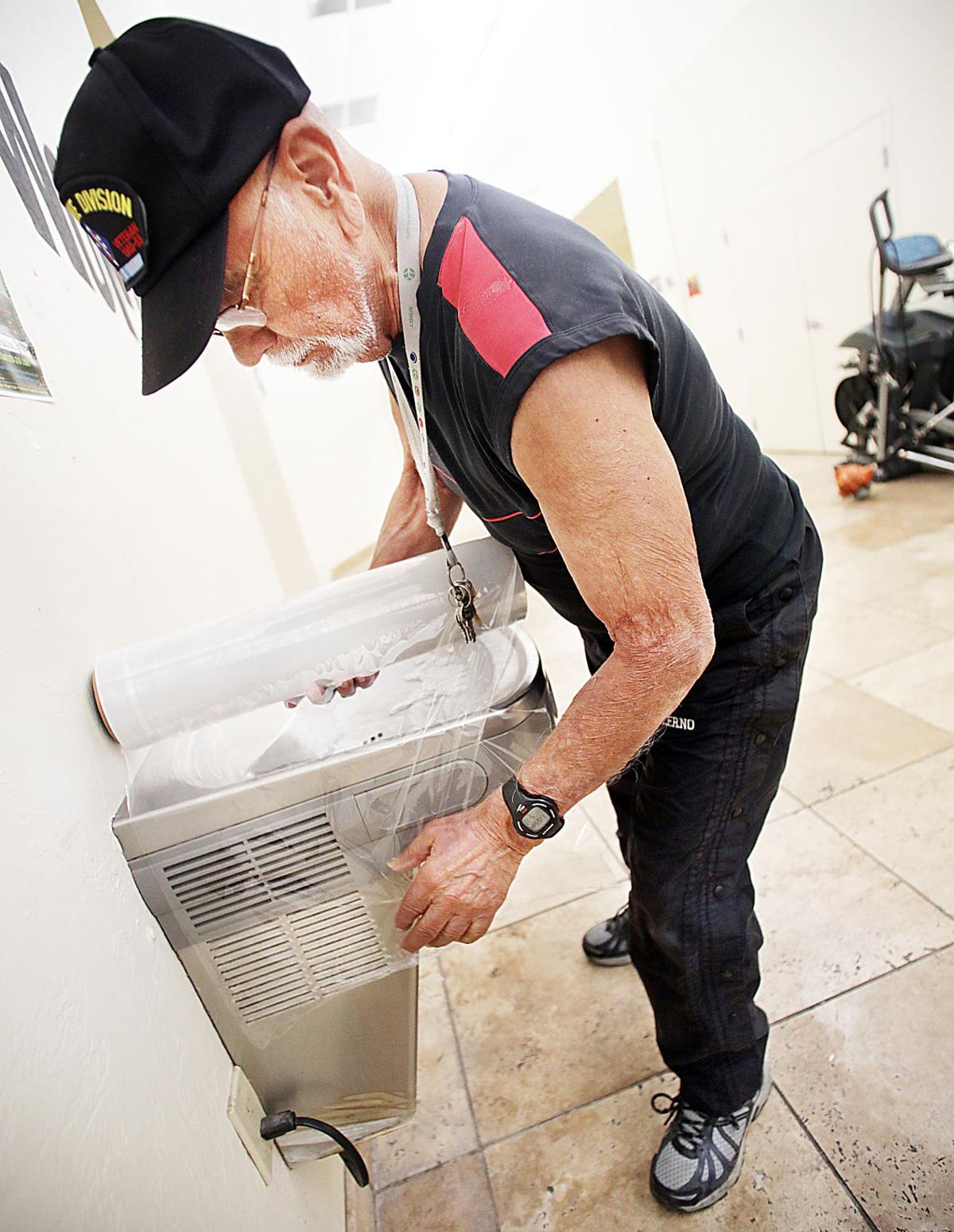 Buena Health Fitness founder/owner Hank Diaz begins to close off the first of two water fountains in the gym Wednesday. The fitness center will be implementing a host of safety precautions due to COVID-19. 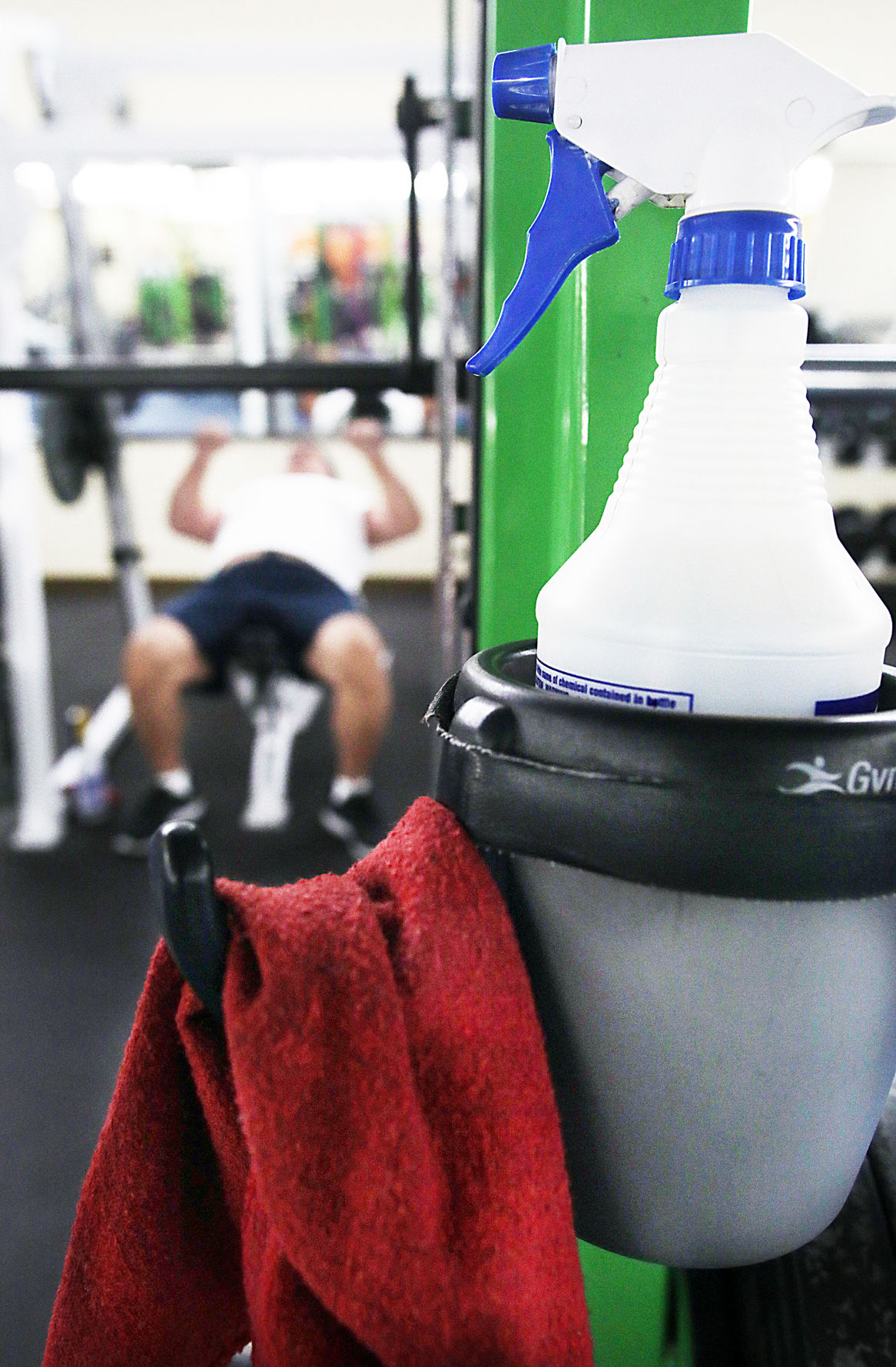 Several bottles of sanitizer are spread throughout Buena Health Fitness.

Buena Health Fitness founder/owner Hank Diaz begins to close off the first of two water fountains in the gym Wednesday. The fitness center will be implementing a host of safety precautions due to COVID-19.

Several bottles of sanitizer are spread throughout Buena Health Fitness.

REGION — As the state enters its new normal, with stay-at-home orders expiring and businesses slowly opening their doors, exercise enthusiasts are ready to start working out again.

Gyms were in the last phase of businesses allowed to reopen and were told they could resume on Wednesday during Governor Doug Ducey’s press conference the previous day.

CrossFit Huachuca, located at 4066 E. Monsanto Drive in Sierra Vista, announced on its Facebook page that it will be resuming classes of Friday, however, to be in line with the governor’s regulations, reservations for the classes need to be made.

“We will be running a class reservation system, with limited amount of spots per class to allow for social distancing, while maintaining a safe environment,” the post says.

At Buena Health Fitness, owner Hank Diaz said he wrote a letter to the governor’s office saying his gym would be opening on May 16, “come hell or high water.”

But Diaz was able to open his fitness center on Wednesday following Ducey’s announcement on Tuesday.

Regardless of the governor’s announcement though, Diaz said attendance at his gym was “well below normal.”

“They’re afraid,” he said of his members. “That’s understandable, especially for the older members who come here.”

Diaz, who is 86, said his son Danny, who co-owns the facility, was concerned about him being in the gym as well.

“I wear a mask when I’m out on the floor,” the elder Diaz said with a chuckle.

Classes at the gym are on hold for the moment, except for Hot Yoga, which is scheduled for Saturday at 9:30 a.m., Diaz said.

“We’re going to see how it goes with the yoga class and then we’ll see about bringing back the other classes,” he said.

“We had announced on Wednesday that we were opening,” Schlaegel said.

While employees at Summit are wearing masks, Schlaegel said members aren’t required to. Like Buena Health Fitness, there are several signs around the facility reminding people of health guidelines.

Arizona St. Fitness in the Warren District of Bisbee, a 24-hour gym, never closed the outdoor workout area. But co-owner Shawn Stoeckel said the indoor gym opened Wednesday, much to his relief and the joy of his members.

“People are crazy happy,” Stoeckel said Thursday. “Everybody just wants to get back to doing their own thing.”

There are no health guidelines plastered all over the gym’s 1,500-square-foot exercise area. Because his facility is smaller, Stoeckel said he can’t separate exercise machines. He said his members however, know what to do: “People are doing it (social distancing) themselves.”

While many local gyms have decided to resume business, Planet Fitness is taking time to devise a plan before opening their doors. Becky Zirlen, senior public relations manager for Planet Fitness, said in an email statement that the plan is for the Sierra Vista location to open its doors by the end of the month.

“At Planet Fitness, the safety of our team and members is our top priority, as we begin to execute a thoughtful and phased reopening approach,” the statement said.

In doing so, we are taking a number of steps to protect the health and well-being of our team members and members, which include enhanced cleanliness and sanitation policies and procedures, physical distancing measures, reducing physical touch points in the club, and more.”

“Now more than ever it’s important to stay active, in order to stay healthy, and we look forward to safely and responsibly welcoming our members back to Planet Fitness,” the statement concluded.

Jose Perez and Curtis Washington, owners of Blackout MMA in Sierra Vista, are also taking caution and keeping their doors closed for the remainder of the month. Perez said as of now the plan is to remain closed until June 1.

He said that although they fall under the category of a gym, the contact their sports require prevents them for being able to practice social distancing, which is why he and Washington decided to wait to open.

“A life is worth way more than collecting a monthly payment,” Perez said. “We consider our place a safe zone, and so we have to keep it safe.”