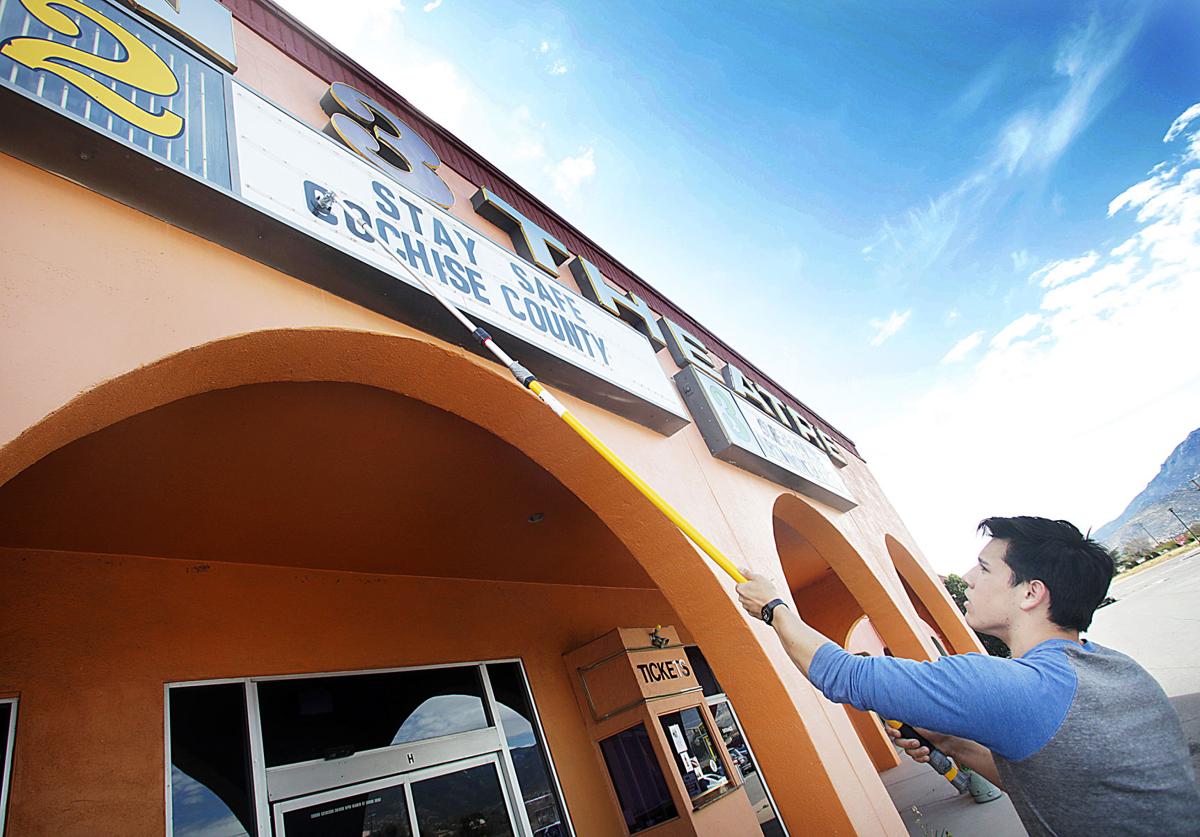 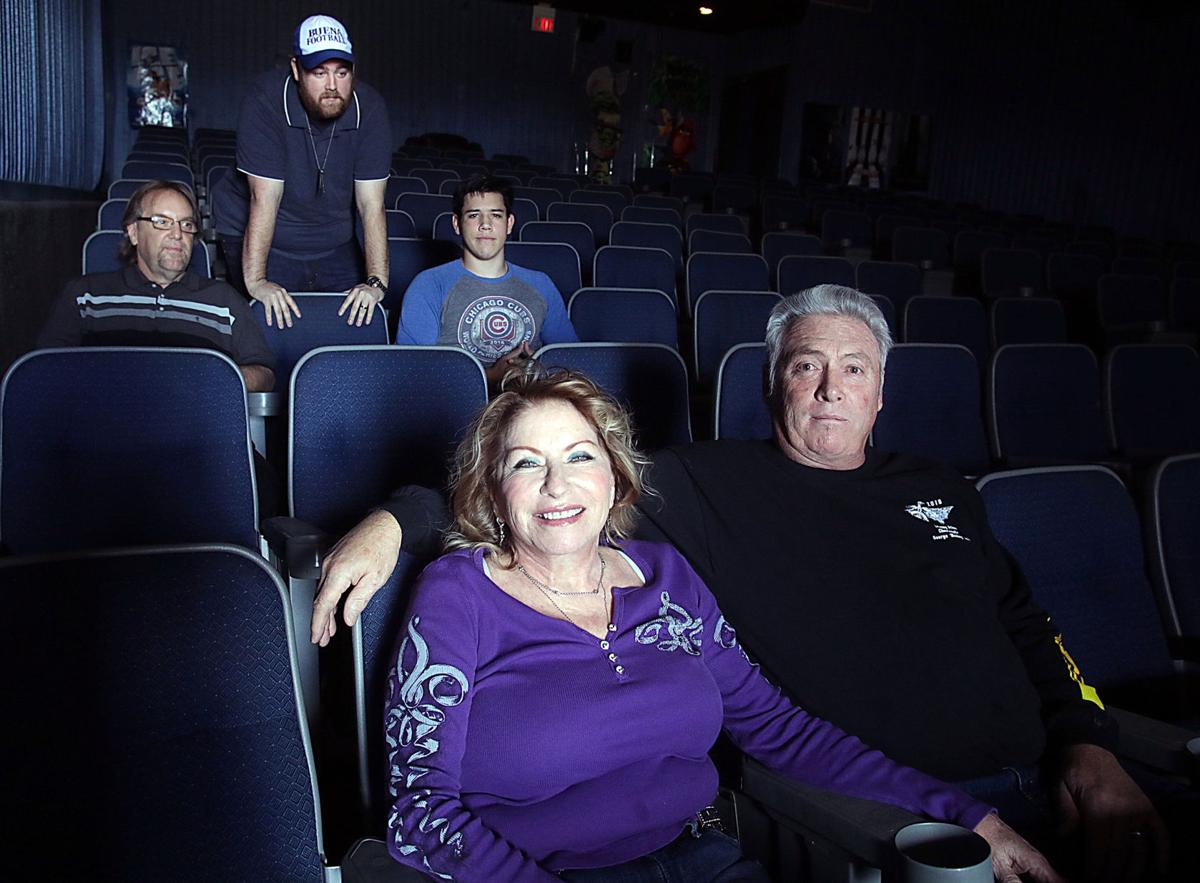 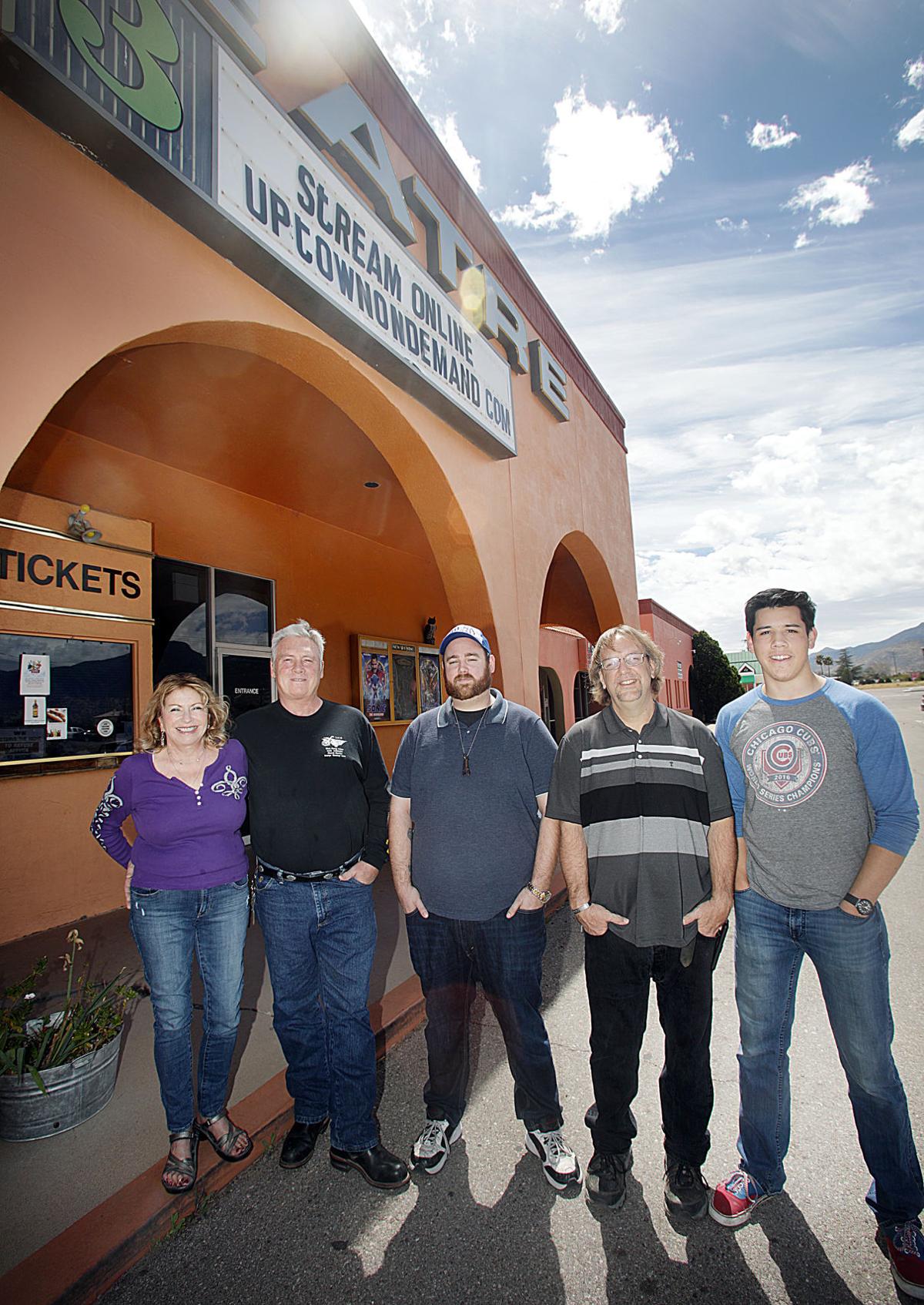 The Uptown Theatre has been owned and run by Dee Cortez-Foote for 27 years. Cortez-Foote stands with her husband, Jeff. Theater crew standing next to the theater is Levi James, center, Bobby Vogelgesang and Trevor Valenzuela, right.

The Uptown Theatre has been owned and run by Dee Cortez-Foote for 27 years. Cortez-Foote stands with her husband, Jeff. Theater crew standing next to the theater is Levi James, center, Bobby Vogelgesang and Trevor Valenzuela, right.

Before COVID-19 enveloped the lives of people in Cochise County and beyond, Uptown Theatre owners Dee Cortez-Foote and husband Jeff Foote couldn’t help but notice that the month of March was very slow.

Jeff thought they should close the movie house.

But Dee said to him, “The phone’s ringing off the hook and people want to come in and watch a movie. As long as the public wanted us to be open, we wanted to stay open.”

When Gov. Doug Ducey made the call for restaurants and movie theaters to shut down, the decision was made for many businesses, including the locally owned theater.

Now, four of the five employees and owners are unemployed except for Jeff, who is a truck driver.

“I’m now in the process of applying for the forgivable loan so we can get some back pay for everybody, since we shut down on the 20th,” Dee said.

The loan will be projected toward the future as well, for when the theater eventually reopens, she said.

After closing down, Dee then turned to the theater’s business associate, Levi James, who suggested live-streaming movies.

“Essentially, it is a video-on-demand service for our customers,” he explained. “A couple of days after we had to close down, we put up a Facebook post asking if people would support something like that. We had well over 200 responses. People here in the community are saying they would support it.”

James spent the next week setting up the website, including acquiring the domain name. James then began the arduous task of contacting independent filmmakers from all over the world to get projects and films to be aired on the platform.

“The big part of that is, because major motion Hollywood picture films aren’t coming out for the next at least 6 months, in terms of content, unless you’re tuning into things like Netflix or Amazon, you’re not going to have new stuff,” he said.

The platform will help support the theater with some sorely needed revenue to assist in paying rent and monthly overhead costs. The live streaming will also support independent filmmakers all over the country who need venues to show their movies.

“It’s a rough and rocky trail now everywhere you go,” said Uptown Theatre Manager Bobby Vogelgesang. “It’s no fun wondering if you’re going to get paid again or get the bug and then bring it home.”

Vogelgesang said he lives with his elderly father and is concerned about the possibility of passing on an illness to him.

The coronavirus pandemic is already changing the business landscape, not only in movie houses across the world, but in every other industry.

Dee said she doesn’t think things will ever be the same again with the moviehouse business.

“Levi has been talking about drive-ins and I think that may be the wave of the future,” she said. “We went from drive-ins to theaters and we’re going back to drive-ins.”

Valenzuela mentioned, “As long as it starts back up again, I’m gonna be fine.” He laughed and reflected that this whole pandemic thing has made him realize how little he has to do outside of work.

He said he misses talking movies with customers and looks forward to when the theater is back up and running while imploring the customers to stop by to say hello and talk.

“Work takes up so much of my time, I imagine what I would do if I had all this free time,” he said. “Now, I have all the time in the world.”

In unison, all of the Uptown workers said they definitely miss the customers.

Jeff has a positive attitude while talking about finishing things that had been put on the back burner until now.

“In 30 days, things will hopefully get better,” he said. “I have faith in America and the American people. I think we’re all going to pull together, we’re going to be strong and we’re going to beat this invisible enemy.”

James said the last few months have been a wild ride, but the theater has rolled with the punches while coming up with new ways to creatively incorporate movies and events for customers.

“At the end of the day, hopefully, those reading about this realize how much of an impact we’ve made on the community and realize that we need them now more than ever if we’re going to make it through this and be here at the end of this thing,” he said.

“It’s not just us, it’s not just our company, there’s lots of other businesses in Sierra Vista that support local sports teams, local charities, local educational opportunities, that are also affected by this.”

James makes a point by mentioning businesses and especially small businesses who need just as much assistance as individuals who may also be suffering. He finished by saying, “We want to be there for you when this is over and done with, but we will need some help.”

Dee dropped a bit of a bombshell, saying, “I hope that Levi is able to pull through and keep the theater open for future customers, because I’m thinking about retiring. This COVID virus was pretty much my last straw. I’ve been running the business for the last 27 years and I’m pooped out.”

Dee said she believes in James and the Uptown Theatre, and it’s a great place for the community to be.