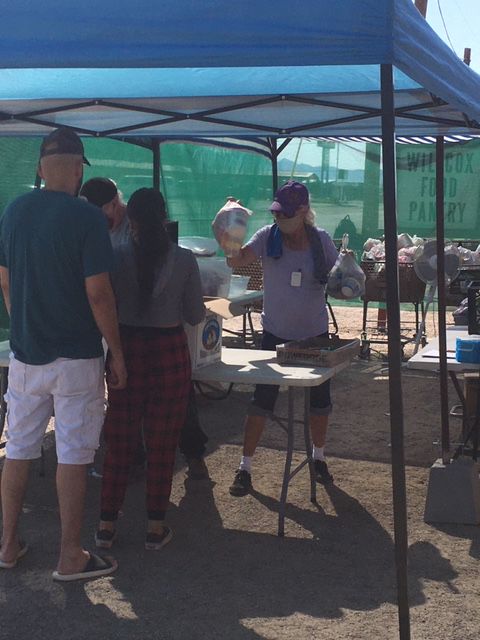 Nell Worden hands out food to customers July 7 at the food pantry. 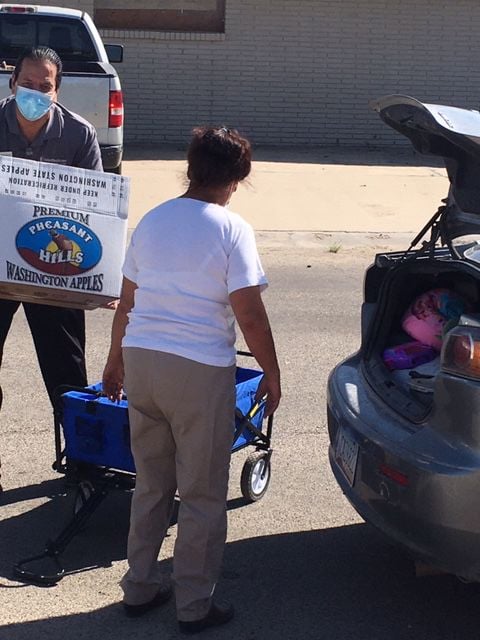 Fernando Diaz delivers a box of food to a pantry-goer Karen Quijada.

Nell Worden hands out food to customers July 7 at the food pantry.

Fernando Diaz delivers a box of food to a pantry-goer Karen Quijada.

The number of people seeking help at the Willcox Community Food Pantry has doubled since the beginning of COVID-19.

Nell Worden, Willcox Pantry director, said 400 people are visiting the pantry every week now and suspects it’s because they’ve lost their jobs as a result of the pandemic.

On average, people who visit the pantry go home to feed a family of four, Worden said. This means the pantry is feeding roughly 1,600 people per week.

The pantry may be located in the City of Willcox, but Worden said it serves people in Bowie, San Simon, Sunsites, Sunizona and McNeal, too. On average, Worden said the pantry gives away 30,000 to 40,000 pounds of food per week now.

“For the last three weeks the demand has really gone up,” said Worden. “We’ve never had this many people.”

The pantry received a semi-truck trailer full of food from the Church of Jesus Christ of Latter-Day Saints July 7. This one-time donation brought in 35,000 pounds of groceries.

The National Guard has been delivering food as well, but that will will stop July 23.

“We’re doing fine as far as food is concerned, unless it gets worse,” said Worden.

Worden said she is constantly looking for food sources and funding. She’s taking the challenge of the situation one month at a time.

Rachel Garza, president of the St. Vincent De Paul Society of Willcox, said St. Vincent’s donates food to the pantry as well. Gaza agrees COVID-19 is having a definite impact on people’s livelihoods.

“People’s hours have been cut and others are needing jobs,” said Garza.

“The numbers have increased because I’ve advertised,” said Burgess. “I continually post when the pantry will be open on Facebook.”

Burgess has also been calling members of the community who don’t have access to the Internet or the ability to use smartphones. She provides them with pantry times so they, too, can receive food boxes.