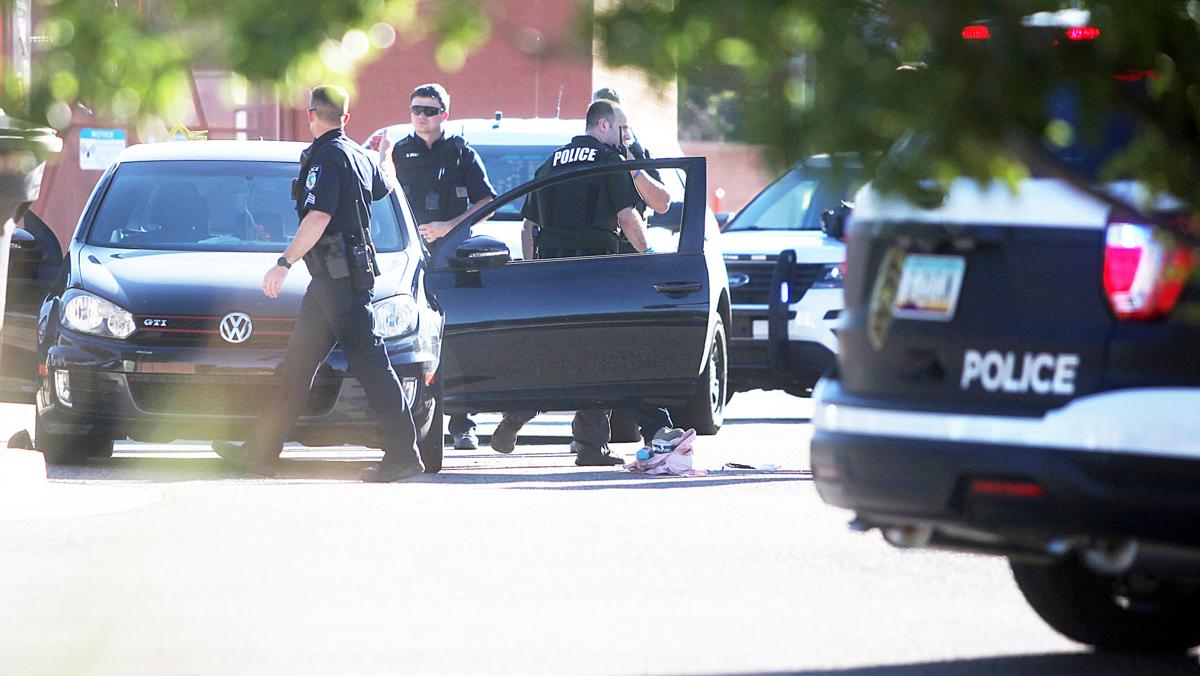 Officers converge on the scene of a murder-suicide at a Sierra Vista transit center last month. A report released Monday revealed the shooter, James Romo, had stolen the gun and turned it on his friend Sylvia Sabo after she broke off a romantic relationship between the two. 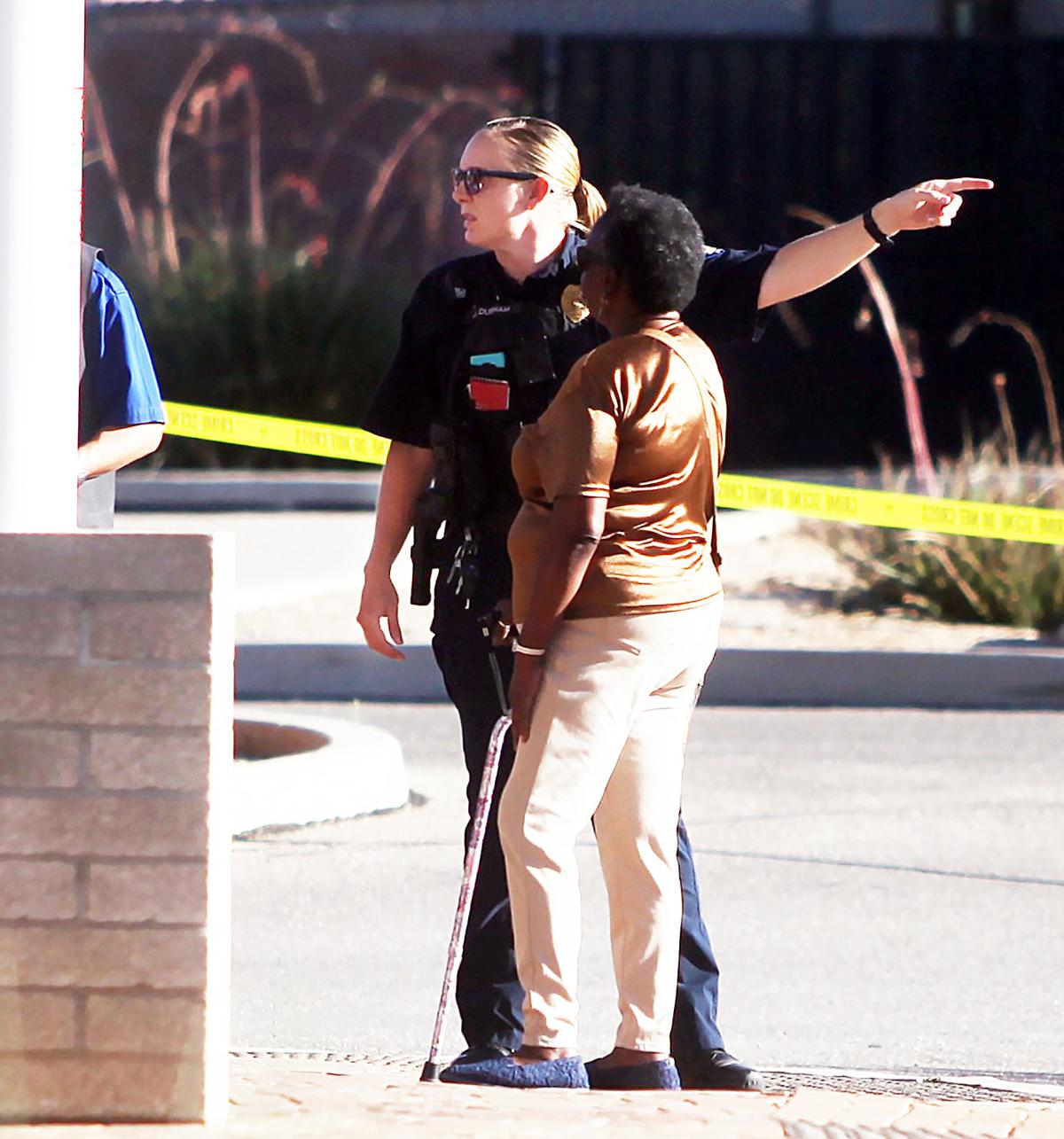 A Sierra Vista police officer responds to a shooting call at a Sierra Vista transit center in October. A 45-page police report released Monday reveals new details between the shooter and victim.

Officers converge on the scene of a murder-suicide at a Sierra Vista transit center last month. A report released Monday revealed the shooter, James Romo, had stolen the gun and turned it on his friend Sylvia Sabo after she broke off a romantic relationship between the two.

A Sierra Vista police officer responds to a shooting call at a Sierra Vista transit center in October. A 45-page police report released Monday reveals new details between the shooter and victim.

SIERRA VISTA — A man who fatally shot a woman in the head as both sat in the victim’s car at the transit station last month had been rejected by the woman after a four-month relationship between the two soured, according to a 45-page Sierra Vista Police report obtained by the Herald/Review.

The afternoon of Oct. 9, Sylvia Sabo was shot once in the head at the Vista Transit Station at Coronado and Wilcox drives after she had purchased a bus ticket to Phoenix, so that James Romo, 48, could go back to his home, according to the report released Monday. The 46-year-old Sabo had known Romo for more than a decade, but the two had started dating in July and she soon tired of him, describing Romo to a close friend as “exhausting,” according to the report.

But based on interviews police conducted with friends of the pair, Romo, a heavy drinker who was facing prison time for a previous felony DUI in Phoenix, could not accept that Sabo had broken it off. Hours before he killed Sabo and then shot himself, Romo stole a .45 caliber handgun from a man he had been staying with, who was a friend of both Romo’s and Sabo’s, the report shows.

The report, comprised of several supplements by Sierra Vista Police officers and investigators who responded to the scene, reveals a difficult relationship between Sabo and Romo, a man she had met several years ago after a cousin of Romo’s introduced them. Friends of both Sabo and Romo said the latter had a drinking problem, with one close friend of Sabo’s telling investigators he was a “raging alcoholic.”

Additionally, before she began dating Romo, Sabo and her husband were trying to mend their marriage, the report shows. The two had gotten back together in January and Sabo’s husband had expressed misgivings about Romo. According to the report, Sabo told her husband that she and Romo were just friends and that she was just trying to “help him.”

The shooting took place Oct. 9 at about 3:30 p.m. in the rear of the transit station where buses normally headed to Phoenix arrive and depart. A surveillance camera captured the incident. Police said the video shows a black 2012 Volkswagen GTI pull up to the curb. A woman identified as Sabo begins taking various pieces of luggage from the vehicle and depositing them on a bench by the curb, according to the report. Romo then emerges from the passenger side.

After he shot Sabo, Romo turned the gun on himself, firing once into his right temple. He died instantly, police said.

The man Romo had been staying with for about three days before the murder-suicide, told authorities that one night he and Romo were having a beer. The man showed Romo his .45 caliber Smith & Wesson gun that he kept in a case under the bar at his residence.

The man said Romo was “upset about the breakup,” but that Romo appeared “optimistic” because he said he would try to get his old job back in Phoenix and possibly hook up with a former girlfriend. The man said Romo had not displayed any “homicidal or suicidal intent,” the report shows.

The day of the shooting, the man who had allowed Romo to stay at his house received a text message from Sabo informing him that she would be putting Romo on a bus to Phoenix that afternoon. That same day at about 3 p.m. the man called Romo to make sure he was at the transit station. The man told police that Romo repeatedly told him to “hold on,” then hung up on him, the report shows.

A short time later, the man learned through Facebook that there was an incident at the transit station. He also received a text message from his other roommate informing him that his gun was not in the case back at his residence. Furthermore, the roommate said that when he got home earlier that day, both Sabo and Romo were there and they were “bickering,” the report shows.

The man said at that point he “started putting things together” and he drove to the Sierra Vista Police Department to report the theft of his gun.

When officers arrived at the scene at the transit station, Romo was already dead inside Sabo’s car, slumped over in the passenger seat, the report shows. Sabo was still alive, breathing heavily. She was airlifted to a Tucson hospital, where she died on Oct. 13, after her family took her off life support.