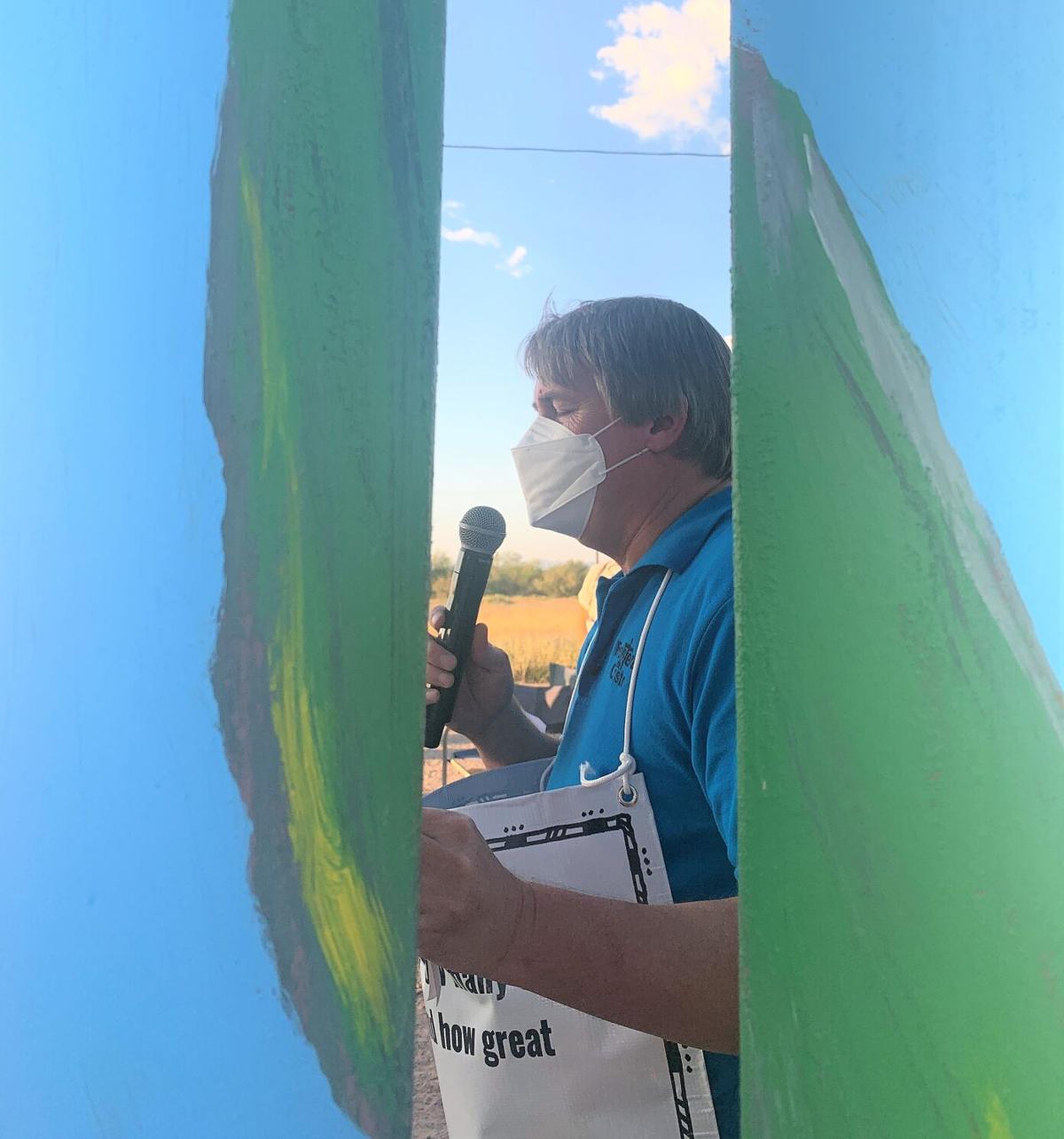 With the border wall in the foreground, Mark Adams of Frontera de Cristo delivers a speech at the Sept. 25 event. 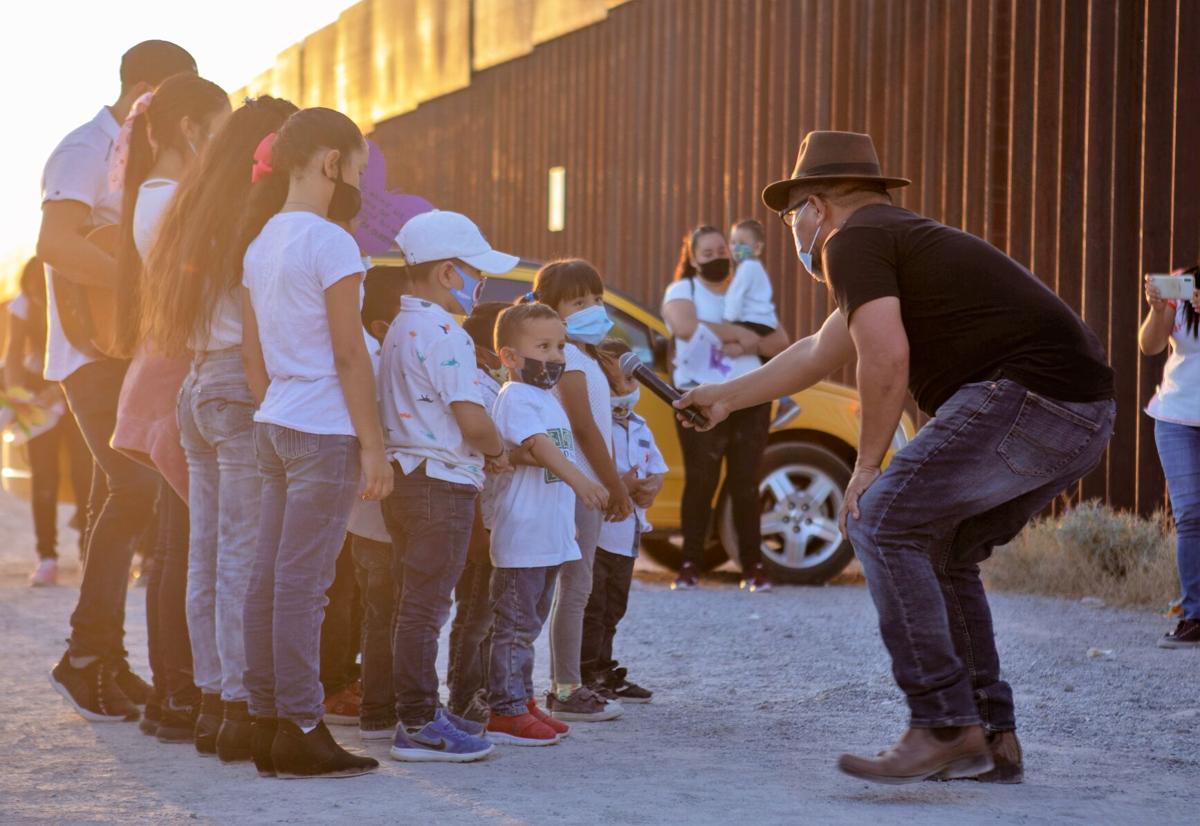 Pictured above are some of the children of the families who are staying at the CAME while awaiting the opportunity to petition for asylum at the Douglas POE. They are singing "Que Los Ninos Canten" (May the Children Sing) by Jose Luis Perales 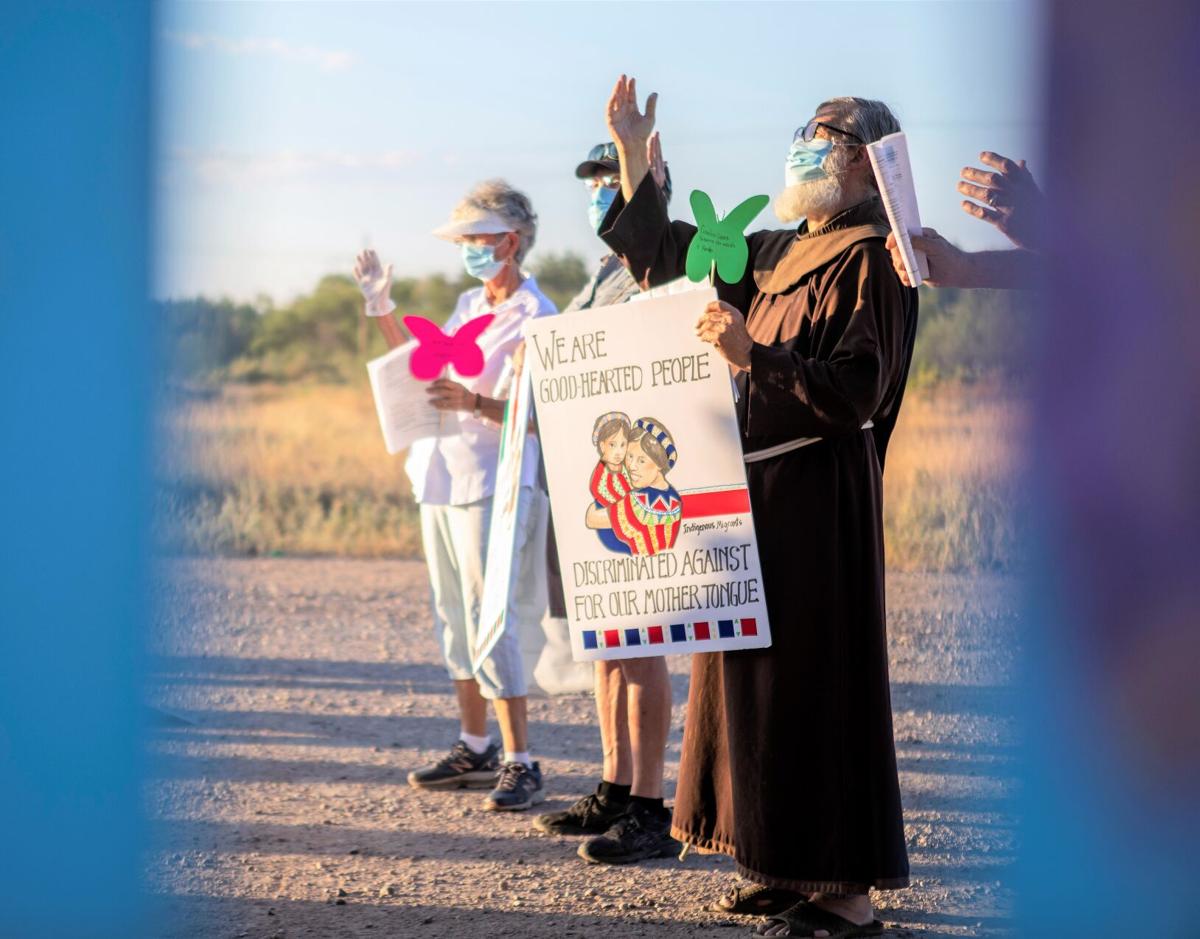 Some of the participants at the Sept. 25 event offer a prayer in support of those seeking asylum. 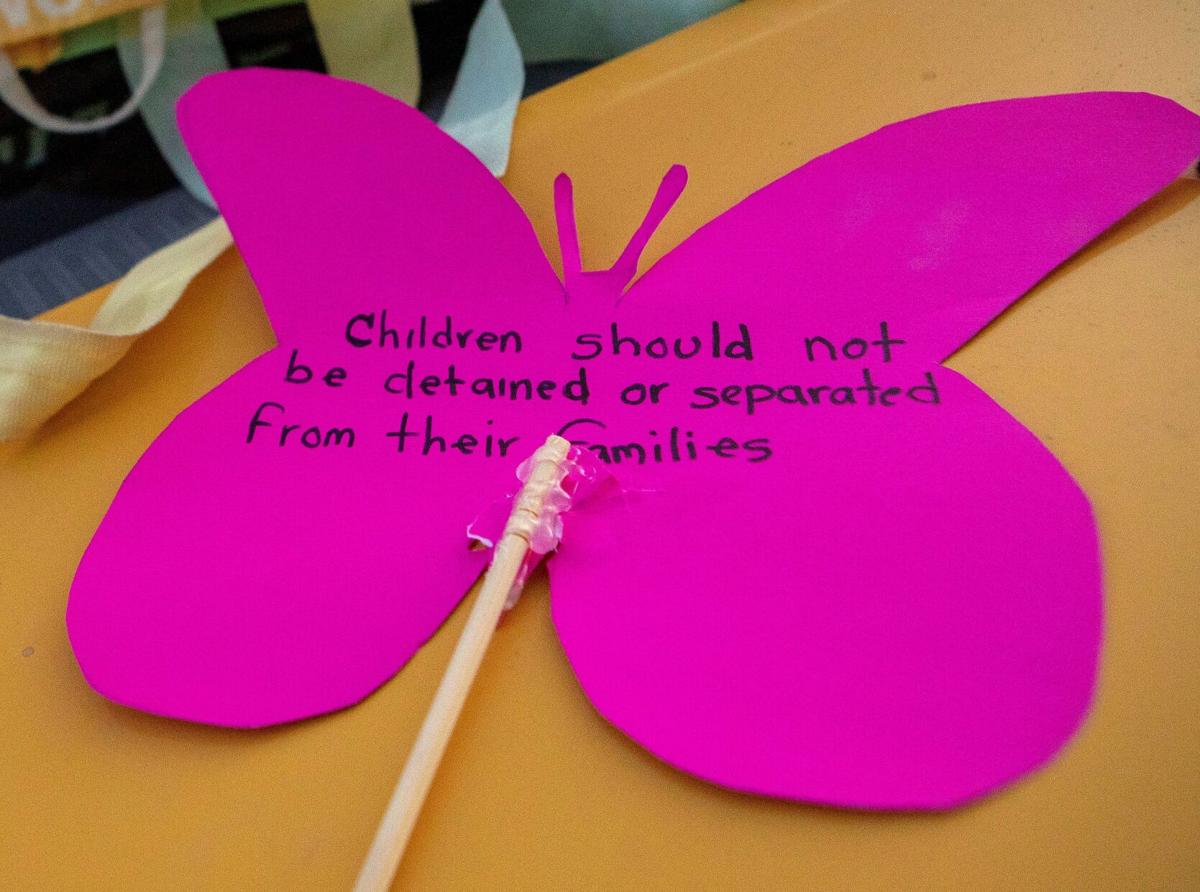 The message on this butterfly offers a message of hope.

With the border wall in the foreground, Mark Adams of Frontera de Cristo delivers a speech at the Sept. 25 event.

Pictured above are some of the children of the families who are staying at the CAME while awaiting the opportunity to petition for asylum at the Douglas POE. They are singing "Que Los Ninos Canten" (May the Children Sing) by Jose Luis Perales

Some of the participants at the Sept. 25 event offer a prayer in support of those seeking asylum.

The message on this butterfly offers a message of hope.

DOUGLAS — Asylum seekers as well as people of faith, artists and local leaders gathered on both sides of the border just west of the Douglas Port of Entry Sept. 25 to pray for and commit to working towards a solution for those seeking asylum in the United States.

The Save Asylum Prayer Gathering was hosted by Frontera de Cristo, a Presbyterian border ministry located in Douglas and Agua Prieta and CAME, an exodus migrant shelter in Agua Prieta, that provides a welcoming and safe place for men, women and children who are far from home.

According to Mark Adams, the U.S. Coordinator of Frontera de Cristo, an estimated 70 people showed up for the event.

“The purpose was to have a time for prayer, to hear testimony and to convince folks on the U.S. side to work for the restoration of our commitment as a nation to receive refugees and asylum seekers,” he said.

Adams stated there are currently families “stuck” in Agua Prieta that have fled the violence of their communities, got to the border and were in line waiting for asylum when COVID-19 hit in March pretty much putting a halt to the process.

“CAME is pretty much their shelter for now,” Adams said.

At the prayer gathering prayers were said, songs sung and testimonies from several people were heard.

Alesia Ash, a representative of Congresswoman Ann Kirkpatrick shared a statement from the congresswoman.

“The United States was built by people leaving their homeland and journeying here for a better life, it’s the great American story. And we are a stronger, more fruitful nation because of immigrants,” the statement reads. “We are stronger and better because of immigrants. Because of immigrants, our nation, our community is better. This President’s immigration policies are cruel and un-American. The policies being implemented right now are not reflective of our country’s values and I am sorry.”

Kirkpatrick added this pandemic has only exacerbated an already flawed process.

“My office is doing everything we can to demand more transparency,” she said. “We have sent countless letters to DHS asking for answers — demanding an end to family separation, demanding communication between agencies and humanitarian organizations, and calling for an end to the MPP- Remain in Mexico policy. We have co-sponsored legislation like The Asylum Seeker Protection Act, a bill that aims to cut funding for MPP. I believe that this is a step in the right direction towards providing a comprehensive solution to providing refuge to those in need.”

“I am the son of immigrants who fled Europe and sought asylum in the United States because they wanted safety from deprivation, danger, and persecution and the chance to start a new life,” Feldman said in his remarks. “I have heard my family’s history and well understand the motivations of the vast majority of those who hope to enter the United States to escape the same problems that brought my family here. The Statue of Liberty stands as a symbol that this country is a place of refuge, not exclusion.”

Eight different testimonies from families who are currently at CAME all seeking asylum were also shared.

“We are a family of two, my son and I,” one person wrote. “I am a single mother, separated a few years ago.The reason we are applying for asylum in the United States is that we lived in the state of Guerrero and were run out of the community by an armed group of people who were not from there. They captured some people from the town and threatened to kill all who lived there if we didn’t leave. As we were able, we fled, walking in the hills until we reached another town. We lost everything we had: house, fields and things that with difficulty I had bought. For this reason we arrived here in Agua Prieta, Sonora, with the hope they would grant us asylum in the United States and thus be able to move forward.”

“I am from the state of Guerrero and the (single) mother of three children,” another statement reads. “I left my town because it wasn’t safe and for fear of the threats of organized crime. In my town and in the whole state the situation is very bad, bad people control us, they want to rule us, they want us to work for them, they want us to do what they say. I am very afraid for my children, because those people don’t respect young children. They seek them out to arm them and, if the children refuse, they don’t look kindly on them. I am afraid to have my children continue growing up in a place where there is no peace, where they always live in fear. In my town there are two gangs that fight each other for territory. When they shoot at each other, we all are scared. They threaten us because supposedly we are on the side of their enemies. Every time they start shooting, they chase us, asking us to tell them where their rivals are hiding and, if we don’t, they will kill us. So, out of fear, I decided to leave my town. I have been waiting for seven months in the CAME shelter in Agua Prieta, because it is not possible to return to my town. I will be waiting until they reopen the border so I can request asylum from the United States authorities.”

“I am a single mother. My little son and I left our place of origin (Tabasco) alone,” another testimony reads. “Though I had built my home there with sacrifice and effort, we left for fear of organized crime, fear they would kidnap my son for trafficking in organs, living in fear of what would happen. In my house I had a little store and those from organized crime came to charge me for “protection,” saying that if I didn’t cooperate, if I didn’t work for them, I would be sorry. With the only things I had and with my son, without turning to anyone, I was forced to leave everything for fear of organized crime, which is taking control of everything. Since I left on February 24, 2020 because of these threats, we have been sheltering at the Exodus Center for Migrant Assistance (CAME). With no opportunity in our country, I take refuge here waiting for asylum in the United States. Here at CAME we are hoping that they will open the border soon so that we can be in a safe place.”