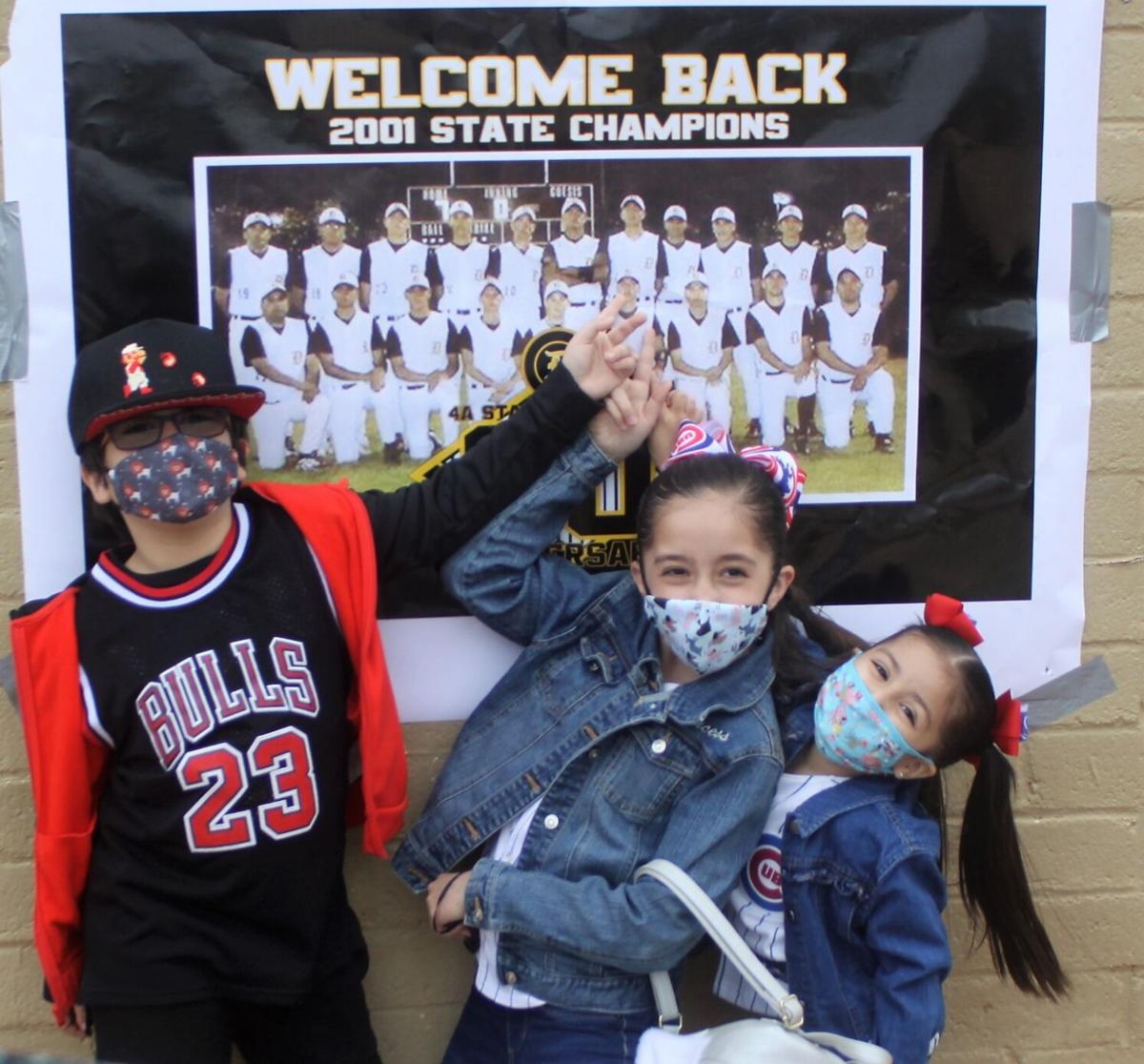 Evan, Anika and Arianna Davila proudly point to the spot where their dad, Manny Davila, is in the 2001 team photo of the Douglas Bulldogs state championship baseball team. 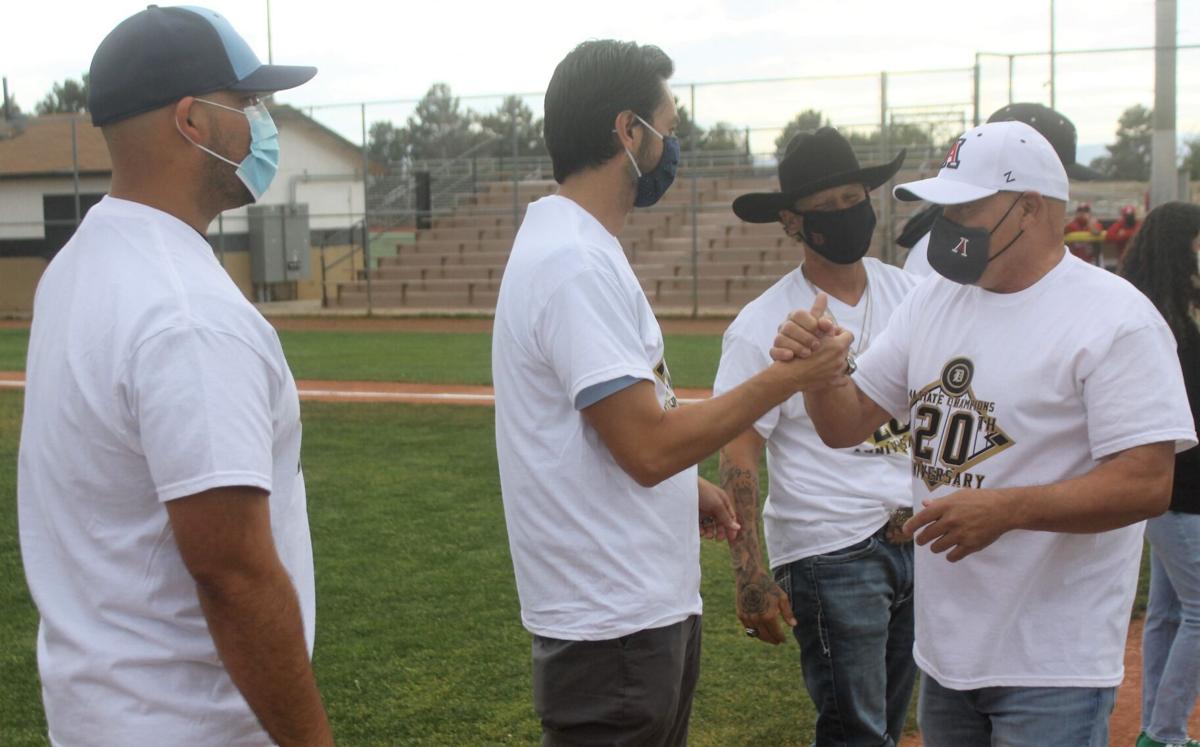 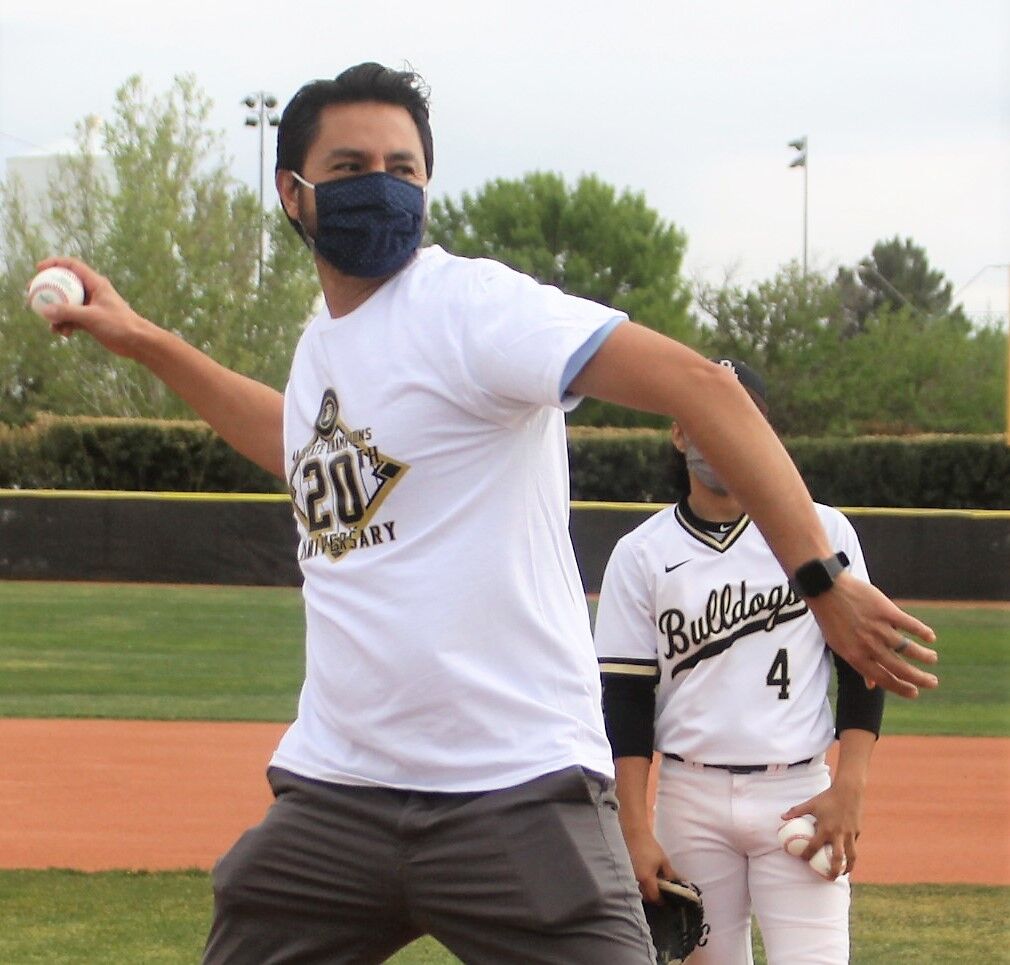 Luis Pedroza, the winning pitcher for Douglas on that state championship night, was asked to throw out the first pitch prior to the Bulldogs' game with Rio Rico Friday. 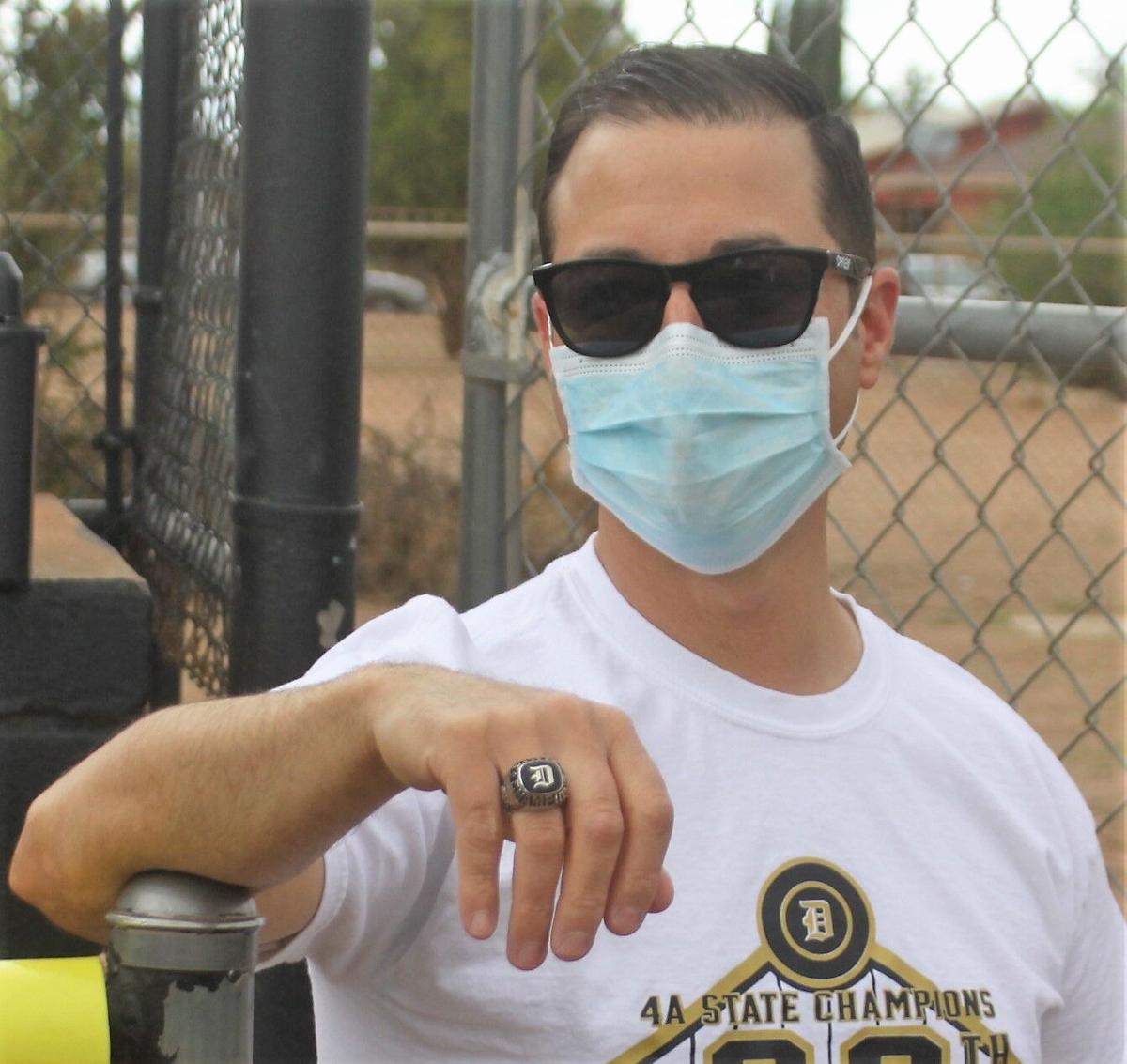 Evan, Anika and Arianna Davila proudly point to the spot where their dad, Manny Davila, is in the 2001 team photo of the Douglas Bulldogs state championship baseball team.

Luis Pedroza, the winning pitcher for Douglas on that state championship night, was asked to throw out the first pitch prior to the Bulldogs' game with Rio Rico Friday.

DOUGLAS — May 2001 was a special month for not only Douglas but also Cochise County.

Baseball teams from Bisbee and Willcox had won state championships that month and the Douglas Bulldogs were on the verge of doing something they hadn’t done since 1978, and that was to win a state championship in baseball, giving Cochise County state champions in the 2A, 3A, and 4A regions.

The Bulldogs were riding a 13-game winning streak going into the May 12 state championship with the Sahuaro Cougars, which was being played at Frank Sancet Field in Tucson, the same field Douglas’ baseball coach Jaime Tadeo had played on when he played for the University of Arizona when the Wildcats won the national championship in 1976.

Behind the gutsy performance of senior Luis Pedroza, who was on the mound throwing on two days rest, the Bulldogs shut out Sahuaro 7-0 finishing the year 21-7 and capping off a memorable season.

To this day Tadeo still remembers his pitching coach, Steve Ortiz, coming up to him nervously before the championship game after watching Pedroza warm up in the bullpen.

“‘Coach, I’ve got something important to tell you, he’s got nothing,’” Tadeo remembers him saying. “‘We’d better have some other pitchers warmed up because I don’t think he’s going to last too long.’ Luis then goes out and throws a gem.”

The Bulldogs pitcher, who is Douglas’ interim city manager, hurled a six-hit shutout at Sahuaro that night and twice got out of bases-loaded situations using a combination of pitches to strike out the side.

“I’ve got to hand it to Pedroza because he pitched with so much heart tonight,” Tadeo said in a May 15, 2001, championship game article that appeared in the Douglas Dispatch. “I knew he wasn’t feeling well, but he turned in a superb performance.”

Members of that 2001 state championship team were in Douglas Friday where they were recognized prior to the Bulldogs’ regional game with Rio Rico at Copper King Stadium.

As the players gathered prior to the recognition ceremony they reflected back on that special day and the journey they had all taken to get there.

“It’s hard to believe that it’s been 20 years,” said Eric Valenzuela, now a firefighter for the DFD. “It’s great being here and seeing everyone. There was something really special about that team. We all knew each other and had played baseball together since we were little. It was fun winning the state championship with all those guys; something I will never forget.”

Pedroza added seeing many of his former teammates Friday was very special.

“Seeing these guys today brought back all those great memories,” he said. “That was a fun team to be a part of. There was something special about it. We knew there were more talented teams out there but we had chemistry. It was such an amazing feeling 20 years ago. All those memories are rushing back right now.”

Pedroza admits he was caught off guard when Douglas Athletic Director Angel Ortega announced that he was going to throw the first pitch prior to the game with Rio Rico.

“The nerves never went away for me and that’s what helped me back when I was pitching here in high school,” he said. “Earlier today, I can’t lie, I was a little nervous that I might bounce it. Seeing everybody today, even though some of the guys from that team aren’t here, was great. I really appreciate them doing this. It’s very special to see everybody.”

Manny Davila hit 3-for-4 with a double and three RBIs in the game. He had the opportunity to play alongside his brother, Serge.

“Looking back, that was a special time for all of us, especially my parents.” he said. “ I think as we get older we appreciate what we did even more. Today we are here with our kids, being recognized. This is great. I really enjoyed seeing everyone today.”

Five weeks prior to the state championship game the Bulldogs were 7-7 and trailing Marana 9-2 before rallying to win the game in the eighth 10-9.

“Our season was at a crossroads,” Tadeo said in the 2001 Douglas Dispatch article. “These kids had to decide how they were going to salvage the season. I don’t think a state championship was on anyone’s mind at that time. We were just trying to figure out how we were going to finish the season.”

Slowly the Bulldogs began to gain momentum and the win streak began to grow.

“In the first round of the state tournament the Bulldogs had a dramatic come from behind win over Mingus at Copper King Stadium,” the Dispatch article reads. “They then had to rally from a four-run deficit to beat Greenway 9-7 in 12 innings in the state semifinals which ended a little before midnight. Less than 24-hours later the Bulldogs were back on the field facing the Sahuaro Cougars in the biggest game of the year.”

Coach Tadeo said after Friday’s ceremony all the memories of that special night came rushing back when he saw his players.

“We had a rough game the night before, got home late and the next day we were back on the bus heading to Tucson to play for the state championship,” he said. “On the ride to the game you could feel the confidence from these guys. They knew even before they stepped on the field, they were going to beat Sahuaro. We had already beaten them four times before that season.”

The former coach said for years he had watched his players play ball together in the local leagues and saw what kind of potential was there, but for him one of the more special moments of the state championship game came on the final out when his son, Marquez, caught the ball in center field.

Tadeo takes pride in seeing how many players from that team went on to play collegiate baseball and how some of them are now coaching the current Bulldogs team.

Prior to the game Tadeo stressed the importance of the chemistry that 2001 team had and encouraged the current Bulldog players to find that chemistry and if they do, “good things will happen.”

The coach also made it a point to thank former DUSD Superintendent Jesus Greer and business manager Donnie Huish for providing the facilities for the team to practice, improve and bring home the state championship.

“They provided us with the facilities we needed to help these kids develop,” Tadeo said. “Without these facilities none of this would have been possible.”