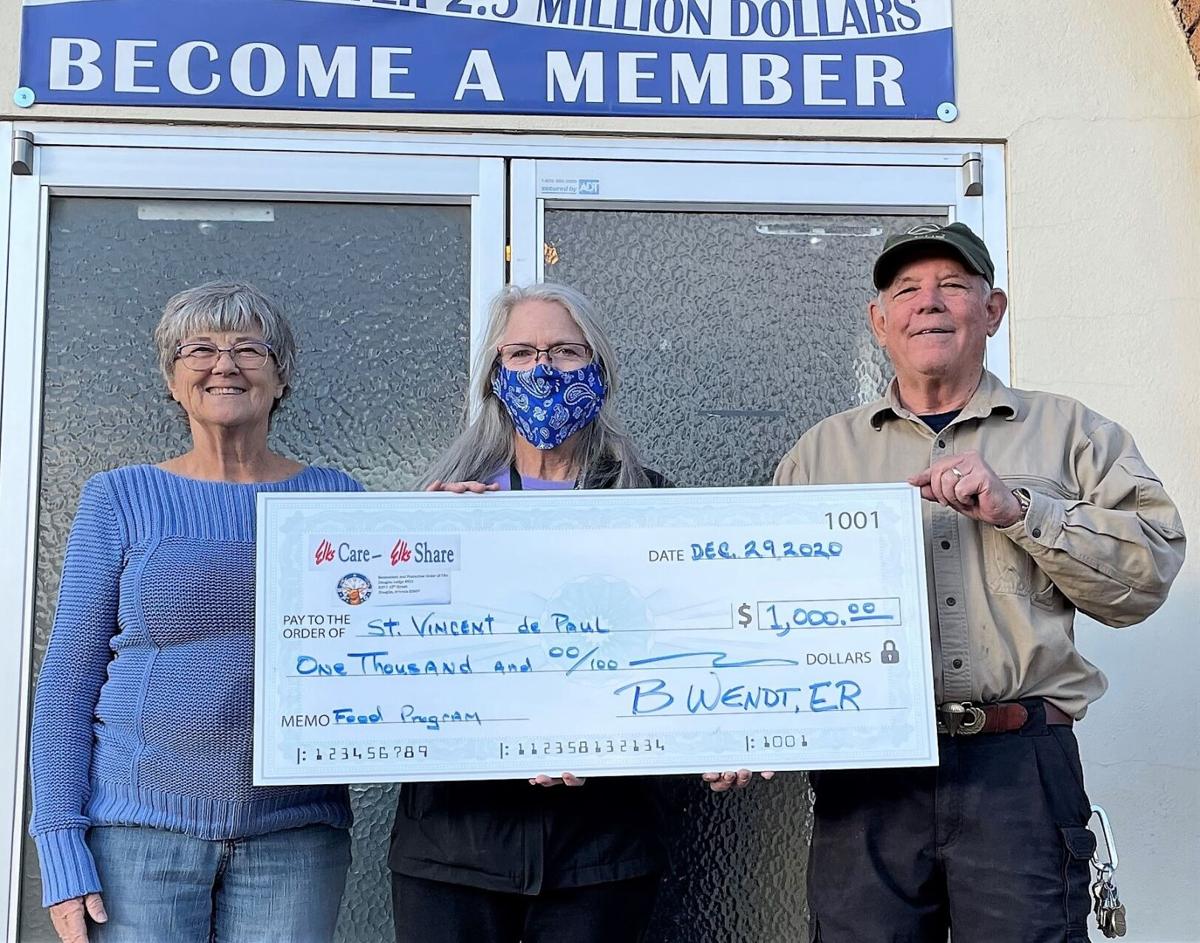 Debra and Bill Wendt with the Douglas Elks Lodge on 10th Street recently presented the St. Vincent de Paul in Douglas with a check for $1,000. 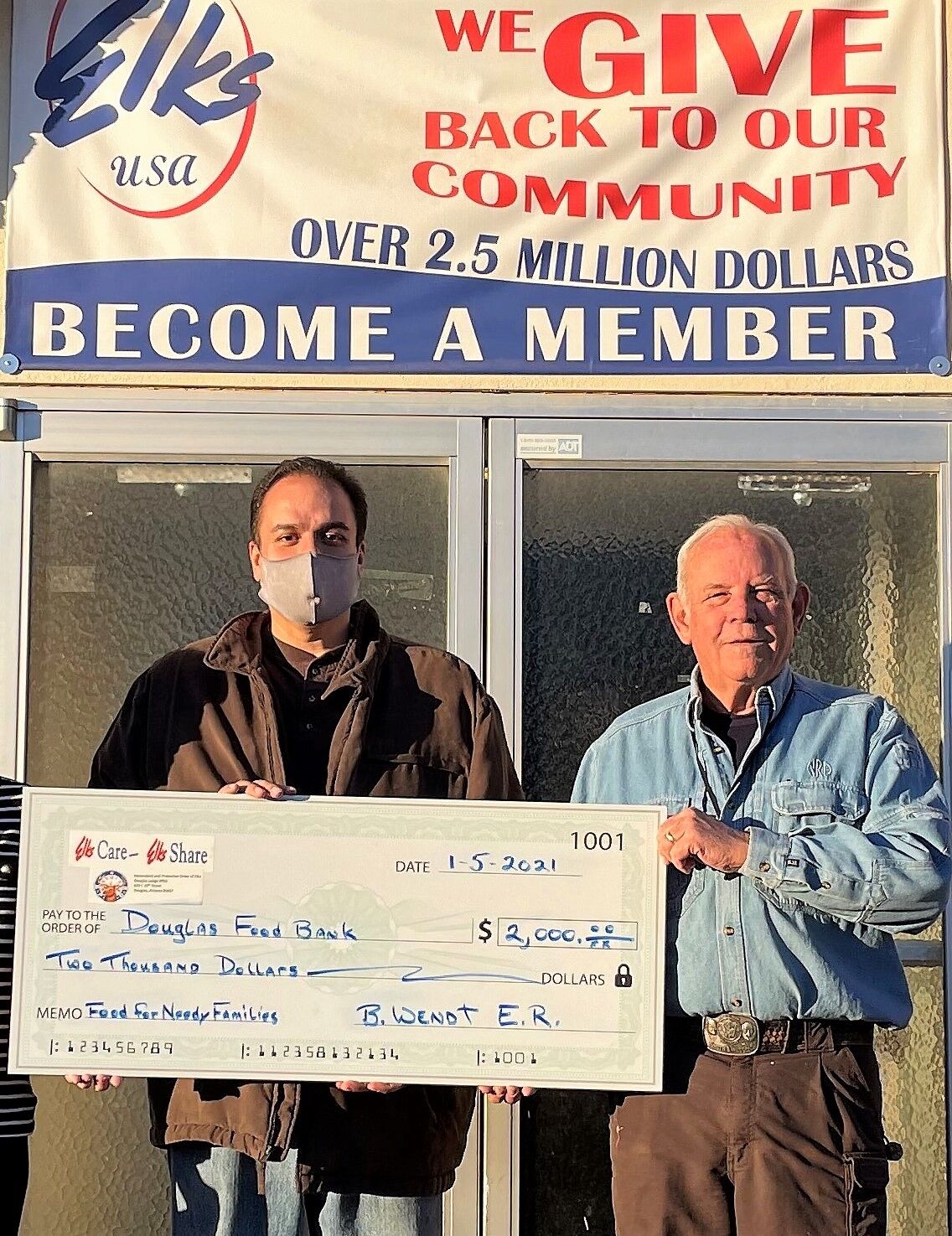 Debra and Bill Wendt with the Douglas Elks Lodge on 10th Street recently presented the St. Vincent de Paul in Douglas with a check for $1,000.

DOUGLAS — The Douglas Elks Lodge on 10th Street has done its best to make the best of a tough situation in 2020.

According to Buddy Willams, the past exalted ruler for the Douglas Elks, after starting the fiscal year on April 1, the entire state of Arizona was essentially shut down for the month. When operations resumed in May, the small core of officers and members from the local lodge came back to open the lodge on 10th Street and begin their charitable planning.

“With new guidelines and restrictions to operate by, and the threat of an immediate closing without notice, the Elks started to work on its fundraising efforts for the Arizona Elks Major Projects, which mostly benefits the Steele Children’s Research Center in Tucson,” Williams said. “Asking the lodges to raise at least $10 per member, the Douglas Elks almost hit $40 per member. Most of the funds came from the sale of tickets for a quad and trailer that the major projects raffle every year.”

Williams stated the local lodge closed twice, each time for two weeks during the pandemic, both self-imposed and each time with negative results.

“But with two months lost to COVID related closing, the Elks’ attention turned to the winter fundraising events,” Williams said. “Without any new guidelines for shopping sprees and food basket delivery, funds were raised for both events through a successful golf tournament and donations from members. Waiting for instructions was next.”

Williams noted the annual Douglas Elks Clothe-a-Child Shopping Spree was adjusted due to social distancing and Elks members instead shopped without the children.

“Fifteen children received $100 worth of clothes, jacket, pajamas and a toy from the masked Elks delivering to the homes,” Williams said. “The Food Basket program was trickier. Normally, up to 50 families would receive two boxes of food on Christmas Eve. With food and cash donations slowly arriving at the lodge and only a few members to help, the Elks instead gave $1,000 to St. Vincent de Paul for their daily lunch program. Then came an opportunity to help even more people.”

The Douglas Elks applied for a Spotlight Grant from the Elks National Foundation and was rewarded with $2,000, which was then presented to the Douglas Area Food Bank along with any food donations the lodge had received in the process.

“The Elks National Foundation awards more student scholarships annually than any other entity except for the U.S. government,” Williams said. “The lodge was also able to host two blood drives, the only Red Cross events held in Douglas since the start of COVID-19. In seven months, volunteers logged over 1,800 hours and raised over $12,000 in donations. Some volunteered more than they were actually able to work at their jobs.”

Bill Wendt, the current Exalted Ruler for the Douglas Elks, was only too happy to present the checks under the banner that shows the Douglas Lodge has given more than $2.5 million to the community during its 115-year existence.

After a difficult and challenging year, Wendt pointed out that the few volunteers exemplified the national motto of the Order, “Elks Care, Elks Share.”