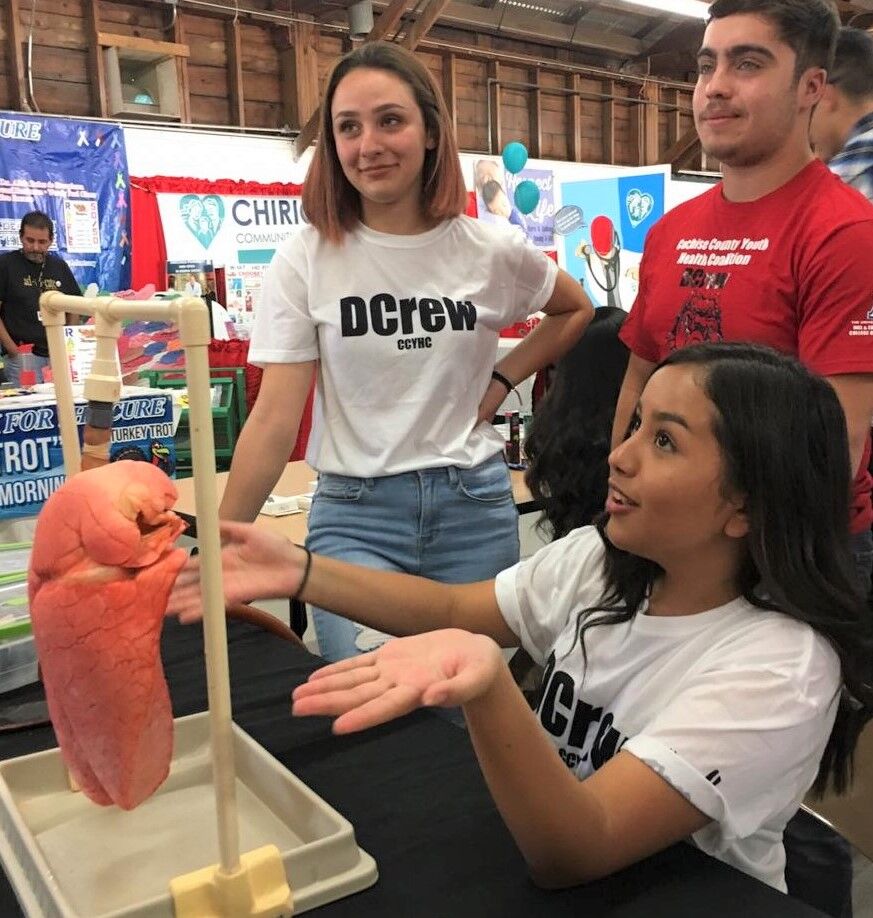 Pamela Duarte, Douglas’ latest National Youth Ambassador, shows the effects tobacco can have on the lungs of a human body at the Cochise County Fair.

Pamela Duarte, shown above with some of her Cochise County Youth Health Coalition members who hosted a Mayoral Forum for the four candidates running for mayor of Douglas earlier this year. 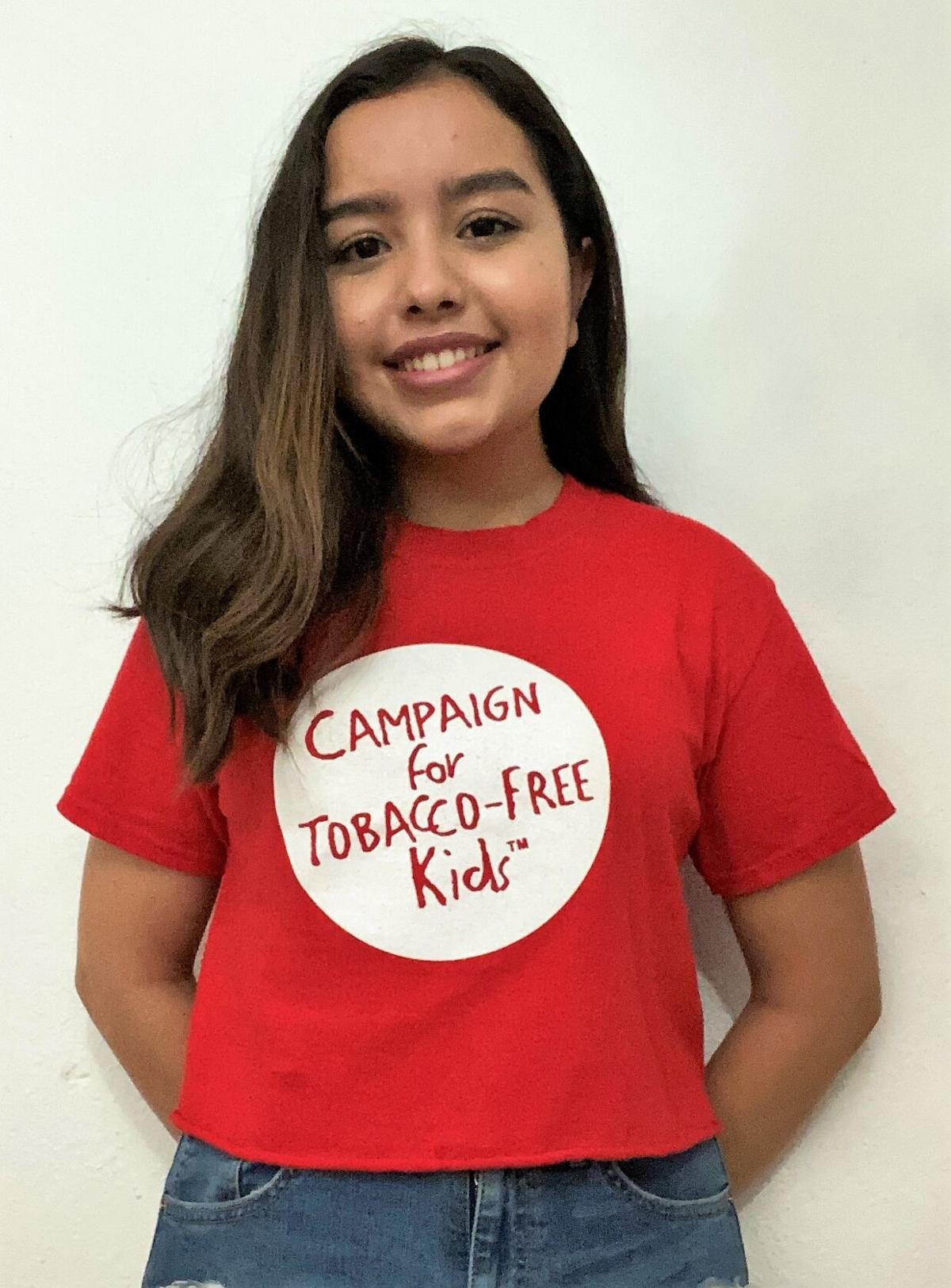 Pamela Duarte, Douglas’ latest National Youth Ambassador, shows the effects tobacco can have on the lungs of a human body at the Cochise County Fair.

Pamela Duarte, shown above with some of her Cochise County Youth Health Coalition members who hosted a Mayoral Forum for the four candidates running for mayor of Douglas earlier this year.

DOUGLAS — A Douglas teenager is one of 10 Arizona students to have been selected to serve on the National Youth and Young Adult Ambassadors by the Campaign for Tobacco-Free Kids for demonstrating leadership in fighting tobacco use in their communities.

Pamela Duarte, 17, a senior at Douglas High School and the daughter of Pablo and Pamela Duarte, is the lone Cochise County representative to be selected to serve on the committee.

Duarte has been involved in tobacco control and prevention for three years, through the Cochise County Youth Health Coalition (also known as DCrew). As an Ambassador, Pamela hopes to build on her strong experience working within her community to educate others on the harms of tobacco, and take her advocacy to the next level by informing decision-makers at the state and federal levels.

“I’m extremely honored to have been chosen to represent my community in this capacity,” Duarte said. “One thing I’ve learned from working with the local youth health coalition, and one my uncle and my advisors taught me, was to always help make the community better by giving back in some capacity.”

Pamela becomes the second member of the family to be selected to serve as a National Youth Ambassador. In 2016 her cousin Alex Duarte served on the same committee.

“We’re not so much anti-smoker but rather anti-agency,” she said.”One thing I’ve learned since joining DCrew is how the industry targets the youth with the various flavors. They don’t care about the health effects. Once I entered high school I began to see how it affected the youth around me. After seeing that, that drove me to want to teach them about the dangers and to be healthier and not fall into the traps they set. I have friends and family members who smoke and that drives me even more.”

Duarte was recently part of the local coalition that persuaded the Douglas City Council to increase the age to purchase tobacco products from 18 to 21.

The summer of 2019 she was able to attend the Truth Initiative Leadership Conference in Los Angeles where she says she learned a lot more about her advocacy.

According to a press release, Duarte were among 133 youth and young adults from 33 states who participated in the Campaign for Tobacco-Free Kids’ Digital Advocacy Symposium, a five-day online training session focused on building advocacy, communications and leadership skills.

Her cousin Alex however was fortunate enough to make a trip to Washington, D.C. for a five-day event where they received specialized in-person training from experts in their field on how to take their advocacy to the state, national and international levels. Duarte and the other NYA’s will also brainstorm new ideas while getting to explore the nation’s capital.

“I do want to continue my work especially locally,” Pamela said. “I hope to continue to push the message forward and when this all ends I will reconnect with D-Crew and continue to push forward with our campaign and most importantly just educate on the dangers of the tobacco products.”

The Youth and Young Adult Ambassadors will work with the Campaign for Tobacco-Free Kids to advocate for effective policies to reduce youth tobacco use at the federal, state and local levels. These policies include ending the sale of all flavored tobacco products, including flavored e-cigarettes that are addicting a new generation of kids.

“We are thrilled to welcome this new class of Youth and Young Adult Ambassadors, whose passion and leadership will help us create the first tobacco-free generation,” Matthew L. Myers, President of the Campaign for Tobacco-Free Kids, said in the release. “Young people are critical voices in the fight against tobacco because they speak from experience about how they are targeted by the tobacco industry. Policymakers should listen and support strong policies to protect our kids, including a prohibition on all flavored tobacco products.”

“My goal is to work hard to make Douglas a little healthier while sharing my message,” Duarte said.