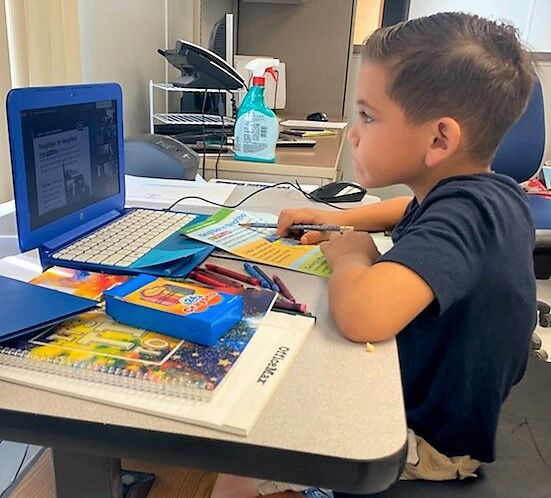 Fabian Valenzuela, a first grader at Faras Elementary, sits at his laptop and does his school work the first day of school. 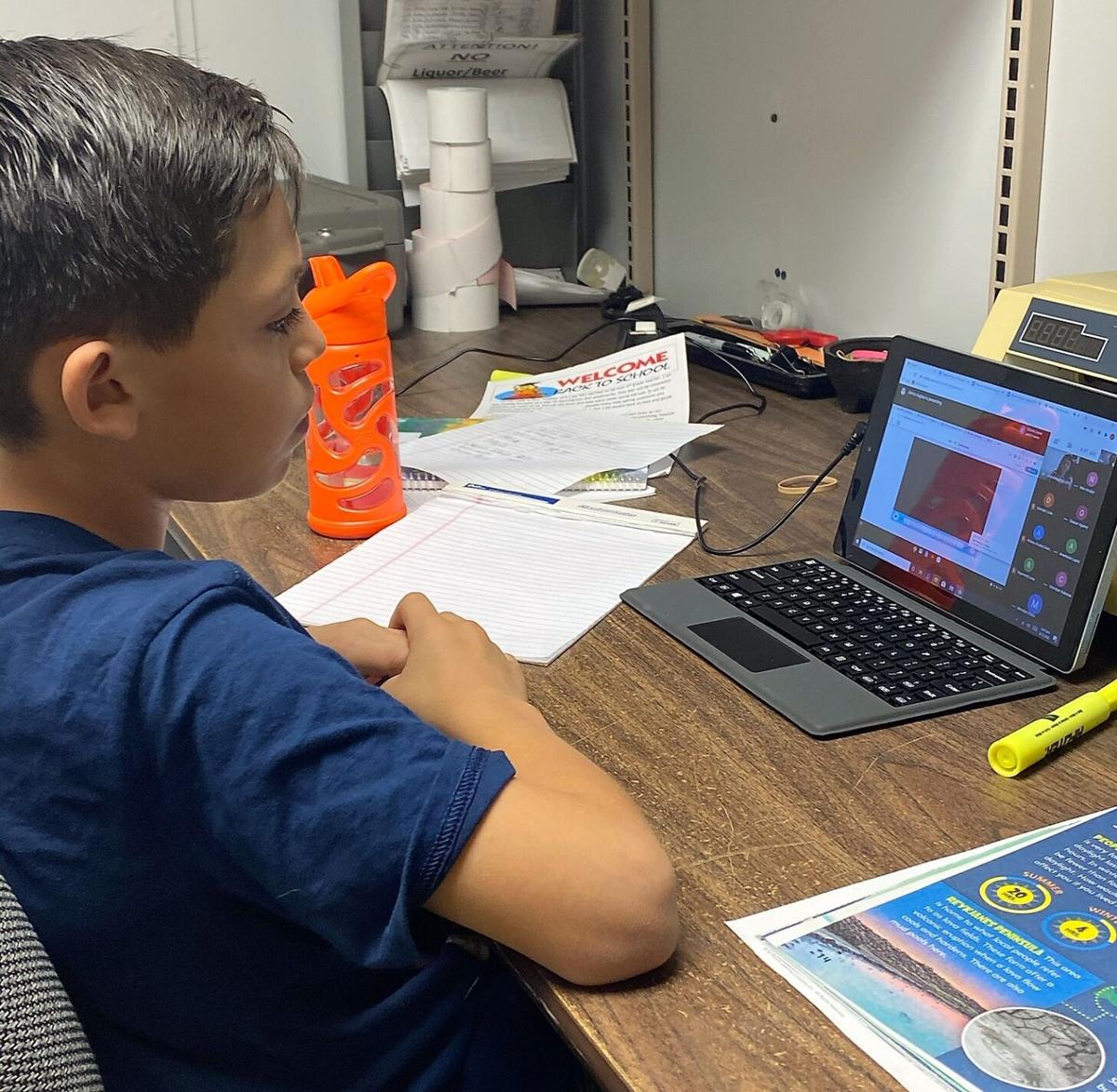 Dylan Valenzuela sits at his computer at his mom's place of work and does his school work Monday. 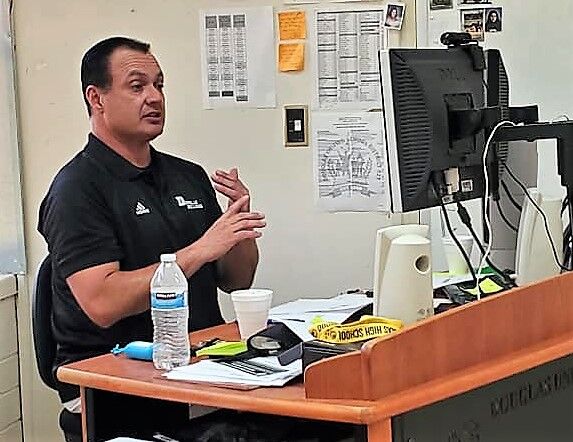 Gilbert Aguilar teaches one of his CTE classes at DHS remotely on Monday. 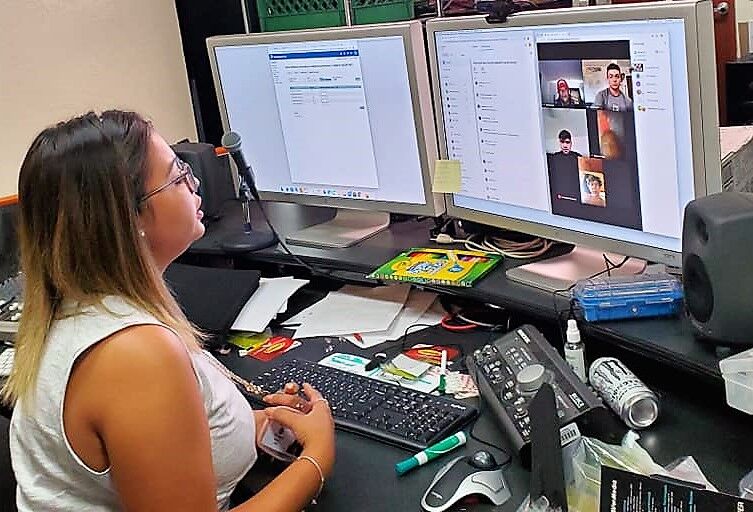 Fabian Valenzuela, a first grader at Faras Elementary, sits at his laptop and does his school work the first day of school.

Dylan Valenzuela sits at his computer at his mom's place of work and does his school work Monday.

Gilbert Aguilar teaches one of his CTE classes at DHS remotely on Monday.

DOUGLAS — Students in the Douglas Unified School District began school on Monday in a manner many of them probably hadn’t imagined.

With the COVID-19 precautions in place, some families chose to send their children to school where they were placed in social distancing learning centers while others had them virtual learning from home.

Some parents expressed frustration on social media over the inability to log in to their programs while another said she had one computer for four children and wasn’t sure how she was going to do it.

Dominique “Nikki” Valenzuela and her husband Eric both work. She is the manager at the Cochise County Fairgrounds; Eric is a firefighter for the Douglas Fire Department.

When Nikki went to work on Monday she took her three sons, Harlan, who is kindergarten, Fabian, a first grader and Dylan, who is in fourth grade at Faras Elementary in Pirtleville, and their computers and other school supplies with her. She set up work stations for her boys and while they learned, she was able to do her job, always ready to assist them if needed.

“The beginning was hectic but then things settled down and it went okay,” she said of the virtual learning. “Each of my boys have their own laptop and once we got them set up and class began it went smoothly. It went a lot better than I thought it would.”

Nikki said her youngest was on the computer for about three and a half hours while the other two were on for four hours.

“The teachers did a good job explaining to them how to use Google Classroom,” she said. “My hats off to the teachers, they did a heck of a job.”

Valenzuela says while she would prefer in person learning for her sons she is okay with virtual for the time being, based on what she experienced the first day.

“The kids have homework, they seem to understand what they’re doing, it’s just a different scenario and a different setting but they sat there and did everything they needed to do,” she said. “What’s nice about Google Classroom is that you have all the assignments, all the deadlines so you know what needs to be done and when.”

Valenezuela said the teachers are doing their teaching and have the kids engaged. She added one of her son’s teachers caught him not paying attention and proceeded to get his attention.

“It wasn’t a headache the way I thought it would be,” Nikki said. “The teachers did their job and they taught. My kids sat there and did their work. I am pleasantly shocked to say the least. I thought it was going to be a mess.”

Eric Quijada was another parent who had his son Drake, a seventh grader at Paul Huber Middle School and Emily, a second grade student at Clawson Elementary, at home virtually learning.

“At first it was a struggle trying to figure out the passwords and usernames but once we got going it was okay,” Eric said. “I thought the teachers did the best they could considering the circumstances. They did a presentation video at the start so each kid would know what to expect. It was pretty much like being in the classroom except that it was online.”

Quijada said his son was done with his classwork in a little over three hours while his daughter was on for about four. He said as long as the COVID-19 restrictions are in place he’s okay with the virtual learning.

Andrea Barallardos, a science teacher at DHS said she was mentally exhausted after the first day.

“I feel that a lot of students were pretty confused by the schedule but that should smooth out by the end of the week,” she said. “Going to online instruction took a lot of planning. I find it difficult to be online with students on Google Meet all day while having a full online curriculum running concurrently. But it is my goal to give the highest quality education I can even with the current challenges.”

“I have no idea but I can say that the high school is committed to doing our best for our students and we know we are all learning together in this new platform of teaching and learning,” Barallardos said. “Time will tell of its effectiveness.“

“I was surprised how well the freshmen have adapted to this platform,” he said. “I have used google classroom for several years and my upper classes are well versed on this teaching method.”

Aguilar said his students had some minor glitches with their computer camera or microphone but they were able to log into Google Meets for live instruction with little difficulty.

“This new platform of teaching of course can’t replace the interaction with in person instruction,” he said. “ However, DUSD has provided great technical in service workshops these past few weeks to effectively communicate with our students. In addition, the teachers are passionate to teach and will be able to effectively convey their lesson to the students. Making virtual learning or distance learning work for all students is a challenge. Parents should be reassured that the entire DUSD District has placed the best tools and resources to get this done.”

Attempts to reach DUSD Superintendent Ana Samaniego for her thoughts on the first day or find out how many students showed up to school versus staying home for online instruction, were unsuccessful.