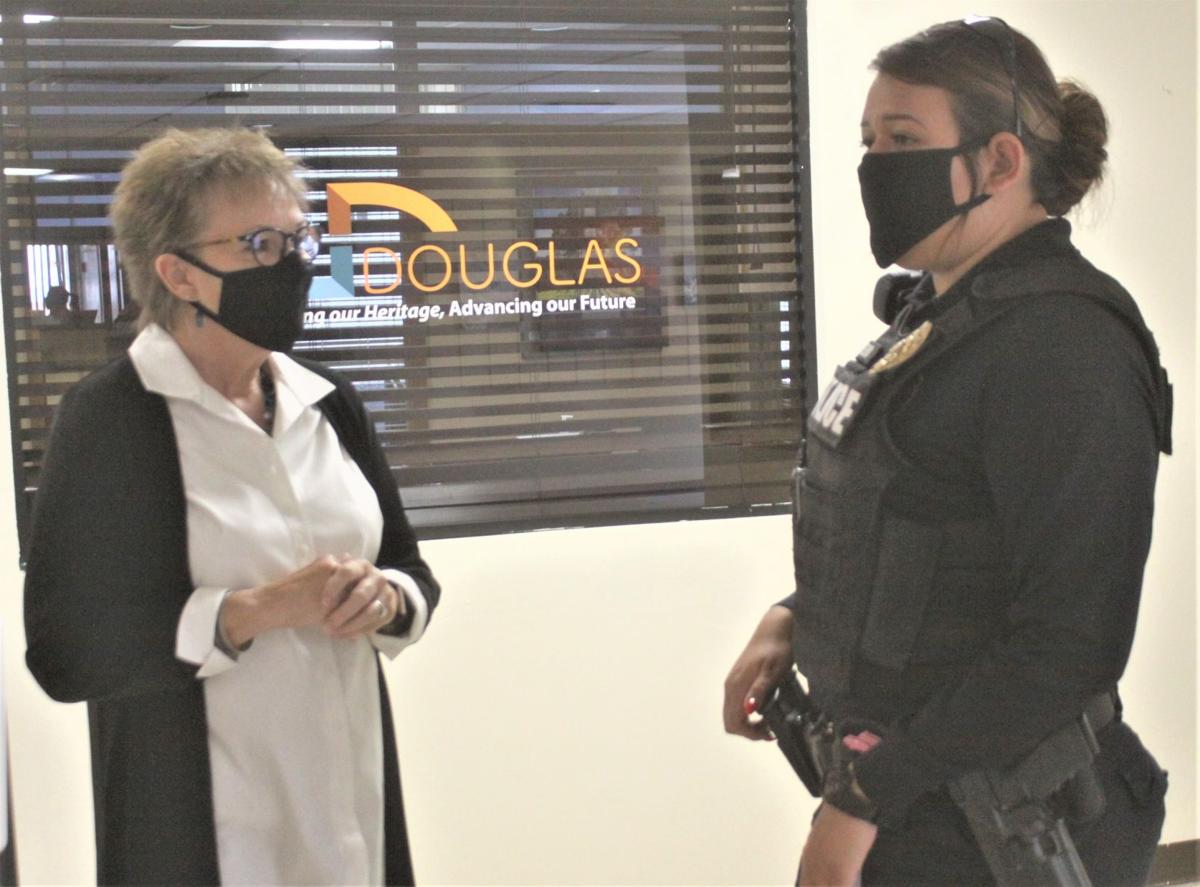 Douglas City Manager Jerene Watson talks with DPD officer Vanessa Romero prior to the start of the special city council meeting Monday where face coverings for Douglas residents was discussed. 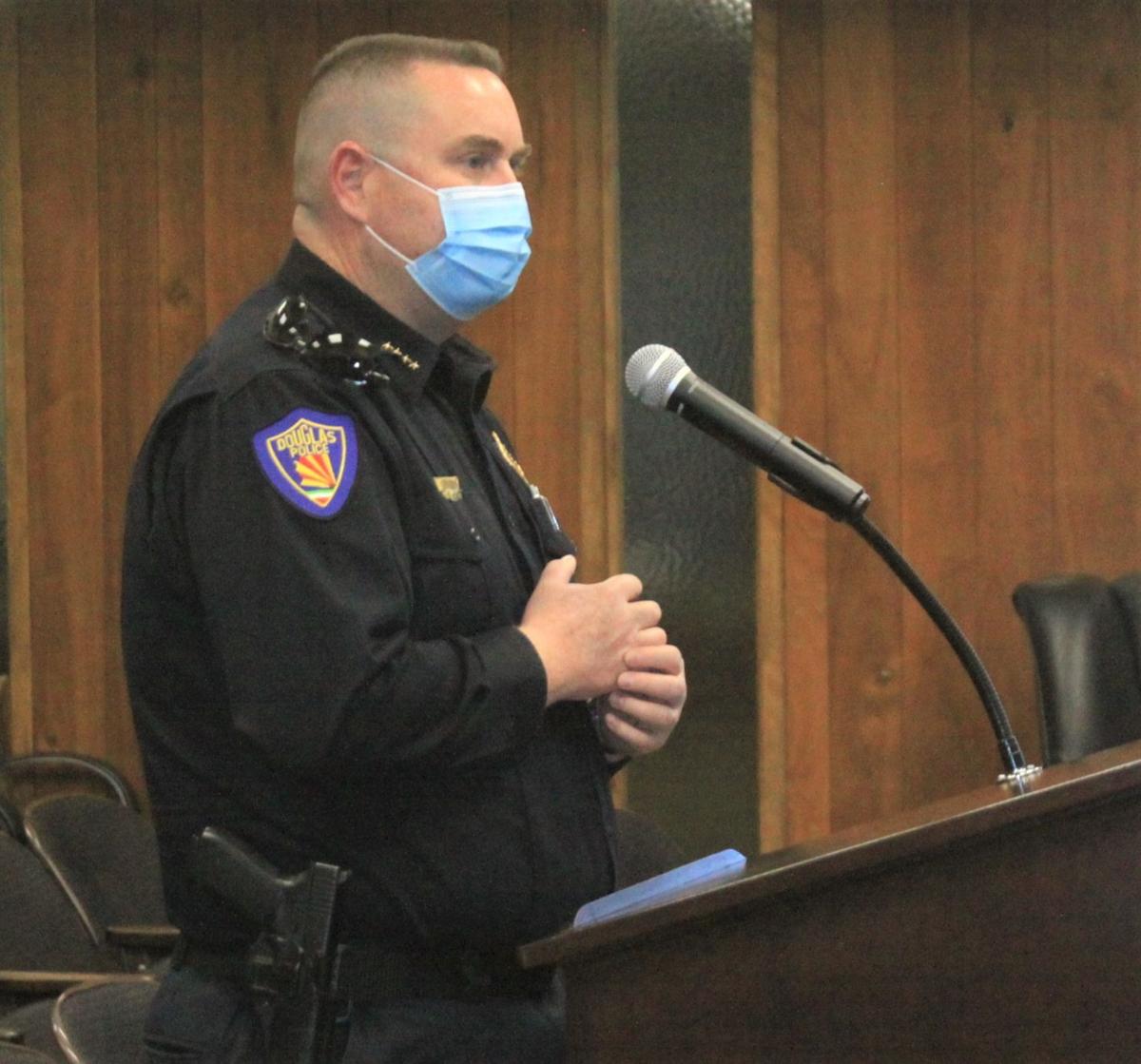 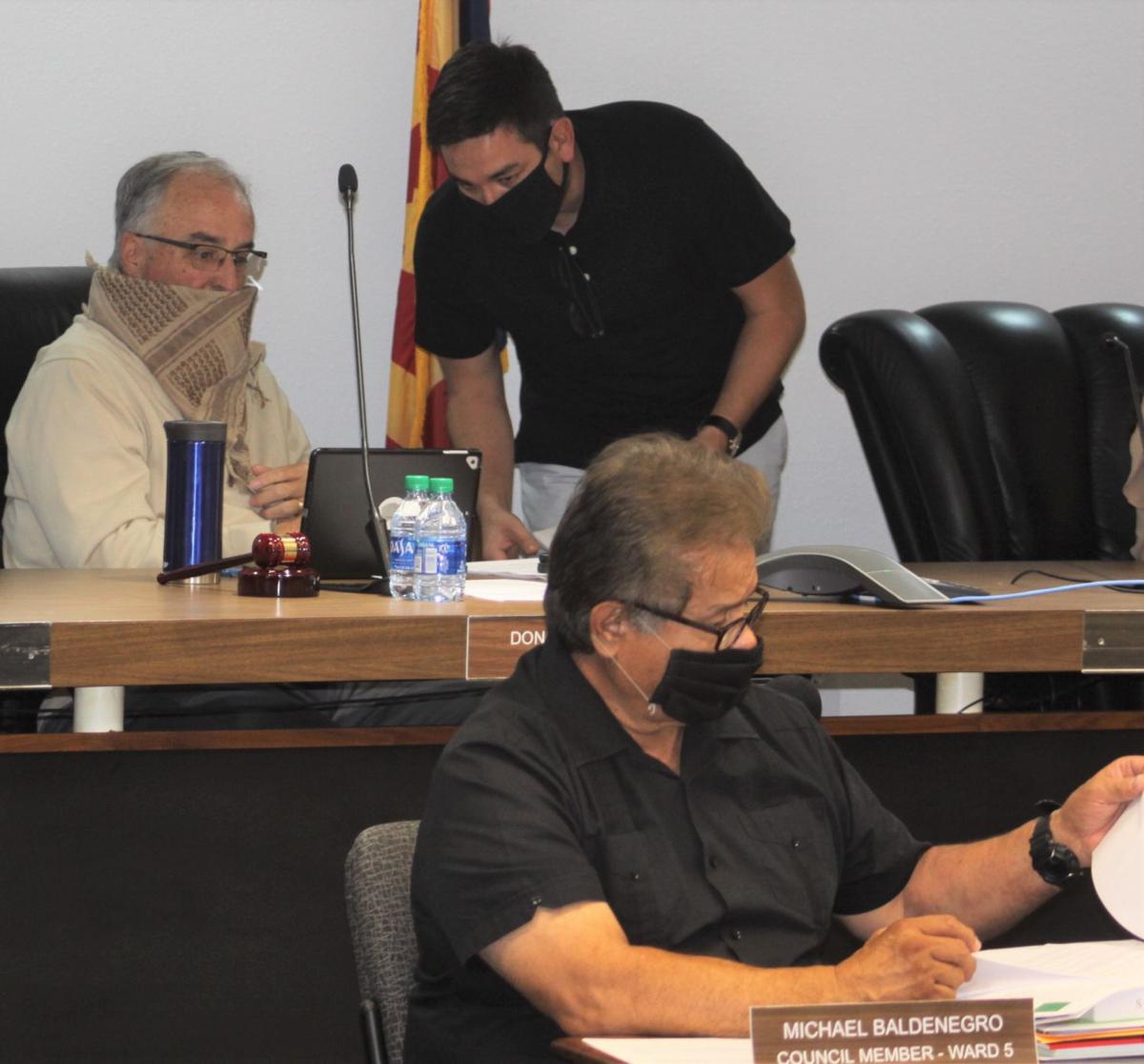 Douglas City Manager Jerene Watson talks with DPD officer Vanessa Romero prior to the start of the special city council meeting Monday where face coverings for Douglas residents was discussed.

DOUGLAS — Anyone above the age of 6, who is out in public and inside city limits, will now be required to wear a face cover or risk a possible fine of up to $50.

At a special meeting Monday night, the Douglas City Council spent over an hour discussing the wearing of face coverings that became an executive order June 17 when Governor Doug Ducey signed the executive order allowing local governments, based on conditions in their jurisdiction, to adopt policies regarding the wearing of face coverings in public for the purpose of mitigating the spread of COVID-19.

The emergency proclamation was approved by the city council 6-1 with Mayor Donald Huish casting the lone dissenting vote.

“The surge is here. We have over half of the COVID-19 cases in Cochise County,” he said. “Wearing a mask protects everybody.”

Several emails from local residents, in addition to a petition that had 1,339 signatures on it, were also presented to the city council encouraging them to take some kind of proactive action.

The proclamation that was passed states all individuals, with the exemption of those outlined further below, shall wear a face covering while in public within city limits.

Some of the exceptions are: when in a public setting where continuous physical distancing is difficult or impossible. Businesses whose employees interact with the public must require employees to wear face coverings.

“Public Setting” means indoor spaces that are accessible to the public such as grocery stores, retail stores, pharmacies and health care facilities, restaurants and bars, gyms and similar facilities, government building and any other spaces where the public is allowed to enter.

Outdoor public spaces where people congregate, including but not limited to areas where persons stand in lines for entering an establishment.

In or on public transportation such as a bus or other public transit vehicle, a taxi or ride-sharing vehicle or at a transit stop waiting area.

“Physical Distancing” means keeping six feet of distance between individual persons who are not of the same household.

Face coverings are not required: when at home; when alone in a vehicle or in the vehicle only with people you live with; when eating at a restaurant; when exercising outdoors alone or with people you live with; when in settings where it is not practicable or feasible to wear face covering, such as when receiving dental services, medical treatments or while swimming, and in workspaces not open to the public. [It is recommended in nonpublic workspaces face coverings be worn as recommended or required by the Arizona Division of Occupational Safety and Health (ADOSH)].

Enforcement of this proclamation shall focus on education and providing guidance issued by the Arizona Department of Health Services, in order to promote the health and safety of the Douglas residents as well as further contain the spread of COVID-19. Before any enforcement action is taken to enforce this order under Article XIV, Section 6 of the Douglas City Charter, that shall be limited to a civil penalty not exceeding $50 a person shall be notified and given an opportunity to comply prior to being cited and citation should only occur where the person in violation demonstrates an intentional disregard for and refusal to comply with the imposed requirement.

During a break at the meeting Mayor Huish explained his “no’ vote on the proclamation.

“I believe it’s the rights and freedoms of individuals to choose is important in the fact that we should be given an opportunity to do what’s right,” he said. “I wanted everybody in Douglas to have an opportunity to do what’s right rather than be forced into it. I believe you teach people proper principals and allow them to govern themselves. I don’t think it’s the government’s business to tell them what they can and cannot do in those situations.”

Huish added he fully understands what’s going on and he respects the council’s words.

“I’ve heard what the community said,” he stated. “Therefore they will have an emergency proclamation. This proclamation is for those people we don’t know, that may or may not be ill. This is basically an effort to try and slow the increase that’s going on in Douglas right now with COVID-19.”

Huish added the proclamation will be addressed every two weeks rescinding when the COVID-19 numbers decrease.

“Primarily its a matter of having the staff respond to the calls for service in dealing with those that are either ignorant to the passing of the proclamation as well as educating them in the expectations going forward,” he said. “Part of the challenge with that is there are residents in our community who live here as well as come in to visit that may be exempt under the requirements of the proclamation such as having an underlying health condition or other matter that doesn’t allow them wear a mask and be restricted. Us in law enforcement don’t have the authority to ask for proof of that underlying condition or circumstance that prevents them from wearing it so anyone that tells us they have an underlying condition we’re basically going to have to take their word for it.”

The chief says he sees this as a challenge for his officers especially with the Fourth of July just around the corner.

“Part of the reason we are here tonight is because of our efforts to try and educate the public and to self regulate and wear their masks,” he said. “Some, either through negligence or indifference or just lack of knowledge have made the conscious or unconscious decision not to comply. In doing that they are putting not only themselves at risk but also others around them at risk.”

Latest numbers released Tuesday by the Cochise County Health Department show there are 435 coronavirus cases in Cochise County, 257 of which are still active and 151 of which are in the Douglas zip code. So far six people have died from the disease. County officials refused to state how many of those deaths were from Douglas.