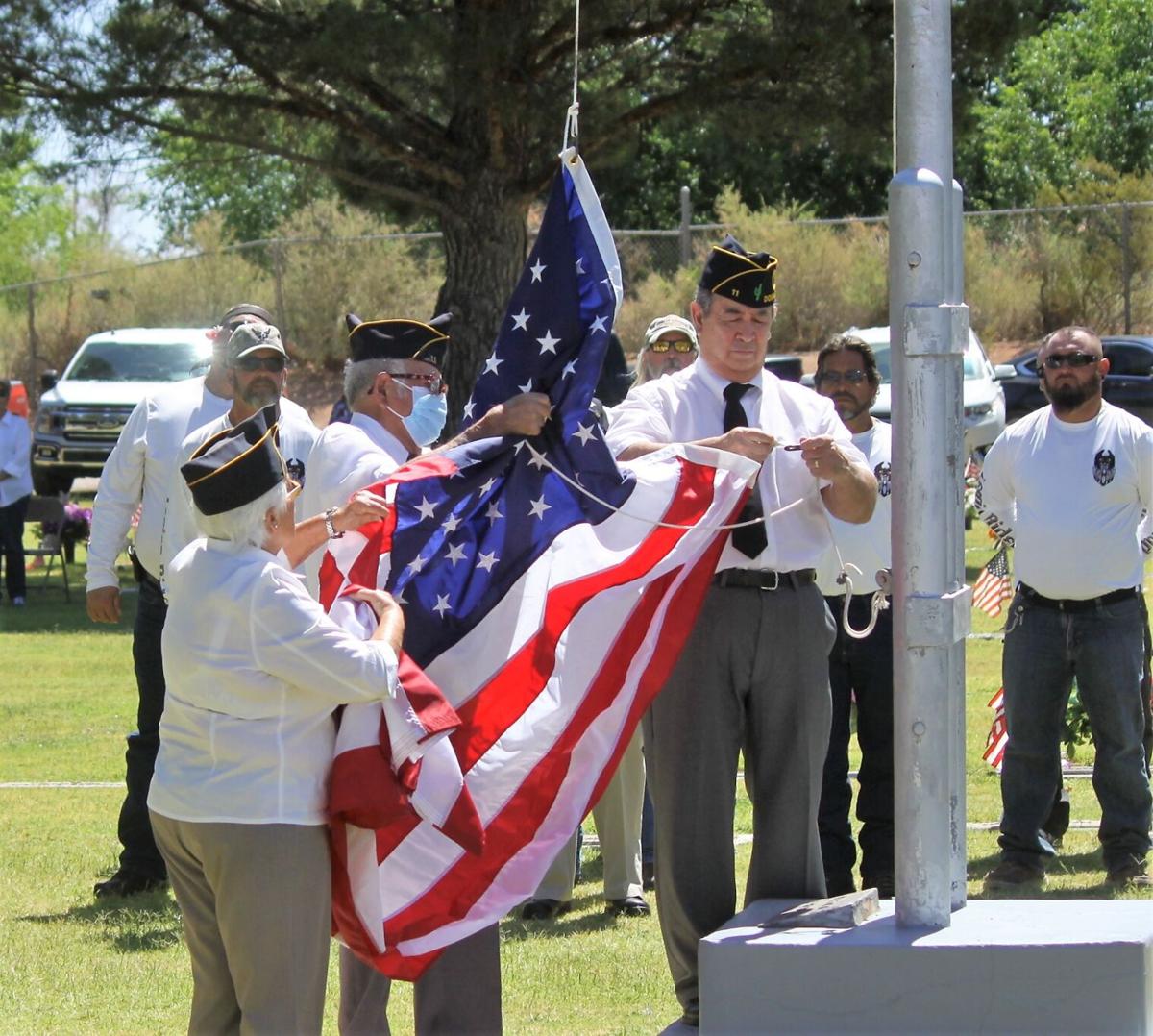 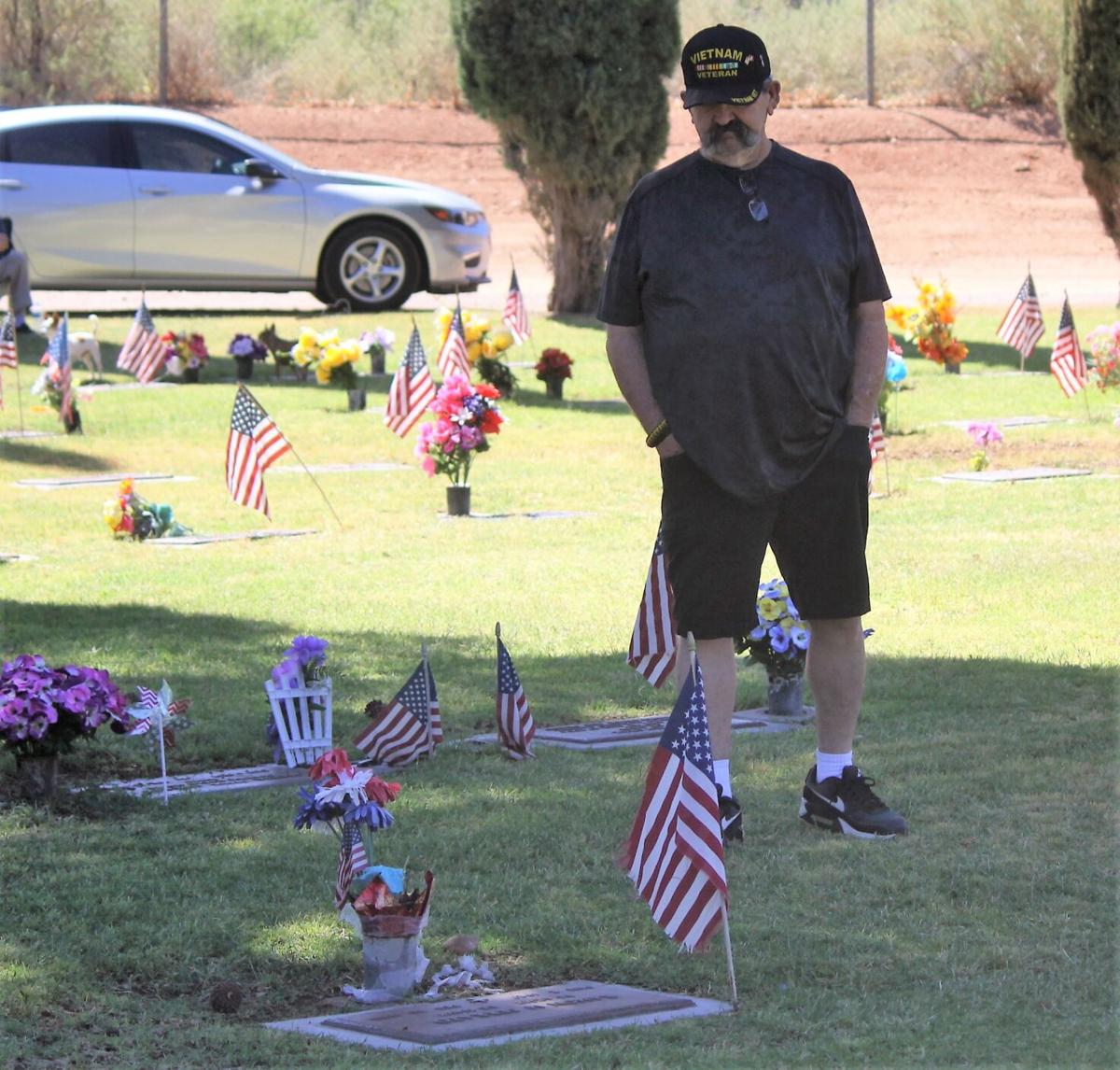 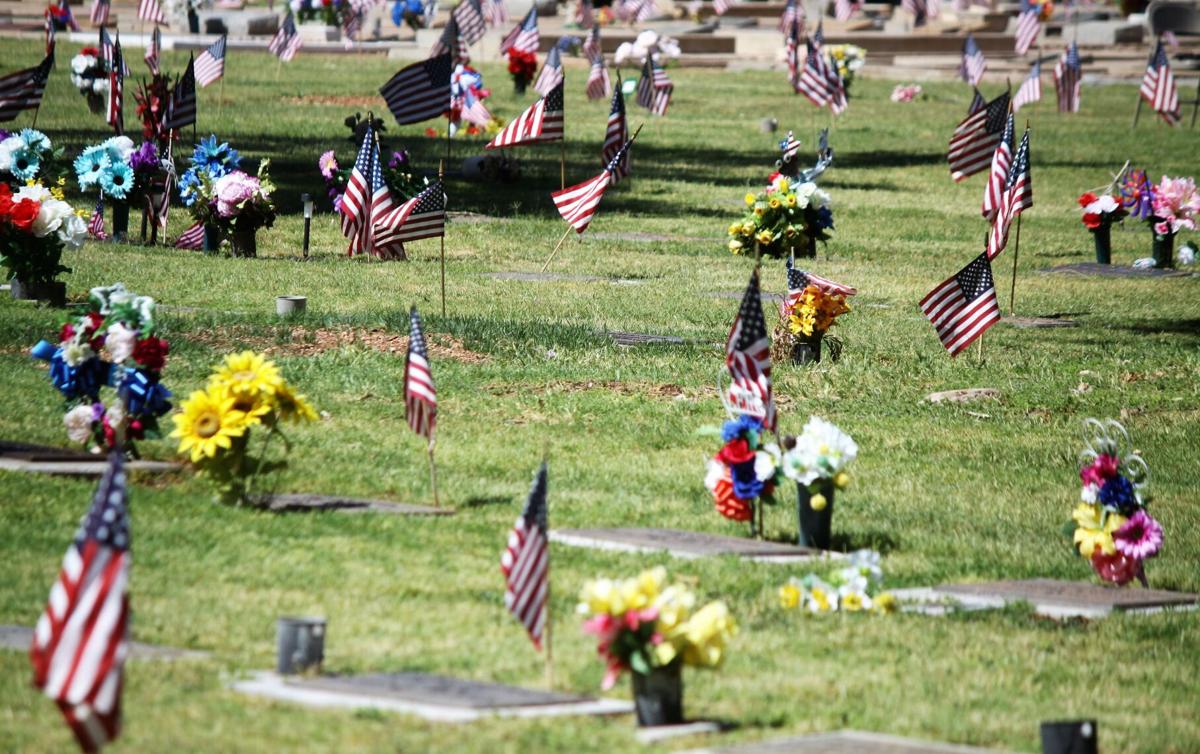 Hundreds of flags could be seen on various graves throughout Calvary Cemetery Monday. 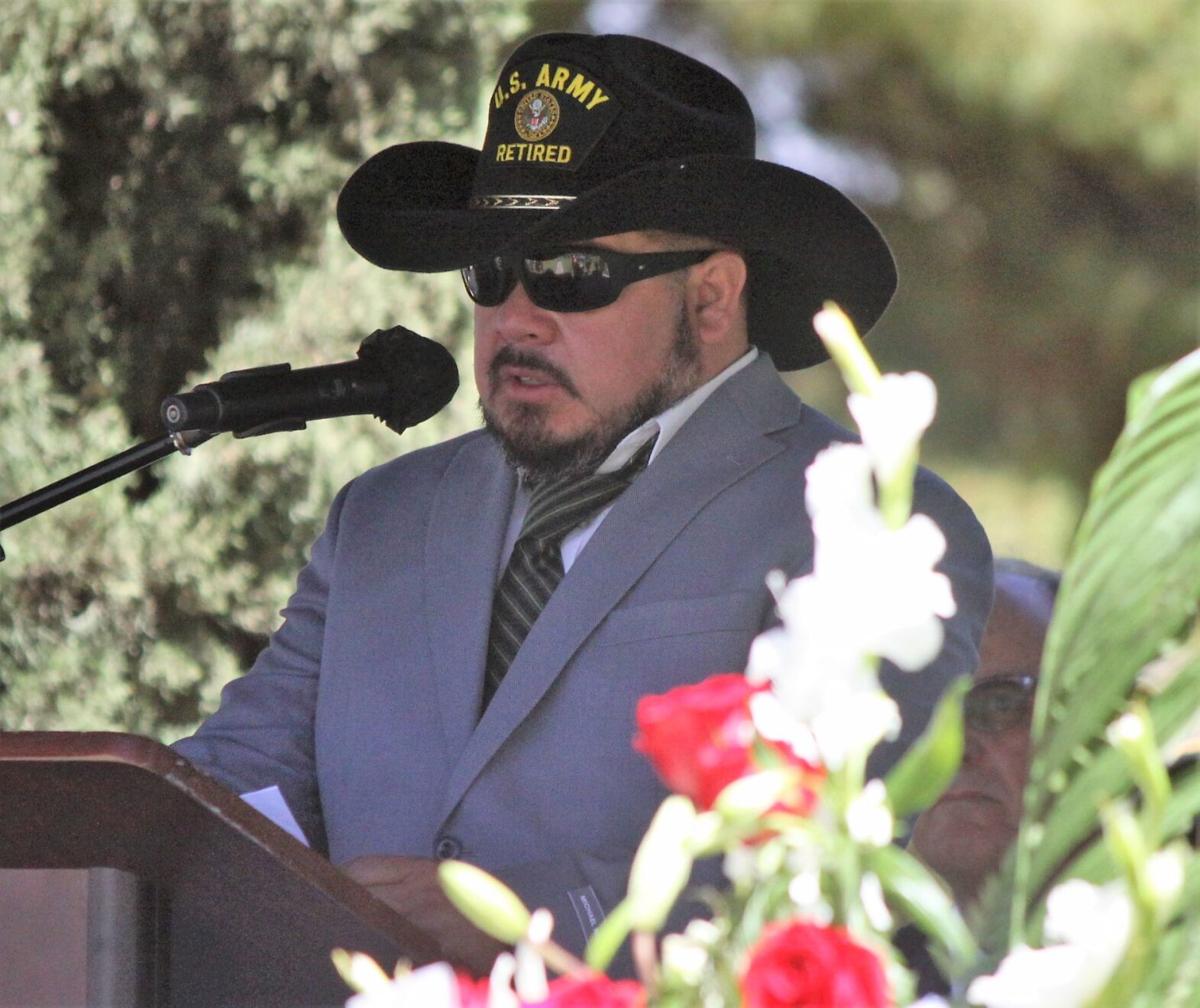 Frank Owen, a local highly decorated U.S. Army retired veteran who graduated from Douglas High School in 1994 and has served three tours in Iraq, was the guest speaker at Monday's Memorial Day ceremony. 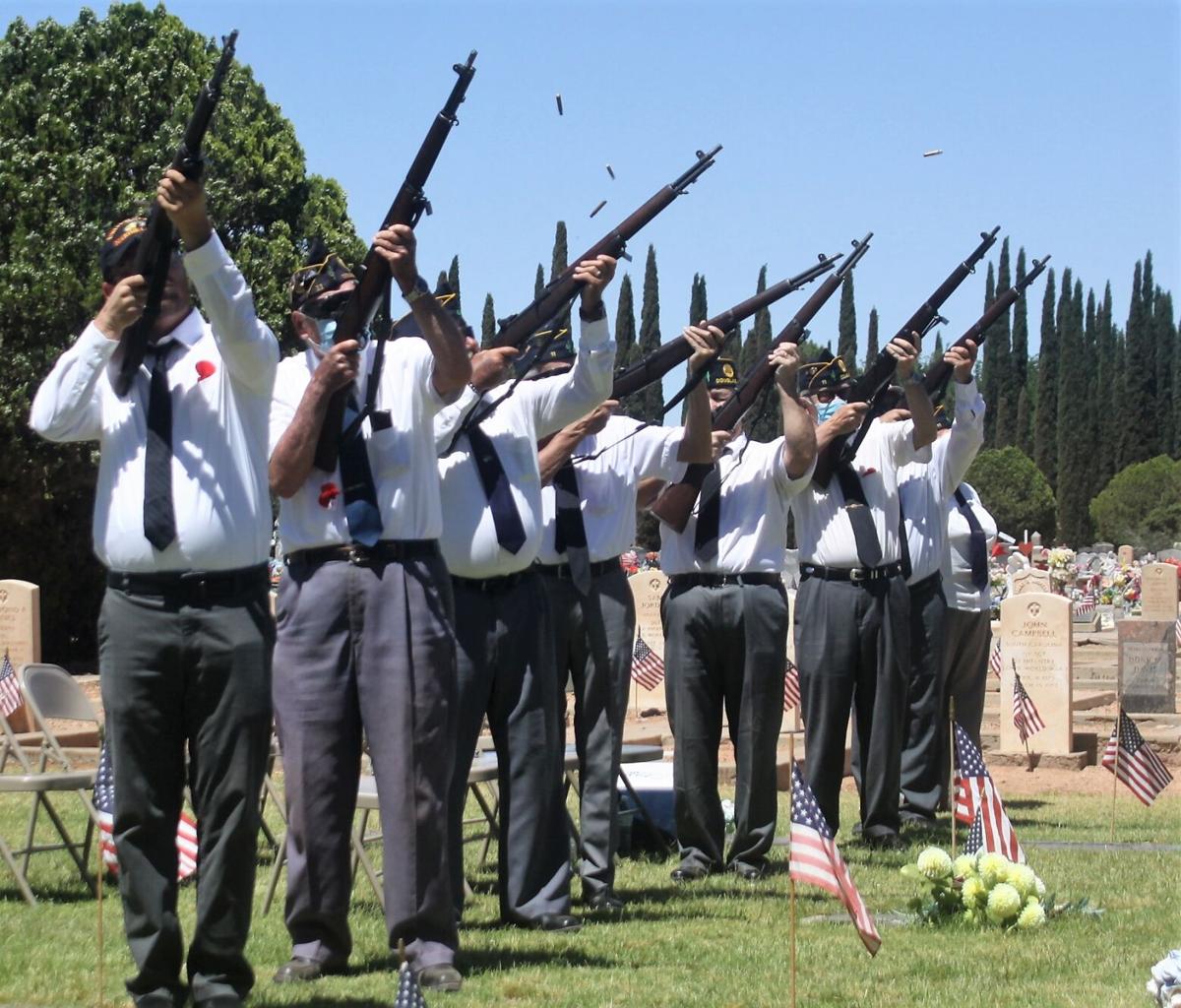 Hundreds of flags could be seen on various graves throughout Calvary Cemetery Monday.

Frank Owen, a local highly decorated U.S. Army retired veteran who graduated from Douglas High School in 1994 and has served three tours in Iraq, was the guest speaker at Monday's Memorial Day ceremony.

DOUGLAS — Douglas residents spent a part of their Memorial Day paying their respects to those who have died serving our country.

The holiday, originally known as Decoration Day, started after the Civil War to honor the Union and Confederate dead.

“I would like to remind us all of the vital necessity of preserving the memories of those who have gone before us, giving their lives so that we may enjoy the many freedoms we inherit to living in the greatest nation on Earth,” Douglas Mayor Donald Huish said in his remarks.”We can honor their sacrifices by never forgetting what it means to live free while enjoying the God-given rights given to all men. Unfortunately there are many in today’s society that would minimize or even have us forget the history of these men and women that we honor today.”

Huish said he has at least six different cousins who have lost their lives fighting for our freedom in World War I and World War II.

“I never knew that one of my cousins, Jesse C. Martineau, was the first soldier from Douglas who was killed in action overseas to have his remains returned home nearly three years after his death.” the mayor said. “He was killed in action in Germany on Dec. 5, 1944. He died a soldier fighting against those who were out to destroy our Christian way of life. He was buried in an American cemetery somewhere in eastern Belgium.”

Huish later revealed that Martineau currently is buried in the Whitewater Cemetery in Elfrida.

“I am so proud of Douglas,” the mayor said. “I am so proud that we are a community that honors our true heroes. May God’s blessings always ring down on our community as we honor those who have paid the ultimate sacrifice. May we always remember them.”

Frank Owen, a local highly decorated U.S. Army retired veteran who graduated from Douglas High School in 1994 and has served three-tours in Iraq, was the guest speaker.

“For the second year in a row Memorial Day looks a little different than it has in years past,” Owen said, at times getting a little emotional as he gave his remarks. “Still we hold on to some semblance of what life was and what we hope it will return to. The memories and emotions this day brings are always the same. For many families across the nation Memorial Day is a stark and often painful reminder of those who were never afforded the opportunity to be honored as veterans. Please join me in recognizing those family members here today who have lost their loved one in service.”

Owen stated this year marks the 20th consecutive year the U.S. has been at war, longer than any other conflict that came before.

“About 2.7 million Americans have served in Iraq and Afghanistan,” he said. “Over half of them have been deployed more than once. Those who have returned are now our community members, neighbors and friends.”

Owen shared a personal experience that occurred on Nov. 2, 2003.

“I went to report for duty,” he said. “When I arrived there was plenty of hustle and scurrying. I went to get my brief for my shift and was advised that a Chinook carrying 16 soldiers from Elisad Air Base to Bagdad, Iraq, was shot down and all 16 soldiers perished. Two were medics which were my close friends. I retell this story because I should have been one of those 16 soldiers (who died that day).”

Owen stated that due to God’s plan and his supervisor advising him not to report since he had been previously approved for R&R, he wasn’t on board.

“Therefore because of this season I stand before you to remember those soldiers that perished on that Chinook,” he said. “I know we all have our personal stories. Lets not forget those who went before us and paid the ultimate sacrifice for this great nation.”

Dick Keith, a local Purple Heart recipient who fought in Vietnam, was one of those in attendance at Monday’s memorial.

“Today brings back so many memories,” he said. “I come every year except for a few when I was ill and I see all these flags. A lot of people I grew up with are buried here.”

Keith said growing up in a patriotic community like Douglas, it was pretty much expected those who were able would go off and serve their country.

“There were so many of us that did serve,” he said. “Being in the service was wonderful for me. It paid for my education. I’m just grateful we have days like this where we can remember those who lost their lives protecting what we have today. It’s wonderful to be here.”