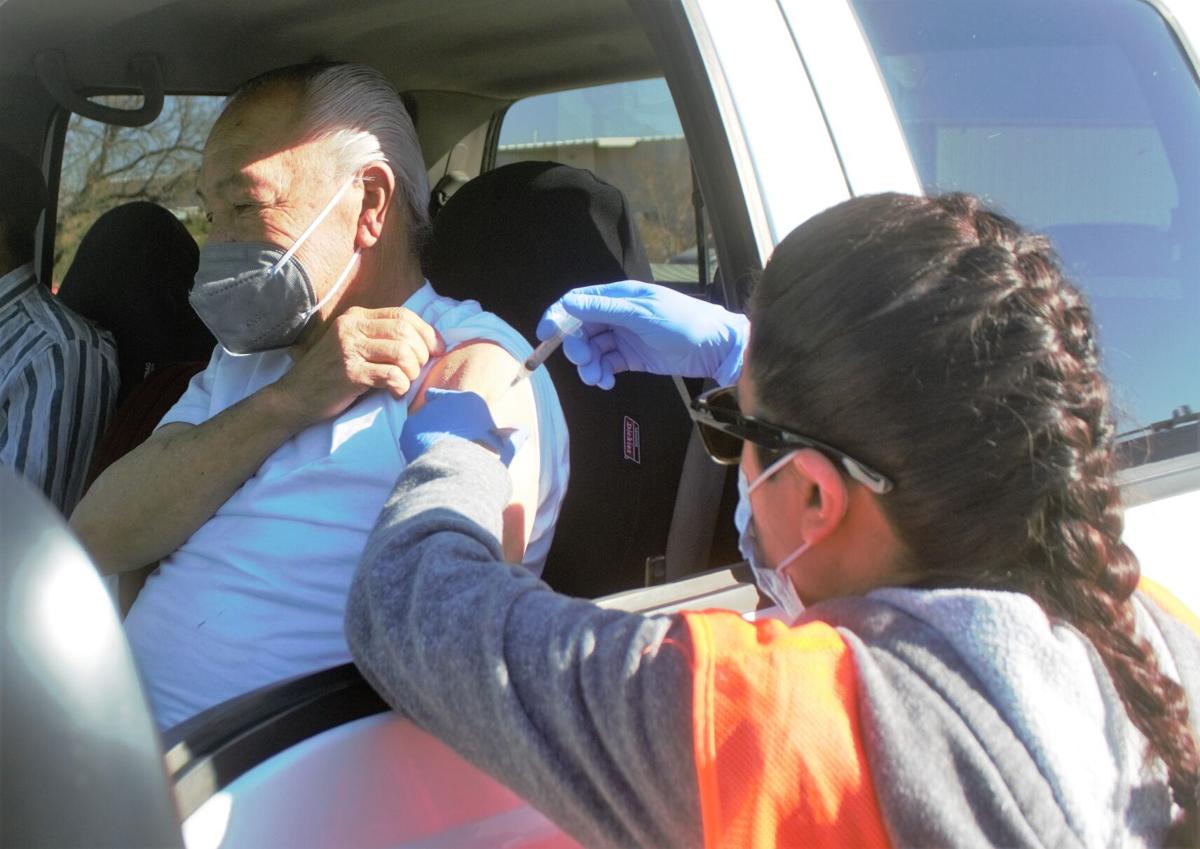 Hector Ortiz of Douglas is given the Moderna COVID-19 vaccine Saturday by Nadia Gilette of Chiricahua Community Health Center Inc. 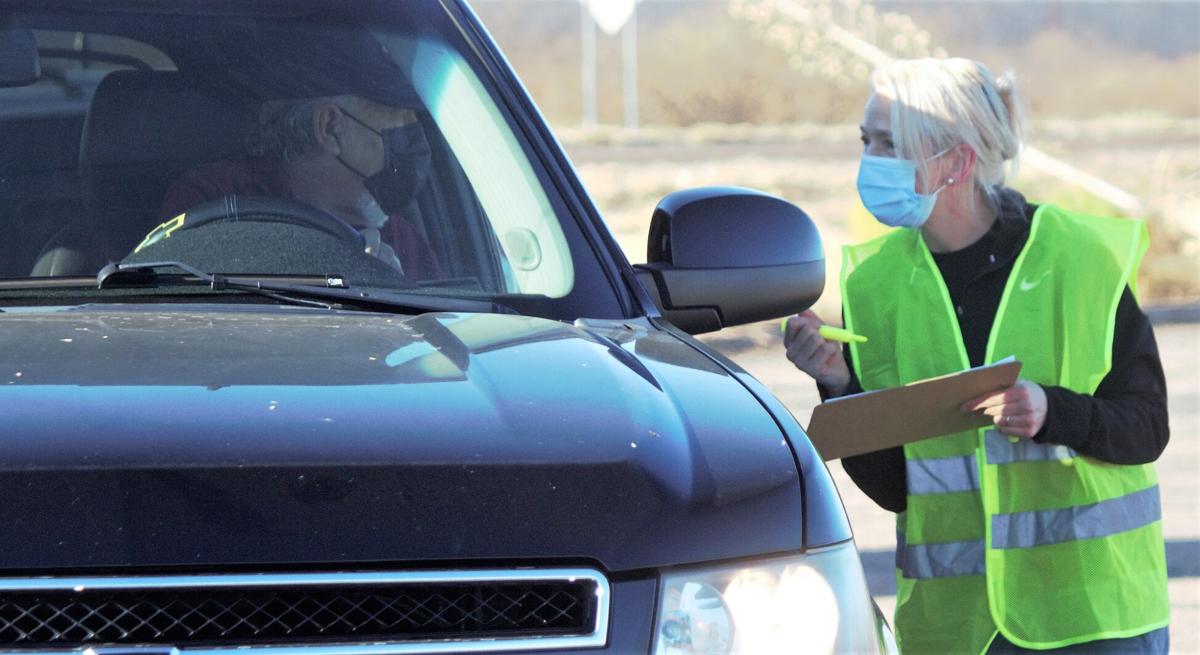 Dr. Darlene Melk assists vehicles pulling into the vaccination clinic Saturday,  making sure they get in the right lane. 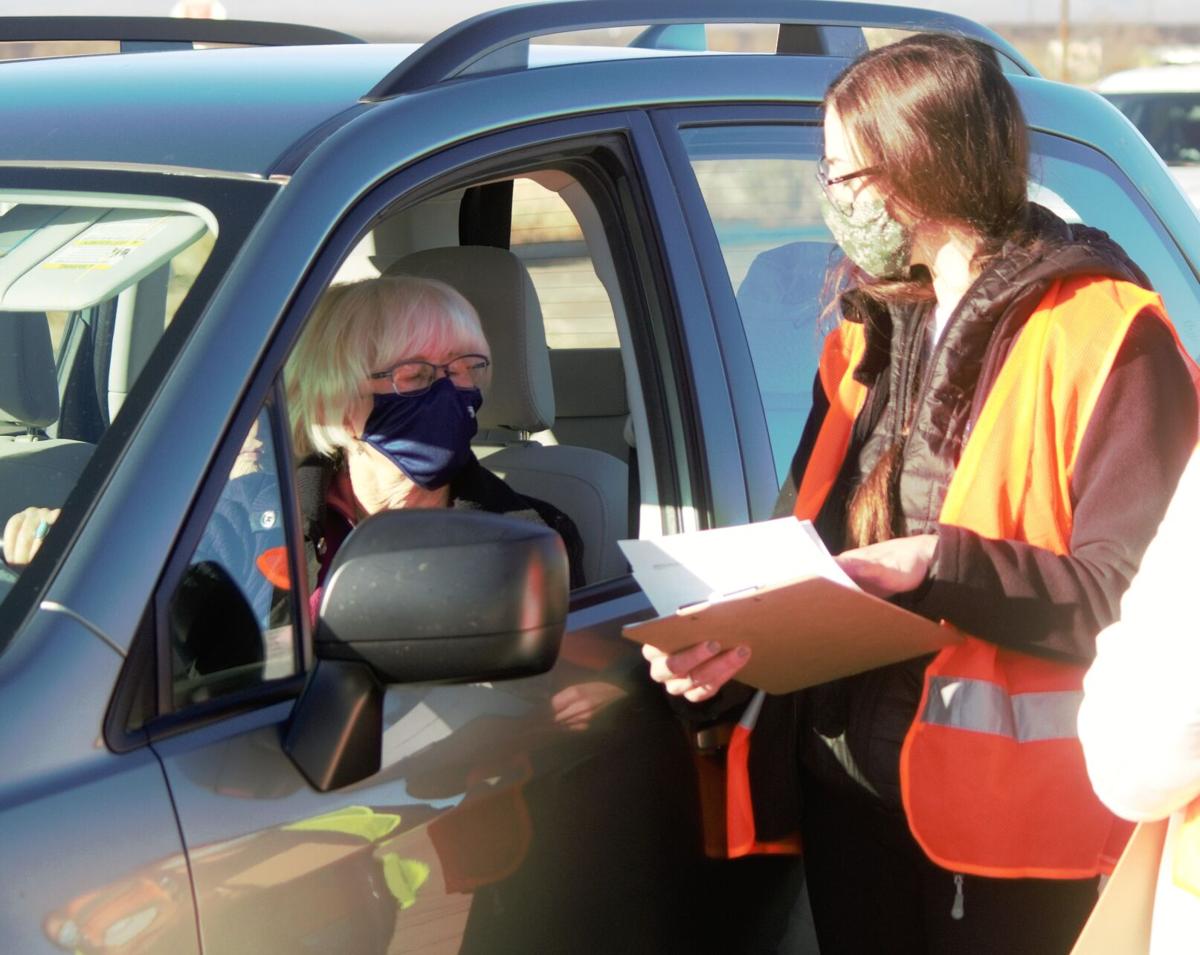 Emily Harris, infectious disease program manager for Chiricahua, helps Joey Mitchell of Sierra Vista, who brought both her mom and her aunt to the clinic in Douglas, with the paperwork prior to them getting inoculated.

Hector Ortiz of Douglas is given the Moderna COVID-19 vaccine Saturday by Nadia Gilette of Chiricahua Community Health Center Inc.

Dr. Darlene Melk assists vehicles pulling into the vaccination clinic Saturday,  making sure they get in the right lane.

Emily Harris, infectious disease program manager for Chiricahua, helps Joey Mitchell of Sierra Vista, who brought both her mom and her aunt to the clinic in Douglas, with the paperwork prior to them getting inoculated.

Another Phase 1B vaccination clinic is scheduled for Saturday, also in Douglas, from 10 a.m. to 2 p.m. at the same location. Registration for the event took place Tuesday on the CCHCI website.

The Phase 1B event, which was the first of its kind for Cochise County, was for anyone 75 years of age or older and included law enforcement, fire, corrections workers, teachers and childcare workers, critical industry workers (utilities, gas/power, food supply), and any remaining health care workers from phase 1A.

The event began at 9 a.m. at the old Kmart parking lot, which is now home to the Ministerios Tierra de Bendicion Church, and was scheduled to end at 2 p.m. Cars began lining up an hour prior to the start of vaccinations. The last vehicle exited the 15-minute waiting area following the vaccination around 3:15 p.m.

In an effort to speed up the vaccination process four separate vaccination stations were set up Saturday. About 30 CCHCI staff members, with assistance from the Douglas Police Department, worked to get vehicles checked in, making sure all the necessary paperwork was in order prior to each vaccination.

People from all over Cochise County, some from as far as Portal and Huachuca City, came to Douglas to get inoculated.

“We were thrilled by the overwhelming response to our initial vaccination clinic,” said Emily Harris, Infectious Disease Program manager for CCHCI. “While not without its hiccups, we were still able to vaccinate 300 people in about four hours, which is amazing. Over 80% of those vaccinated were 75 years of age and older, while the remaining 20% were 1A healthcare workers. We are currently working on a more sustainable plan for both COVID-19 testing and vaccinations, since this will be a long-term campaign.”

S Martha Montavillo of Huachuca City, who will turn 99 in March, was reportedly the oldest person to get inoculated while Lilia Lara, 85, of Douglas was the first person to receive the vaccine Saturday.

Lilia’s son, Frank, said the possible consequences of COVID-19 prompted him to get his mom signed up for the clinic once the event was announced.

Cornelia Munoz, also of Douglas, made sure to get her parents, Roberto and Conception Munoz, registered after hearing of the event. She said they waited in line for about an hour but enjoyed visiting with other people in other vehicles as they each moved toward getting vaccinated.

Both Douglas residents had nothing but praise for the job CCHCI staff did Saturday.

“The staff there was amazing,” Munoz said. “When we first pulled up we were in one of the lines outside the parking lot and we thought we were going to be there forever. But we weren’t. It was very well organized. Our appointments were at 11. We showed up at ten-till and we left at 12:32. The longest part was at the second to last tent where they were inputting all our information into the computer. We understood going in there was going to be a wait and we were prepared for that but considering what we saw when we showed up to when we actually left the parking lot was not that bad.”

Munoz said the safety of her parents is what prompted her to bring up the possibility of getting vaccinated.

“As soon as I brought it up to them, without hesitation, they both said ‘yes’,” she said.

Munoz said Monday that neither parent has experienced any side effects from the vaccine. Dr. Darlene Melk stated after the event Saturday, other than one sore arm which led to the application of an ice pack there were no reported cases of adverse side effects.

Munoz said both parents will get their booster Feb. 6.

“We just wait now for word on where that shot will be given,” she said. “Because all our information is already in their computer, I expect this time to be much faster.”

“We are all so thrilled that we were able to have Saturday’s event and help so many people,” Vickers said.

Vickers added she and the staff at CCHCI are very appreciative for everyone’s patience on Saturday.

“The fact that our team managed to get 300 people vaccinated in four hours is an unbelievable feat,” she said. “Chiricahua is fortunate to be in the position to be able to vaccinate large numbers of Cochise County residents now, and into the future.”

Vickers wants to remind those who received the first dose of vaccine Saturday it is critical they understand this is a two-dose process.

“They are not fully vaccinated against COVID-19 until after their second COVID vaccine dose.” she said. “Once (the) second doses are due, we will work on getting those vaccines administered.”

Vickers has created a FAQ about vaccinations on CCHCI’s social media pages and she is also working on getting it on its website under the “COVID-19 Updates” since there’s no other entity that has provided comprehensive information to the public about everything that is happening in regards to the vaccinations.