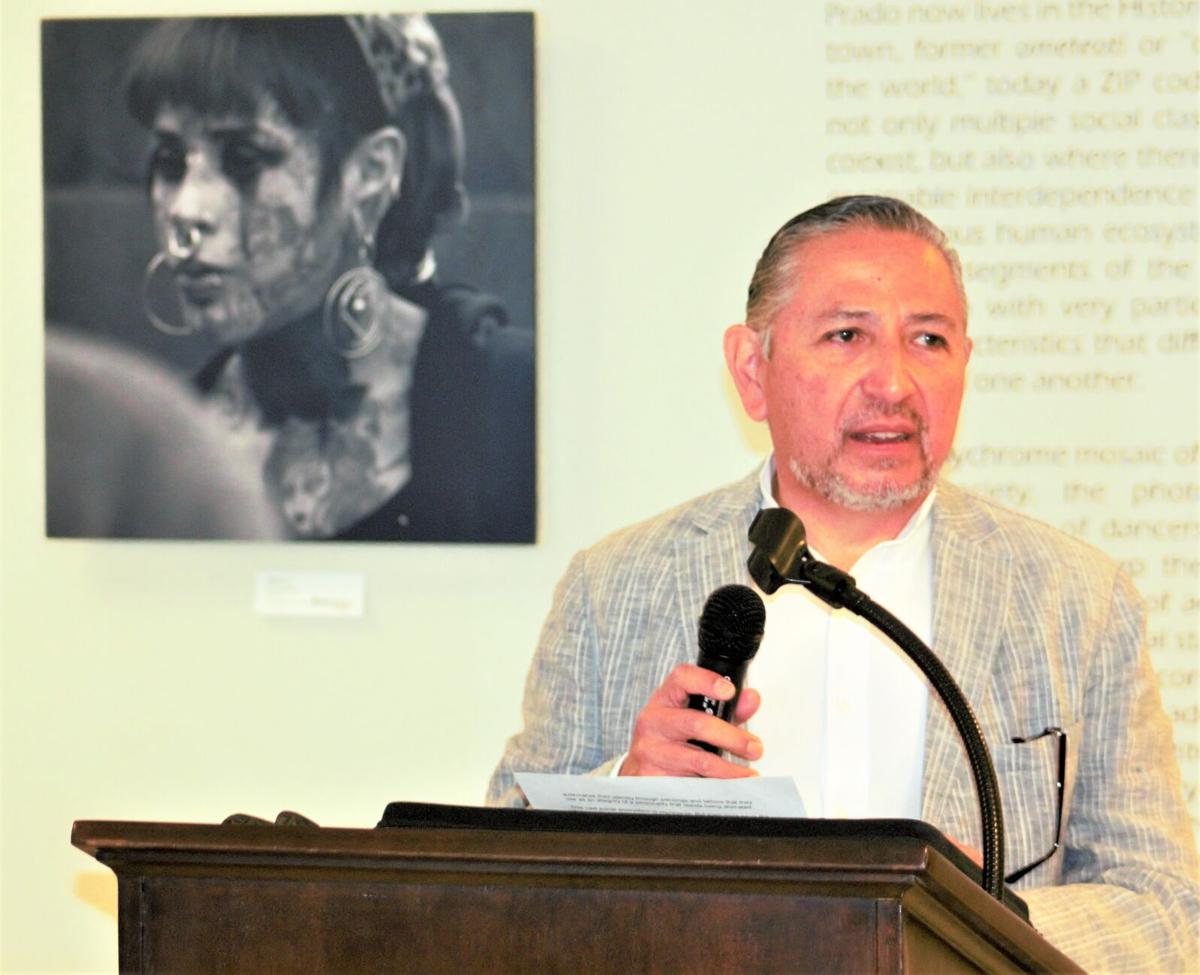 Jacob Prado, standing in front of one of his more famous photographs, addresses those attending his exhibit opening at the Mexican Consulate in Douglas. 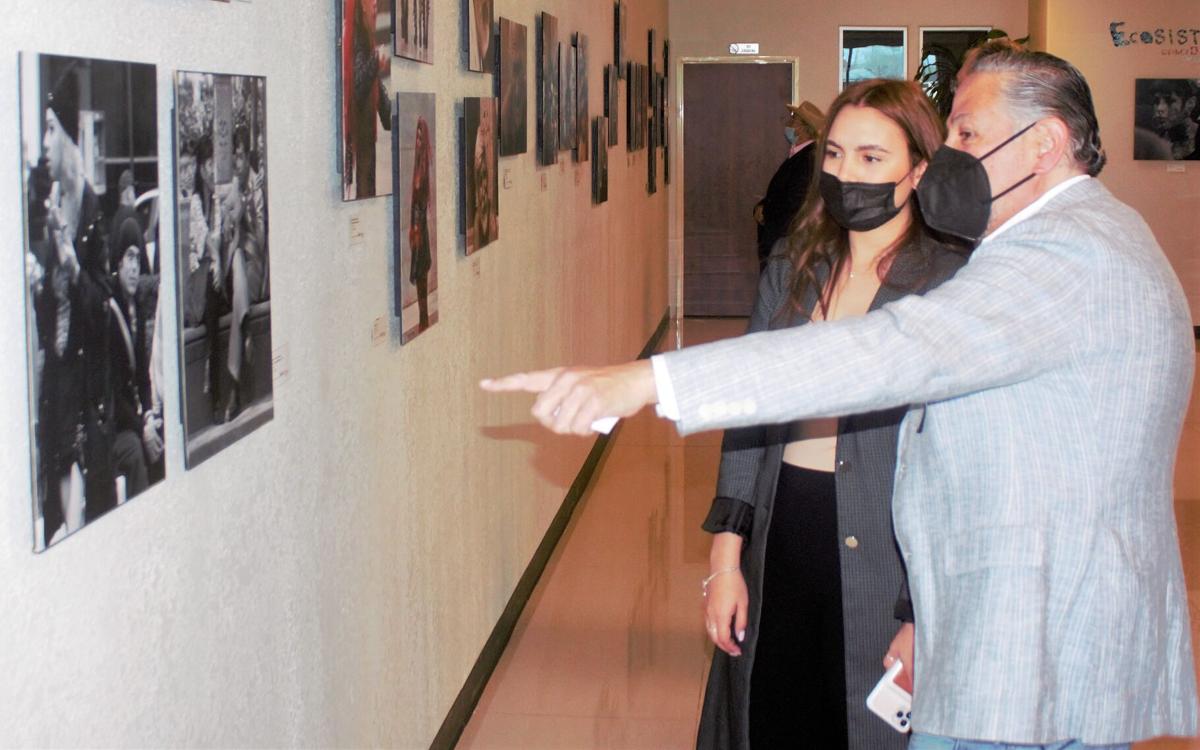 Jacob Prado and Bibi Harris of Douglas talk about some of his photographs at his exhibit opening at the Mexican Consulate in Douglas. 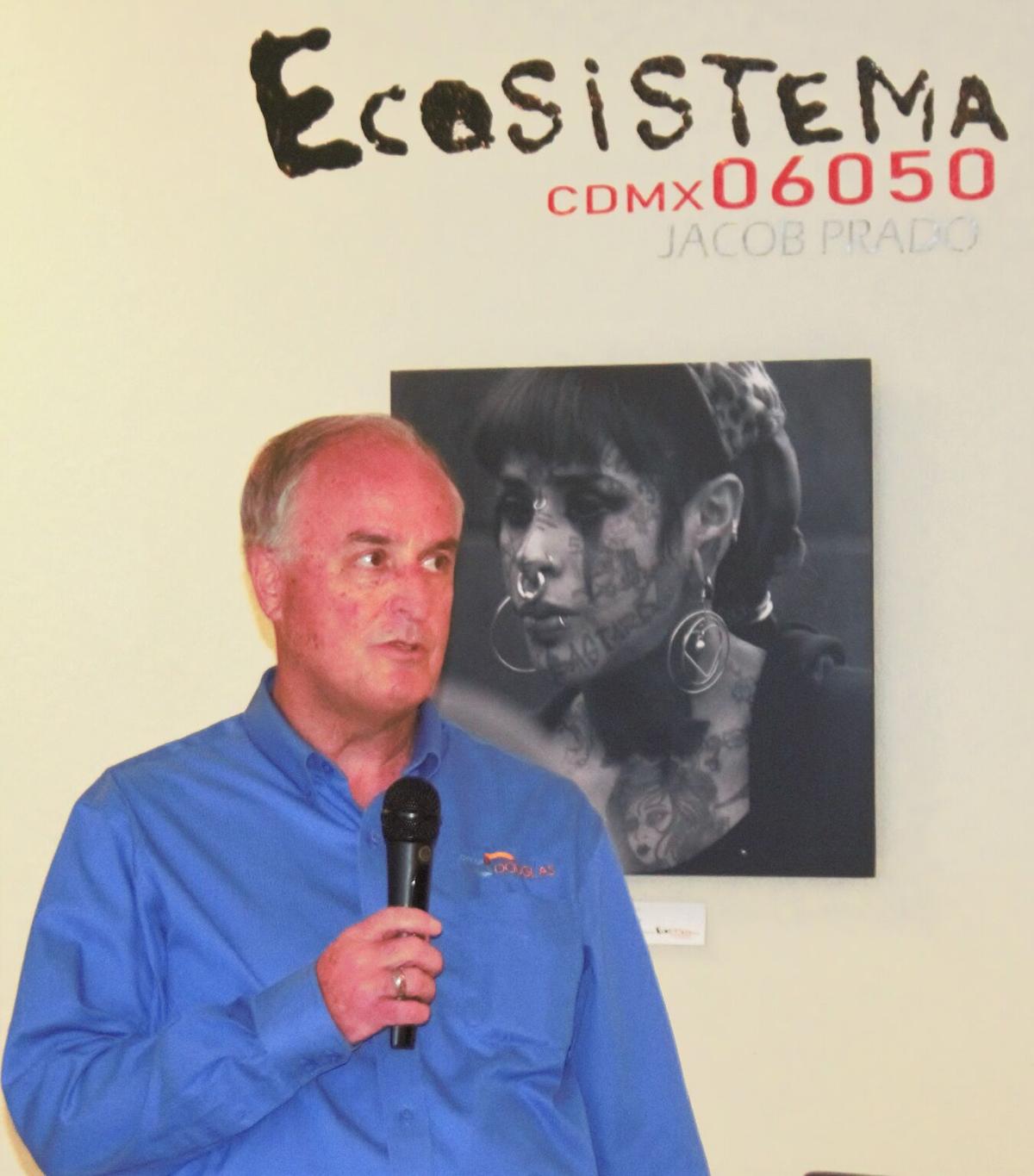 Douglas Mayor Donald Huish welcomes Jacob Prado and his exhibit to Douglas at the event opening.

Jacob Prado, standing in front of one of his more famous photographs, addresses those attending his exhibit opening at the Mexican Consulate in Douglas.

Jacob Prado and Bibi Harris of Douglas talk about some of his photographs at his exhibit opening at the Mexican Consulate in Douglas.

Douglas Mayor Donald Huish welcomes Jacob Prado and his exhibit to Douglas at the event opening.

DOUGLAS — Jacob Prado’s “Ecosystem 06050” collection, a photographic exhibition that focuses on Mexico City, the place that the artist now calls home, is on display at the Mexican Consulate on G Avenue.

The collection, which has been seen all over the United States, aims to be an X-ray of the place that Prado identifies as home; an abstract and vital image that goes beyond a logical explanation, with a lot of color as well as black and white. It is the portrait of a space where time seems to have stopped for centuries and simultaneously continues to shout its stories with the young and vibrant pride of when his Aztec ancestors chose this place to live and transcend.

“Jacob Prado is not only an ambassador of Mexico, representing Mexico in different capacities, but now he is known as an artist,” saidRicardo Pineda, head of Mexican Consulate in Douglas.”We are very happy to be able to host this exhibit.”

A special reception honoring Prado and his exhibit was held March 19 when Douglas mayor Donald Huish welcomed the exhibit.

“This is such a wonderful opportunity we have to share this cross border art,” the mayor said. “It’s important that we draw attention to our communities that we have in Douglas and Agua Prieta. I’m a firm believer that we’re one community. Yes we are separated by a wall and some barriers but we are one community. Being able to express and share this culture that is ours; it’s our culture and that’s the Douglas/Agua Prieta area. It is another gem for the city of Douglas.”

Prado said this collection is from a series of photographs he’s been taking for the past four years since he returned to Mexico City after living for more than two decades in the United States and Canada.

“Having the opportunity to walk the streets of downtown Mexico, postal code 06050, represented for me the opportunity for discovery of Mexican society,” he said. “In no city where I have lived or been involved have I experienced a greater diversity than what we have here.”

He states each shot of his camera captured the “melting pot” of Mexico’s past and present.

“At the end of the day we are all Mexicans whereas in the United States all are Americans,” he said. “In Mexico, as in Arizona and in the rest of the world, we are all human beings and we deserve the respect of all of us. It doesn’t matter our background, our nationality, our appearance or even the masks or tattoos we wear.”

Douglas resident Bibi Harris was one of those who attended the exhibit opening.

“One of the factors that motivated me to attend the exhibition was that for me, art and culture are important factors in our daily life and knowing that Jacob Prado is a Mexican artist just like I was, was very exciting,” she said.