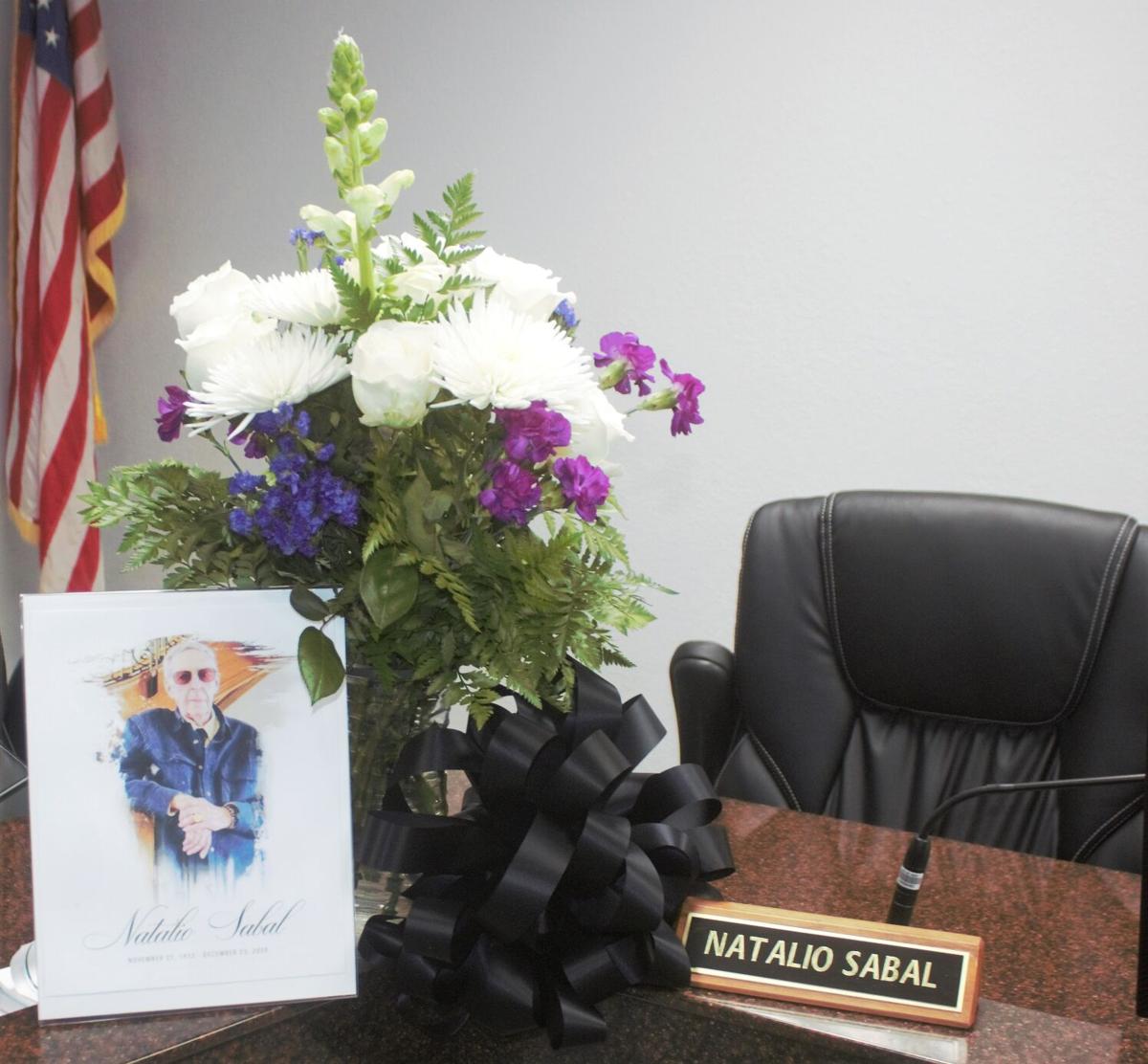 A vacant chair with a bouquet of flowers with a black bow, and a picture of Natalio Sabal along with his nameplate, were displayed at Tuesday's DUSD special organizational board meeting, at which the former board member was honored. 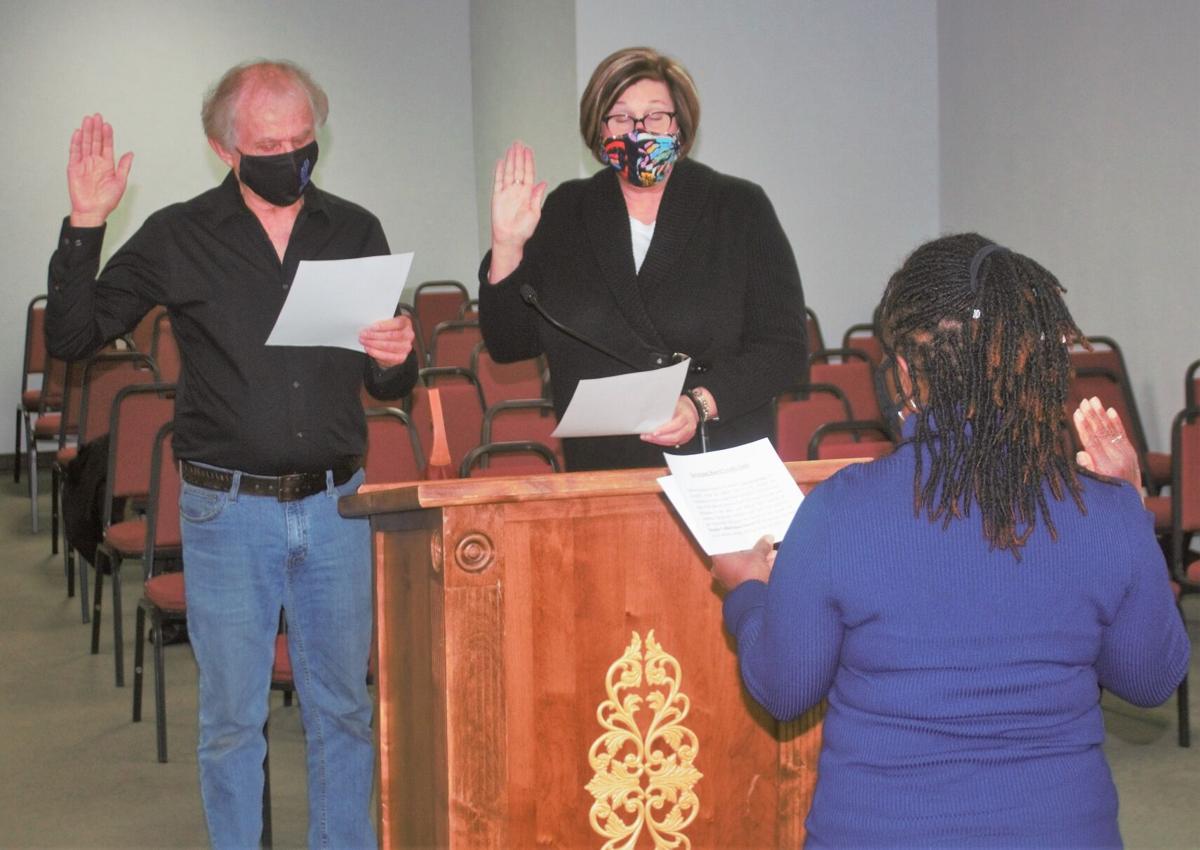 Ray Borane and Jana Selchow are given their oath of office by Cochise County School Superintendent Jacqui Clay Tuesday.

A vacant chair with a bouquet of flowers with a black bow, and a picture of Natalio Sabal along with his nameplate, were displayed at Tuesday's DUSD special organizational board meeting, at which the former board member was honored.

Ray Borane and Jana Selchow are given their oath of office by Cochise County School Superintendent Jacqui Clay Tuesday.

DOUGLAS — Former DUSD board member Natalio Sabal was honored at a special organizational board meeting Tuesday, which also included the swearing in of his successor, Jana Selchow.

Sabal, who served eight years on the DUSD board and had previously served 21 years on the Cochise College governing board, more than once as its president, passed away Christmas Day. At the special meeting there was a vacant chair with a bouquet of flowers with a black bow and a picture of Sabal along with his nameplate.

Selchow and Sabal’s longtime friend and colleague, Ray Borane, were sworn in to their respective seats on the DUSD board by Cochise County School Superintendent Jacqui Clay.

Selchow, a retired DUSD educator, says she’s excited for the opportunity to serve on the board and looking forward to what lays ahead.

“I’m tremendously honored,” she said. “I’ve always toyed with the idea of serving on the board. Now that I am retired I felt I would have a little more time to do this.”

Selchow said she considers it a privilege to be able to fill a chair once held by a man she has so much respect for.

“He made a huge impact on my son, Jordan, and his best friend, Tanner,” she said. “They were buddies with Mr. Sabal. He always made students and all children feel that they mattered. He always offered a positive word or had a good, firm handshake. He would always look you in the eye and offer encouragement. He made such a huge impact on our students and made them feel that they mattered, and they do.”

Borane, who was elected to his third term as board president at the meeting, had a moment of silence for his friend and colleague at the start of the meeting and then made the following statement.

“We have a very noticeable and sad vacuum this morning at the board table,” Borane said. “And we have a much larger void in our hearts as we mourn our dear friend and colleague Natalio Sabal. A person who was always proud of being a patriot, an advocate for education and a lover of the local youth. I don’t know how many times I heard him say his oft stated expression: ‘I do it for the kids.’ He hardly missed any school functions or events as a board member — especially if they were serving a meal. And if they weren’t, he would strongly suggest that they do. (He was) an amazing man in so many ways. He dedicated his life to community service. He was a remarkable man in so many ways. We will miss him dearly and his support and voice for the best education possible for our students and for his ongoing support for the welfare of all our district staff.”

Superintendent Ana Samaniego said Sabal had an impact on her life beginning when she was an educator and even more so when she became superintendent.

“He has always supported all of our employees and always fought for every employee to get one more dollar, one more penny because they deserve better salaries,” she said. “He will be greatly missed. I know for DUSD, he leaves a great vacancy in our hearts.”

Sabal’s fellow board members Mitch Lindemann, Mario Ramos and Dr. Ed Gomez also made remarks about Sabal and how much they enjoyed serving with him on the board.

Clay reflected that when she first met Sabal he was a candidate for the school board.

“Usually those meetings take about 30 minutes,” she said. “That meeting lasted two hours. After those two hours he had a fan.”

Clay said their bond strengthened when Sabal learned that she, too, was a native of his home state of New York.

“He found out my background and connected himself to me,” she said.

The superintendent announced that Sabal will be nominated as the first inductee into the Cochise County Educators Hall of Fame, which will happen in the coming months.

“I have talked to many people about him and many people, regardless of whether they live in Douglas or not, know of Mr. Sabal. They all agree that he should be the first person that we honor. Thank you Mr. Sabal, and his family, for all that they have done for this community. He was truly a wonderful man.”

“Natalio was one in a million,” Zamar said. “He always introduced himself as Natalio. He was so loved by his students because he did so much for them, even though he was tough on them.”

“He did a lot of good for a lot of kids in Douglas,” he said. “He was always concerned about the young people. He was always trying to help them improve their lifestyle. I really appreciate and enjoyed knowing him. It was a real pleasure knowing him.”

The DUSD board will meet again Tuesday, Jan. 12, at 5 p.m. for its regular monthly meeting.