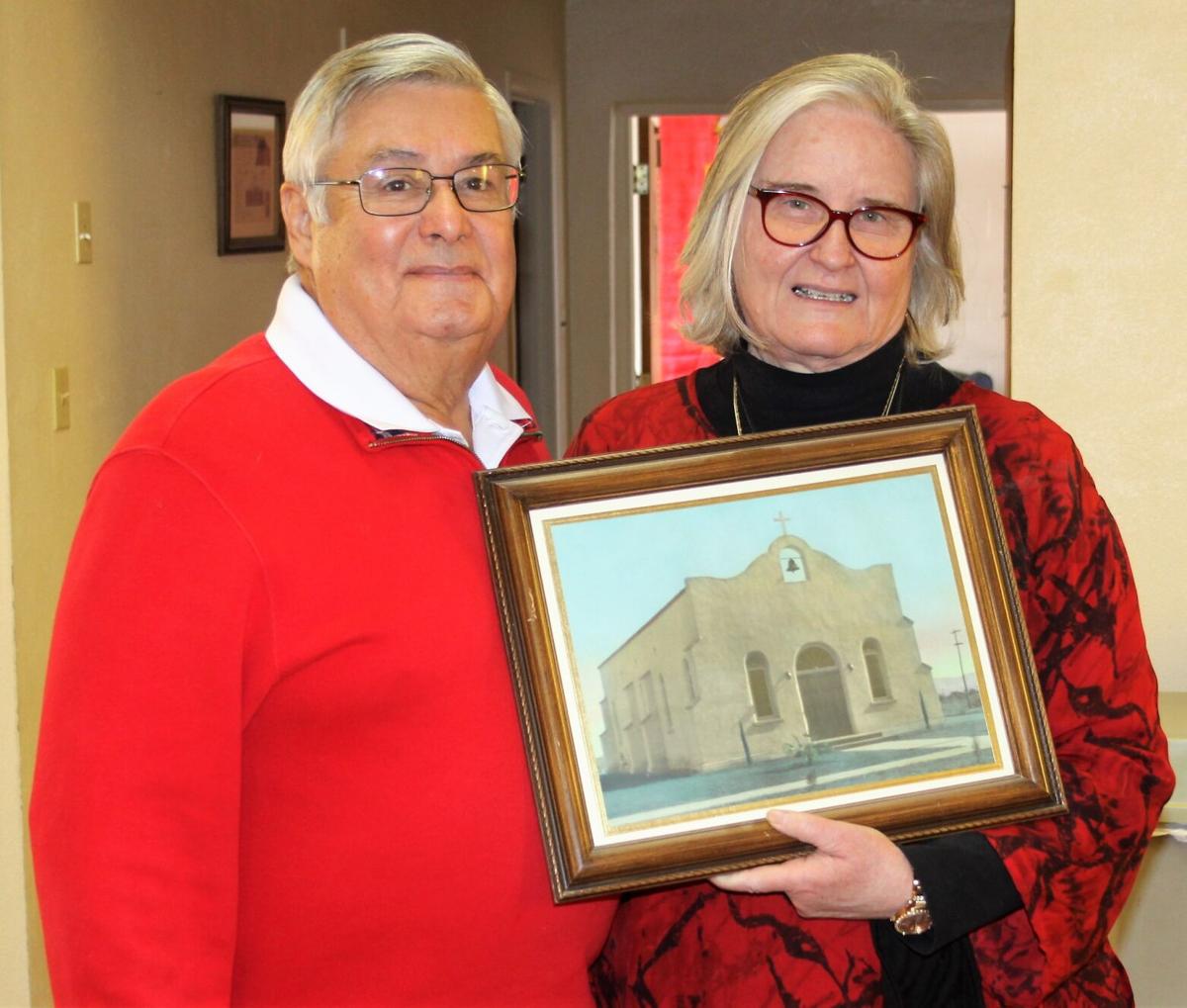 Louis and Teresa Gallardo display a picture of the church in 1936. 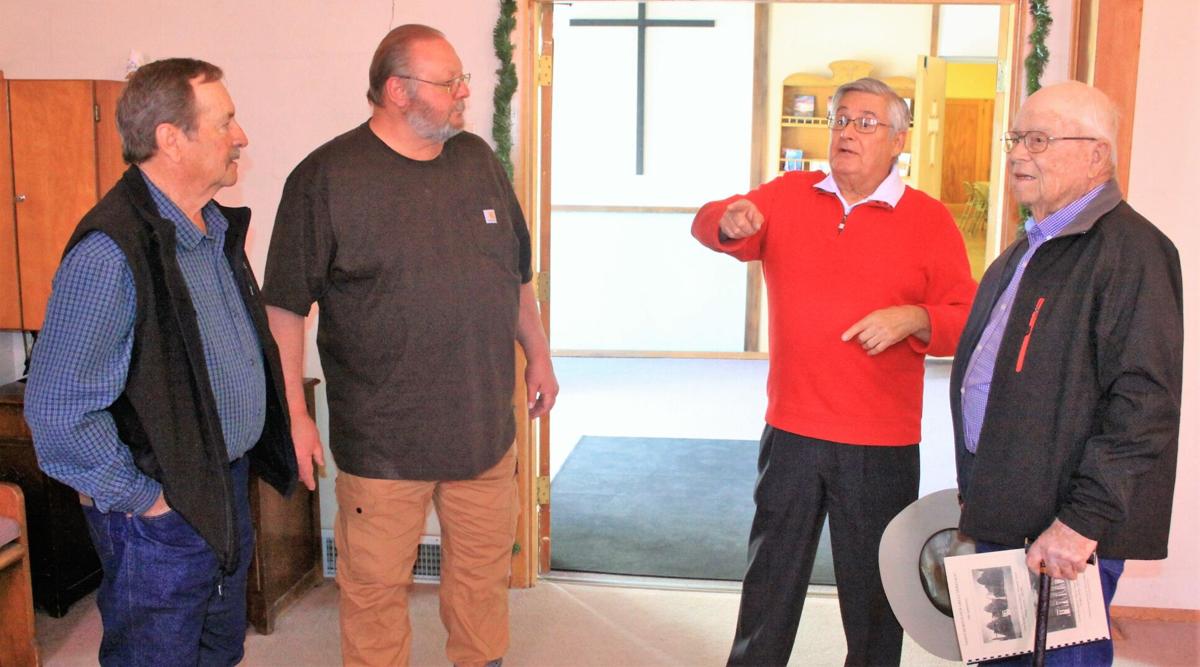 Don Hudgins, Barry Bratton and Louis Gallardo visit with J.T. Haas of Douglas, whose family was one of the seven local families that helped start the church 100 years ago. 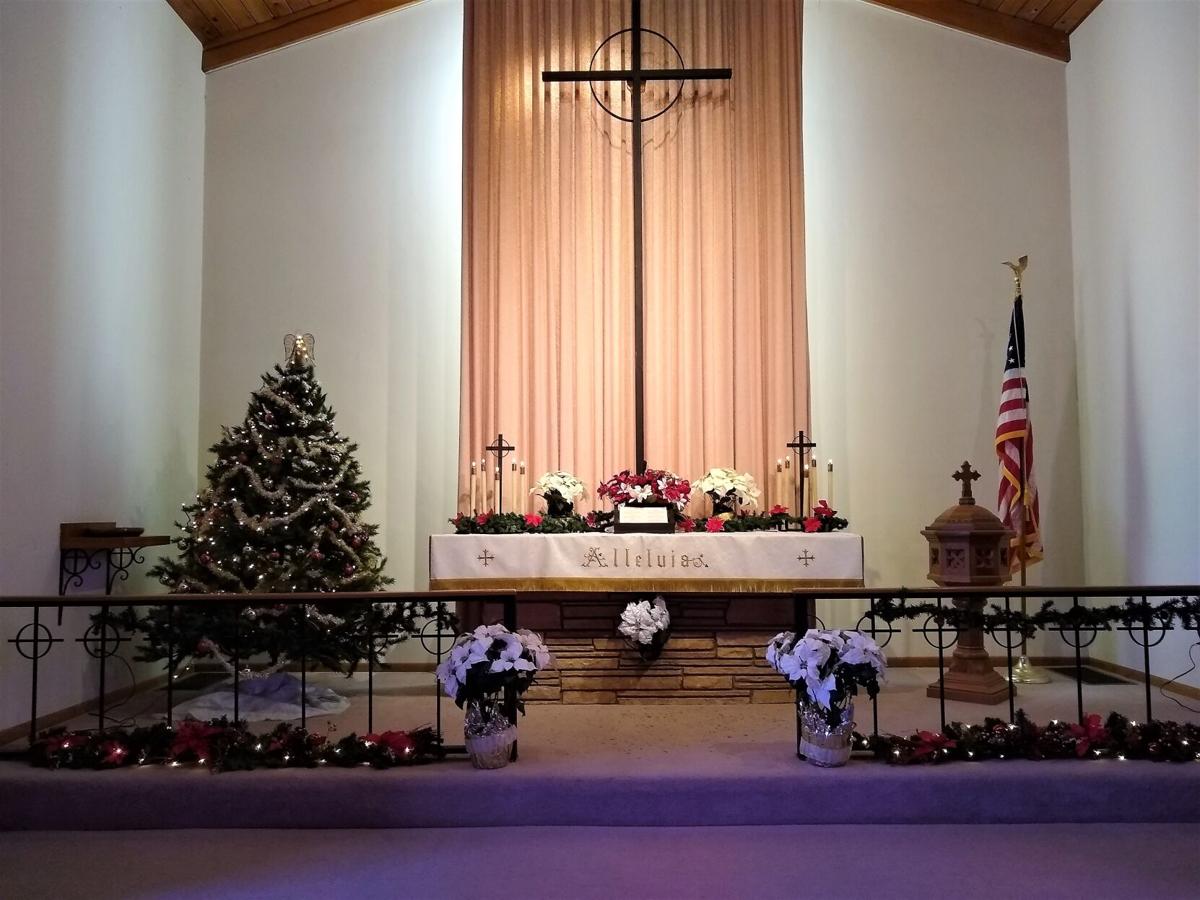 The alter was set up for Christmas in December. 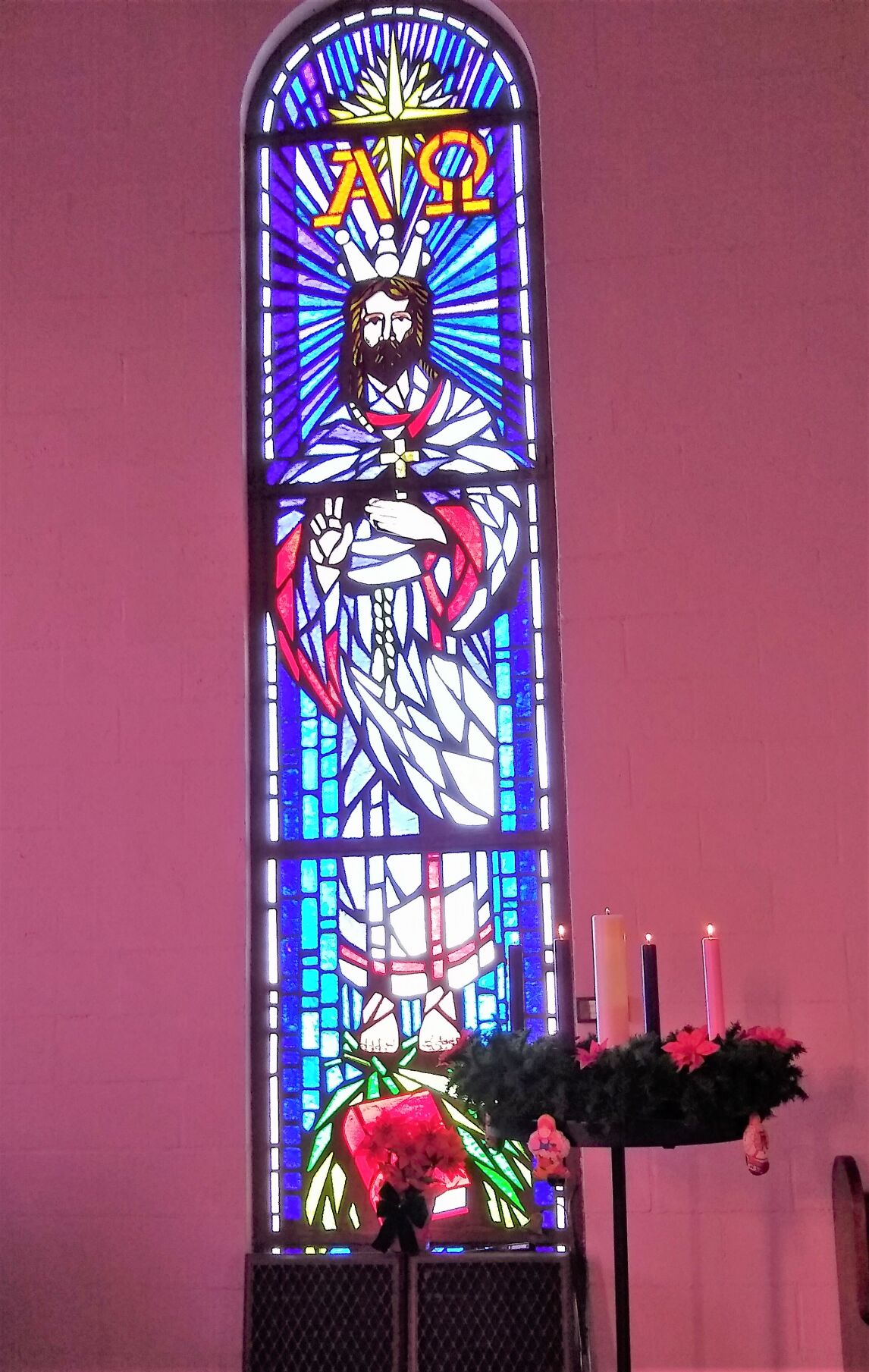 In April 1978 a faceted art glass window depicting Christ as King was a gift from a Mr. and Mrs. Otto.

Pam Hudgins and Teresa Gallardo tend to the candles that are lit on the alter Saturday during the open house.

Louis and Teresa Gallardo display a picture of the church in 1936.

Don Hudgins, Barry Bratton and Louis Gallardo visit with J.T. Haas of Douglas, whose family was one of the seven local families that helped start the church 100 years ago.

The alter was set up for Christmas in December.

In April 1978 a faceted art glass window depicting Christ as King was a gift from a Mr. and Mrs. Otto.

Pam Hudgins and Teresa Gallardo tend to the candles that are lit on the alter Saturday during the open house.

DOUGLAS — On Jan. 23, 1921, St. Paul’s Evangelical Lutheran Church in Douglas was chartered with the help of seven local families.

This past weekend the church celebrated its 100th anniversary. The celebration attracted just a handful of people, most of whom were church members. One special guest, however, was J.T. Haas of Douglas, whose family was one of the seven local families that helped get the church started in Douglas.

Haas stated it has been years since he was last inside the church on 10th Street. When he learned of the commemorative open house he decided to stop by and visit a place he once used to attend services in.

“It really hasn’t changed all that much since the last time I was in here,” he said. “I was a member here for a long time before they ran me out.”

Louis and Teresa Gallardo are longtime members of the church. Teresa just announced that she and her husband have sold their home in Douglas and will be moving to Houston, Texas, sometime this summer, leaving the local church with two less congregants.

“Nearly 50 years ago my family moved to Douglas,” Teresa said. “A few days after the move, in September 1971, we attended church at St. Paul’s for the first time. My parents, two sisters, my brother and I sat in the fourth pew from the front on the south side for the first of many, many times.”

“As the first hymn began, we all sang out just like our mother had taught us. Later, Pastor (Harold) Hagedorn would share that he was surprised by the volume from the congregation that morning. He sat up and looked around to see who was there. He easily spotted the newcomers.”

Gallardo said over the years her family has celebrated three weddings in the church (one of those being hers to her husband, Louis) and also participated in four confirmations, two of which were for her children, Catherine and Sean.

“We have participated in (and organized) numerous Sunday schools, vacation bible schools, and children’s Christmas Eve services,” she said. “Our (extended) family has served in all capacities for St. Paul’s and performed services from cleaning and organist to church officers and lay minister. In 2021 we celebrate our 50th year at St. Paul’s Church and joyfully join the celebration for St. Paul’s 100th anniversary.”

Louis added that due to financial challenges the church has been unable to pay a pastor and in his absence, he, along with Barry Bratton, both elders in the church, are rotating through the pulpit two Sundays at a time.

“(We) are conducting the worship services, visiting shut-in individuals and maintaining the secular business side of the church,” Louis said. “We use sermons from ordained pastors who publish them online for us to use. We credit each pastor’s work at the beginning of each sermon.”

“Our former pastor, Timothy Poetter, is now a chaplain at the (Arizona Department of Corrections) on Highway 191. As the years passed, SPELC and Grace Lutheran of Warren, our sister church of that time, could no longer support his employment. Our synodical affiliation was dissolved and we declared ourselves an independent Lutheran Church. SPELC had to release him because (SPELC) could not pay him enough to support his family.

“He is making a huge impact at the prison with packed, standing-room-only service for his sermons. This has to be very gratifying for him and a true blessing to his gospel mission. We are very happy for him to have found a fulfilling ministry.”

Louis says the congregation at SPELC is that of seven or eight elderly souls with no one younger than 60 regularly attending.

“There are no children,” he said. “Over the last 10 years or so (our) membership has decreased because of retirement, death or moves out of town for work. The decline happened, in my opinion, because Phelps Dodge closed and moved away and a lot of people from this church were the German mining engineers.

“People who were brought here from Europe to administer the mines. When the mines went away, they went away. We are seeing some people church shopping. We have not seen snowbirds for the last three years. Past members are being actively recruited to return.”Pam and Don Hudgins are two of the newest members of the SPELC, having joined in 2019. They join with Barry and Elsa Bratton, who have been members since 1983, and Laurel Cryar, who has been a member since 1984. They all describe the church as their second home, saying it doesn’t feel right if they don’t attend church on Sunday or take part in its functions.

Barry Bratton states he feels today’s society has lost touch with God and needs to find a way to reconnect and he hopes one day to see the church packed like it used to be on Sundays.

He remembers in the “old days,” if you arrived late you would have to park a block away and walk to church whereas nowadays curbside parking is available.

Louis jokes those who did arrive late would usually have to sit in the front pews.

“The story of St. Paul’s is not the story of buildings or human accomplishments. Rather it is a story of what God has done for us and through us,” information on the 100th anniversary states. “It is through his grace, which has been poured out on many hearts over the past 100 years.

“When we reflect on that thought we are reminded that God has been with us in the past and will be with us in the years ahead. We are thankful for all that our church has meant to us.”

Since its inception, 19 different pastors have served Lutheran congregants in both Douglas and Warren. The first being Paul Lutzke from 1920-21; the last being Timothy Poetter, who served SPELC from 1999-2018.

A history of the church reveals that since the turn of the century there have been Lutherans living in Douglas, Lowell, Bisbee, Warren and the Sulphur Springs Valley. At different times the members would worship in their homes.

From 1917-1919 services were conducted in Douglas in Haas’ home. But after a short time the services were discontinued because of the distance between Douglas and El Paso.

During this time the services were held in homes, in lodge halls and in the Seventh Day Adventist church. Pastor Lutzke left Douglas in the summer of 1921.

The property on which SPLC is currently located was a gift to the local congregation by the Douglas Investment Company, James Douglas who was the president. In 1936 construction began. Much of the lumber used in the construction came from one of the mess halls of Camp Harry J. Jones which was located nearby.

Construction was completed in July 1937. It was dedicated on Reformation Day, Oct. 31, 1937. The dedication reportedly was a historic event since the entire Arizona Pastor’s Conference would be meeting in conjunction with the dedication. It is noted that 20 different Lutheran pastors and their families were here for the dedication.

Except for the erection of the walls and the plastering, the building was constructed by volunteers and members of the congregation. The building was built without the help of a Church Extension Fund loan. Funding for the project was done locally and the final payment on the debt was made to the Bank of Douglas in 1941. The Lutheran Ladies Aid Society assisted in furnishing the interior.

In May 1957 with its church membership exceeding over 100 baptised members, plans were being made to build a new church and utilize the old church as the parish hall.

In 1976 a new bell for the tower was ordered from France and installed as a memorial to Herman Stolp and Ernest Behrens. It replaced the one originally given by Mr. and Mrs. John Salem. The bell yoke and ringer were donated by Phelps Dodge.

In April 1978 a faceted art glass window depicting Christ as King, a gift from Mr. and Mrs. Otto Utke was dedicated after being installed at the church.