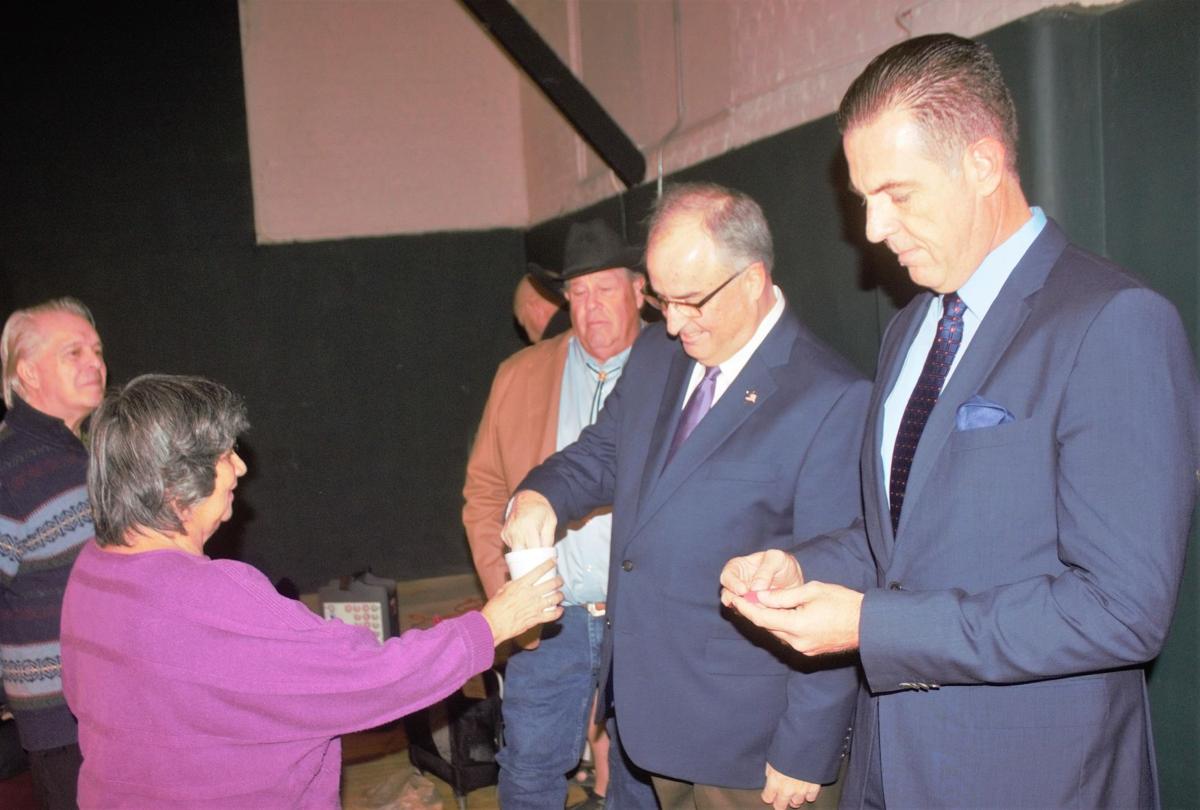 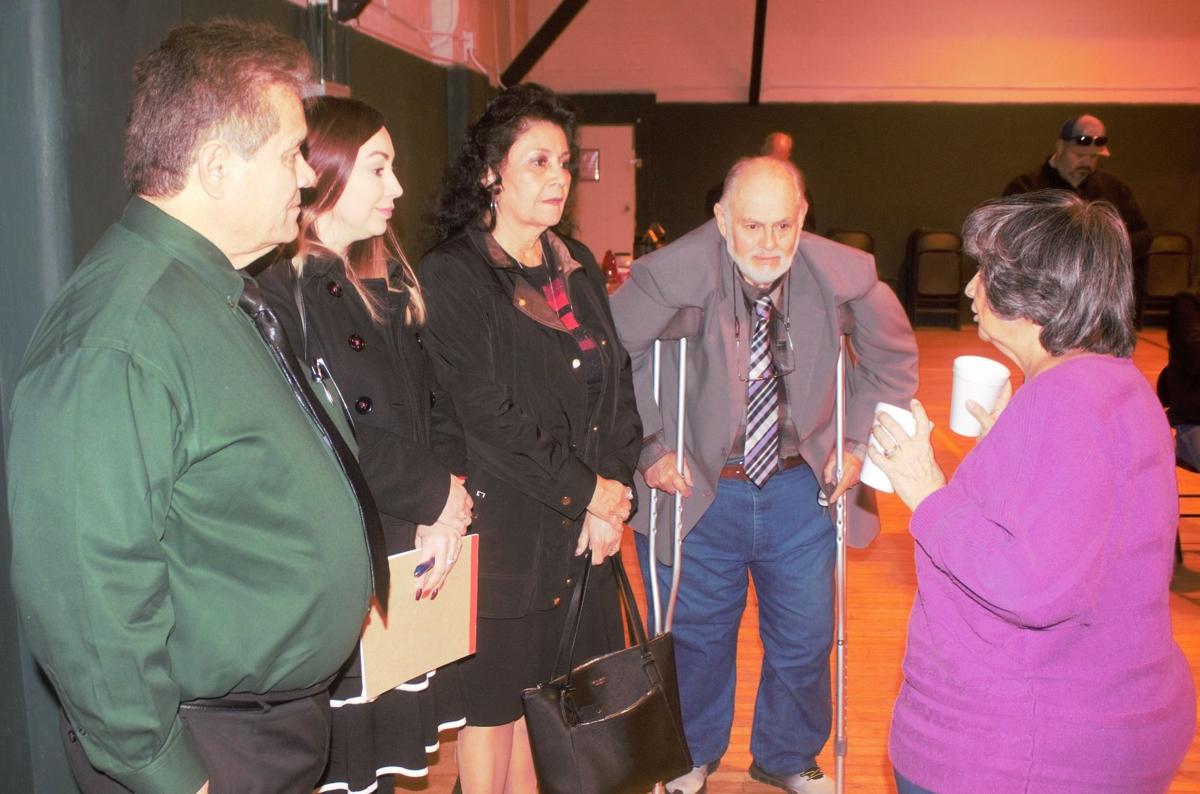 The candidates running for mayor as well as three seats on the Douglas City Council were asked some tough questions at the public debate, Dec. 16.

The debate, which was sponsored by the Douglas Conservative Club, Just Change and Step Up with Douglas took place inside the gymnasium at the Douglas YMCA and attracted only about half the size crowd that was anticipated.

All questions asked were submitted by various members in the community. None of them were edited and the candidates were not provided, ahead of time, with a list of questions that were going to be asked.

The first hour of the debate was for the mayoral candidates. Mayor Robert Uribe declined the invitation to attend, but his challengers, Donald Huish, Roberto Moreno and David Studer did attend. Many of their responses were greeted by applause from those attending the debate.

At the beginning, each candidate was asked to give a one-minute response as to what makes them the best candidate for mayor?

“Knowing Douglas, the way I know Douglas, having been born here, raised here, graduated from here, went away and got some experience; chose to come home to help the City of Douglas back in 1987,” Huish said. “My education is in public administration. I’ve spent my entire life with the aspect of wanting to serve. I believe I can have a united effect on our community. Our community has many needs, but it also has very many positive aspects of this community that need to be focused on and utilized to its fullest. With my leadership we will be able to realize the great Douglas that we all know it is.”

Studer stated he feels he is the best candidate for mayor because he knows what it takes to run a successful business in Douglas and he believes he has the tools to run the city.

“The city is a big business which needs to be run properly,” Studer said. “Being transparent with the community, which our city government is not. I’m not originally from Douglas but I have more invested in Douglas than most people which gives me insight to make sure Douglas does well because the better Douglas does, the better I do and the better everybody else does.”

Moreno followed saying he felt he is the best candidate “because of the moments we are living right now.”

“In my business these past 17 years I’ve seen how Douglas has been affected by the lack of investment and the way our government has treated potential investors coming from out of town or the inside investors from here in Douglas,” he said. “The lack of transparency, the lack of efficiency in the way they have done a lot of the work has really affected the way our community responds to each other. I think the biggest thing we need right now is to bring each other together. We need to heal from the inside. We need to make sure all of us are involved. I will be running this like my business. I will be getting involved with everything that has to do with running the city and making sure everybody is held accountable for their position.”

All three candidates were asked what they saw as priorities for Douglas and how would they work to develop those initiatives?

“The No. 1 priority I see for Douglas is to be able to involve our community more,” Huish said. “We can allow people to offer their input at city council meetings. We can offer an open line of communication for everyone. Other challenges that we have are developing a community where everyone can feel safe, happy and be able to raise their families and seek better employment. As we build and come back together as a Douglas family, we will see these things change and we will see people want to come here.”

“I feel we have neglected a lot of the assets we have around here,” he said. “We have not exploited our neighbors down south the way we should. We have a lot of things going for us here as far as companies trying to come and invest here. We need to start with our community, with our law enforcement. We need to make sure we develop a better rapport between all of us which is basically what’s missing here in Douglas.”

“The main priority I see is working better with the way we already have established,” Studer said. “One of them is working on the port that is here and operational right now. Having to sit two to three hours in line for people that are wanting to spend money in our stores. We need to figure out someway to speed that wait time up. The next thing is being transparent, letting people speak at the council meetings, holding town halls. I think the mayor’s office should hold a town hall once a month. Giving people a voice in city government is the way you start repairing what’s been torn down.”

Questions were asked about the streets, the handling of the Call to the Public at council meetings, possibly bringing a hospital to Douglas and the recent tax increase.

All three candidates did agree, they felt there was no need for a full-time city attorney and that the city manager must be required to reside within city limits.

In the city council debate that followed incumbent Margaret Morales was on hand along with her challenger Mario Ramos in the Ward 1 race.

Danya Acosta was on hand for Ward 3. Her challenger, Ben La Forge was unable to attend the debate.

Ward 5 challenger Michael Baldenegro was in attendance while the incumbent, Cesar Soto, was not.

All the council candidates expressed their opinions as to why they are the best candidate for their respective seat, what their priorities are for the city, and how they would help those go into effect should they be elected?

Much like the mayoral candidates, all four candidates agreed the city manager should reside within the city limits and three of the four stated they too felt like a full-time city attorney was not necessary for a town the size of Douglas. Acosta said she felt the matter needed to be looked into a little more before making a decision.

All the candidates spoke about the need to get our streets fixed sooner, rather than later and the need to provide better help for businesses in Douglas. They all expressed their frustration with the tax increase that went into effect several months ago.

The entire two-hour debate can be viewed on the Voice of Douglas Facebook page at: http://bit.ly/35vNGOJ.

The Primary Election will take place Tuesday, March 10. The General Election, if needed, will be held Tuesday, May 15. This will be an all-mail election again, meaning ballots will go out in the mail and will either need to be mailed into the Cochise County Elections office in Bisbee, or dropped off at City Hall.