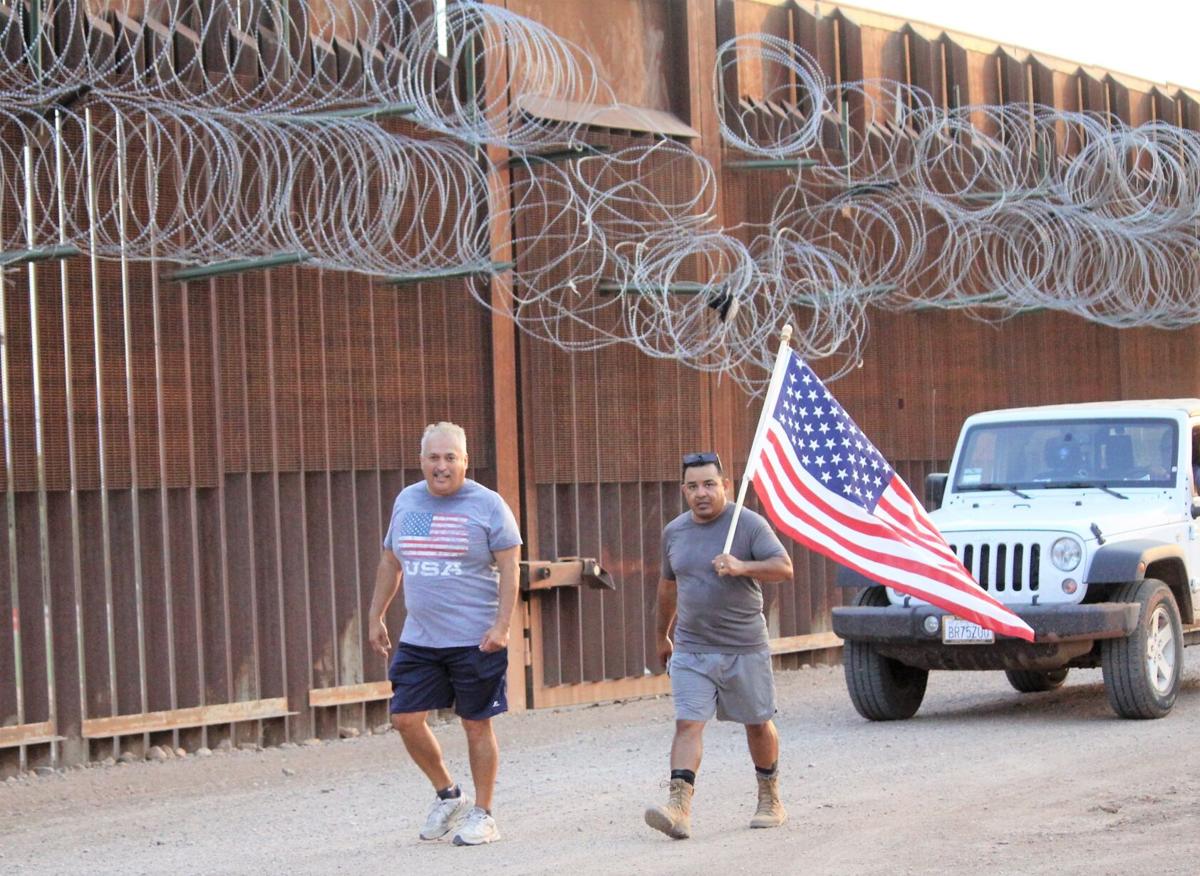 Eric Reyes and Ramon Castro walk along the U.S./Mexico border on their way to Castro Park Monday. 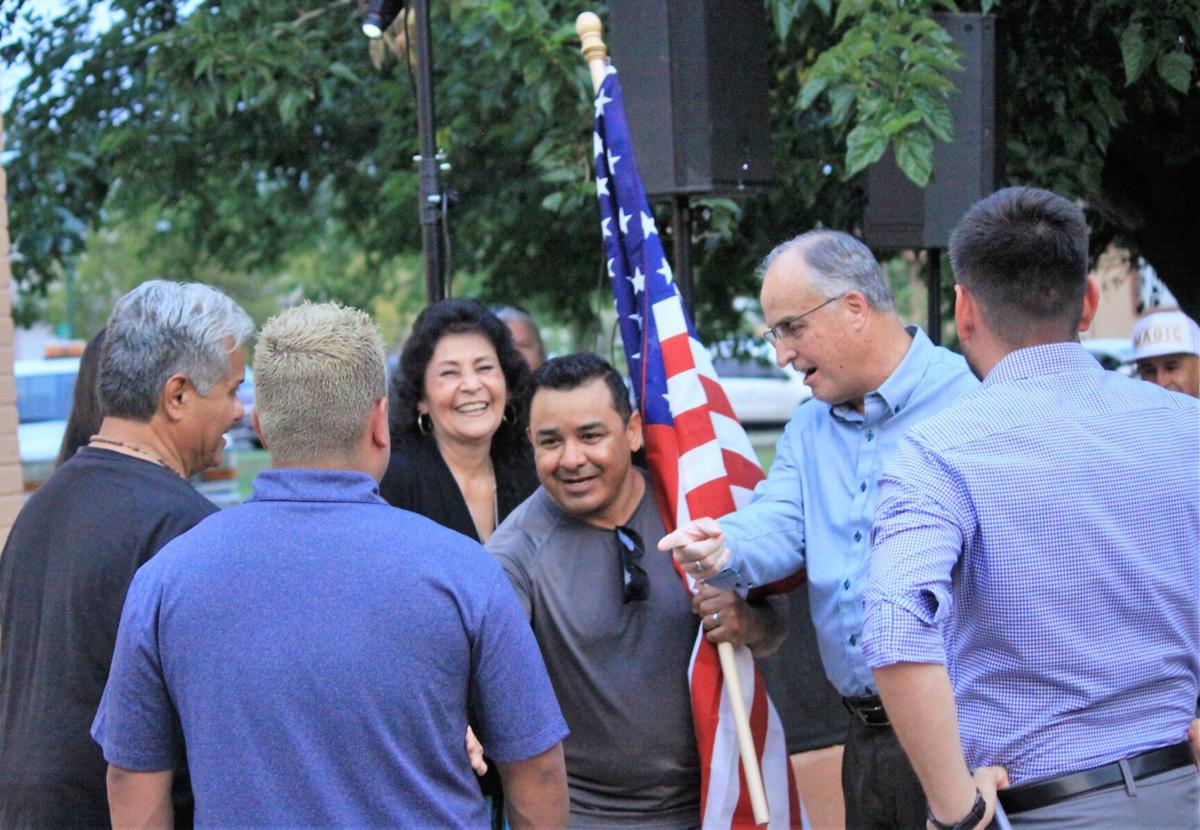 Ramon Castro, a U.S. Marine Corps veteran who has served two tours of enlistment, is greeted by Mayor Donald Huish, right, and members of the Douglas City Council Monday at Castro Park.

Eric Reyes and Ramon Castro walk along the U.S./Mexico border on their way to Castro Park Monday.

Ramon Castro, a U.S. Marine Corps veteran who has served two tours of enlistment, is greeted by Mayor Donald Huish, right, and members of the Douglas City Council Monday at Castro Park.

DOUGLAS — Sgt. Ramon Castro, a U.S. Marine Corps veteran who has served two tours, including duty in Kuwait in support of Operation Iraqi Freedom, is walking along the U.S./Mexico border from California to Texas in an effort to bring awareness to officials in Washington D.C. of American veterans who have served their country but have been deported for a variety of reasons.

Castro’s “Walk the Line” march to bring deported veterans home began Monday, June 28, in San Diego at the Pacific Ocean and is expected to end on Aug. 11, 2021, at the Gulf of Mexico near Brownsville, Texas. Castro, 42, is walking 40-50 miles a day, trying to stay along the border as much as possible.

His journey brought him through Douglas Monday where several hundred local residents, along with Mayor Donald Huish and members of the Douglas City Council, were on hand to greet him at Castro Park. Also there, putting on a mini-concert, was rapper, songwriter and producer MC Magic.

Castro was born and raised in Brawley, California and after graduating from Brawley Union High School joined the United States Marine Corps. He is a member of the Brawley City Council. He was elated when he connected Monday with Douglas City Councilwoman Danya Acosta, a Brawley native.

According to his bio on the city of Brawley website, Castro has been a community activist in support of military veteran’s issues. His work earned him the Distinguished Recognition as Assembly District 56 Veteran of the Year in 2015. Castro serves as the president of the Veterans Honor Wall Committee, executive board member of American Legion Post 60 and spearheads the annual Veterans Benefits Seminar.

Monday morning he began walking at 3 a.m. and arrived at Castro Park around 7 p.m. He provided a moving speech about his fight for veterans who have fought for our country but were deported. He spent the night in Douglas before continuing his journey the next day.

“A year and a half ago somebody told me that military veterans are being deported,” he said. “And I said ‘you’re a damn fool if I’m going to believe that’ and he said ‘I’ll show you.’ ”

Castro made a trip south of the border where he met a Marine Corps veteran who had served in the Gulf War but had been deported because he had a fight with his girlfriend and he was a “green card soldier.” That man took him over to another place in Tijuana, Mexico, where he met men in their 60s and 70s who were suffering from elements caused by Agent Orange. They didn’t have access to healthcare they earned through the Veteran’s Administration after being deported.

Castro said the man he initially met was later found dead in his front yard.

“I showed up there to support the family and pay my respects to the family of the man that had taught me so much in such a short time,” he said. “I was then asked to do something that truly embarrassed me. I am an American patriot across the board. We were asked to have a flag ceremony in Mexicali. I handed the flag over to his wife and 8-year-old daughter. It was devastating to me that I was giving an American flag to the family of an American Marine who had served in war on foreign soil because he had been deported.”

“That’s three different administrations of both political parties; it’s not a political party issue,” he said. “When I went off and served we never asked if they had a green card. We never asked about their moral background to see if they were certified to serve in combat with us. My uniform said United States Marine Corps and didn’t have an ‘R’ (Republican) or a ‘D’ (Democrat) attached to it. This is not a political issue; it’s an American issue. This is something we have to fix and we have to fix it now.”

Castro said many of these veterans were deported because they didn’t process their citizenship and they made a mistake.

“They made a mistake that many of us here have made, including myself,” Castro said. “DUI’s, domestic violence, criminal activity. You all need to understand that those of us who have served in the United States military have sacrificed so much. I sacrificed my youth, my body, my mind and I sacrificed my soul. When I came home I found out that I didn’t fit in. When I came home I struggled. I thought I was a killing machine.

“The dirty jobs that our military is asked to do are being done to protect this nation and our way of life. A side effect of that is that we come back with mental health issues. The average of American veterans who commit suicide every day is 22. This isn’t just our veterans, it’s active duty military, except the government does a much better job of hiding that.

“These men and women get out, they don’t take care of their paperwork, they slip up, they still have to do their time, they go to prison and then they’re deported. The difference between them and someone like me is that we screw it up but we get to make a comeback. They were used up, paid the price for their crime and then discarded because they were no longer any good to our nation. I have a problem with that. I think they, like so many of us, deserve a second chance.”

The American Veterans Homefront Initiative’s call-to-action outlines three clear goals and asks that the current Biden-Harris administration and U.S. Congress to take swift and bold actions on the following:

Implement, streamline the process for service members and veterans to become citizens.

Pardon all American veterans who have been deported and bring them home.

“I want to know why so many of these elected officials are turning their backs on our American veterans,” Castro said.

After his speech to the Douglas crowd Castro said his journey has been challenging, especially dealing with the heat and the change in terrain.

He was very happy to see the response he received from the community.

“I was expecting 10-15 people but never a crowd of this size,” he said. “I was very happy we were able to deliver our message.”