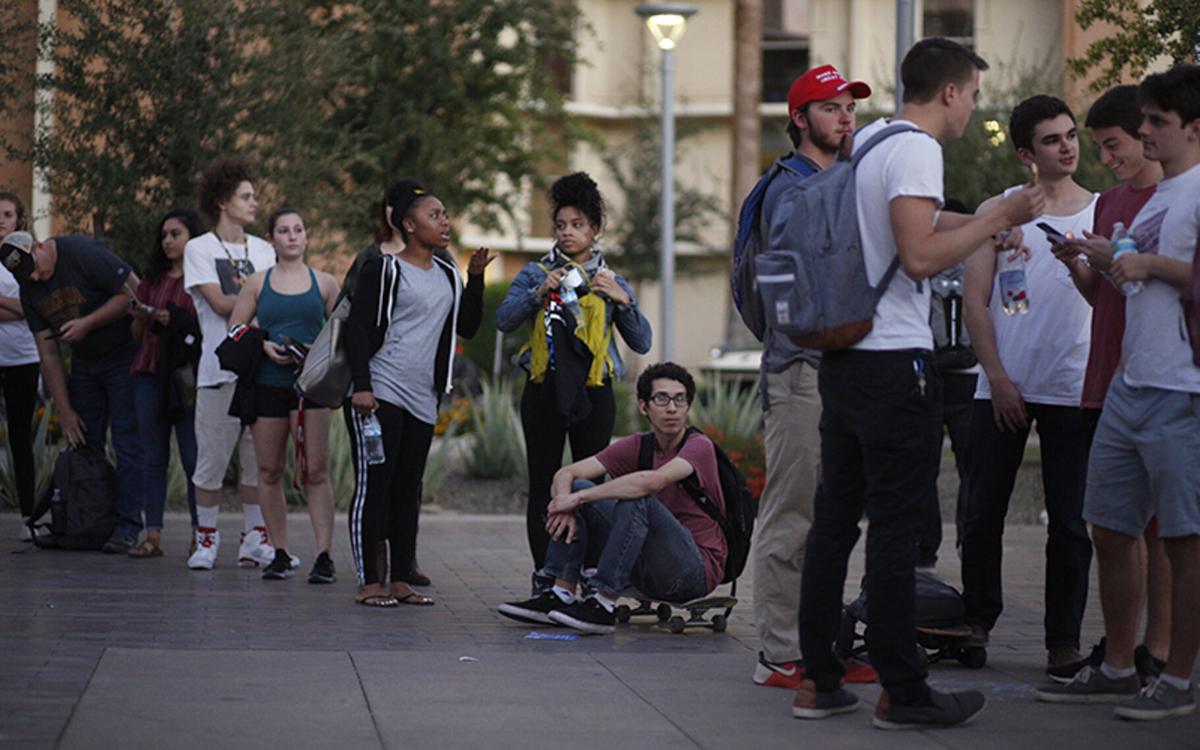 Conservative and progressive voter outreach groups are working to appeal to communities of color and young voters in Arizona who are often unpredictable in whether they turnout at the polls. Concerns over the coronavirus have forced groups to move away from face-to-face canvassing, to texting, phone calls and social media. 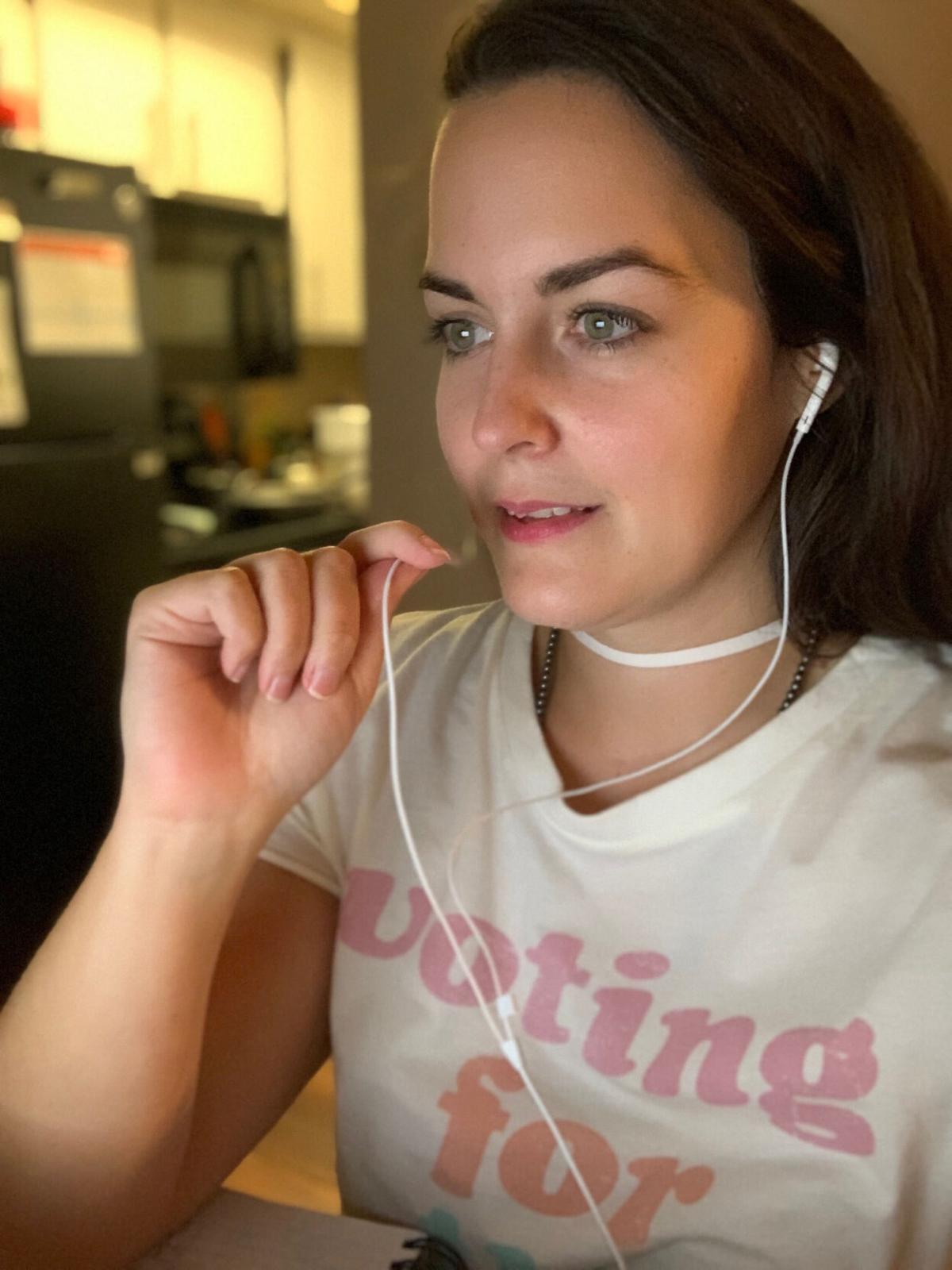 To work around COVID-19 restrictions, Progressive Turnout Project focuses on phone banking, where field representatives like Shari Griswold contact inconsistent voters – often young voters – in Arizona from home. As part of the group’s new campaign, phone calls are followed up with a handwritten note.

Conservative and progressive voter outreach groups are working to appeal to communities of color and young voters in Arizona who are often unpredictable in whether they turnout at the polls. Concerns over the coronavirus have forced groups to move away from face-to-face canvassing, to texting, phone calls and social media.

To work around COVID-19 restrictions, Progressive Turnout Project focuses on phone banking, where field representatives like Shari Griswold contact inconsistent voters – often young voters – in Arizona from home. As part of the group’s new campaign, phone calls are followed up with a handwritten note.

PHOENIX – Activists who believe young voters in Arizona have the power to swing the state are working to mobilize this often inconsistent and underrepresented group by engaging with them across all platforms – including Bumble and Tinder.

Roughly 35% of eligible Arizonans did not vote in 2016, spurring advocacy groups on both sides to galvanize young voters in the Black and Latino communities, who account for about one-third of the state’s population of 7.3 million.

“The focus on younger demographics – all across the country, but (especially) in Arizona – have certainly been sort of a unicorn,” said Garrett Archer, a former data analyst with the Secretary of State’s Office who now works for KNXV-TV (ABC15). “In many ways, Democrats need increased turnout in this group in order to have any chances in Arizona.”

In particular, the state has magnetized progressives determined to turn Arizona away from its more recent Republican leanings. Arizona’s purple turnout in the 2018 midterm election, which resulted in the state’s first elected Democratic senator since 1988, showed the potential for a Democratic presidential win for the first time in Arizona since Bill Clinton in 1996. Progressive and conservative voting groups are moving to harness inconsistent voters – those who are historically unpredictable in whether they turn out at the polls – but often vote blue if they do, according to studies and politics experts.

“Republican voters are much more likely to be habitual voters. Minority voters and young voters tend to be more liberal, tend to be more Democratic, but they also tend to not vote in every election,” said Kim Fridkin, a foundation professor of political science at Arizona State University who studies campaigns and elections.

President Donald Trump and his Democratic rival, former Vice President Joe Biden, are in a tight race to win Arizona, often trading places in polls for the top spot. The Republican Party of Arizona and other conservative groups still are working to mobilize new Republican voters, and the president has visited Arizona several times this year, including a mid-September Latinos for Trump event. His daughter, Ivanka Trump, and other administration officials also have traveled to the state.

Both parties still are using traditional campaign methods, such as in-person and door-to-door canvassing, mass calls, advertising and marketing on television and by mail.

In Arizona, progressives also plan to send 38,000 handwritten letters and postcards as part of a national strategy, and they’re moving past mainstream social media platforms, such as Facebook and Instagram, into dating apps like Tinder, Bumble and Hinge.

“I think there’s more strategy involved with young voters now than there was before – of wanting to make this change and maybe not seeing voting as the optimal option but seeing it as a tool,” said Lexy Reyelts an organizer with NextGen Arizona, a national progressive voting group with a presence in Phoenix.

The conversation starts on social media, seeking out “people of color, trans, queer people, poor people, you know, all the people who are in the margins, often, who might not have a candidate,” Reyelts said.

Reyelts, 23, began volunteering with NextGen in 2016, the first presidential election in which she could vote. She said Trump’s surprise victory helped drive fellow Latino Gen Z voters to the polls for the midterm in 2018, and it will again in November.

But organizers determined other get-out-the-vote strategies were necessary in the wake of the COVID-19 pandemic and the racial justice movements that have shaken the institutional foundations of America.

For NextGen Arizona, getting out the word meant dating apps.

Volunteers for voting campaigns nationwide – Democratic, Republican and other parties – often spend much of their shift participating in a practice called phone banking or text banking, using call lists to reach voters in the area to spread their message and solicit voter registration.

But on Fridays, NextGen also reaches out on dating apps, Johnston said, adding that many volunteers choose to continue doing so after their designated shifts. Johnston said about 20 NextGen volunteers and staffers send out continuous notifications to fellow local Millennial and Gen Z users. If the volunteer receives a match, they will start a conversation and eventually, share the group’s link to register to vote or sign their online Pledge to Vote.

“There’s certainly an overlap, that’s what makes for a lot of our interesting stories,” Johnston said. “It can be sensitive when you’re mixing your romantic life with getting people registered to vote.”

Republican and Democratic political parties are increasingly relying on social media to reach voters, even as some voters express exhaustion at the constant messaging, according to a Pew Research Center study. There is no way to know whether mass efforts like these work — at least until the election happens – and even then, it may be difficult to trace a win to specific campaign outreach.

Fridkin said to increase the chances of making a large impact with voting registration goals, the best option is to channel efforts in one place with a significant amount of traffic either online or in person.

“By and large, if it’s a non-traditional place where people don’t want to be bothered with politics, they’re not going to pay attention to it,” Fridkin said. “And I think in this election with 2020’s politics, people are sick of it.”

Johnston attributed the success of the program to being tailored directly to the demographic the group hopes to sway.

It isn’t very different from how they’ve grown up communicating in a “digital native” culture, though due to social distancing and safety recommendations surrounding COVID-19, this tactic is also necessary.

“We’re not getting that same face to face contact that we used to and it’s different but it’s certainly advantageous,” Johnston said.

Written from the heart and driven to the polls

Like NextGen, the Progressive Turnout Project, is looking beyond the traditional way of in-person canvassing to connect with voters in its efforts to elect Joe Biden for president.

In recent months, the Progressive Turnout Project has adopted a letter writing campaign where volunteers will hand-write messages to inconsistent Democratic voters in Arizona, asking them to vote.

“A personal letter in the mail really hits home,” said Brianna Westbrook, the Phoenix Metro field director. “It’s a unique way of reaching out to voters because it’s a personal approach.”

Westbrook said the voters that the Progressive Turnout Project speaks to in Arizona have an interest in political issues and the desire to make a difference, but lack either the knowledge or resources to participate in making a change.

Registration data in Arizona shows how votes are up for grabs. Total registration shows Republicans slightly outpace Democrats, with nearly equal third of registered voters remaining uncommitted to either party, according to the Arizona Secretary of State’s Office.

“Donald Trump is such a political wildcard, in every sense of the word, that anything is possible,” Archer said.