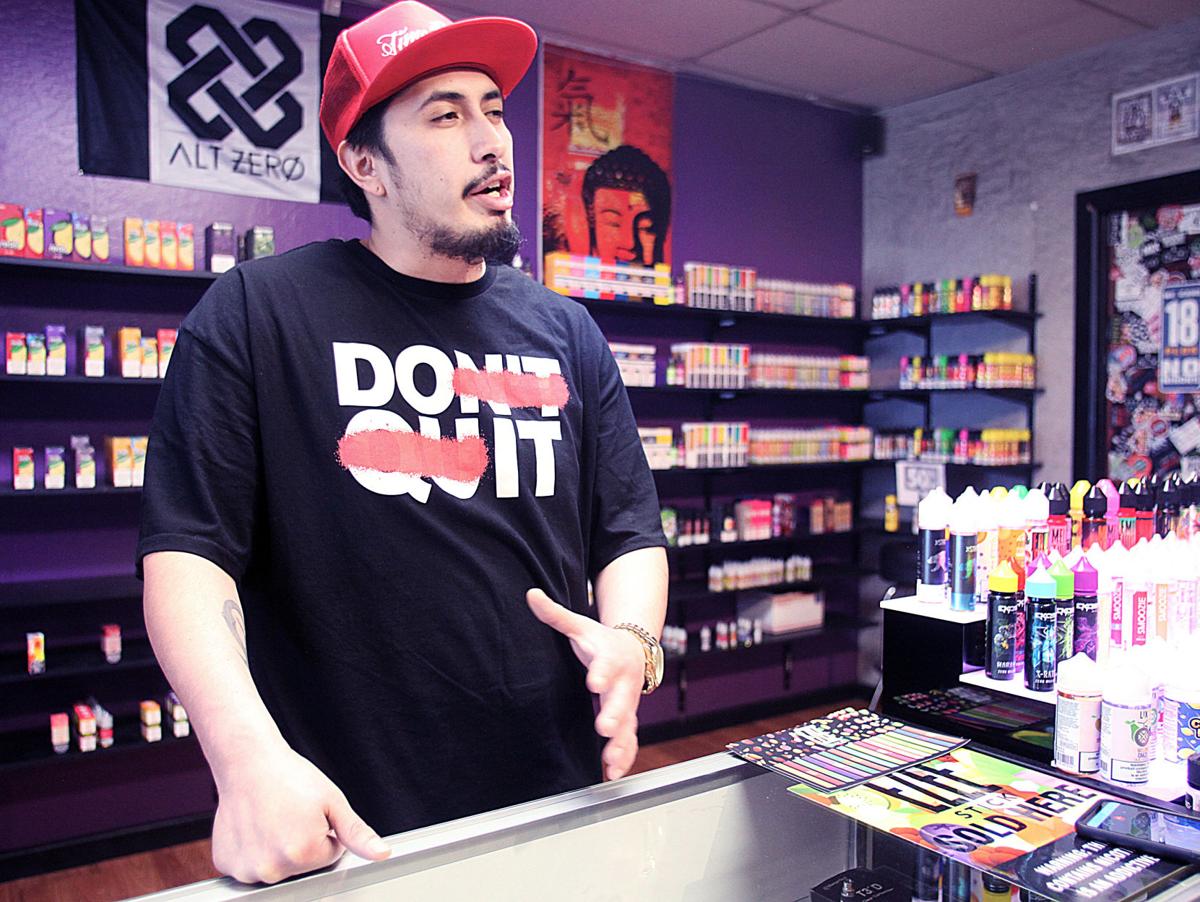 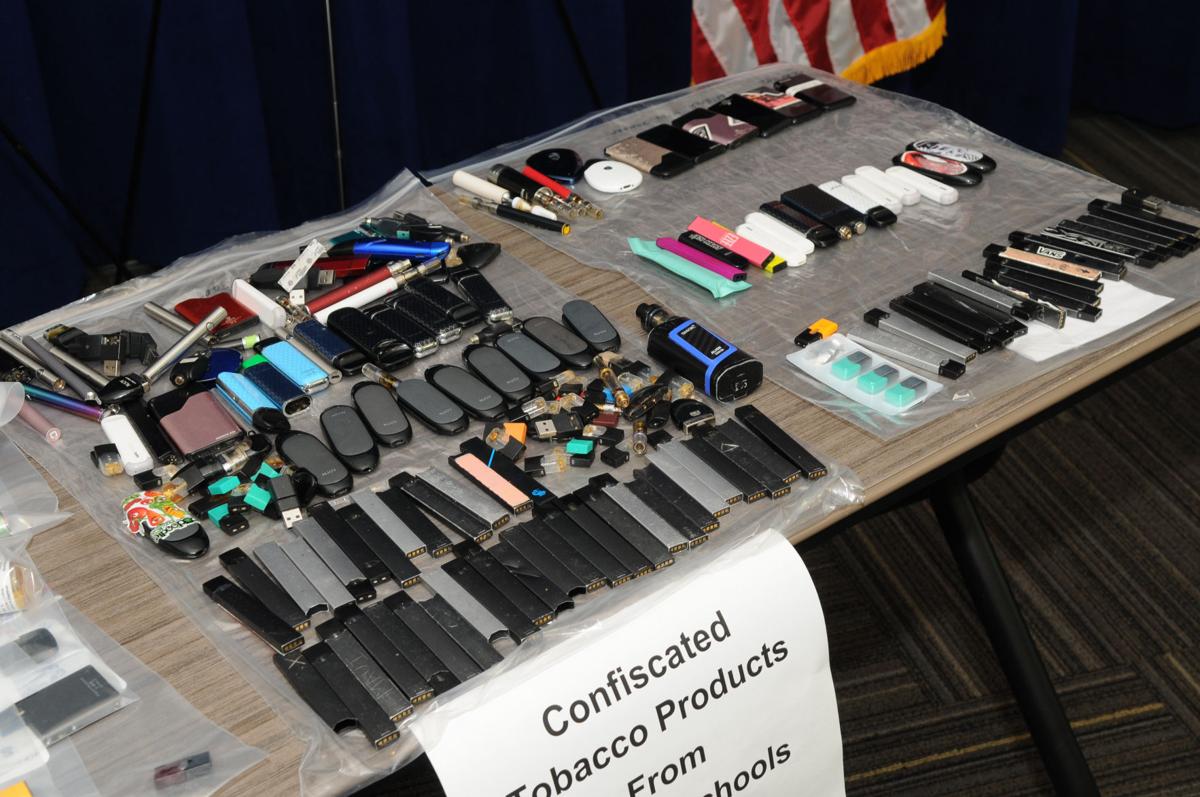 The Attorney General's Office displays some of the vaping products that have been seized at Arizona high schools from students. 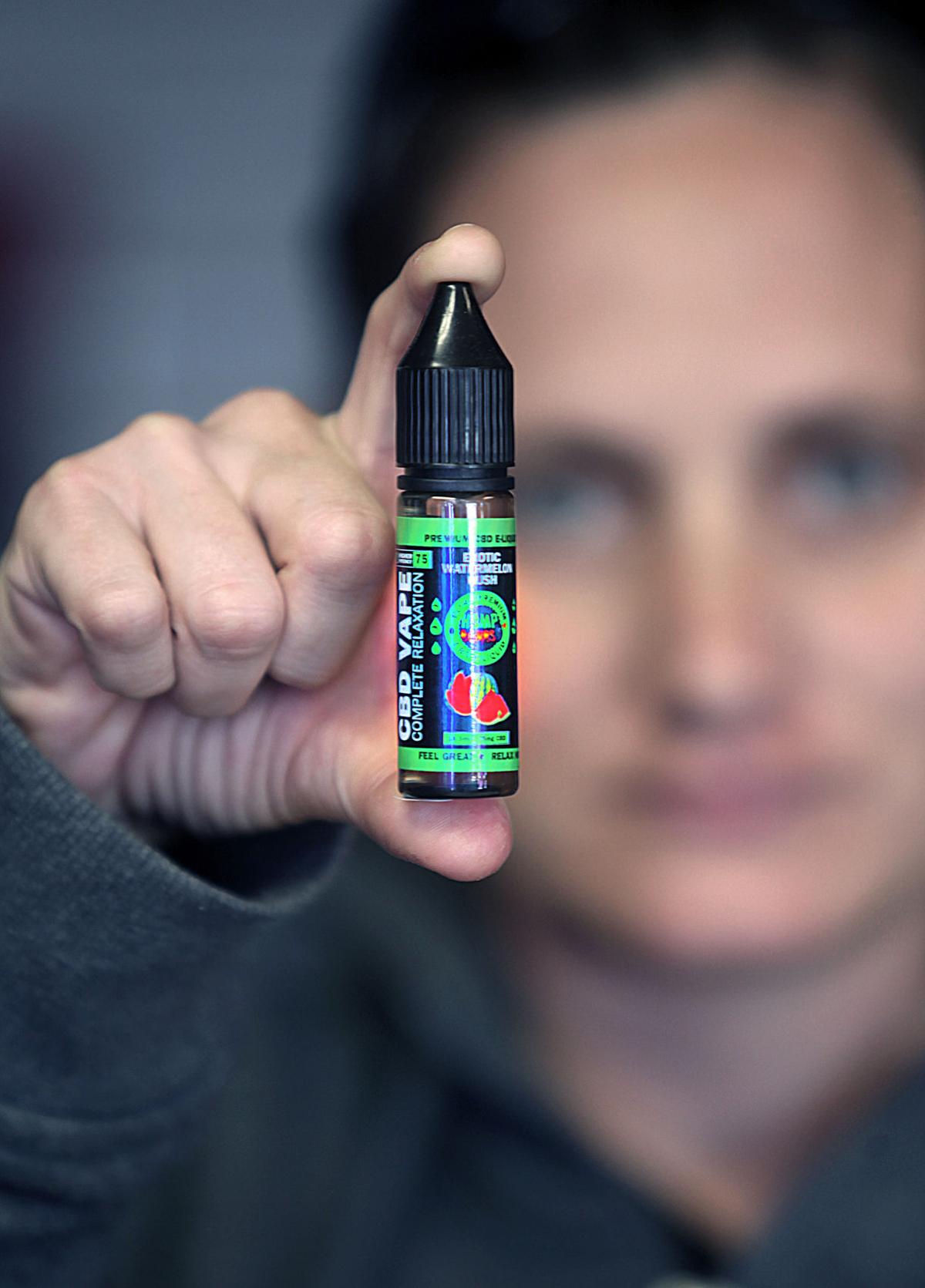 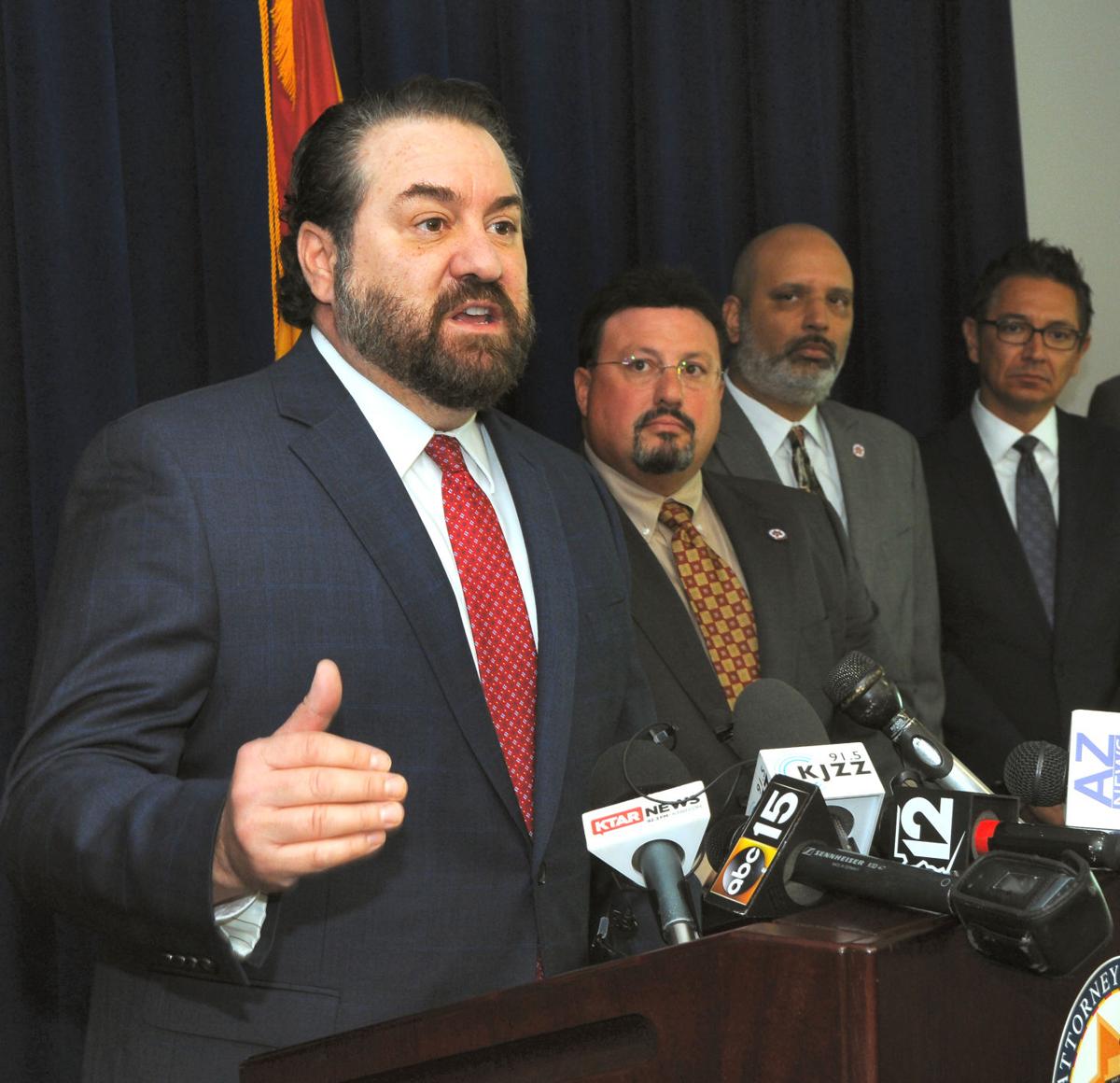 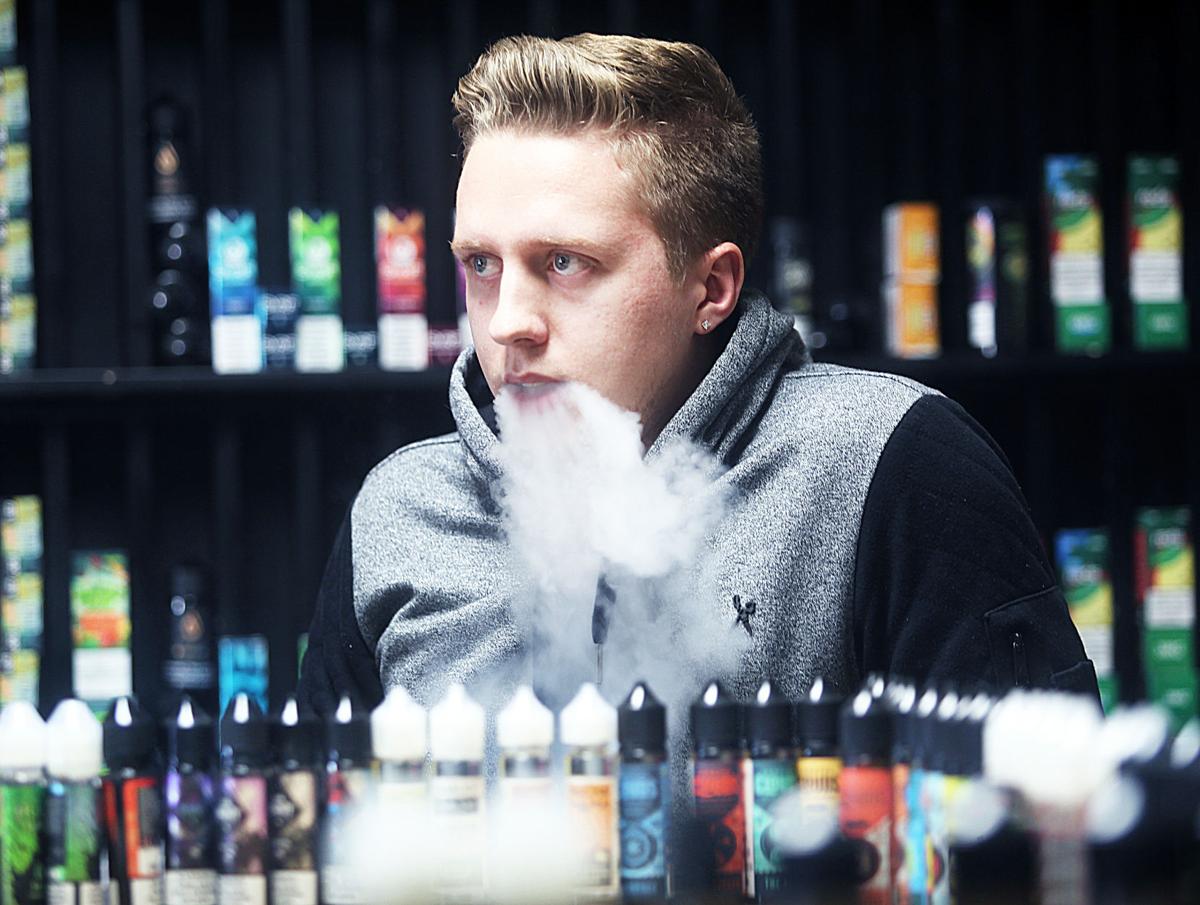 The Attorney General's Office displays some of the vaping products that have been seized at Arizona high schools from students.

PHOENIX — Attorney General Mark Brnovich filed suit Tuesday against two companies that make vaping products, charging that they have illegally targeted teens and misled consumers about the amount of addictive nicotine in their products.

Brnovich charges that Juul Labs and Eonsmoke “appealed to, targeted, and exploited a generation of youth.”

Employees and owners of local Sierra Vista smoke shops varied in their opinions of Brnovich’s claims, though one said he could confirm that one of the companies named in the suit, Juul, was mislabeling the amount of nicotine in their products.

In the case of Juul, the nation’s largest vaping firm, Brnovich cited ads that he said feature “young, attractive women in suggesting or casual and fun poses.” Brnovich also said the pods marketed by Juul dispense more nicotine than cigarettes but are designed to be less harsh, a tactic he said is aimed at getting young people addicted.

“What we looked into was, they (Juul) were saying things like it was 5 percent, which would translate to 50 milligrams of nicotine for the device, when in fact they tested them and there were some that were 70 milligrams (or 7 percent),” Casas said.

“As far as the vape shops, there’s premium juices (sold at the shops) and those are actually regulated by the FDA, so they already go through the whole inspection and whatnot so that it’s consistent. But that’s something that wasn’t regulated with Juul. Nobody was really testing for it; they were just taking their word, saying, ‘OK, it’s 5 percent.’”

For Eonsmoke, Brnovich said the company used social media accounts to find young customers. And he said the company actively marketed flavors like sour apple, pink lemonade and donut cream, which he said “any reasonable person would know would appeal to existing or potential vape users below the age of 18.”

All that, he said, is a violation of the state’s Consumer Fraud Act.

There was no immediate response from either company.

Nathan Avila, who works at Primo Vapors, 999 E. Fry Blvd. #104 in Sierra Vista, said he doesn’t think Juul or any of the other vaping product manufacturers have directly targeted teens and young people in their marketing, but acknowledged “they do make their bottles really colorful and attractive.”

“But that’s just to catch your eye,” Avila continued. “Like, ‘Oh, that might be a good juice, let’s see what this one’s all about. ... It’s kind of like the same thing with alcohol. You know, when you look at alcohol and you look at the bottle and you’re like, ‘Oh, that one’s a pretty bottle, that must be a nice alcohol, nice tasting, smooth, whatever.’”

Brandon Lange, an assistant manager at Primo Vapors, said he thinks teens might have been attracted to vaping when it first emerged as an option, but not necessarily because of marketing directed at young people.

“When it first came out, teenagers said, ‘Hey, we want to be a part of that,’ but nowadays it’s kind of settled down and it’s just those same people (who began vaping as teenagers),” he said. “They just kind of liked the style of it when it first started.”

Lange, with a wry smile, offered a simpler reason for why teens might have been drawn to Juul e-cigarettes or other similar self-contained vaping products.

“They’re small, like a USB drive, and you can hide it easily,” he said.

The lawsuits come after the U.S. Food and Drug Administration has raised the age for the sale of vaping and other tobacco products from 18 to 21, a move that several Sierra Vista smoke shop owners and employees say has really dinged their bottom line. That agency also outlawed the sale of most flavors.

“It took a very big impact on us,” said Nicole Musser, co-owner of Sierra Vista Smoke, 1 Fab Ave. “We had to shoot down, you know, tell people to go, at 19 (years old), and it just took a lot of our sales. I think 18 should be the age limit to buy.”

Brnovich acknowledged that both companies halted many of the practices cited in the lawsuit, practices he wants a state judge to enjoin the firms from engaging in in the future.

But he denied that the lawsuits — and the press conference to announce them — were simply designed to generate publicity for him and his office. And Brnovich brushed aside the FDA directive.

And even if the companies are no longer engaging in the acts in the complaint, Brnovich said the state still needs to take legal action.

“Someone has to pay the consequences for what they’ve done in the past,” he said.

That goes to the parts of the lawsuit which seek to “disgorge” the companies of profits they had made from underage Arizonans who were targeted and deceived. He also wants penalties of up to $10,000 for each knowing violation of the law.

Arizona isn’t the first state to file such lawsuits.

Brnovich said those are irrelevant — at least as far as Arizona is concerned. And in some ways, he said, it’s about money.

“If the state of, I don’t know, California sues, that’s not going to have any sort of financial impact on Arizona,” Brnovich explained.

“I want to make sure part of what these lawsuits are about is disgorging the profits,” he continued. “If you have companies that manipulate a nicotine content, didn’t disclose information, if they intentionally tried to target youths here in Arizona, I think Arizonans and Arizona families deserve some sort of compensation for that.”

He said not pursuing such a claim would be like someone whose car was wrecked by another’s liability simply being satisfied with an apology and no compensation to fix the vehicle.

“And, at the end of the day, if you don’t hold companies accountable, then you’re not going to deter other companies from doing so in the future.”

Less clear is who gets any cash that Brnovich manages to recover.

“I think at this point that’s a little premature,” Brnovich said.

“It depends on if you are able to identify individuals who have specifically been harmed,” he said. “There’s also issues of communities that have been harmed.”

He compared it to lawsuits filed by multiple states, including Arizona, against opioid makers and distributors.

“Part of the responsibility of the opioid manufacturers is to make sure that there’s restitution to the communities that are impacted by this,” he said.

There actually are other lawsuits aimed at recouping costs. That includes a nationwide class-action claim joined by several school districts, including Tucson Unified School District, that seek financial compensation to deal with rising use of tobacco vaping products.

But Brnovich said there’s a crucial difference between what he filed Tuesday and the class-action lawsuit where the various government agencies are being represented by private counsel.

“I don’t want to see plaintiffs’ lawyers enriched,” he said. “I want to see money going into the communities and the schools that have been impacted by this crisis.”

The lawsuit comes as a new fight looms at the Capitol over how extensively to regulate vaping products in Arizona.

Last year Sen. Heather Carter, R-Cave Creek, pushed a bill through the Senate to treat vaping like tobacco. That would subject retailers to the same penalties for underage sales and make vaping illegal in public places, restaurants and buildings, just as it is for cigarettes.

But that bill faltered in the House, which backed a plan by Rep. John Allen, R-Scottsdale, who proposed a whole separate regulatory scheme for vaping. While it would have raised the age for purchase to 21, it also would have precluded local governments from enacting stricter rules, including licensing requirements and criminal penalties for sales to minors.

A similar battle looms when the Legislature reconvenes later this month.