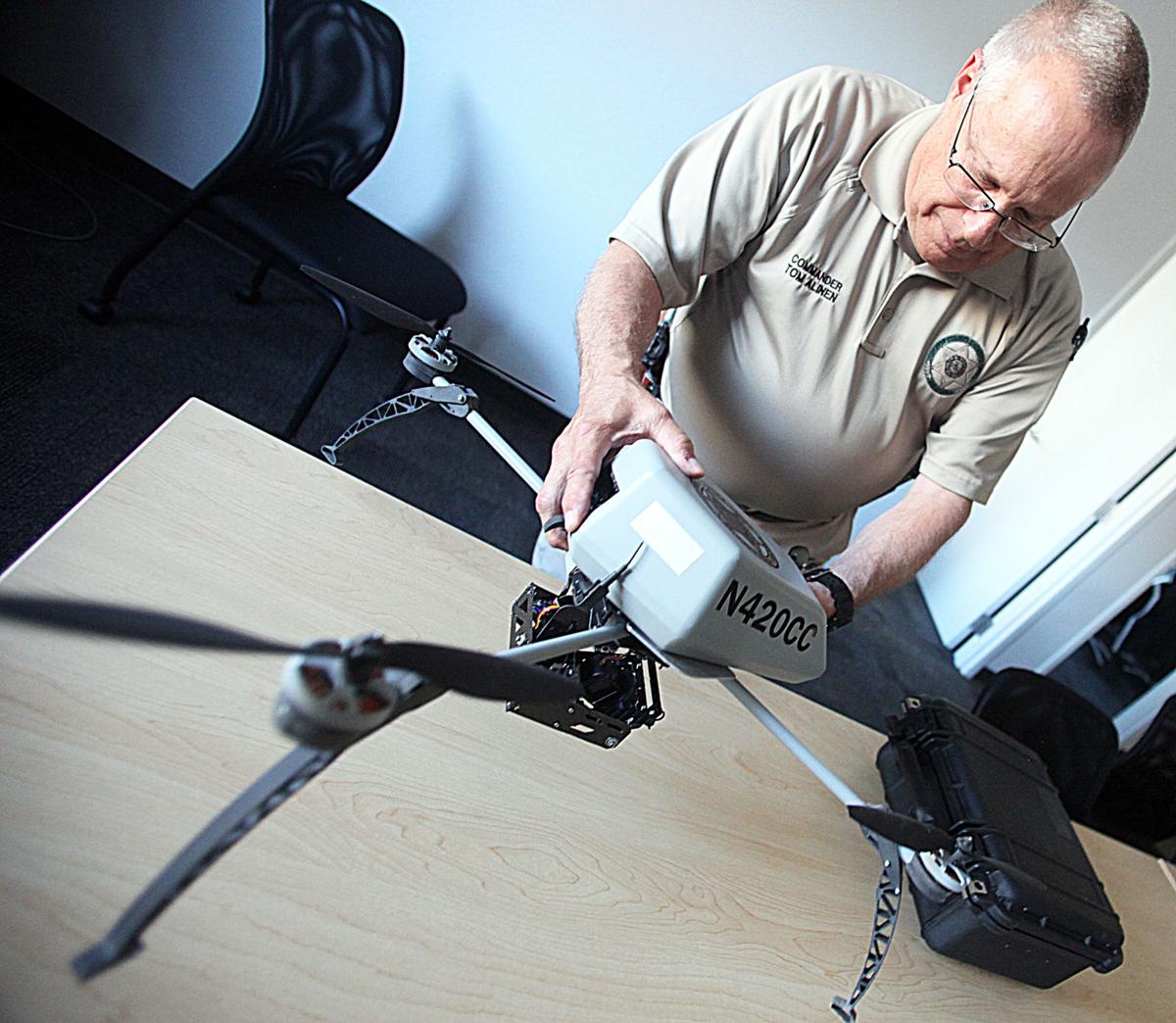 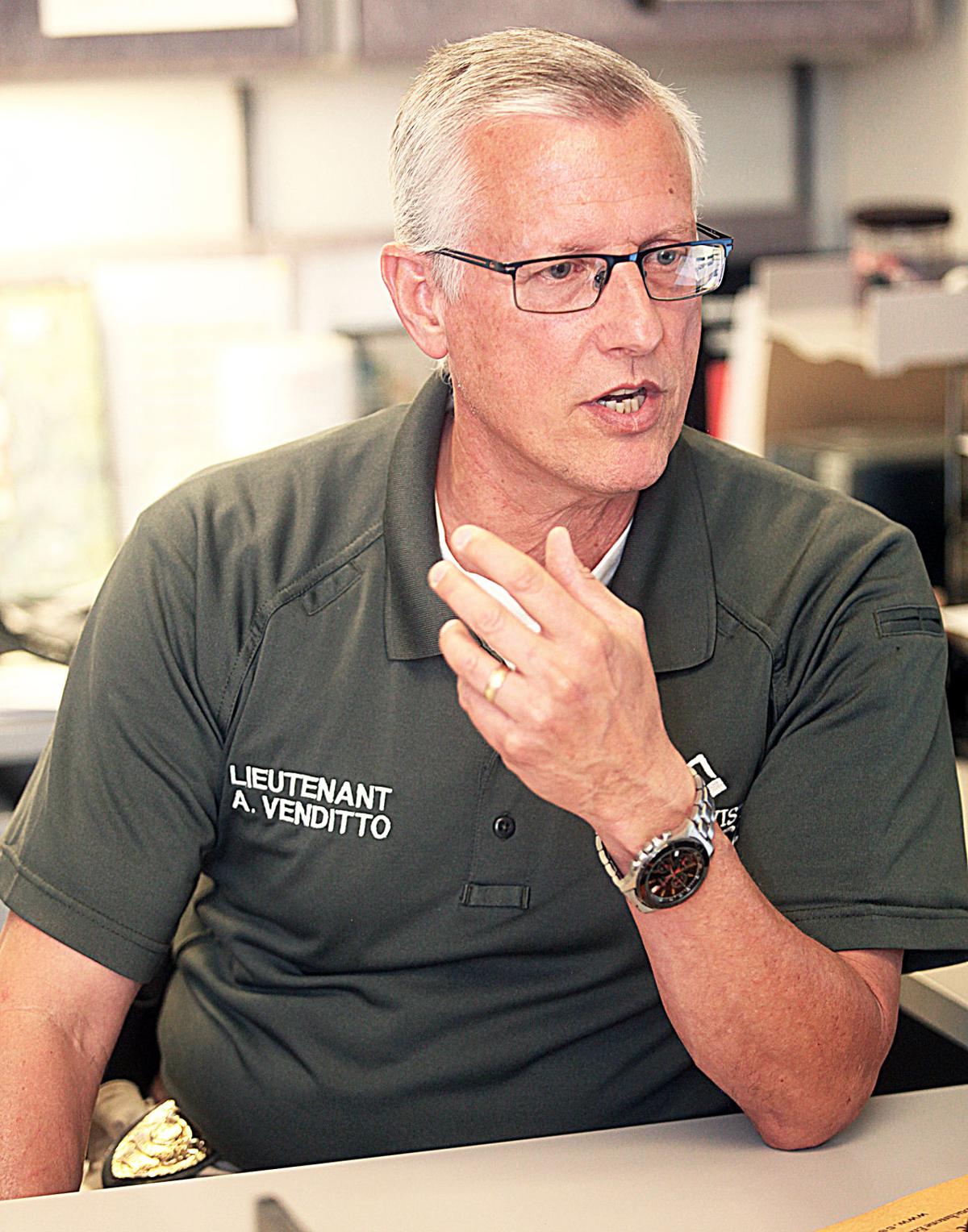 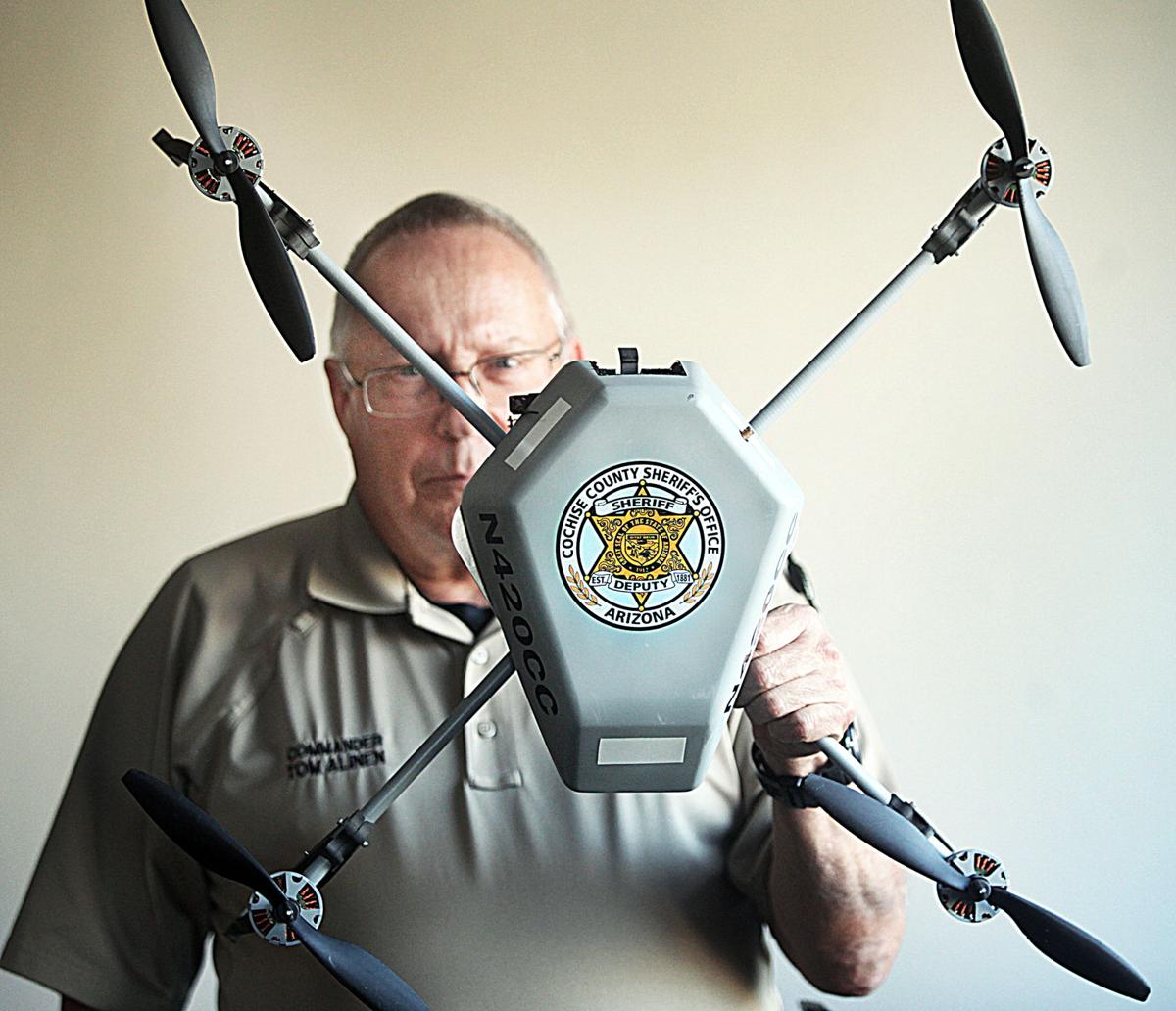 Tom Alinen, a Cochise County Sheriff’s Office support services commander, displays one of the department's small unmanned air systems. The CCSO started its drone program four years ago. Now the Sierra Vista Police Department is hoping to introduce its own into field operations later this year, once it secures grant funding. Lt. Anthony Venditto believes initial costs will range anywhere from $4,000 to $5,000 for drone equipment alone, not including officer flight-training and testing.

Tom Alinen, a Cochise County Sheriff’s Office support services commander, displays one of the department's small unmanned air systems. The CCSO started its drone program four years ago. Now the Sierra Vista Police Department is hoping to introduce its own into field operations later this year, once it secures grant funding. Lt. Anthony Venditto believes initial costs will range anywhere from $4,000 to $5,000 for drone equipment alone, not including officer flight-training and testing.

SIERRA VISTA — The Sierra Vista Police Department could be looking at crime from a new perspective later this year.

Venditto expects the department will purchase its first drone this July, once he locks in grant funding.

Venditto believes initial costs will range anywhere from $4,000 to $5,000 for drone equipment alone, not including officer flight-training and testing.

Once the drone is purchased, Venditto said he and other SVPD officers selected for the program will start training for their pilots’ licenses and implement the drone later in the year.

But starting a drone program isn’t easy, Venditto said. It’s a long, arduous process to get operations off the ground — literally.

Officers have to go through extensive training to receive their Part 107 pilot’s license from the Federal Aviation Administration to legally operate a drone. They also have to be cautious of airspace like the area about Fort Huachuca and other restricted spaces.

“When you start a program like this, it’s essentially as if you have a helicopter in your back parking lot,” Venditto said. “It’s almost the same type of regulations for a small UAS.”

The drone program is one part of the department’s two-year strategic plan, Venditto said. The goal of the program is to implement innovative technology into department operations and help make an officer’s job easier and safer.

As the coordinator for the Arizona Child Abduction Response Team, Venditto said drones are capable of a variety of missions, including missing-persons operations.

“If we have initial responding officers who happen to be trained as a pilot and have a drone in their vehicle … instead of sending out cars and driving down each street, which takes time, we can go ahead and send the drone up into the sky,” he said. “You can pick up an entire neighborhood in one shot, and you can move pretty quickly.”

Drones help keep officers safe by giving them a bird’s-eye view to any scene, Venditto said.

When an officer responds to a traffic incident, they typically have to make a diagram of the scene, which puts officers near moving vehicles. Instead of sending an officer to diagram the scene, SVPD will be able to deploy a drone with a camera attachment overhead and take the officer out of harm’s way.

“We can just throw the system in the air and it’ll take pictures of everything,” he said. “It can capture a diagram for us so the officer never has to step out of the roadway.”

Venditto said drones can help keep the community safe during police pursuits. If a suspect takes off on foot or in a vehicle, officers can deploy a drone to get a better view of the situation and keep law enforcement a few steps ahead.

“Say there’s a felony suspect who might have committed an armed robbery and is on foot, running,” Venditto said. “We can throw the drone back up in the sky and give us a good perspective.

“We can locate that suspect, and direct officers to the area and create a perimeter around that suspect and give commands.”

Drones are a growing technology in professional sectors across the board, including law enforcement.

“We use it for any kind of critical event,” he said. “We use it for jail security. We can check security on the roof and the perimeter. It gives a whole different perspective.”

The sheriff’s office also loans the drone to other first responders in the county, like fire departments. When fire teams need a better look at a blaze, Dannels said they can use the drone to see the fire from the sky.

For large-scale operations, the sheriff’s office uses its helicopter, but a drone allows quick and close-range access to any emergency situation.

Dannels expects his department to continue its drone operations in the future, and plans to upgrade to newer drone technology.

“We are in the process of transitioning to a new, upgraded drone because ours is down right now,” Dannels said. “It’s just another tool for law enforcement, and keeps the officers safe.”

Once SVPD buys its drone, Venditto wants to eventually invest a thermal camera for night missions when funding becomes available. He said he hopes a drone can help prevent officers from getting into potentially deadly situations similar to one he found himself in when he was a detective.

“Many times, there would be situations at night where people flee from us and they would hide in the pitch darkness,” he said. “I’ve come close, myself. A guy was hiding on the ground, and the only reason he didn’t shoot us was because the gun jammed. He could’ve gotten us easily. … So instead of us going out to locate an armed suspect like that, we can just throw it (the drone) up in the sky and find him.

“The biggest thing is safety.”