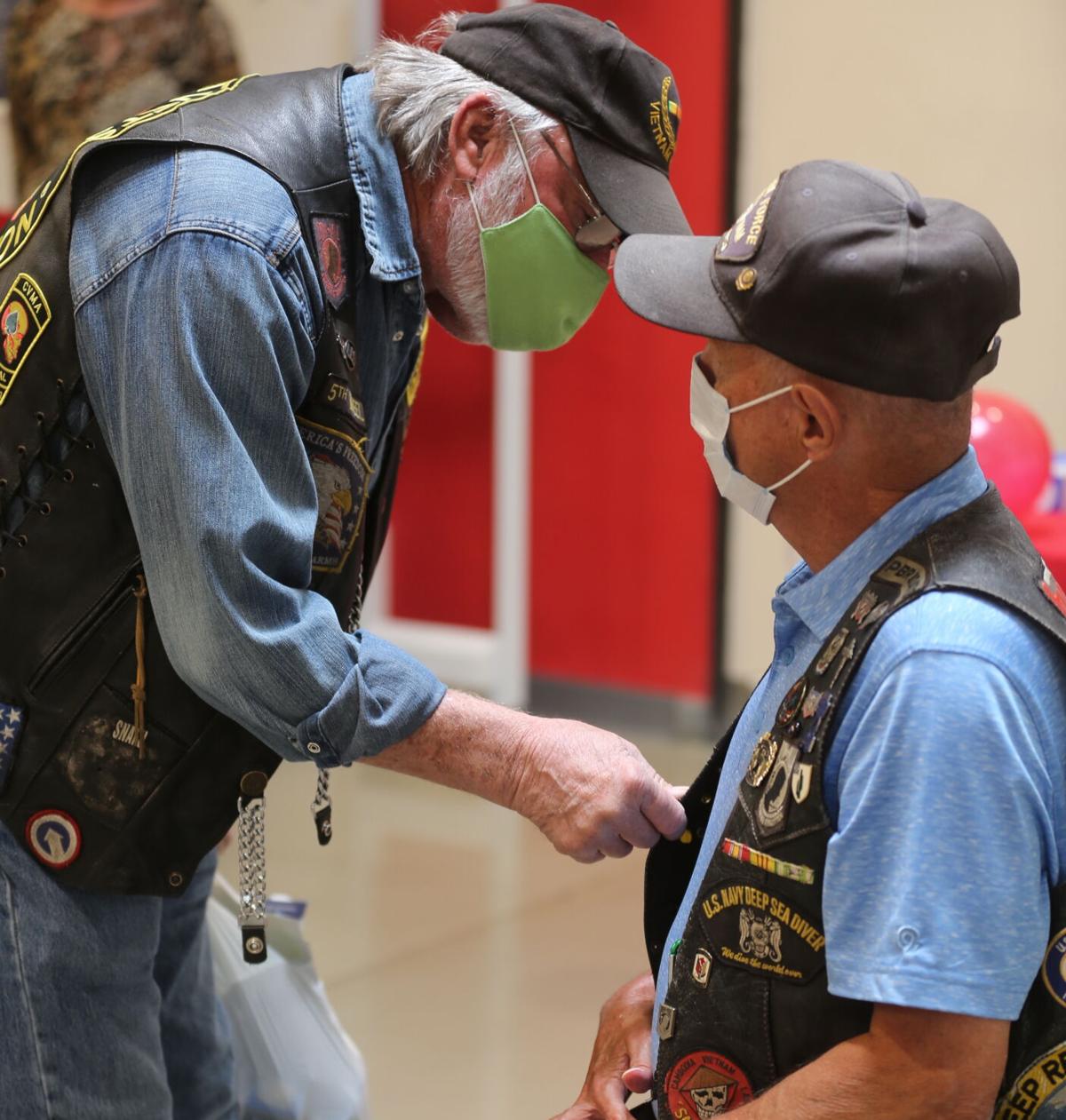 Don Alexander, an Army veteran, examines a pin on the vest of Navy veteran Patrick Porter. After chatting for a bit they connected after finding out they have a mutual friend from the service. 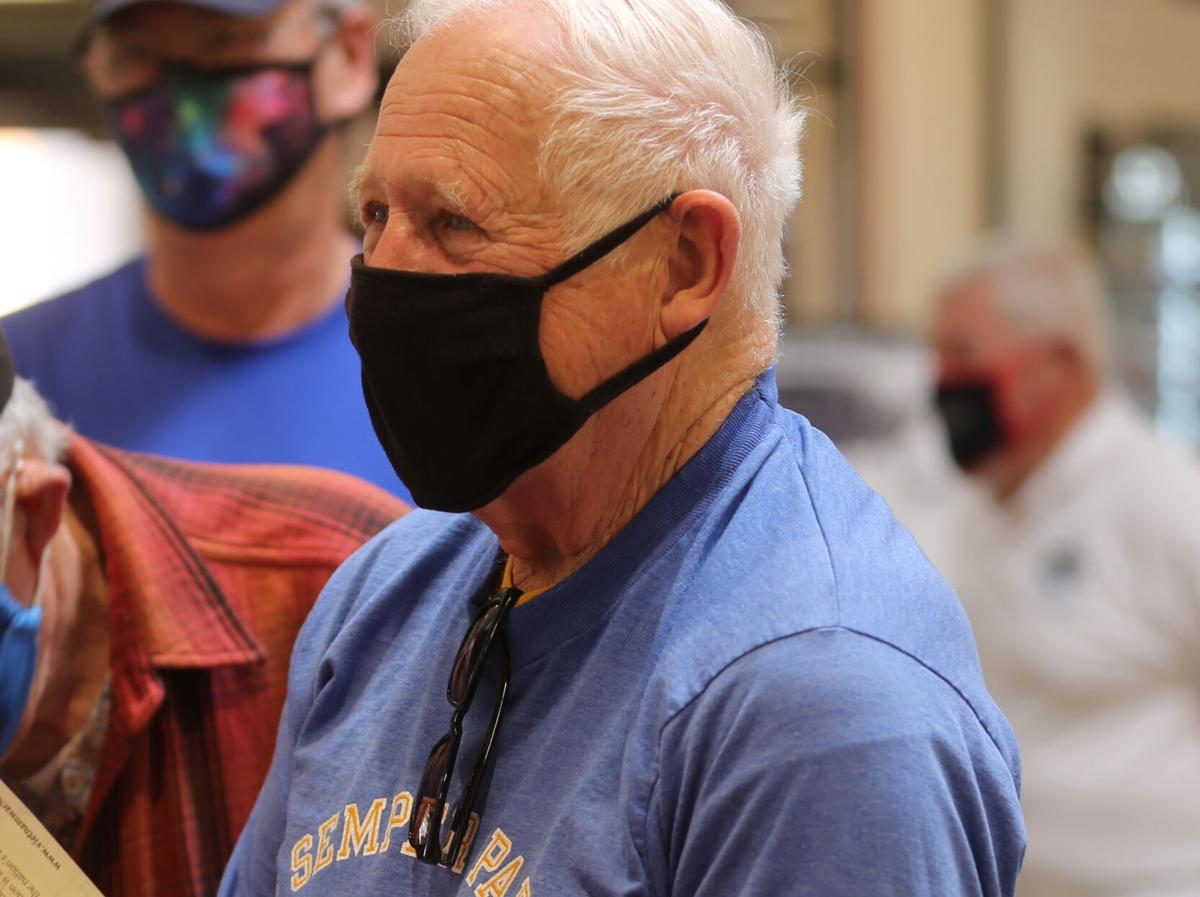 Sonny Milloy did two tours in Vietnam during his service. 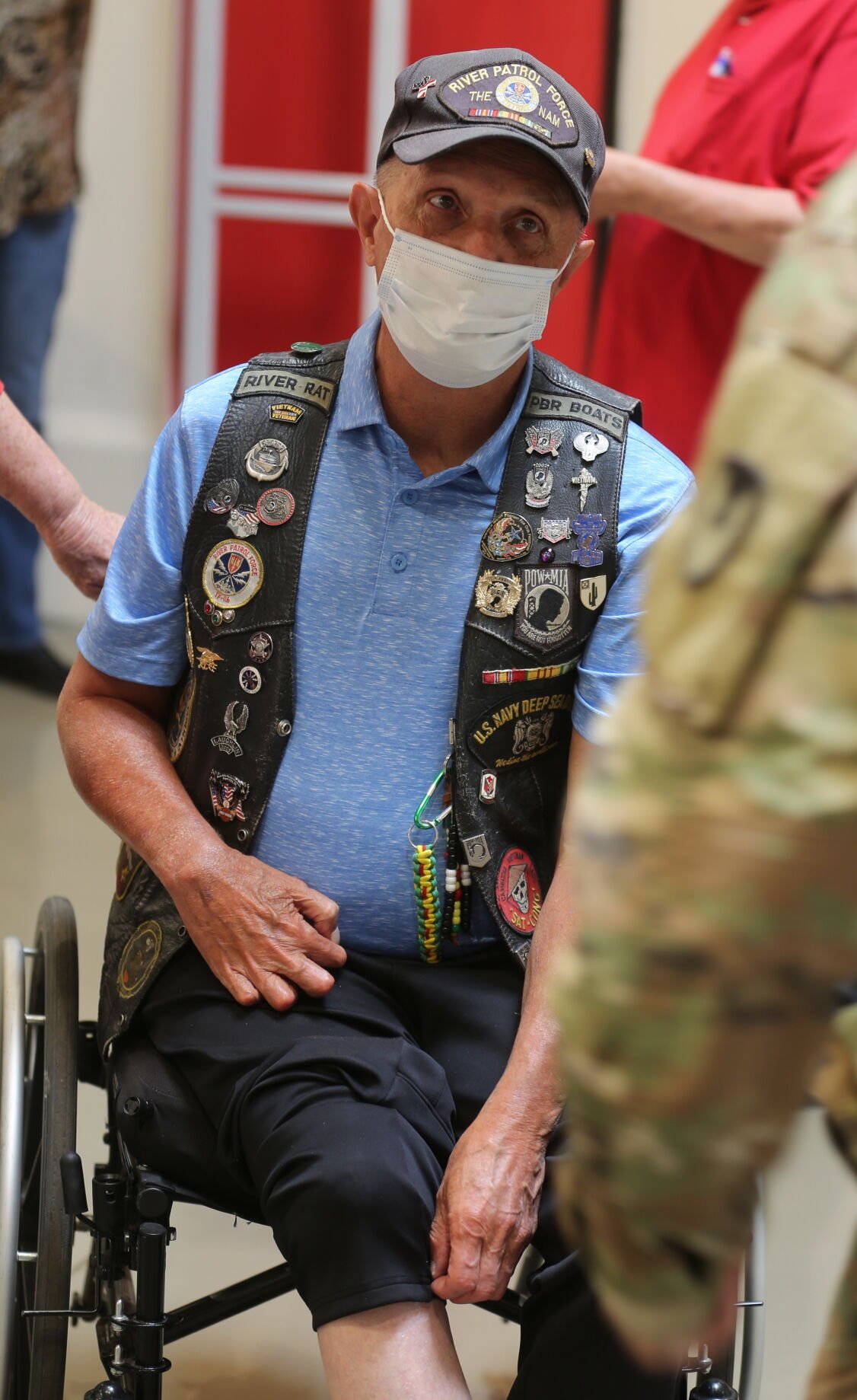 Patrick Porter was part of the River Patrol Force, also known as the '"River Rats," during his service.

Don Alexander, an Army veteran, examines a pin on the vest of Navy veteran Patrick Porter. After chatting for a bit they connected after finding out they have a mutual friend from the service.

Sonny Milloy did two tours in Vietnam during his service.

Patrick Porter was part of the River Patrol Force, also known as the '"River Rats," during his service.

FORT HUACHUCA — They were shunned when they came home decades ago, but on Monday they were thanked and recognized for their service in the Vietnam War.

In the lobby of the Post Exchange at Fort Huachuca, a handful of Vietnam veterans gathered to receive commemorative pins honoring their service in the Vietnam War. The event marked National Vietnam War Veterans Day and was celebrated in commissaries at military installations across the world, said Jeff Hyatt, general manager of the PX on Fort Huachuca.

“It’s our chance to welcome our Vietnam veterans back home since they didn’t get the welcome that they should’ve gotten when they came home,” Hyatt said.

For retired Marine Larry Andrews, Monday’s honor was the only one he’s ever received since fighting in Vietnam in the late 1960s.

“When we came back we were treated like scum,” the 73-year-old Andrews said. “I was very upset about it. This is the first real recognition we’ve had.”

Ditto for Air Force veteran Patrick Porter, who is also 73. Porter, who suffered a stroke over 10 years ago, cannot speak, but his wife Linda Porter echoed the sentiments shared by Andrews.

“I think this really good. When they came home they were not recognized,” she said.

A few seconds later, Fort Huachuca Garrison Commander Col. Jarrod Moreland approached Porter, who is in a wheelchair, and thanked him for his service.

Moreland, who said he was born in 1974, just a year before the Vietnam War ended, said he is grateful for the path paved by those who fought in Vietnam.

The Vietnam War raged on in various forms between 1954 and 1975. The lapel pin handed out on Monday, accompanied by a letter of appreciation from the president, was offered to veterans who served on active duty in the U.S. Armed Forces at any time from Nov. 1, 1955 to May 15, 1975.

Moreland said it’s key to recognize those who fought in Vietnam and the challenges they faced upon their return from the conflict.

“We have to remember that in the ‘60s and ‘70s when these individuals served, the average support from the average American in the country at large wasn’t the same as what we get to enjoy today,” Moreland said. “So to be able to be out here today and say thank you for your service, we do remember, we do appreciate your sacrifice.”

Veterans who spoke to Moreland shared how they were rejected by society when they came back to their respective communities. The garrison commander said hearing their accounts impacted him, as well.

“Not only does it make me emotional, but it makes me extremely thankful for all they did to set the stage and all their advocacy in the years and decades since, so they helped ensure that soldiers like myself didn’t have to endure what they went through,” Moreland said.