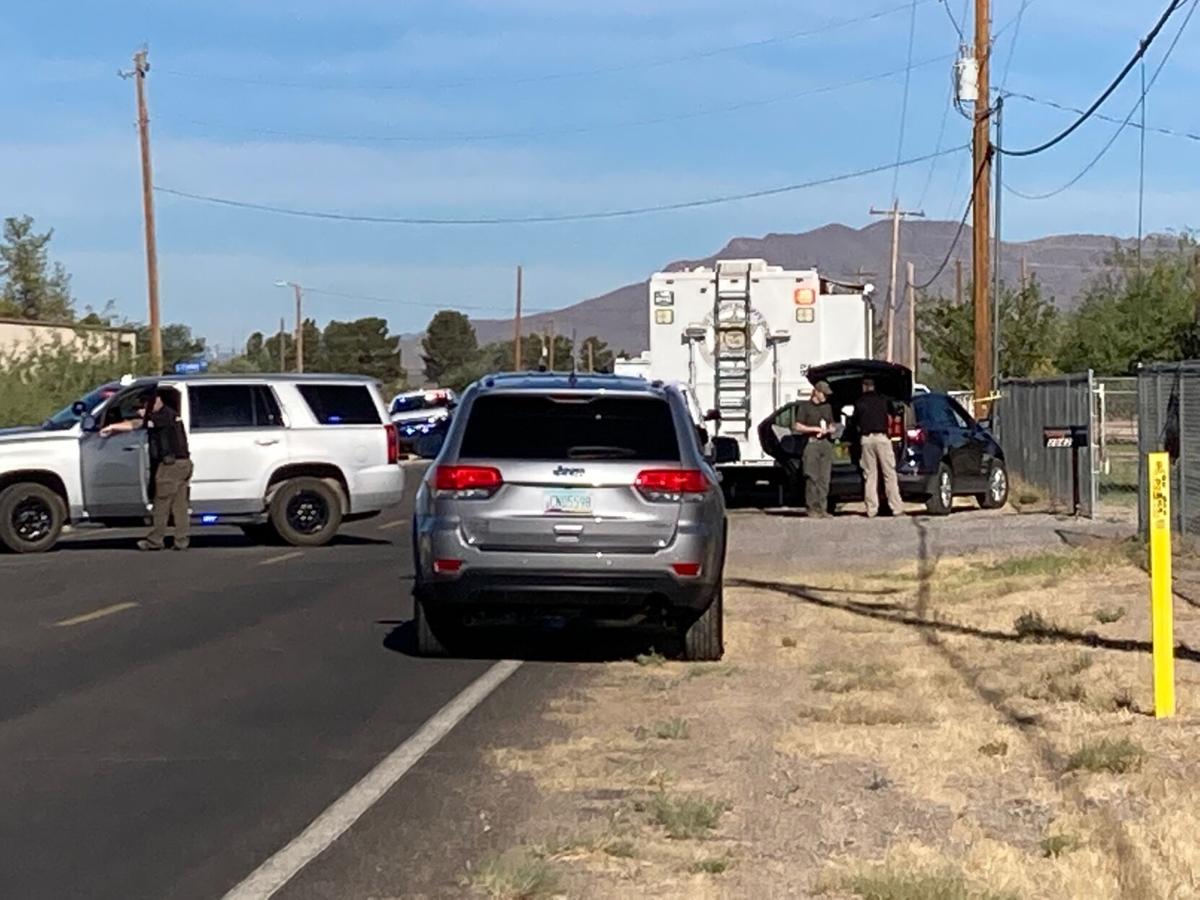 Officers appear to search a vehicle victimized by a suspect who fled on foot from a high-speed freeway pursuit. 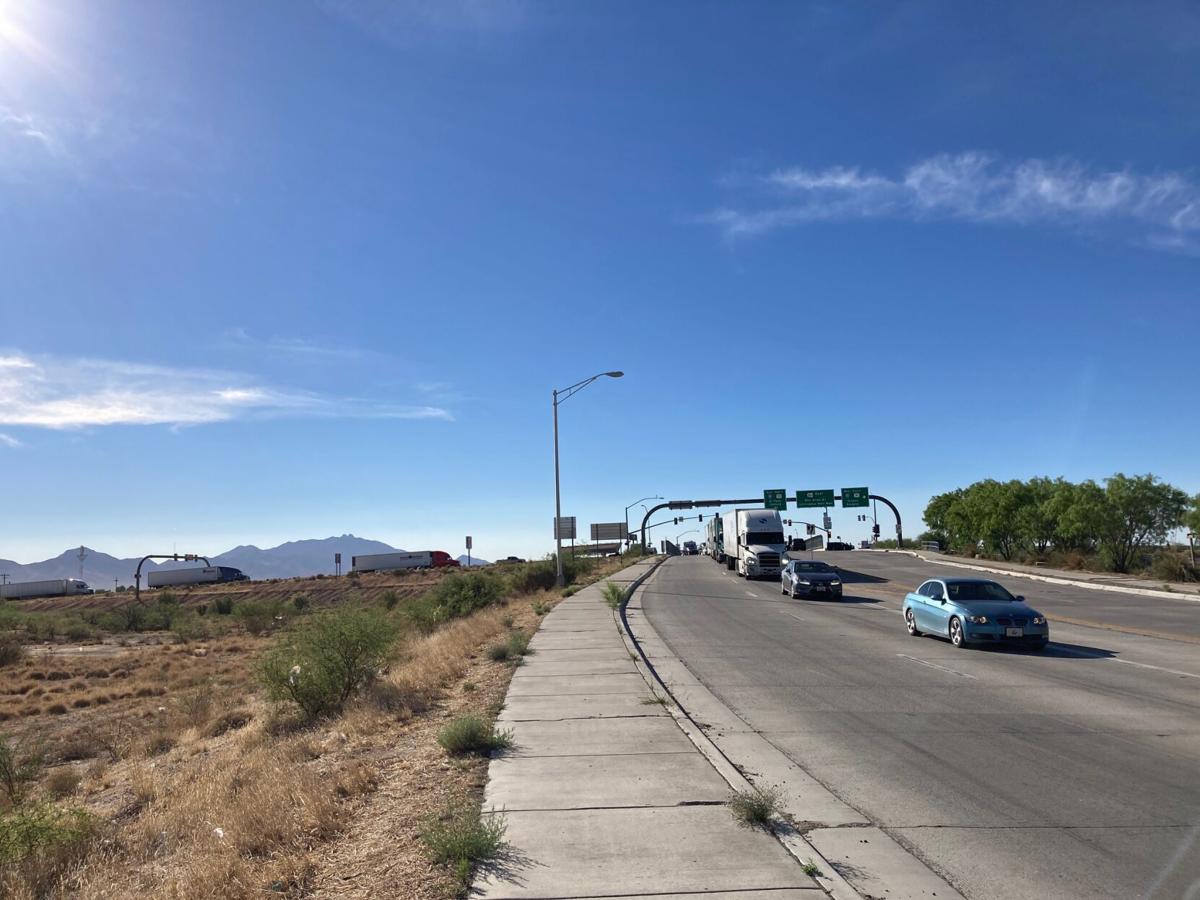 Freeway traffic is diverted onto the Exit 340 ramp during an interstate closure caused by an investigation into the high speed pursuit this morning near Willcox. 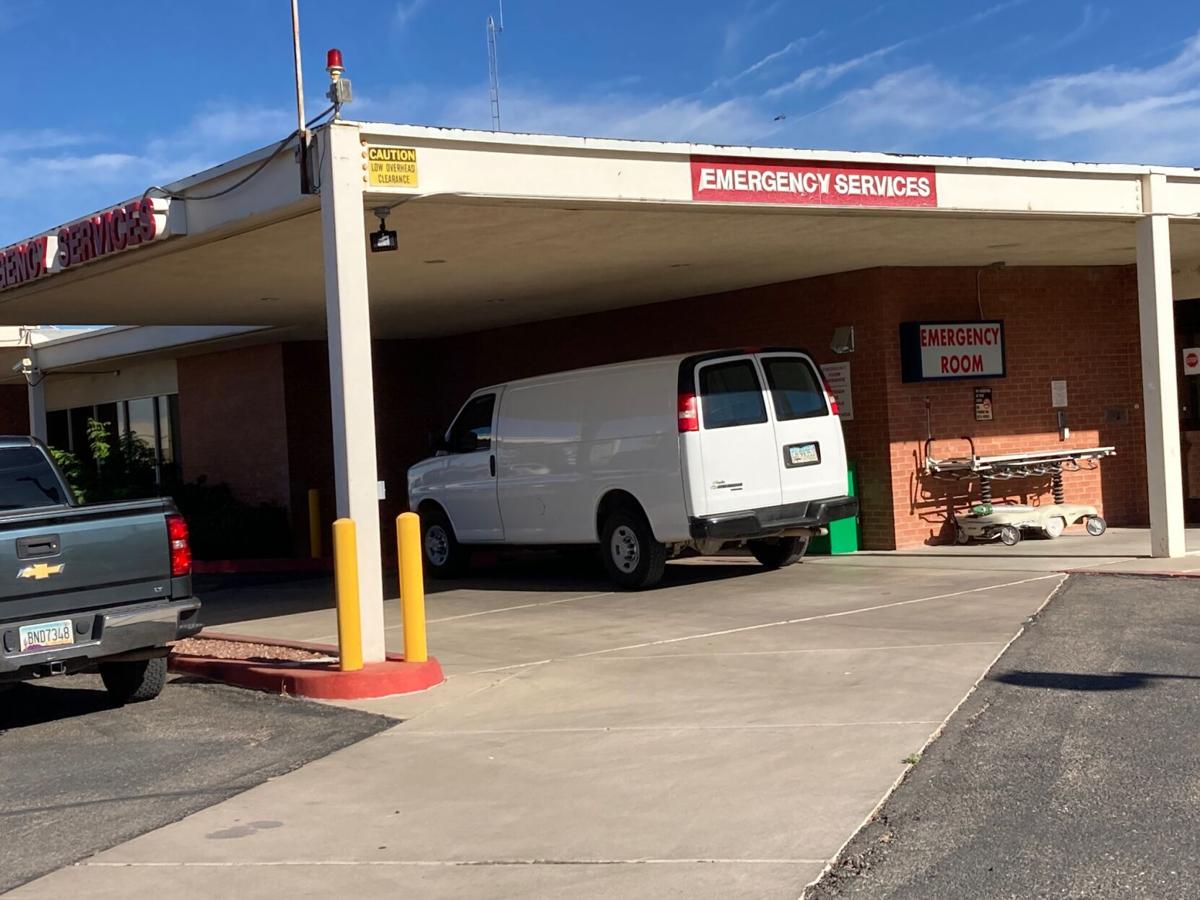 An empty gurney sits at the doorway of the hospital emergency room this morning as a converted van/hearse vehicle is parked nearby. The shooting victim was treated in the emergency room.

Officers appear to search a vehicle victimized by a suspect who fled on foot from a high-speed freeway pursuit.

Freeway traffic is diverted onto the Exit 340 ramp during an interstate closure caused by an investigation into the high speed pursuit this morning near Willcox.

An empty gurney sits at the doorway of the hospital emergency room this morning as a converted van/hearse vehicle is parked nearby. The shooting victim was treated in the emergency room.

WILLCOX — Three local men were stuck in the middle of a fugitive situation early Thursday morning that resulted in them witnessing the death of a man in an officer-involved shooting.

Ten to 11 shots were fired, according to eyewitness accounts, as the fugitive suspect attempted to re-enter a house on Airport Road in Willcox owned by Joseph Bracamonte, 30.

“At 3:11 a.m., one of our DPS troopers initiated a traffic stop on a speeding vehicle that was westbound on I-10, milepost 378 near Bowie, clocked doing 111 miles per hour,” said Public Information Officer Sgt. Jimmy Chavez of the Arizona Department of Public Safety.

“He called in the pursuit and requested assistance from Willcox PD, who set up spikes at milepost 344,” Chavez continued. “Successfully spiked, the vehicle began to slow and our trooper continued to gain on the vehicle to get into position for a high risk stop or a pit maneuver.”

A pit maneuver is when law enforcement drive their vehicle into a fleeing car, causing it to spin out, ending the pursuit.

“As he was closing the gap on the vehicle, the suspect in the vehicle fired three rounds at our trooper, and one of those rounds struck him in the shoulder,” Chavez said. “The trooper (who had a non-life threatening wound) was able to maintain his composure, continued with a pit maneuver, successfully pitted him to the right side into the brush, where the vehicle collided with a post along the fence.”

The suspect fled on foot into the desert and nearby rural homes on Airport Road in Willcox near milepost 338.

That’s when the Bracamontes encountered him. They were preparing for an early morning departure to Oklahoma for a memorial service when the suspect approached Joseph Bracamonte’s home.

“Joseph first let him in at about 3:30 a.m. to get a drink of water, go the bathroom and make a phone call,” said Andy Bracamonte III, 32, Joseph’s older brother. “Joseph had just heard a traffic accident nearby on the freeway and the man said he had wrecked his car.

“He was dirty and his arm was scratched up, so I offered him some water and some Tylenol,” Joseph said. “He took the water but not the Tylenol and made a call to his mom in Georgia.

“He didn’t seem human when I saw him. His eyes were blank and looked like he was dead to the world.”

The Bracamontes, including dad Andy Jr., 63, didn’t know the man had just shot an officer.

“He wanted a ride to the Greyhound bus depot at the Freeway Texaco,” Andy Bracamonte III said. “He got into our truck as were preparing to leave, as Joseph thought we could just drop him off on our way out. I realized that might be a bad idea because we didn’t know this guy and he didn’t seem to have any emotions, just coldness. So before dad and Joseph got in with him, I hid behind one of our other vehicles and called the cops.”

Within minutes, Joseph Bracamonte said, local, state and county law enforcement showed up, knowing they had found their fugitive.

“One local cop quickly realized we were the only ones from that house and pushed us off to the side in the back by the water shed,” Joseph Bracamonte said.

Chavez of the DPS detailed what transpired from there.

“At some point in time, he (the suspect) exited the vehicle and was armed with a semi-automatic firearm,” Chavez stated. “He refused any commands from law enforcement and began approaching the doorway to the residence. He maintained possession of the firearm, refused to drop the firearm. As he approached the doorway and attempted to make entry into the residence, still armed, that’s when law enforcement engaged in lethal means to the threat.”

It appeared some of the officers weren’t aware the home was unoccupied when the suspect opened the screen door to the house. Chavez called the structure occupied in his statement to the media.

“Although he was polite and never seemed a threat to any of us, I could see he didn’t have good intentions when he saw the officers,” Andy Bracamonte III said. “He never pointed his gun at them, but he also never stopped walking toward Joseph’s house (which was locked).”

Andy said he heard 11 shots (a neighbor reported hearing 10) but he didn’t see the victim when the officers fired.

“I saw him wailing about as they administered CPR, but an officer told me he was dead within 15 minutes after getting shot,” Andy Bracamonte III said.

County attorney Brian McIntyre said a semi-automatic pistol with a high capacity drum magazine was found close to the suspect after his apprehension.

“We knew he had a pistol in his lap when we were getting ready to give him a ride, which is why we hesitated,” Andy Bracamonte III said. “All I know is I wasn’t going, but if my dad and brother did take him and I hadn’t called the cops, he would have likely shot them and taken the truck.”

The suspect, the officer involved in the shooting and the injured officer have not been identified. Capas did say the suspect was a 21 years old.