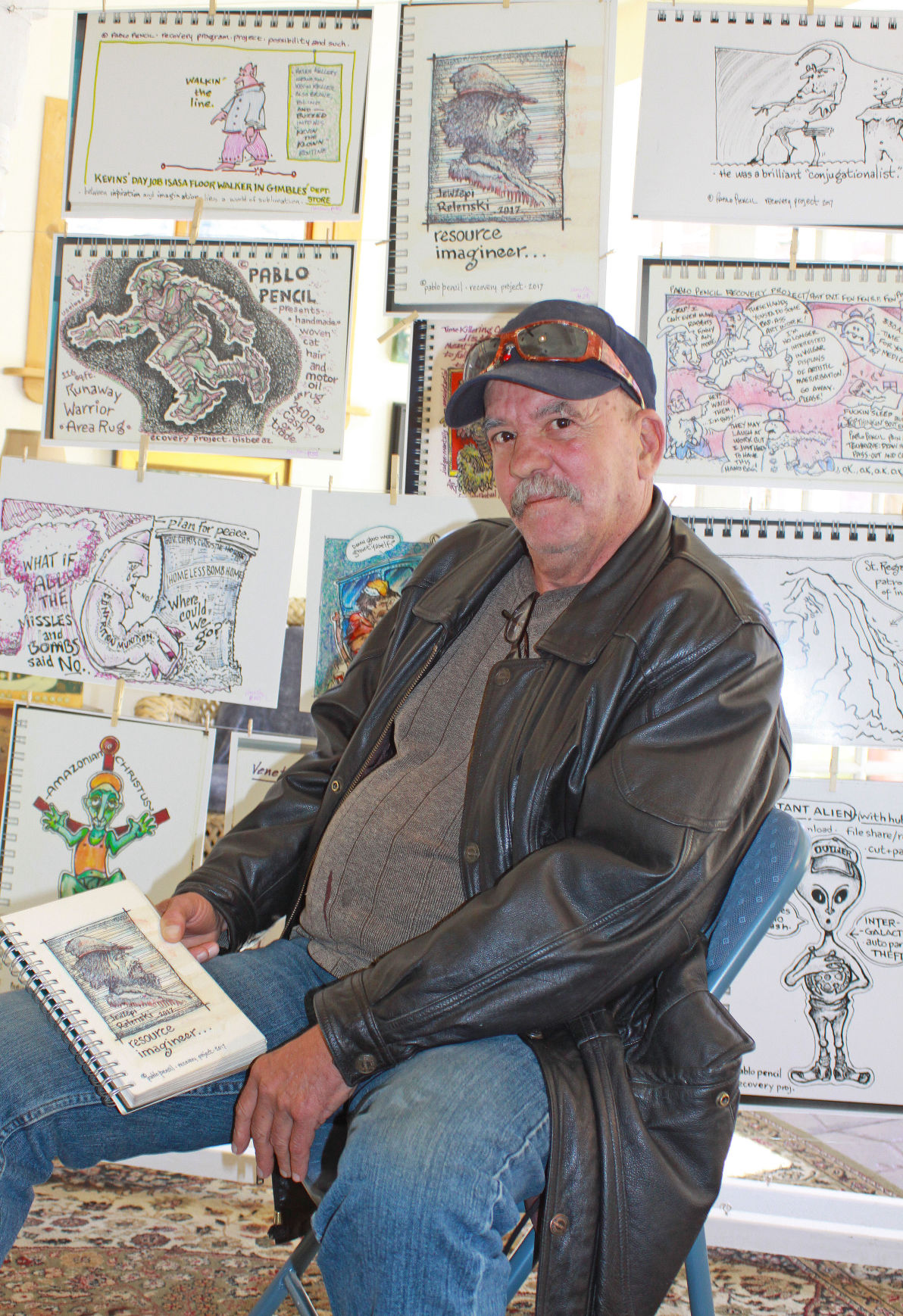 Francis Kiman was able to recuperate from his surgery through countless hours of drawing in his sketchpad. Those efforts are on display for the rest of the month of January at Sense of Place Gallery, located at 63 Brewery Gulch in Bisbee. 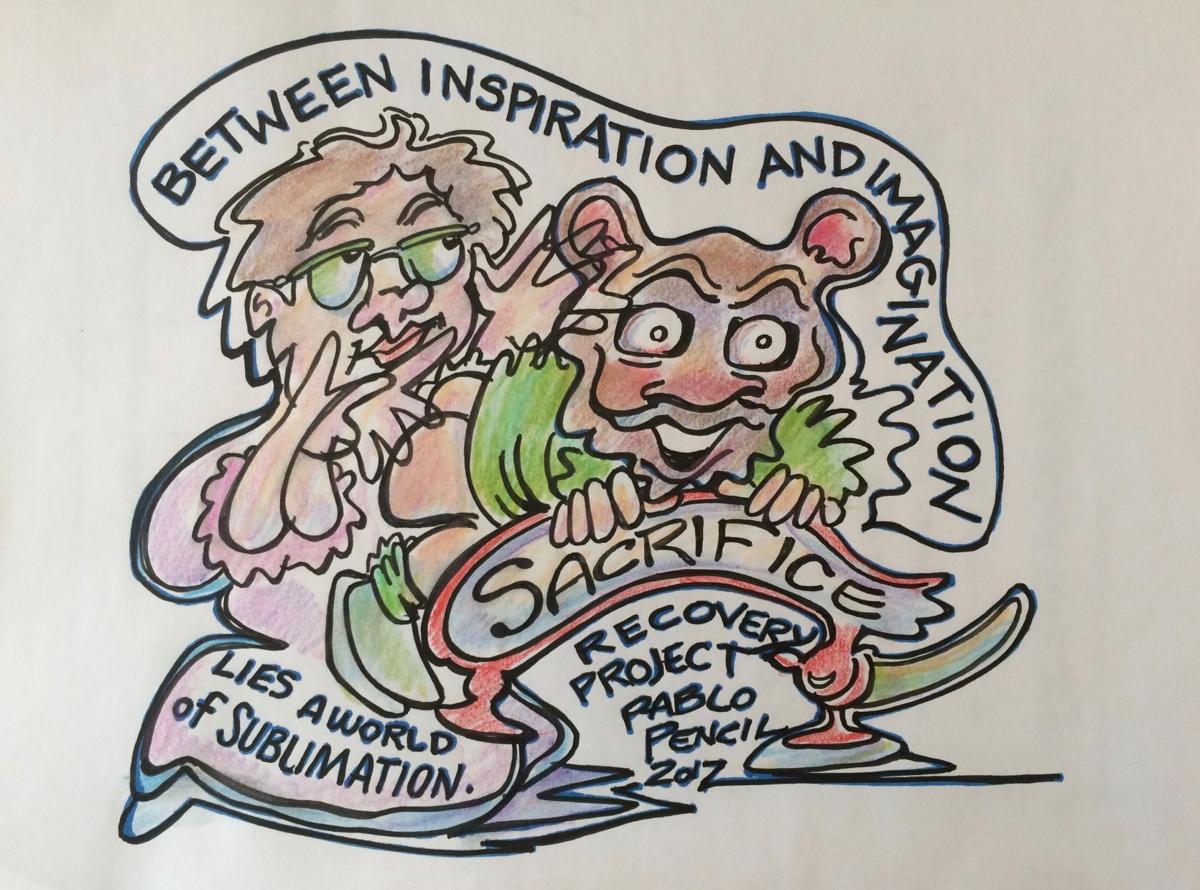 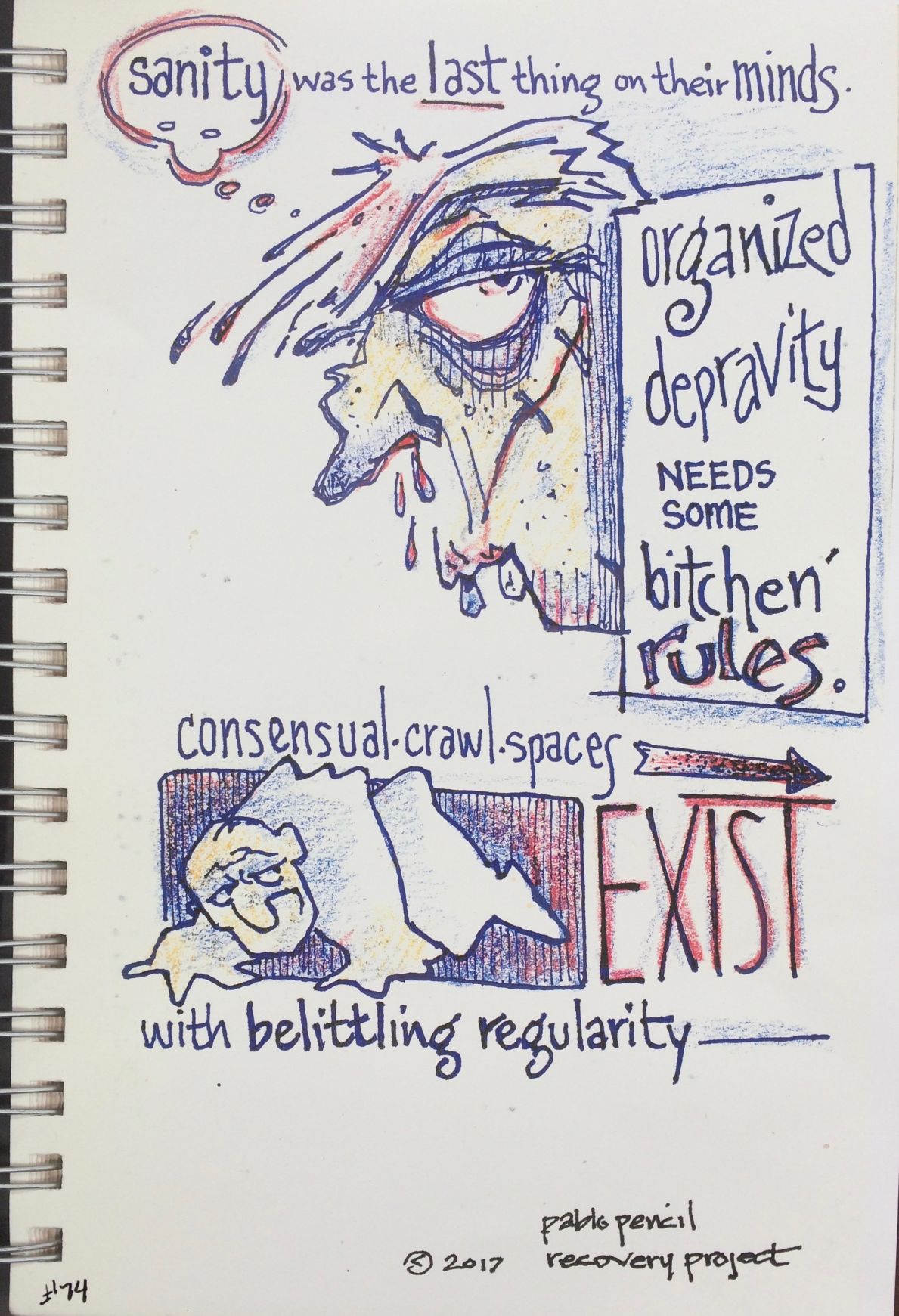 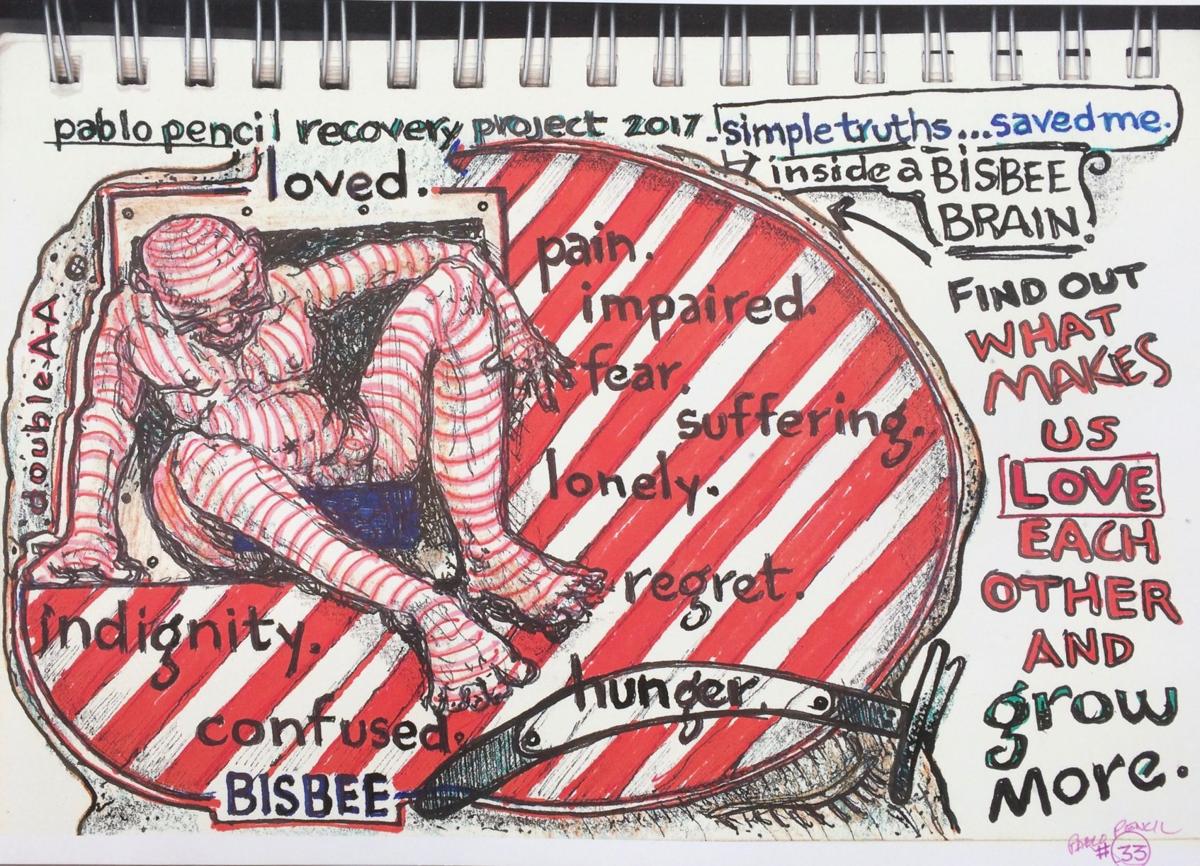 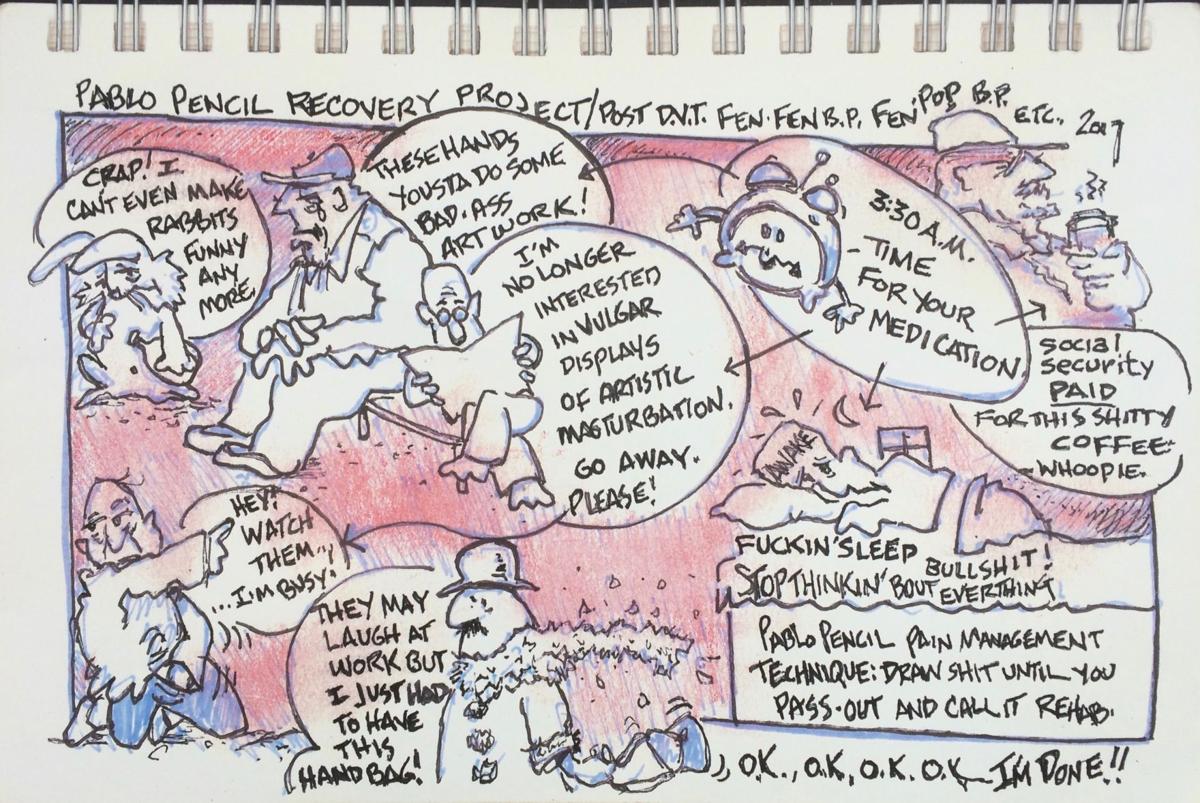 Francis Kiman was able to recuperate from his surgery through countless hours of drawing in his sketchpad. Those efforts are on display for the rest of the month of January at Sense of Place Gallery, located at 63 Brewery Gulch in Bisbee.

BISBEE — When Francis Kiman learned he’d have to spend a number of months at a nursing home, he never expected one of the best prescriptions helping him recover from surgery would be a pencil.

A native of Massachusetts, Kiman, also known as “Pablo Pencil,” graduated with an art degree from the Southeastern Massachusetts Technological Institute — that’s now known as the University of Massachusetts Dartmouth. While at school, Pablo loaded trucks for the Boston Ballet, which slowly evolved into a career as a set designer.

“I designed 70 shows without any formal training,” he said.

Because he learned quickly and was meticulous when it came to details, Pablo gained a name for himself and started handling larger clients and events for venues like the Wilbur Theatre. From there, he ended up running his own company. After years of a very high-pressure life, Pablo decided it was time for a change.

“I fell in love with a playwright from New York and we split the difference (between Massachusetts and New York) and moved to New Hampshire,” he recalled with a chuckle.

There, he started a new life with an art gallery and design studio. He also served as the artist in residence for the state and taught in a number of schools. That was, until he fell off a ladder in his studio and broke all the bones in his foot. According to Pablo, the injury changed a lot for him and with winter coming, he needed a change. And with some advice from a friend, that change was Bisbee.

When he first entered the historic mining city, Pablo dipped into his past experiences and helped create new atmospheres in various venues — including Hot Licks Saloon, a former barbecue and blues venue.

“I’d also go into bars and draw people,” he said. “I have a rolodex of expressions in my head.”

Things seemed to be going well until a sickness swept over him and he found himself unable to use his legs.

“It was out of the blue. I crawled up the stairs to the bar (nearby)...they thought I was having a stroke,” he said.

As it turned out, his right femoral artery was blocked, cutting off the blood supply to his right leg. And because there aren’t traditional rehabilitative facilities nearby, Pablo said he ended up in a nursing home.

“It was horrible. I was in so much pain and I was helpless,” he said. “It was a wakeup call.”

That helplessness, however, started to disappear when he started drawing and writing.

“Sometimes I would start writing words on pages and sometimes it didn’t make sense, but I would could keep going until creating,” he said. “I began to draw in earnest, soon after my first surgery and nursing home recovery. Seven months and three more surgeries later, I had filled four, 50-page sketchbooks — on both sides — with my drawings.”

The drawing, Pablo said, became his way to survive and offer up sanity when he felt like he didn’t have any.

“When I draw, I forget and reality goes away,” he said. “And when that happens, I’m not cognisant of the pain. I’m coping. It was an empowering experience.”

Having also dabbled into political cartoons with area newspapers, Pablo said his sketches often touch on the same wavelength of politics, social events and humor. He creates each image with ink and watercolor pens. And a representation of that work is available for the public to experience firsthand at the Sense of Place Gallery until the end of the month.

“Perhaps it’s not my ‘best’ work, nonetheless, it represents a life-changing transition and in some, but not all of these drawings, my survivalist nature struggled to find true expression,” said Pablo. “It is my pleasure to share this window of experience with you.”