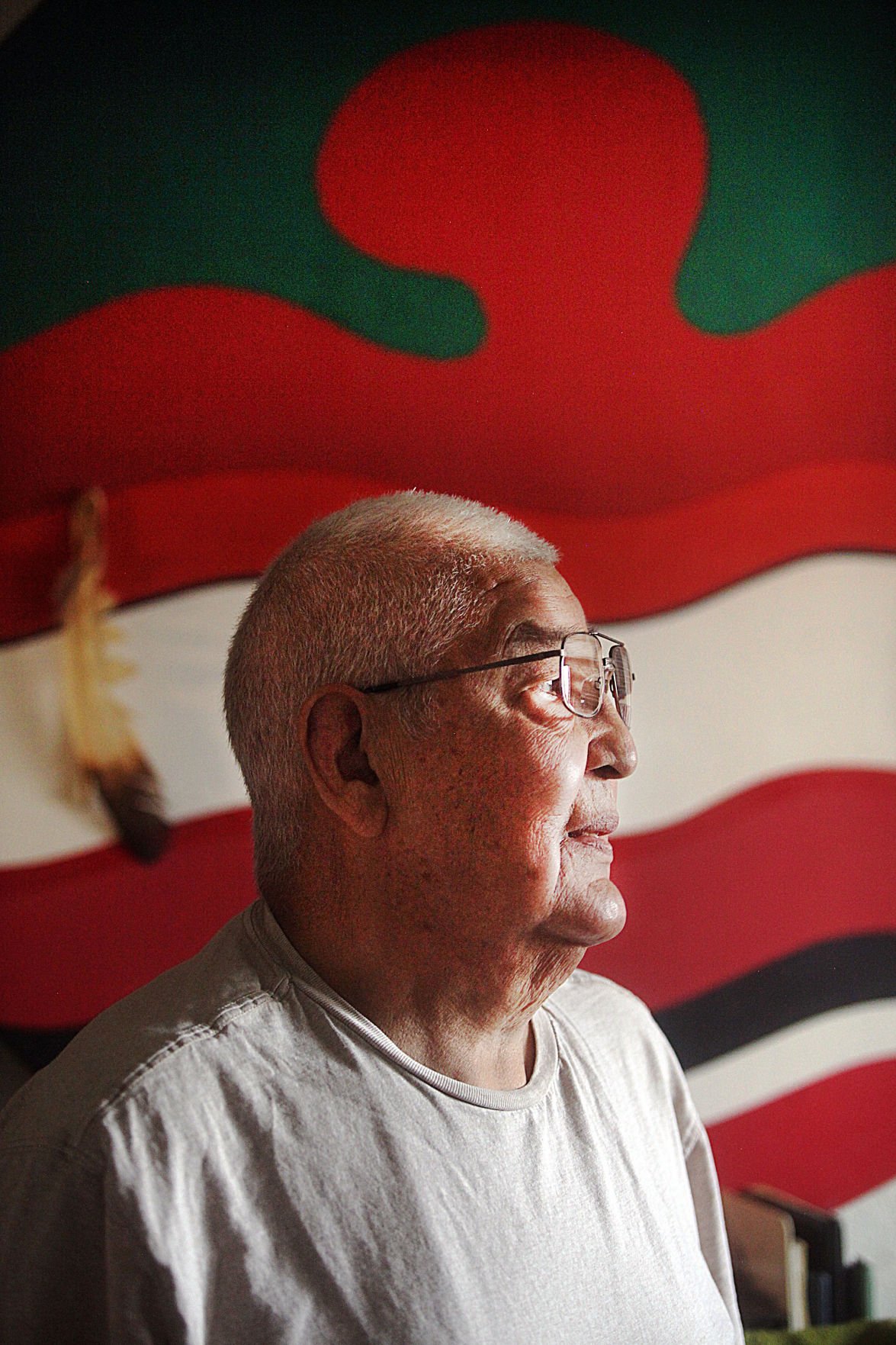 Douglas artist Ben Lucero stands near one of the paintings he submitted for his masters degree. 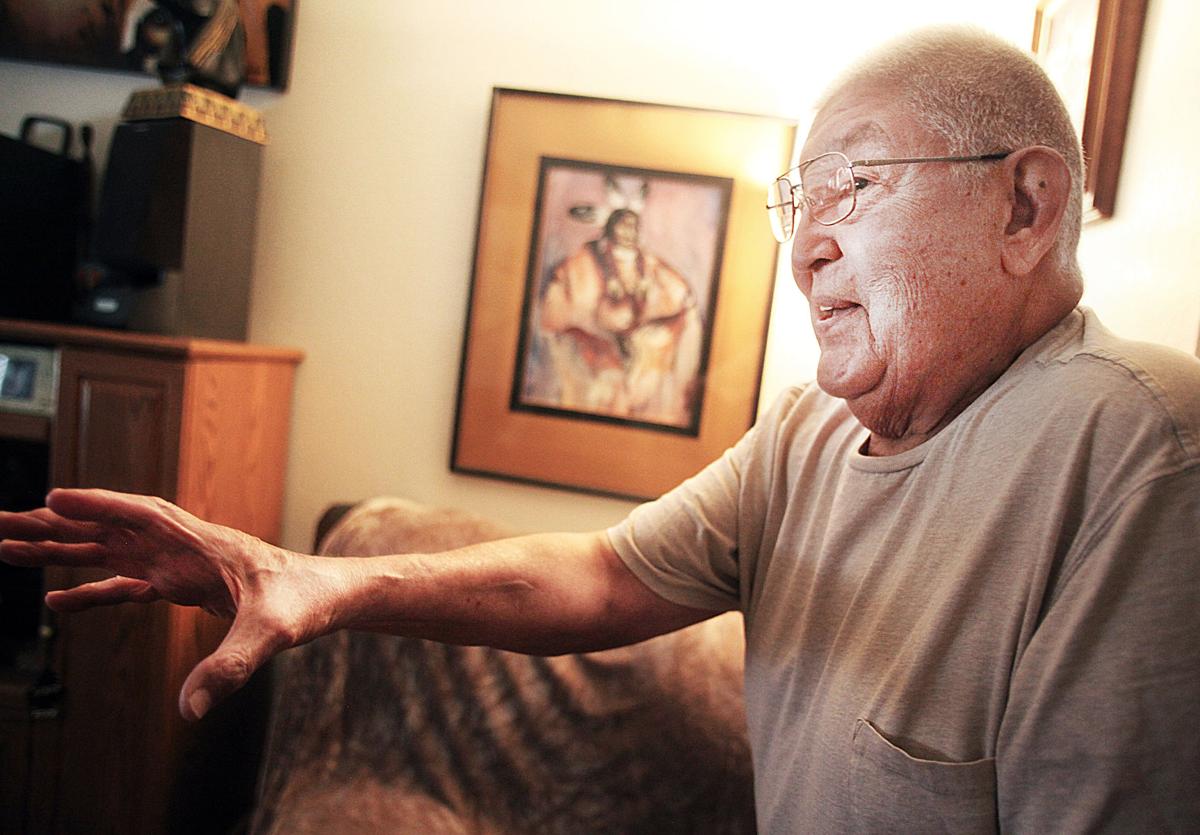 Ben Lucero talks about his prolific career as an artist. 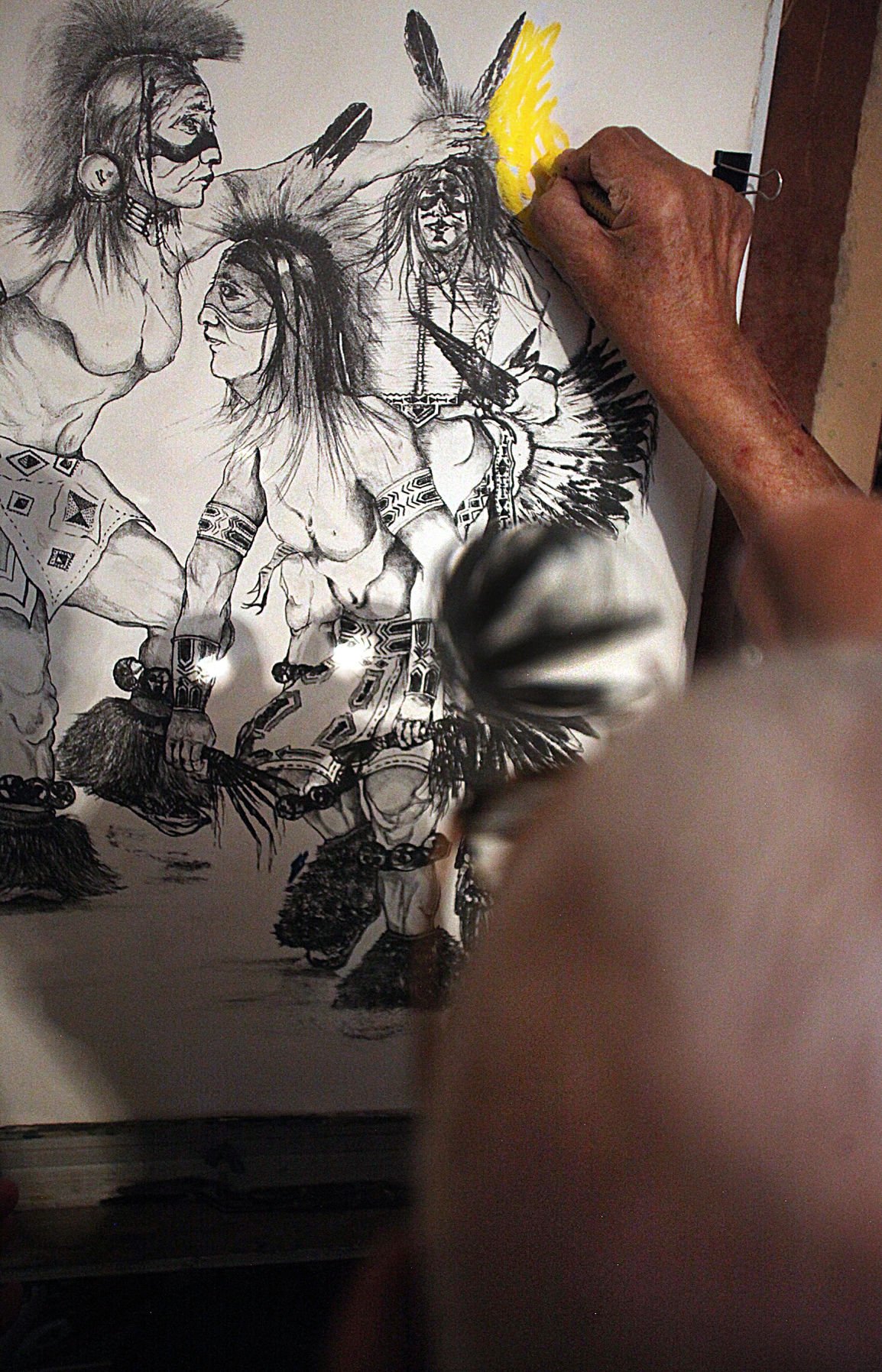 Ben Lucero begins to work on an older lithograph he decided to add color to.

Douglas artist Ben Lucero stands near one of the paintings he submitted for his masters degree.

Ben Lucero talks about his prolific career as an artist.

Ben Lucero begins to work on an older lithograph he decided to add color to.

Every bit of paper in Douglas-based artist Ben Lucero’s home studio, from squares of cardboard to large pages, is filled with art: a quick watercolor of the California coast, a stone lithograph of a Native American dancer, his plumed headdress a blur of motion.

Lucero, 82, doesn’t throw away any of his work, even if a painting was a “warm-up” or didn’t turn out the way he had planned.

Artists learn from everything they create, he said: the turn–of–the–19th century Native American artists that he studied, some of whom painted or drew on wrapping paper or other scraps, created art that was just as worth saving as work laid down on pricey canvas.

“What did I learn from those guys? It comes from here — the mind and the spirit,” he said, touching his head and chest.

Lucero, who also goes by his Raramuri Indian name, Chírí Soporí, is an American Indian painter — not because he limits himself to Native American themes, but because he is “an Indian who paints,” he explained wryly.

“Art is art, and it’s a philosophy of life to each individual, regardless of racial or ethnic groups,” he said.

Lucero’s prolific and varied body of work, which he steadily continues to produce even as his mobility has declined in his older years, spans decades and has been exhibited throughout North America and Europe. It doesn’t adhere to one style or trope — much like the Douglas native’s dynamic life.

Lucero was born in Douglas in 1937 to a Raramuri Indian father and a Mayo Indian mother, peoples native to areas of Northern Mexico, back when numerous families were drawn to the border town because of work available at the now-closed smelter.

Lucero was more focused in academics and sports as a child, his interest in art not taking hold until he began studying at Bacone Indian Univeresity in Oklahoma under renown Cheyenne artist Richard West.

“He made an impact on me, as he did other students,” said Lucero. “He wanted all of us, in taking art from him, to study our cultural birth and our cultural background, who our parents and grandparents were.”

While Lucero had had a home education about his origins from his parents and grandmother, he, like most of the students at the college, didn’t grow up in a reservation setting and had somewhat “limited” knowledge of his heritage, he explained.

Applying what he learned about American Indian history and culture to art helped him continue to develop his identity: “I started doing this research, and looking into who we are,” he said.

Those studies led to a Master’s degree in art from San Diego State University, and to a career teaching and lecturing about Native American art, law, history and other topics at colleges and universities in both the U.S. and Europe.

One of Lucero’s proudest accomplishments as a teacher was starting satellite community college centers throughout Indian reservations in California in the 1970s, a project that stemmed from his firm belief that everyone had a right to a strong education.

“We all make a difference in one way or another,” said Lucero. “...My mother and father used to emphasize, “God gave you three things: intelligence, good health, and the ability to stand on your own two feet,” and it’s up to me to use those attributes.”

Those attributes, and Lucero’s hunger for knowledge, drove him to many careers and projects throughout the years. He has headed numerous boards and commissions for academic and political organizations, including stints as president of the California Indian Education Association and director of the Republican Party of Douglas, all while continuing to evolve as an artist and teacher.

Although Lucero doesn’t identify himself as “traditional” (“My question to you is, what is a traditional artist?” he countered when asked to define his style,) experimenting with everything from silver wirework etchings, to abstract paintings, to digital storytelling, it his is vibrant, intricate portraits of Native Americans that have been most widely reproduced — and that first captured the attention of his wife of over 30 years, Edith.

“We met in Belgium — he was producing his art work overseas, and he had an importing exporting business also,” she said. “The first time he introduced me to his artwork, there was a lot of artwork that I didn’t know, like stone lithographs and silk screens, so he opened this brand new world for me.”

Since settling down in Douglas in 1990, the pair has also become involved in Cochise County art scene, selling work to many collectors in the area and regularly attending events such as Art in the Park in Sierra Vista, she said.

“I love his art,” said Edith, gazing at one of the many paintings that brightened the walls of their home. “It’s very traditional, and that’s what I like, the traditionalism of his work — and the colors, the amazing colors.”

Lucero slows no sign of slowing down, even in his 80s. He spends his days among stacks of photographs and discs, completed and half-completed paintings, cards and gifts from loved ones dating back decades, continuing to create art and develop “the portfolio of my life,” he said.

“At 82, I’m still hungry for more knowledge,” he said. “It never stops, and I’m glad that the Great Spirit, God, has given me that blessing.”