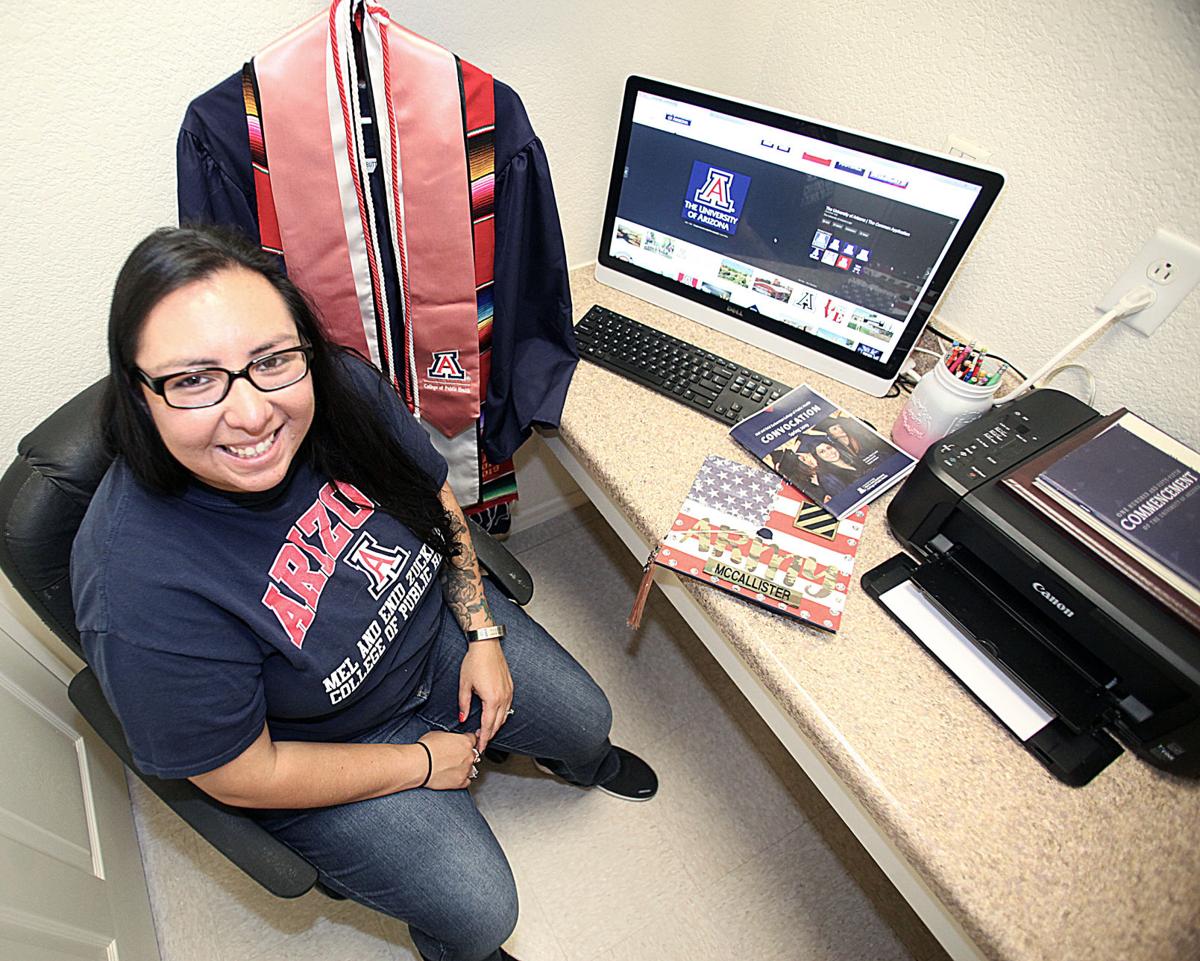 Linda McCallister sits next to her computer at home last week. McCallister is the first military-affiliated student to graduate from the UA’s fully online program. 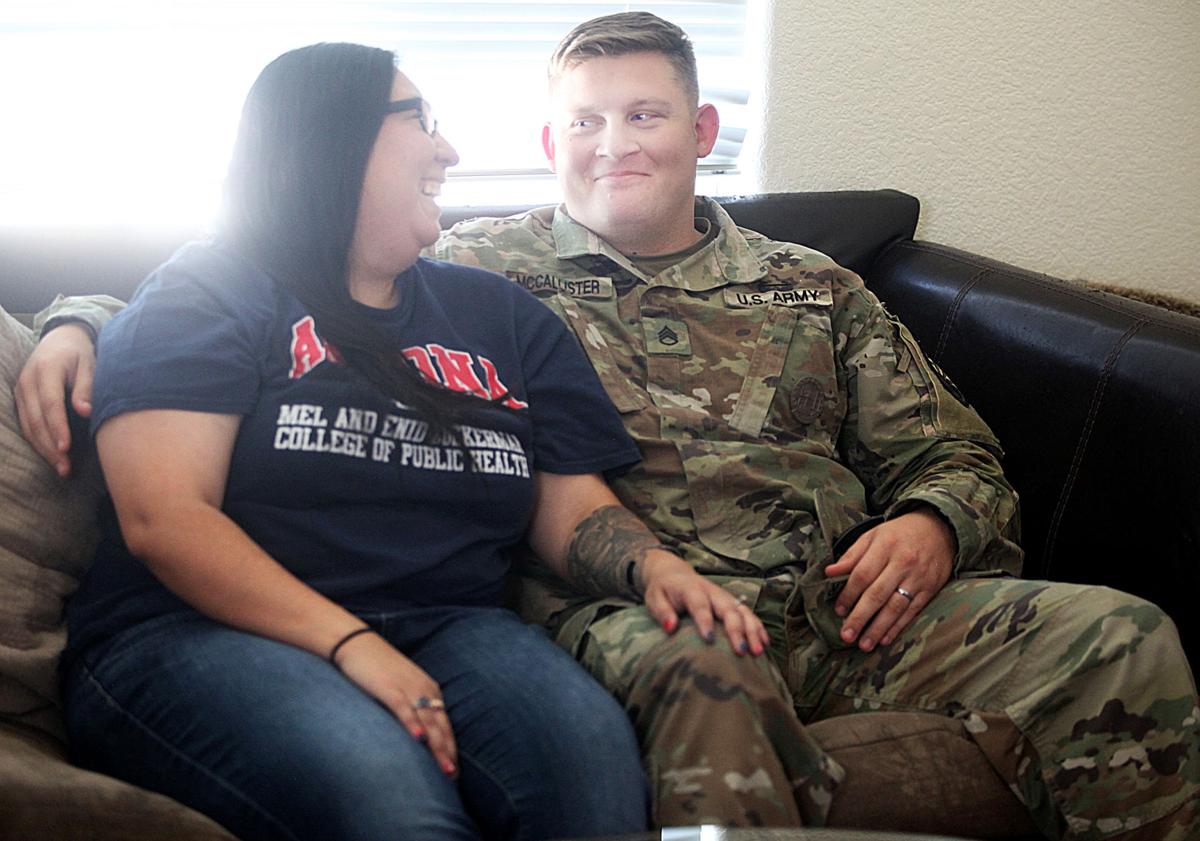 Linda McCallister sits next to her computer at home last week. McCallister is the first military-affiliated student to graduate from the UA’s fully online program.

Sierra Vista resident Linda McCallister has been working hard over the last few years to earn her degree in Public Health from the University of Arizona. As a non-traditional student, she had plenty on her mind alongside homework and studying for tests.

She would have never guessed that she would end up becoming a trailblazer in one of the UA’s online programs.

The recent graduate not only celebrated her degree at last week’s commencement ceremony, she has been recognized as the first military-affiliated student to graduate from the UA Mel and Enid Zuckerman College of Public Health’s fully online undergraduate program.

“It’s an honor and I was really shocked,” she said. “I honestly thought more military-affiliated students would be taking it online.”

McCallister was in the Army as an interrogator for five years, receiving an honorable discharge in 2012.

Once out of the military, she moved to Sierra Vista with her husband who is active duty and stationed at Fort Huachuca.

She originally enrolled as a transfer student to the UA’s main campus for the nursing program, though she would end up pursuing bachelor’s degree in Public Health instead.

“I became really interested in public health and the whole essence of the program is prevention and health promotion,” she said. “The health of the United States has been slowly deteriorating and our government has been more reactive instead of proactive.”

“I feel that public health plays a major role in being proactive in helping the healthcare system.”

When McCallister first started she was making the commute to Tucson everyday and the driving time coupled with schoolwork started to impact her family time. She made the switch to the online program in 2017.

“I was on campus but driving from Fort Huachuca to Tucson was tiresome — get home at 7 p.m., just enough time to eat dinner and go to bed; it was tough that first year,” she said. “My advisors said, ‘are you sure you don’t want to do this online,’ and I decided I need to do this, I had zero time with my family.”

Making it as an online, non-traditional student had its challenges and she credits her success to her ability to plan and block out time.

“You definitely have to be proactive and know that if you are going to be a procrastinator online is not for you,” she said. “You have to be a self-starter, self motivated, because it’s easy to fall behind.”

McCallister’s academic advisor Grace Patterson wrote about McCallister’s ability to balance life and school, as well as her achievements in the program.

“As a non-traditional student, Linda balances her family life with being a full-time student,” she wrote in an email. “Linda currently holds a 3.129 GPA and she serves as a shining example for other military spouses, who often have to choose their military spouse’s career over their own educational or career aspirations.”

During her time as a student, McCallister completed an internship at the Ft. Huachuca Preventative Medical center, averaging 18 to 20 hours per week doing screenings for tuberculosis, sexually transmitted diseases, pregnancy and postpartum education and vaccine promotion.

Now that she has obtained her bachelor’s degree she hopes to get a job at Fort Huachuca doing public health.

“I’ve completed my internship and I’m hoping the word spreads on what I did there,” she said. “If not, I have my eyes set on the county as they are hiring as well.”

McCallister minored in Spanish and believes it’s an important language to bring into your future career.

“I felt it was beneficial with Spanish speakers being on rise in the U.S. and there’s not a lot of translators or interpreters in healthcare,” she said. “My family are Spanish speakers and both my parents are from Mexico. I feel a need to help the Hispanic community.”

When McCallister has free time, she likes to spend it with her husband and nine-year-old son. One of the things they enjoy is going to car shows.