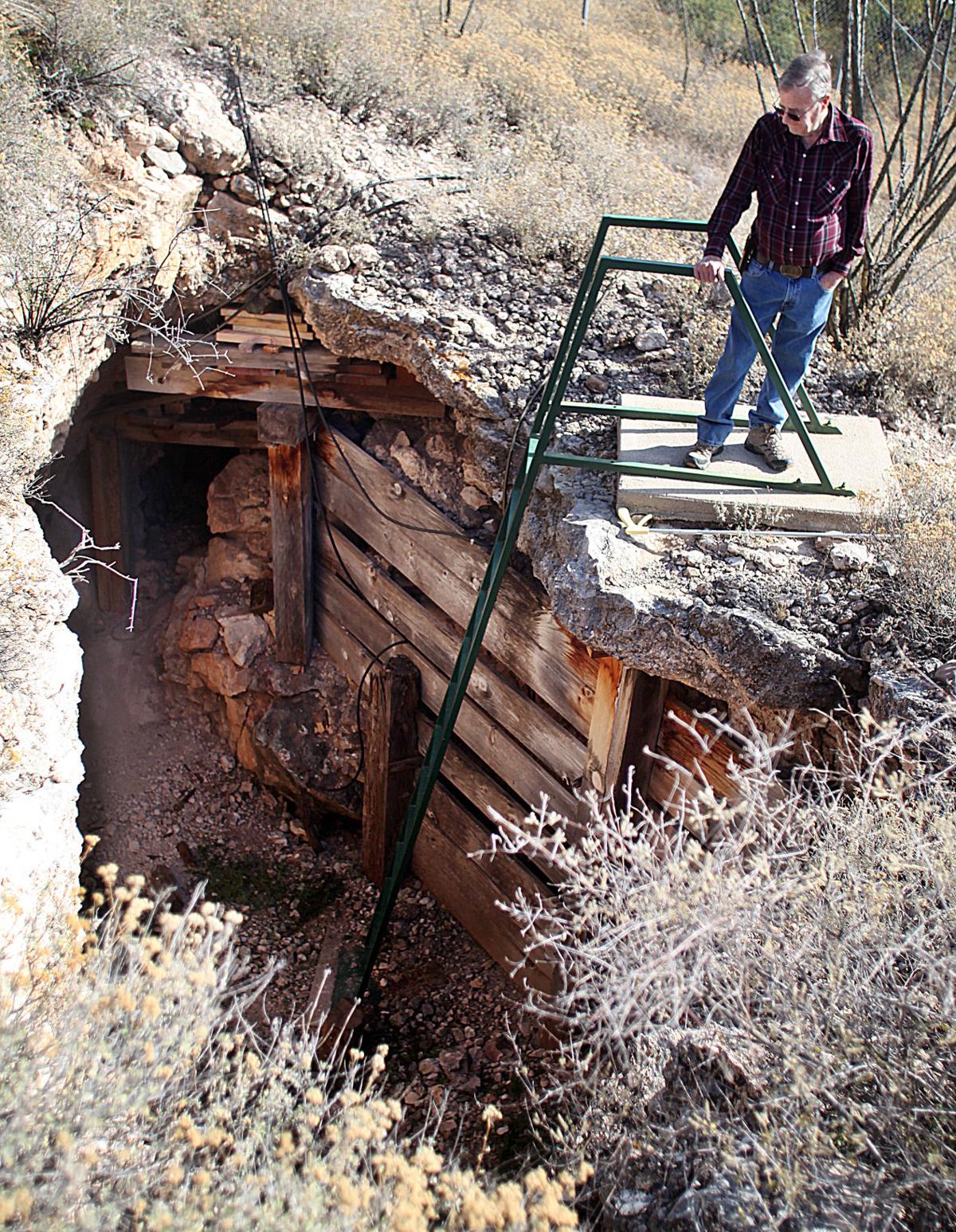 Benson resident Dick Ferdon peers into the sink hole that the discoverers of Kartchner Caverns crawled into 45 years ago. Some 14 years later Ferdon was tasked with guarding the site for almost a year so no trespassers would discover it. 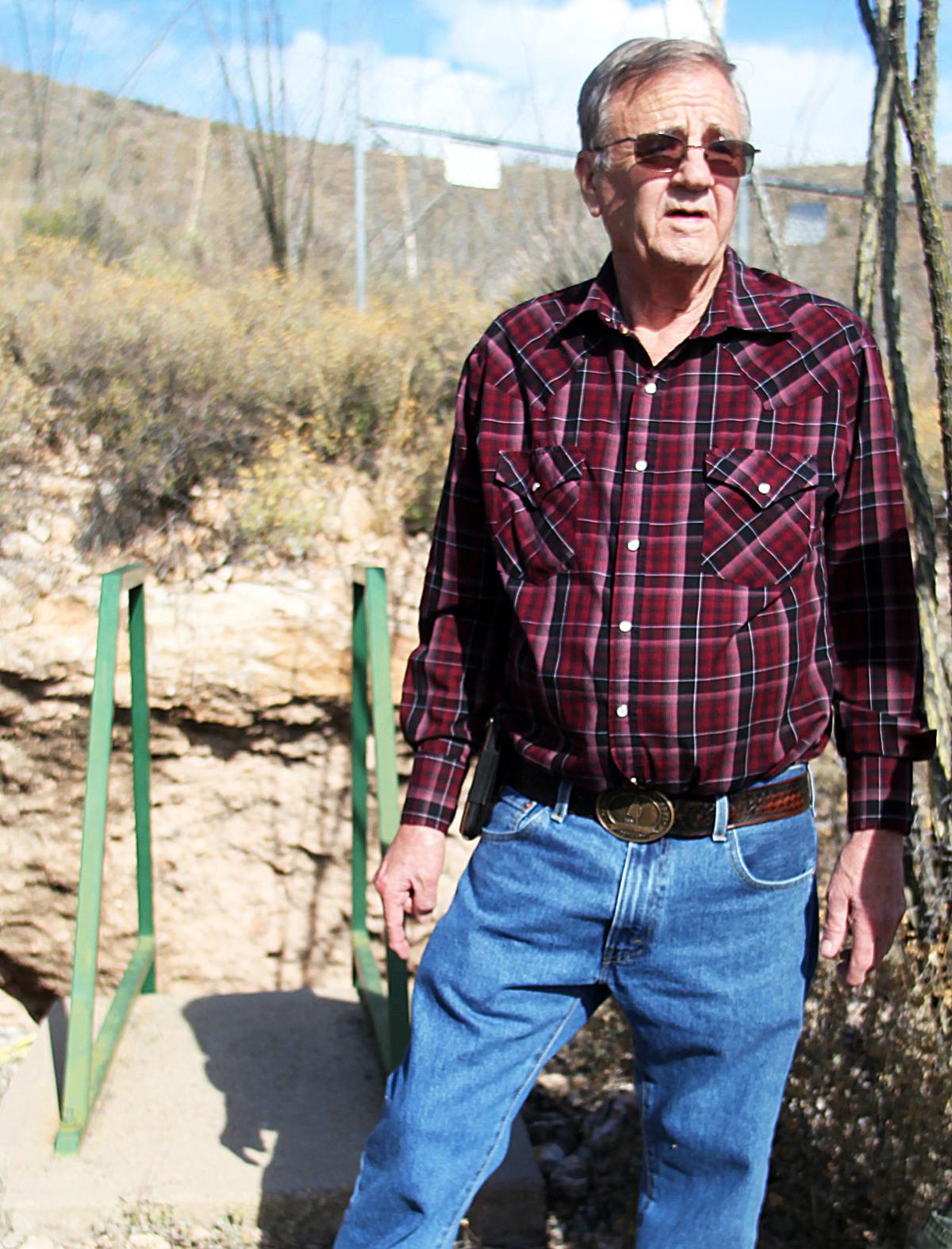 Dick Ferdon, now 73, was in his 40s when asked to guard a sinkhole that would lead to the development of Kartchner Caverns State Park.

Benson resident Dick Ferdon peers into the sink hole that the discoverers of Kartchner Caverns crawled into 45 years ago. Some 14 years later Ferdon was tasked with guarding the site for almost a year so no trespassers would discover it.

Dick Ferdon, now 73, was in his 40s when asked to guard a sinkhole that would lead to the development of Kartchner Caverns State Park.

It was in 1988 that Dick Ferdon was asked to leave his position at Picacho Peak State Park to guard a ranching property in southeastern Arizona.

That 11-month assignment turned out to be the most memorable experience of Ferdon’s 31 years as an Arizona park ranger.

Ferdon, now 73, was in his 40s when asked to guard a sinkhole that would lead to the development of Kartchner Caverns State Park, a living, breathing cave system discovered by Randy Tufts and Gary Tenen 14 years earlier. As experienced cavers, Tufts and Tenen knew unprotected caves are often vandalized by unregulated use, so they kept their find a carefully guarded secret until they were able to secure support from state officials through the cave’s development.

“For several years, very few people knew about the discovery,” Ferdon said as he talked about his role in protecting the sinkhole from intruders and assisting with the cave’s mapping. “In 1978, four years after they discovered the cave system, Randy and Gary told the property owners, James and Lois Kartchner what they had discovered, and even the Kartchner family was sworn to secrecy.”

Ferdon said from the very beginning, Tufts and Tenen worked hard at finding people who would understand the importance of preserving the cave’s integrity during the development process.

By the time Ferdon arrived in Benson to stand watch over the sinkhole, Tufts and Tenen had revealed their find to the Kartchner family and a handful of state parks officials and legislators.

“The goal was for the state to purchase the property and develop the cave, but Randy and Gary knew they would need legislative support for that to happen,” Ferdon said. “Up until 1988, right before they were getting ready to announce the discovery, everything was done in secret.”

Within a couple of days of his arrival, Ferdon met Tufts and Tenen who shared the discovery with him, and why it was shrouded in secrecy.

“I still had no idea of the magnitude of the discovery, until I went into the cave with them for the first time. I remember being awestruck by the incredible formations and listening to the drip, drip of the moisture. Once I was in the heart of the cave, the magnitude of what I was seeing hit me.”

For the 11 months that Ferdon watched over the cave’s entrance, he lived in a travel trailer southeast of the sinkhole. He remembers sitting up on a hill, watching over the area with binoculars. After the discovery was announced to the public in 1988, Ferdon said “all heck broke loose” as curious adventure-seekers came searching for the opening.

Heidi Lauchstedt, who is one of Kartchner’s cave unit rangers, said Ferdon served as an armed law enforcement officer along with his park ranger position.

“He has great stories about sleeping in the travel trailer during those months and he talks about what it was like to go into the caverns with Randy Tufts and Gary Tenen before the cave was developed,” she said.

When entering the sinkhole Ferdon said he dropped down about six feet and remembers wondering if he would be able to get out. From there, he went into a passageway through an opening and belly crawled to a T-intersection.

“Left was a small room, and right was the Big Room, which is where the bats roost six months of the year,” he said.

“Even though the Big Room was discovered before the Throne Room, or Rotunda Room, they were developed first.”

After crawling through mud-filled passages, in some places where it was waist high, Fedon said there were times when all you could see after coming out of the cave were a person’s eyes.

“We wore jeans, boots and gloves and helmets with carbide lights, eye protection and carried daypacks with items we needed for that day,” he said. “At that time, there were no lights in the cave at all, so we carried three sources of battery-operated light.”

During the cave’s development, they were assigned tags with numbers that they took with them when going down into the cave. Each number corresponded to a particular employee.

“At day’s end, when the shift was over, we placed the tag back on a board, so everyone could be accounted for,” Ferdon said.

“Everyone had their personal limit as to how long they could tolerate staying in the cave because of its pitch darkness,” said Ferdon, whose limit was about eight hours. “Because I was with Randy and Gary, I usually had to stay in as long as they did. They loved caving and would stay in there for hours.”

After 11-months of standing guard, Ferdon returned to Picacho Peak as a park manager. During the cave’s development, he occasionally visited the site to see how it was progressing.

In 1999, he became Kartchner Caverns State Park manager until his retirement in 2009.

Ferdon attended the park’s grand opening celebration 20 years ago, and was invited to the 20-year anniversary celebration on Nov. 16, where he participated in panel discussions.

“It was an amazing experience to be in on the cave’s development,” he said. “Meeting Gary and Randy and being part of this incredible discovery is something I’ll never forget. Even today, when I visit the park and go into the cave, it brings back memories.”