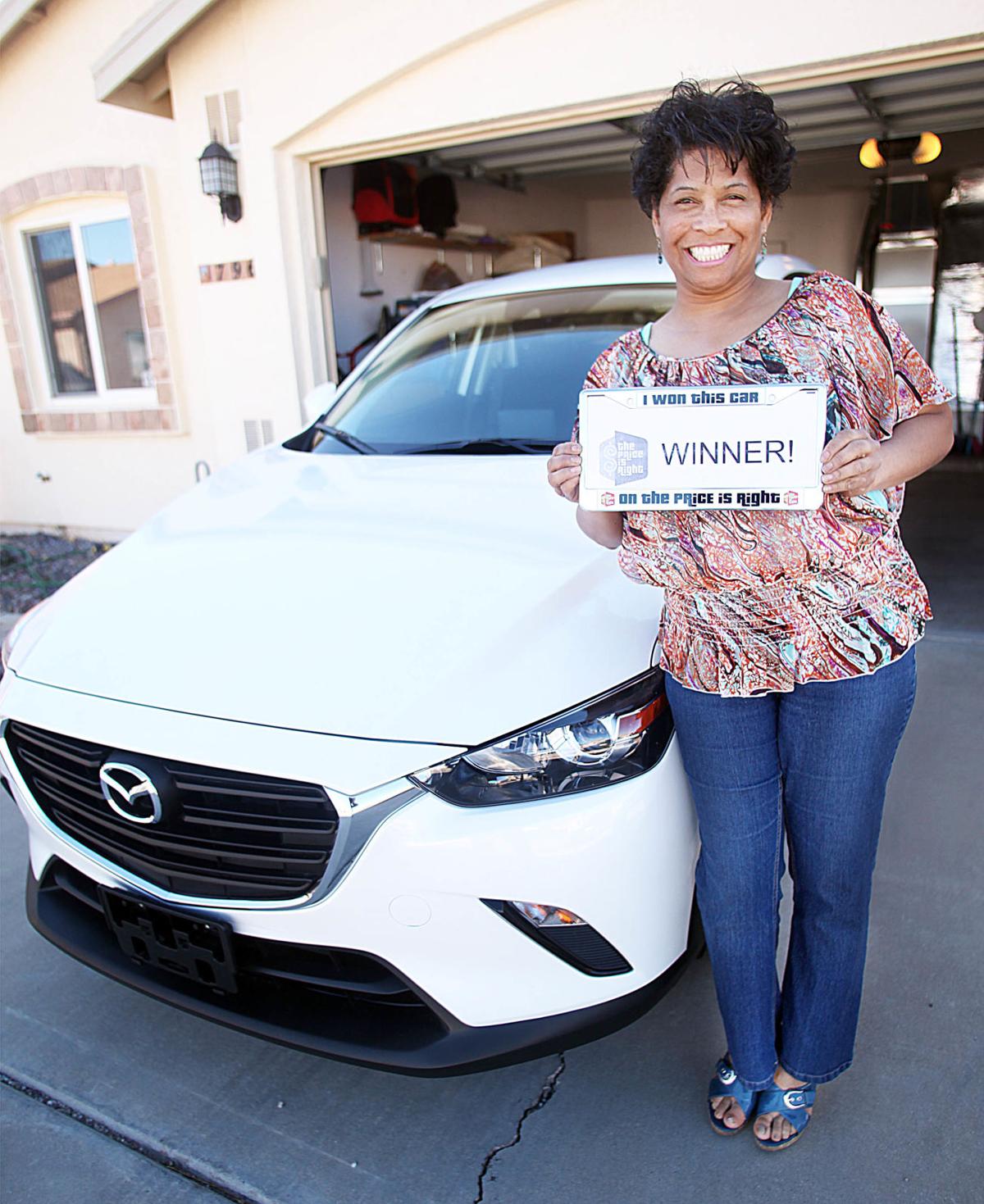 Victoria Ashford stands next to the new 2019 Mazda CX3 car she won last month from the television game show The Price is Right. Ashford just received the new vehicle on Friday. 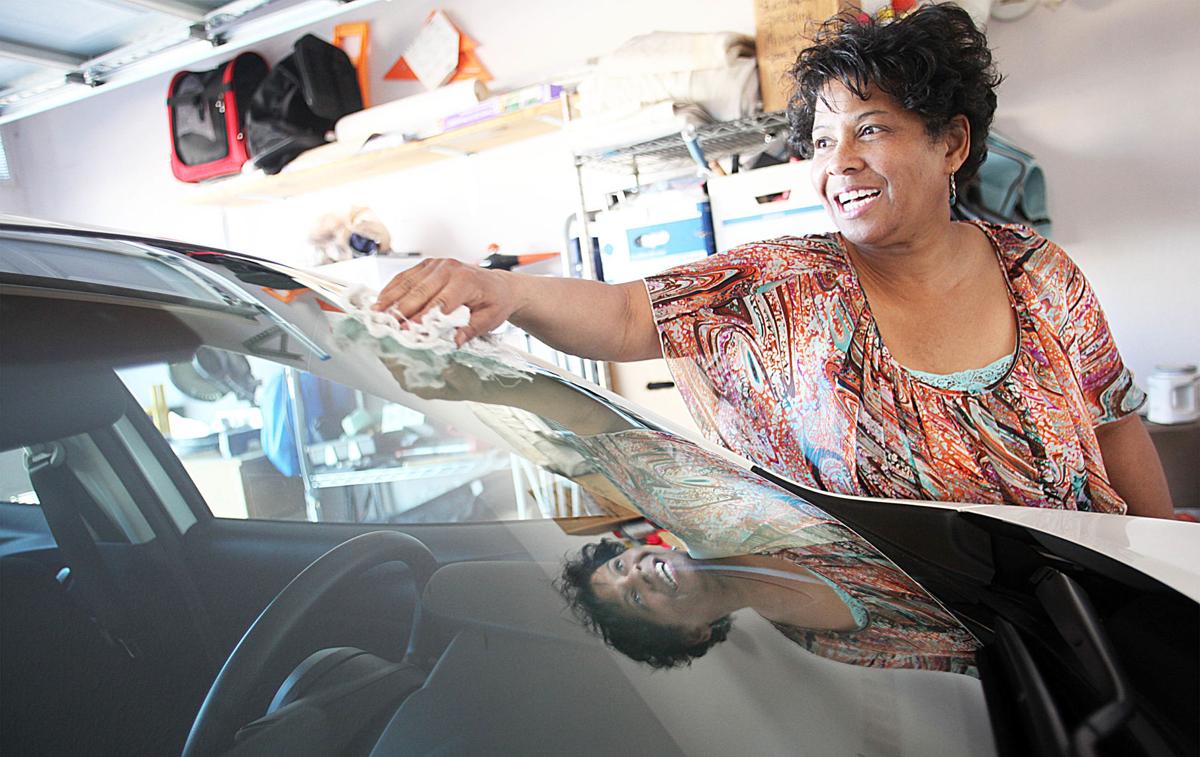 Sierra Vistan Victoria Ashford wipes down her new car Friday. Ashford won the car during her appearance on the TV game show “The Price is Right.” Her episode aired Feb. 28.

Victoria Ashford stands next to the new 2019 Mazda CX3 car she won last month from the television game show The Price is Right. Ashford just received the new vehicle on Friday.

Sierra Vistan Victoria Ashford wipes down her new car Friday. Ashford won the car during her appearance on the TV game show “The Price is Right.” Her episode aired Feb. 28.

She said it was a moment of chaos. When her name was called she couldn’t even hear it. She just saw her name on the cue card being held up on stage.

After attending eight tapings in total of the game show “The Price is Right,” Sierra Vista native Victoria Ashford said when they finally called her name, she “greyed out.”

“It’s surreal, I was in another zone,” Ashford said. “Before they start taping, George (announcer George Gray) comes out and says, ‘It’s going to be crazy, when you hear your name, you’re going to black out.’

“He’s right, but you don’t black out. I call it ‘greying out,’ because I’m hearing English, I’m participating and, when I won, that was a grey-out moment for sure.”

Ashford had always dreamed of being on a game show. She enjoyed watching them as a child and craved the feeling of excitement that comes with a big win.

“That has always been on my — I don’t have a bucket list, I have a ‘go do it!’ list,” she said. “Winning money on air, that’s the allure of game shows. Getting picked, getting on stage, it’s just unreal.”

Though it has always been a dream for her, Ashford didn’t realize how easy it was to get into a studio audience until about 2016, after she returned to Sierra Vista following years of service in the Air Force.

“I didn’t know how to get involved, so in 2016 I got dedicated to doing that; I knew I wanted to be on a game show,” she said. “It’s really simple. If you live here, you just get your free tickets online when you want to go and it’s a quick flight to (Los Angeles) or a nice drive; its so doable.”

It took Ashford several attempts, going to multiple tapings and not getting chosen until her name was called on the Jan. 8 taping of the show.

She got to play Gridlock, a game where the contestant navigates small cars from one lane into another by correctly giving the price of the named vehicle to win.

“Gridlock is one of the high-win games for cars,” she said. “I like Gridlock because a lot of people win. The price of the car is there, you just have to figure out which ones to get.”

“My current car has seen better days. (It’s) still going strong, but I have been looking for a new car,” she said. “When I got off stage, the producer came and shook my hand vigorously, saying, ‘Victoria, that was fantastic.’ “

“We were both grinning at each other and he’s happy to make great TV and I’m happy I’ve won a new car.”

Ashford said she knows of people who create whole spreadsheets in preparation for going on a game show. For her, the trick was more about discovering the type of people who get selected as contestants.

After attending multiple tapings, she figured out it was all about having the right kind of enthusiastic energy.

“I remember people who got picked were the ones having a little party in line, talking to everybody, that’s the ticket,” she said. “Once you set foot in the lot, be your most happy, excited self because they have been watching you ever since you got there.”

The entire experience was sheer joy for Ashford, despite being in the middle of recovering from a broken ankle. One of the hardest parts was keeping her mouth shut until the episode airs; part of the show’s disclosure agreement.

“I was about to burst and it felt like forever, even though it was only a month,” she said. “Some of the people emotionally invested in me live in the (Central time zone) or (on the) East Coast, so they actually saw the (Feb. 28 episode on which Ashford appeared) before I did and my phone was blowing up.

“One of my friends messed with me saying, ‘I can’t believe you kissed Drew Carey on the lips!’ I believed him, since I had the ‘grey out.’ “

Though she will not be able to return to Price as Right as a contestant until 10 years have passed — a rule of the game — she has her eyes set on other game shows like “Who Wants to be a Millionaire,” which she can try to get on as a contestant in a year, since even different game shows like a period of time to pass before someone who has appeared on one goes on another show.

For those who share a similar dream, Ashford said they should go for it.

“’Price is Right’ has the best odds of any show because they are choosing nine people from an audience of, say, 300 instead of competing with tens of thousands like you would in the $100,000 Pyramid,” she said. “Nothing is stopping you, and if it’s your one day of taping, you have a shot to be picked. If you are in that room with energy, a good interview and you be yourself, you could be picked.”

Ashford plans to take a trip in her new car to Texas with her mom, whom she thanked for going with her to multiple tapings.