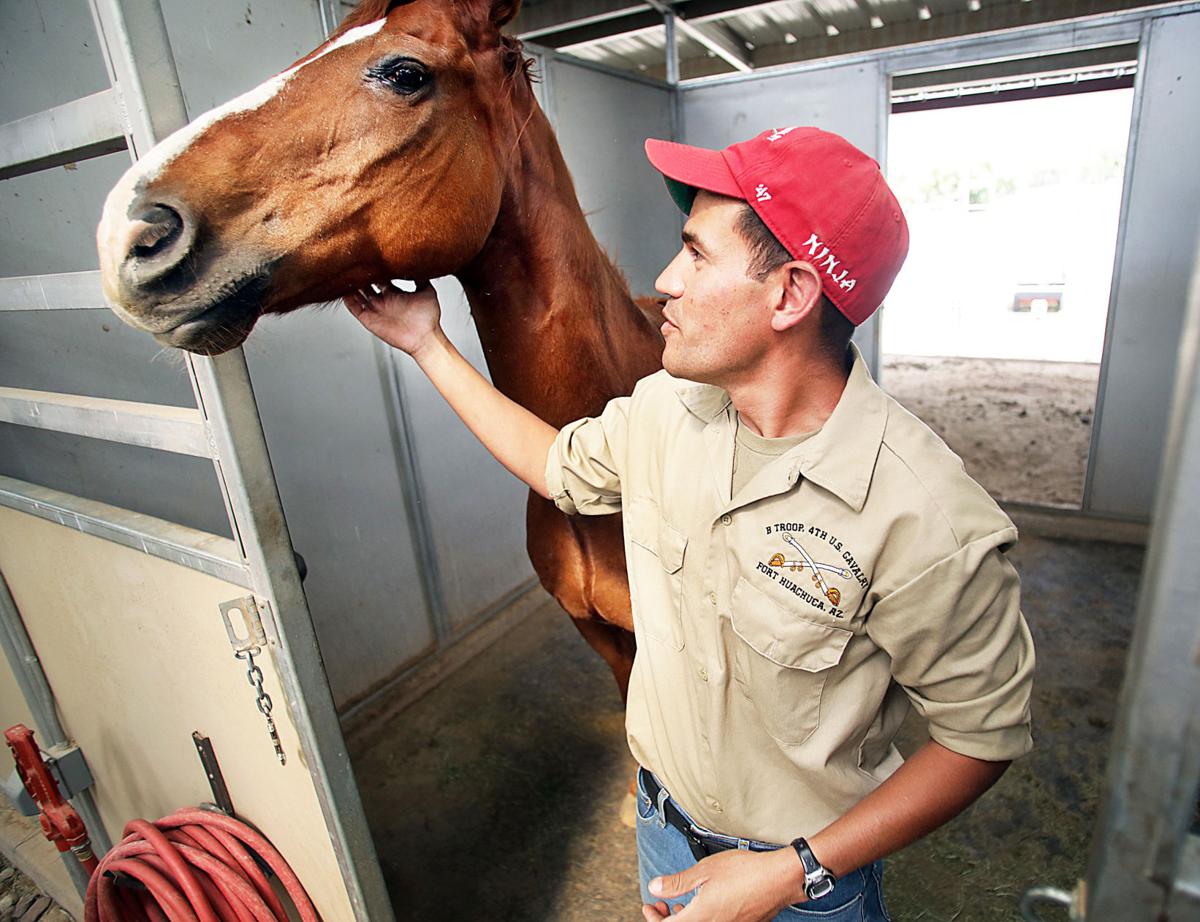 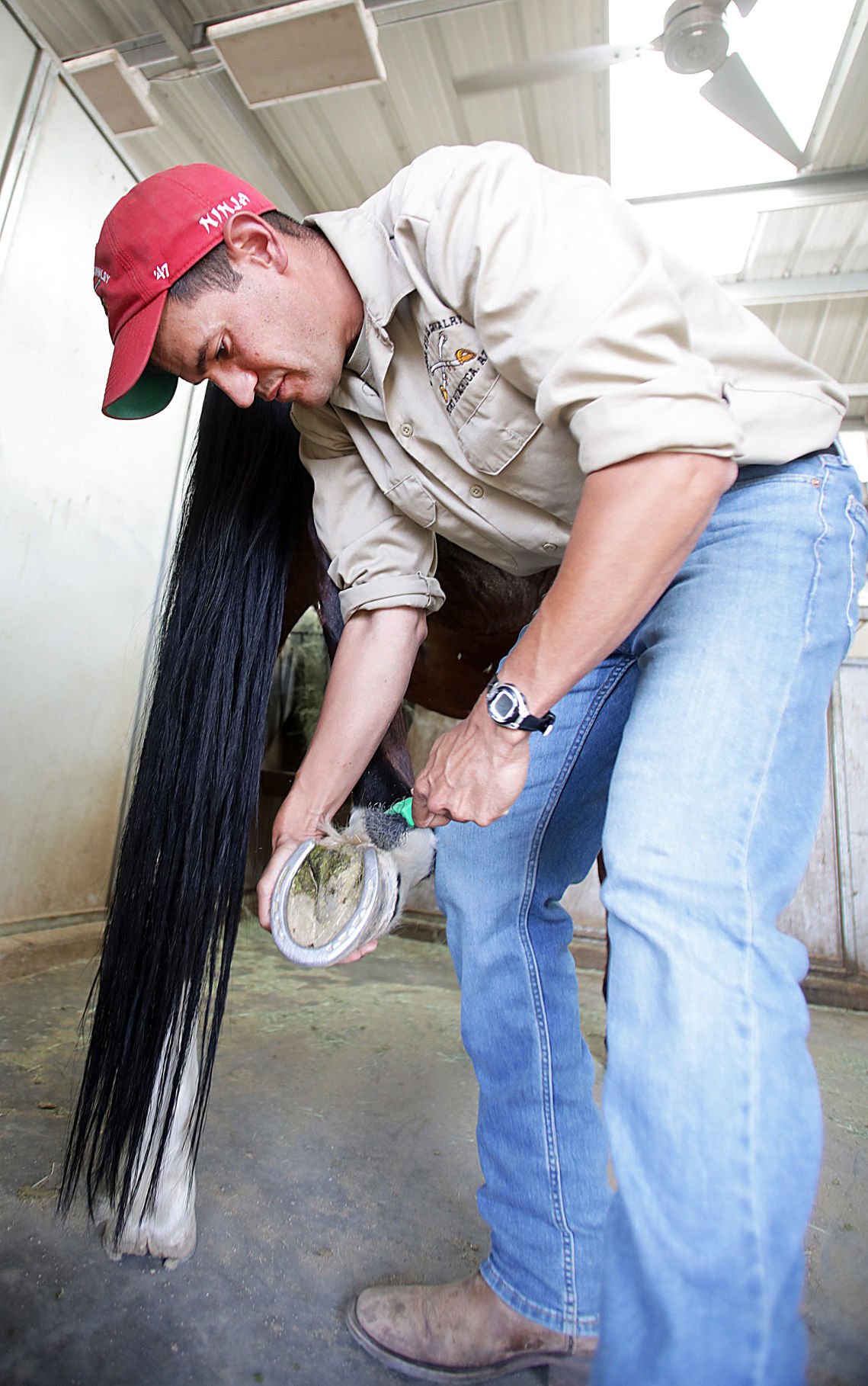 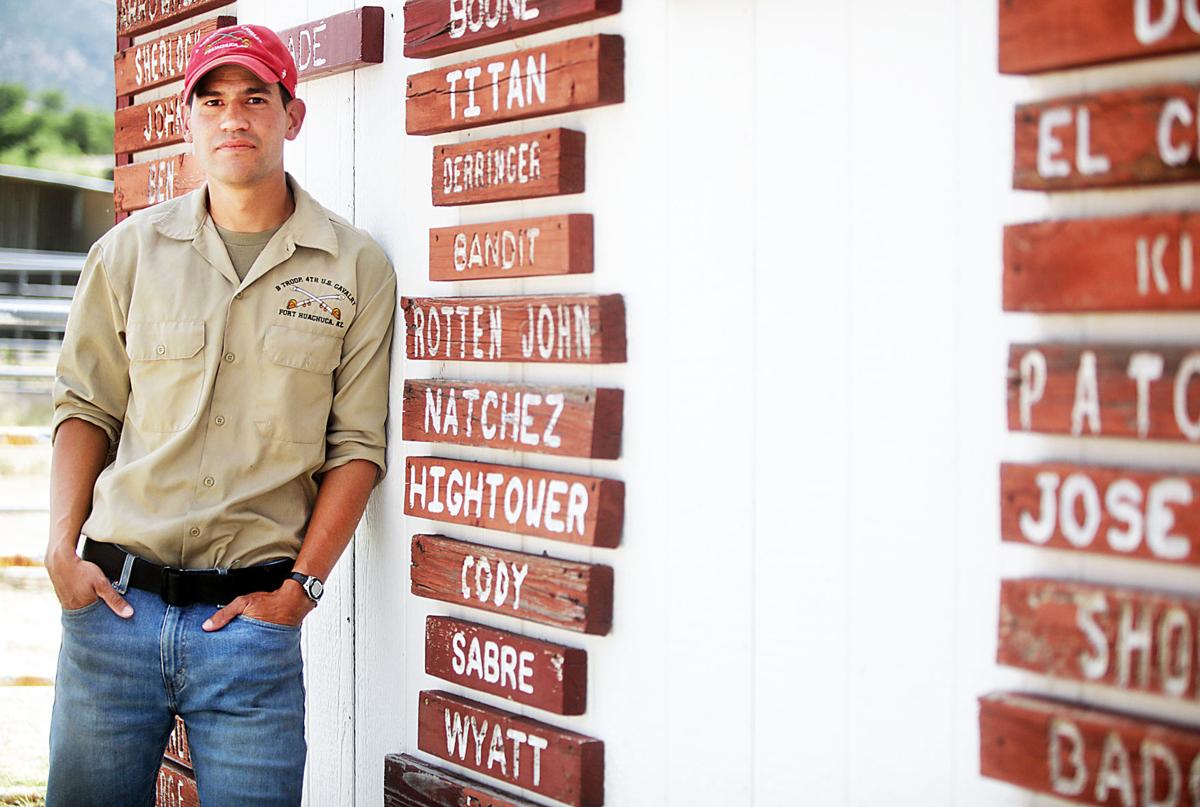 Maj. Eddie Gonzalez, B Troop, 4th Cavalry Regiment (Memorial) commander, stands next to a wall honoring past horses who served in the Fort Huachuca cavalry regiment. 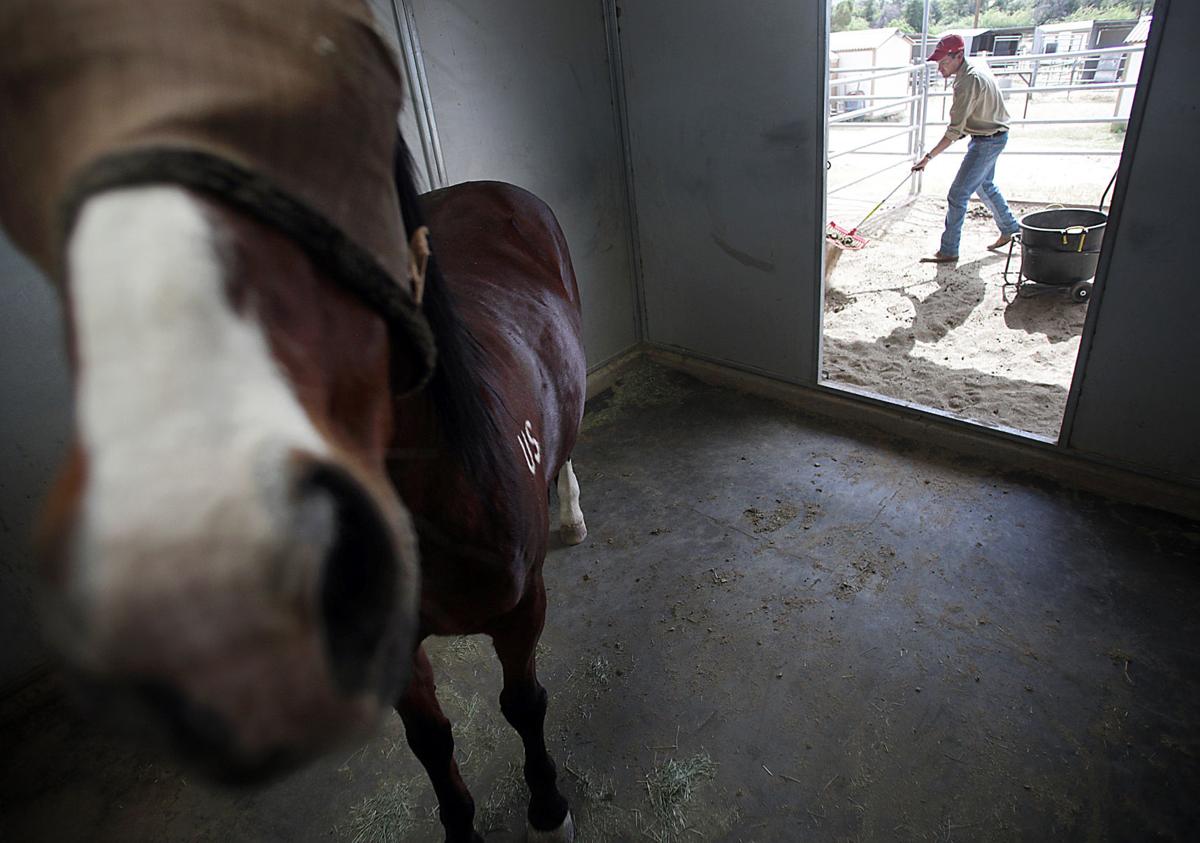 Everyone helps in caring for the B Troop horses, including Commander Maj. Eddie Gonzalez. 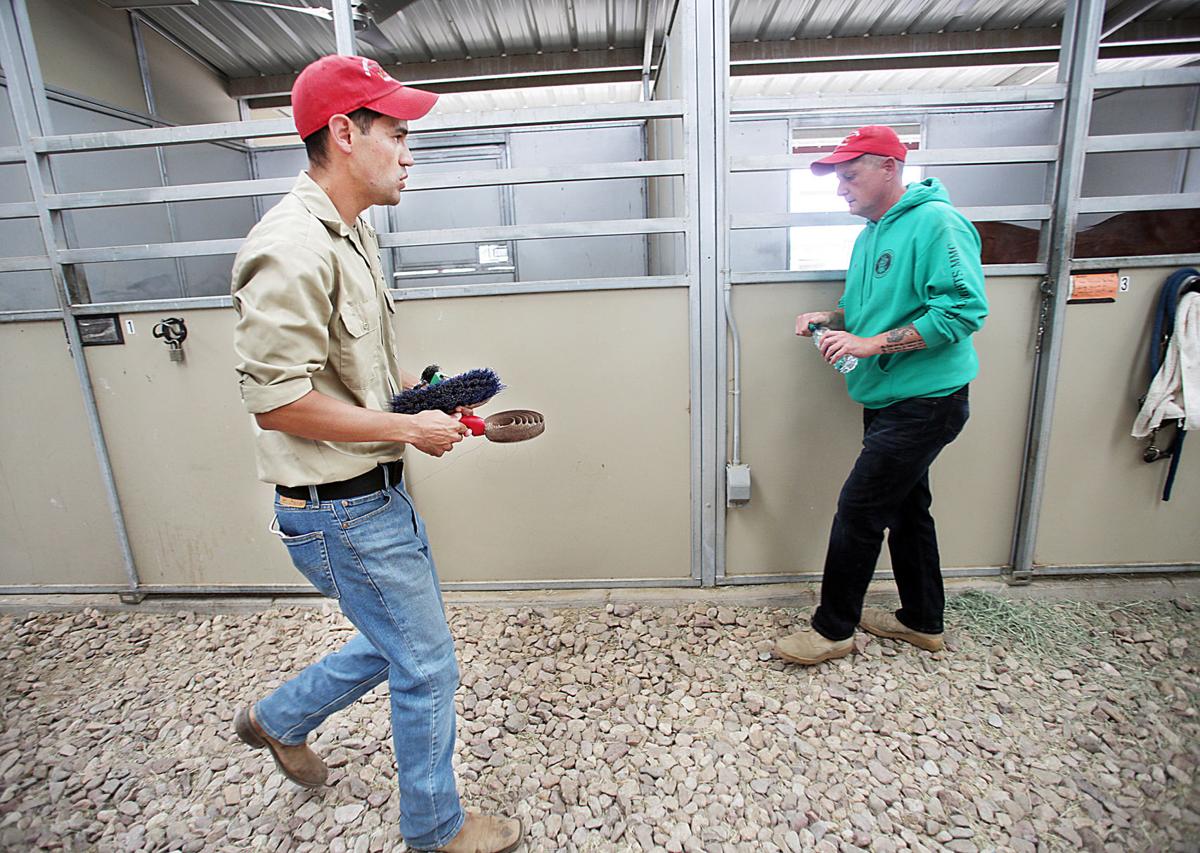 Maj. Eddie Gonzalez, B Troop, 4th Cavalry Regiment (Memorial) commander, stands next to a wall honoring past horses who served in the Fort Huachuca cavalry regiment.

Everyone helps in caring for the B Troop horses, including Commander Maj. Eddie Gonzalez.

FORT HUACHUCA — Being a soldier in the U.S. Army is how Major Eddie Gonzalez serves his country, while being the commander of the B Troop at Fort Huachuca is how he connects with his community.

And that connection was noticeably evident last weekend when Gonzalez and members of Fort Huachuca’s B Troop 4th Cavalry Regiment (Memorial) completed two morale rides through the installation’s neighborhoods.

The intent was to brighten the morning for soldiers and their families in the face of COVID-19. The pandemic has certainly affected those who live on post, because like everywhere else in the world, events have been cancelled, facilities have been closed, and travel restrictions have been instituted.

When Fort Huachuca spokeswoman Tanja Linton learned that another B Troop regiment had done a morale ride, she suggested it and Gonzalez took the reins from there after getting approval from Garrison Commander Col. Chad Rambo.

“If riding a horse in front of someone’s house is going to make them happy, we’re gonna do it,” Gonzalez said Friday outside the stables where the unit’s horses are kept. “That’s pretty much our mission, to represent, be in the public eye.”

“The regiment has fought gallantly in the Indian Wars, the Civil War, the Philippine Insurrection, World War II, Vietnam and the Gulf War. For its wartime service, the 4th Cavalry has been awarded 58 campaign streamers, three Presidential Unit Citations, three Valorous Unit Awards and the French Croix de Guerre with Silver Star.”

The unit is officially established by regulation and funded by the Army. The unit has a zero-manpower authorization and relies on volunteers to fill its ranks. Members are drawn from active duty, reserve, and retired military personnel, Department of Defense civilians employed at Fort Huachuca, and military dependants 18 years of age and older. Members of the unit are uniformed, equipped, and armed in accordance with U.S. Cavalry standards of the 1880s.

“A Ladies Auxiliary supports B Troop, primarily by participating in parades riding sidesaddle and wearing period authentic clothing, and may assist with horse care and training. An artillery section known as K Battery also supports B Troop. These members do not ride, but operate the Troop’s 1840 mountain howitzer at ceremonies and public events.”

Linton said normally the summer months is the time when the installation celebrates various change-of-command ceremonies.

“The highlight is B Troop’s pistol charge across the parade field,” Linton said. “A lot of the things that bring people together have been canceled, so they’re not getting the opportunity to see that.”

“This was it just an opportunity to put smiles on peoples’ faces, to get them outside and just appreciate where we live,” Linton added.

One of the smiles came from Major General Laura Potter’s 5-year-old son. On May 23, after the B Troop completed their final morale ride, the 12 members of the unit and their horses rode to Potter’s residence to inform the commander that the moral rides were done, Gonzalez said.

Potter, in her dress uniform, stood at attention in front of her house, accompanied by her husband and two sons.

After the troop saluted Potter and she congratulated them — telling them “You’ve done so much for the morale. Thank you for your service,” — the youngster asked to pet the horses and one of the riders came forward.

The boy stroked the horse cautiously, then suddenly hugged the massive animal’s neck, much to everyone’s delight.

For Gonzalez, the father of an 8-year-old son, it was a priceless moment. He said doing the rides was “awesome.”

“The greatest reactions were from all the kids,” Gonzalez said. “When we got to that first street I was shocked to see how many kids were already sitting there waiting for us.”

“It’s very unique to have 12 horses walk in front of your house, it was a pretty neat experience. It was really neat to see all those kids in their pajamas.”

Linton said the morale rides were ”very well received by the community.”

“I think if it was up to people, we would do this every week,” she said.

If it were up to Gonzalez, he probably would too. The 36-year-old had always wanted to serve in the military. While in high school in New York City where he was born and raised, Gonzalez applied for an ROTC scholarship for college and received it.

“That was a game changer,” Gonzalez said. “Now I was going to join the military for a whole different reason.”

He entered the Army in 2005. He completed several assignments and missions and saw combat in Kuwait. He joined B Troop in 2015 after learning about horses and developing a love for them.

“I grew up in New York City in Queens, and the only horses I ever saw were in Central Park,” Gonzalez said. “I always thought, ‘That’s a neat animal.’ When I got out here and saw this (the stables and horses) I saw the opportunity and thought I would take it.”

He joined B Troop but was sent to Korea shorty after. When he announced to his fellow troopers that he was ordered to return to Fort Huachuca, he received new “orders.”

“They (the other troopers) said, ‘Guess what? you’re the new commander.’”

As much as he enjoys being in the stables, Gonzalez and other members of B Troop have “day jobs.”

Gonzalez works as a communications officer with the Joint Interoperability Test Command — known as JITC — on post.

But his days on Fort Huachuca begin and end at the horse stables. The same goes for other members of B Troop. Each rider is responsible for the care of their animal from Monday through Friday, Gonzalez said.

On weekends, the horses are let out to pasture so they can “stretch their legs and have some fun,” Gonzalez said. One person is assigned to make sure none of the horses got injured while they enjoyed their weekend romps, and also to feed and water them.

Gonzalez tends to his charges every weekday at 6:30 a.m. before he heads to the JITC. Then he returns to the stables in the afternoon, checks on his horses and chats with fellow troopers.

He sums up one of the goals of B Troop in a few words: “We just want to connect the Army to the community. We do that through B Troop.”