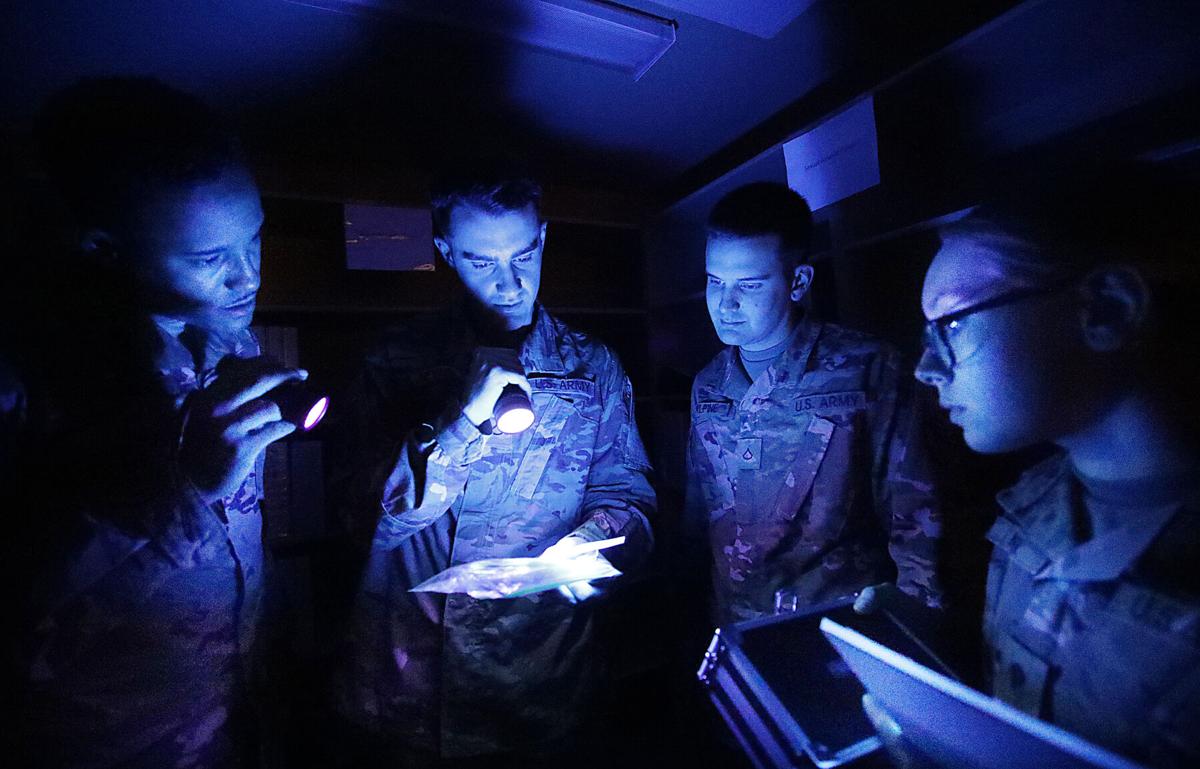 Fort Huachuca soldiers participate in the Sexual Harassment/Assault Response Prevention (SHARP) program Thursday on post. They are searching for certain clues to be able to bring up talking points during the training scenario. The soldiers are, from left, Spc. Corwin Chappell, Pfc. Christian Neves, Pfc. Nik McAlpine and Spc. Mackenzie Milner. 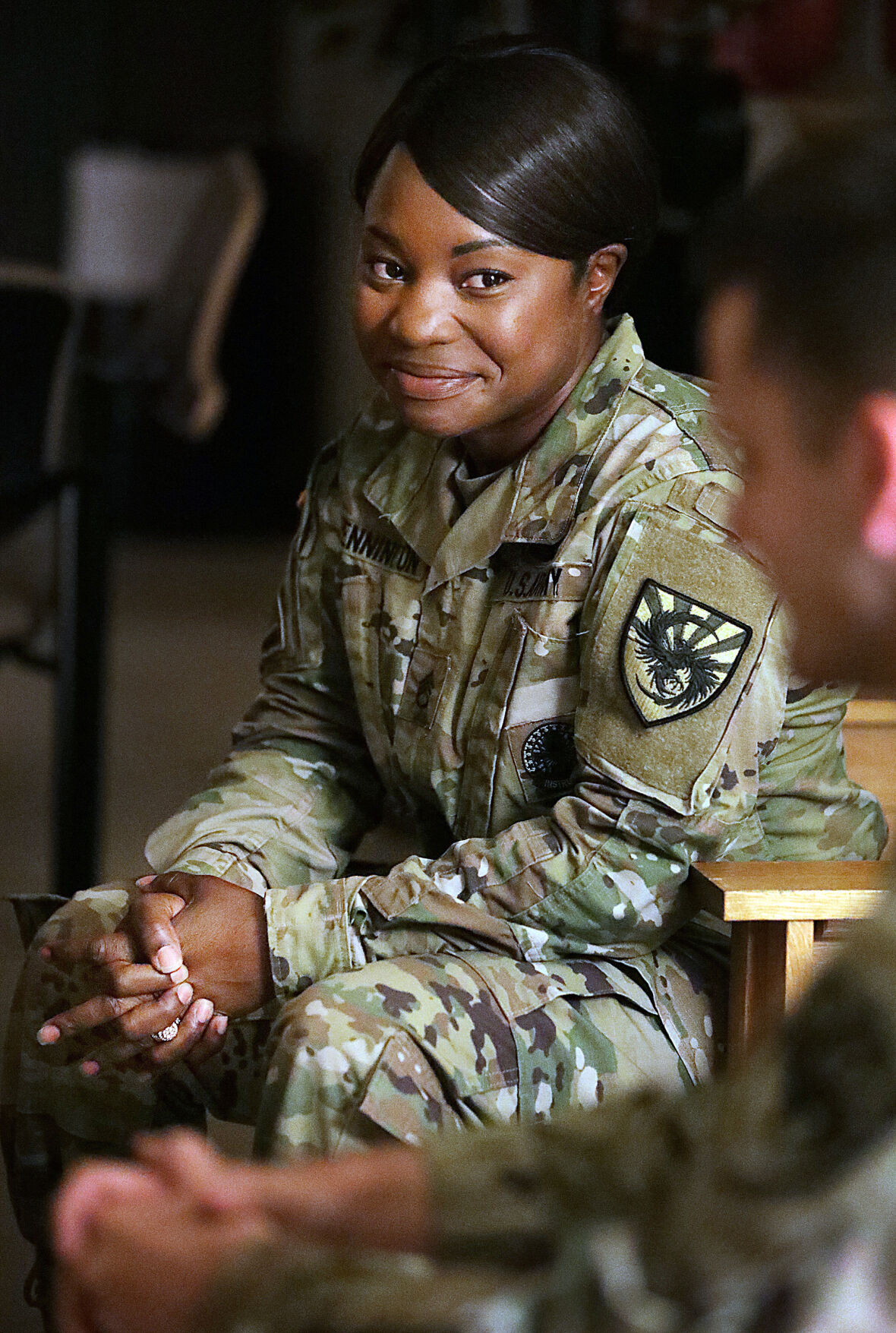 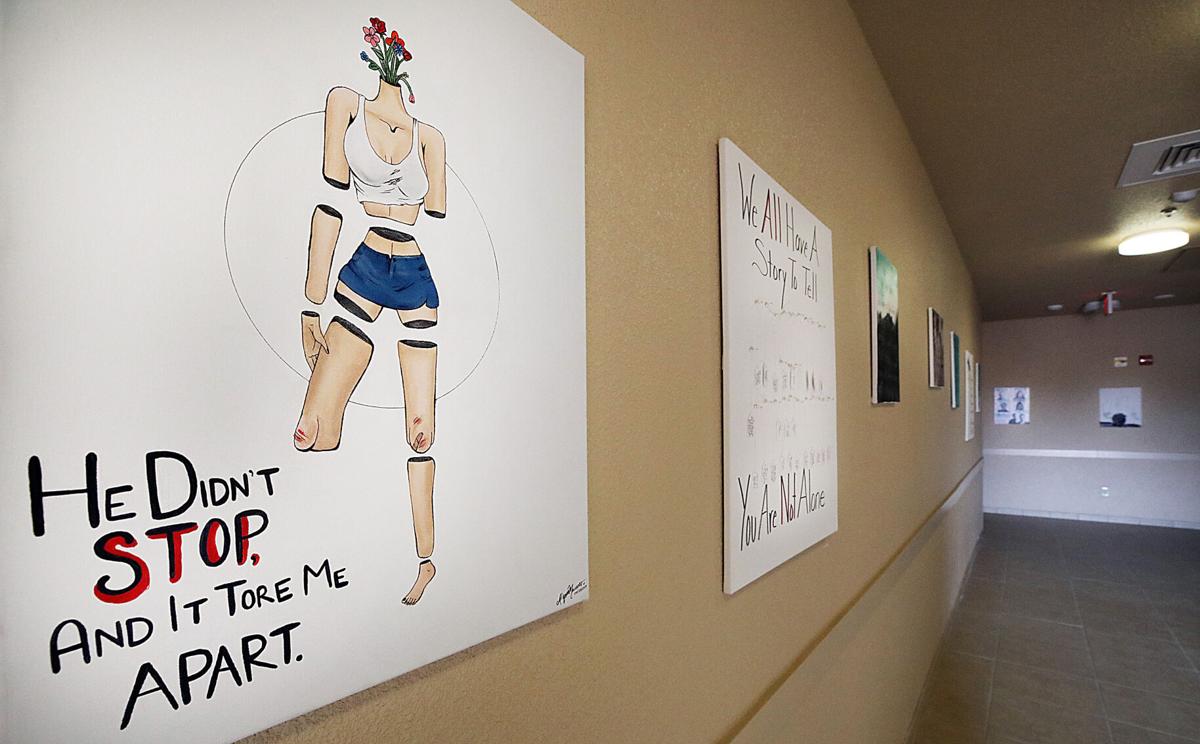 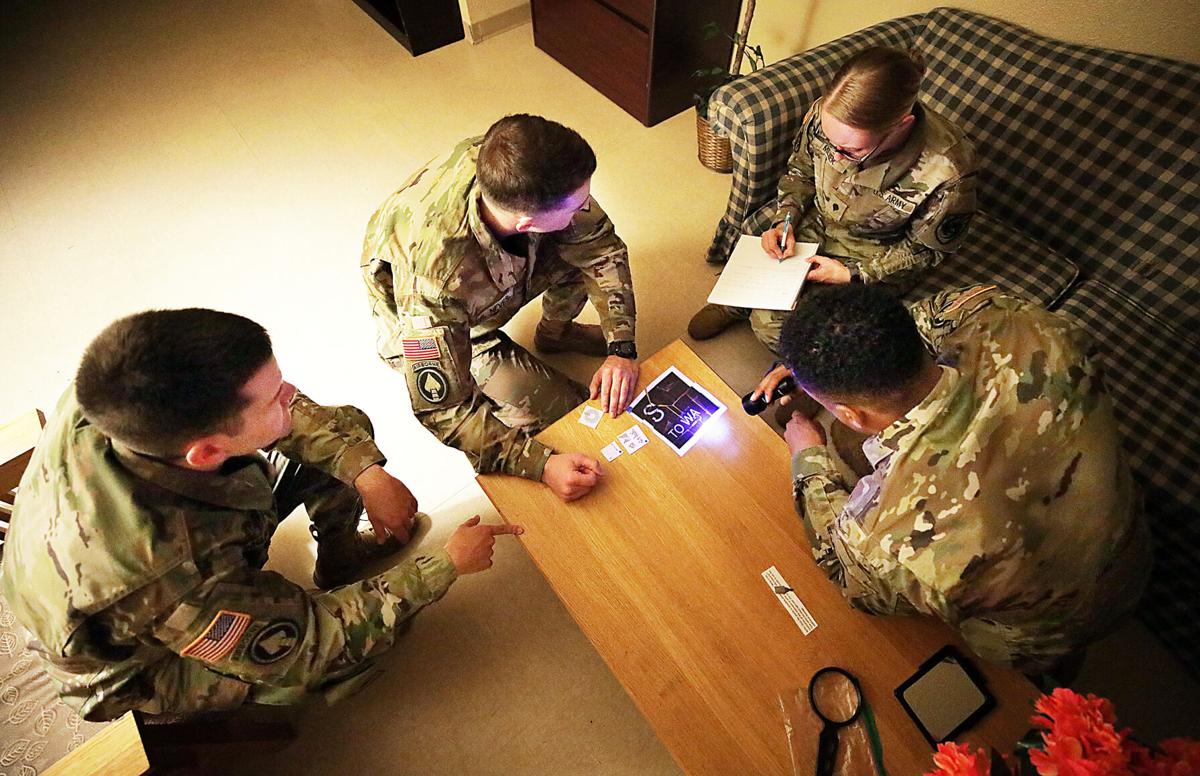 SHARP participants synthesize a mixture of clues during their time engaging in the course yesterday. 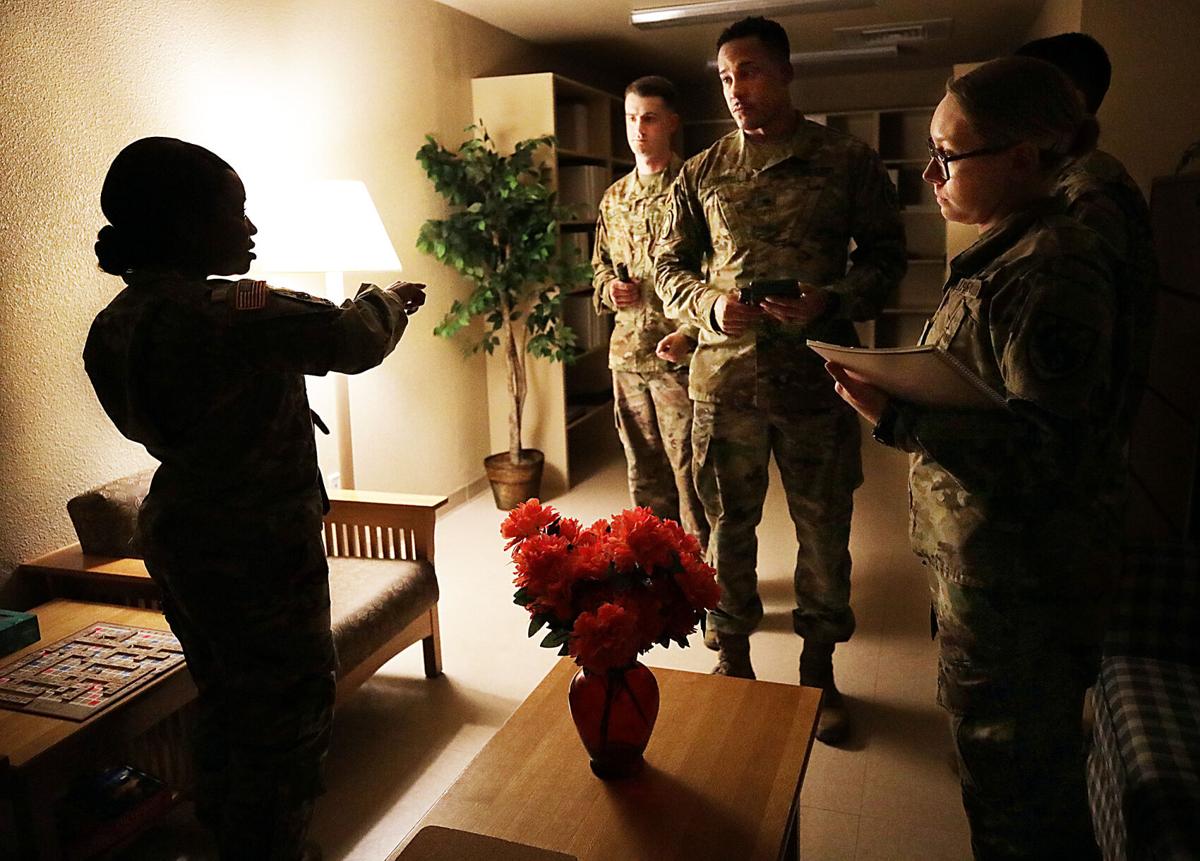 Fort Huachuca soldiers participate in the Sexual Harassment/Assault Response Prevention (SHARP) program Thursday on post. They are searching for certain clues to be able to bring up talking points during the training scenario. The soldiers are, from left, Spc. Corwin Chappell, Pfc. Christian Neves, Pfc. Nik McAlpine and Spc. Mackenzie Milner.

SHARP participants synthesize a mixture of clues during their time engaging in the course yesterday.

FORT HUACHUCA — Four soldiers sweep through a dimly-lit escape room on post searching for clues that relate to sexual harassment and assault and that will ultimately teach them how to help someone in need.

When they are done collecting their clues, they sit at a table, decipher what they found hidden inside the space, and begin putting together a scenario about someone who has been sexually assaulted.

The soldiers are tasked with providing resources and support to the person — a fellow soldier — so the person affected can get help.

The training is meant to be engaging, but intense, and the purpose is to teach soldiers that sexual harassment and sexual assault is not to be tolerated and must be reported. But it also teaches them what they can do to help a peer who might be a survivor of sexual assault or harassment and may be too frightened or ashamed to say so.

Staff Sgt. Saquawia Pennington is the SHARP Instructor and facilitator of the exercise and also the creator of this particular escape room designed around the issue of sexual harassment and assault.

While soldiers receive SHARP instruction in basic training, Pennington wanted to create an environment where they would actually be interacting and coming up with solutions — based on the clues they collect — to help a struggling soldier who may have nowhere to turn in the face of a devastating situation such as sexual assault.

Pennington, the mother of four children, set up the SHARP Escape Room at Fort Huachuca in January 2019.

“I wanted to have more time with the soldiers teaching them about SHARP, but in a fun way,” Pennington said. “All the clues are associated with the SHARP program and they are all terms that they learned in their training.”

Pennington explained that the clues are “talking points” and once the soldiers are finished collecting them, “they’re able to apply what they’ve learned to a victim of harassment or assault to get the victim the proper help they need.”

When the soldiers sit down and begin putting together the clues they’ve found, Pennington helps them decipher what’s in front of them. She reveals that she is the “victim” they’ve been looking for and poses a scenario that includes a female soldier who wakes up nude after a night at the bar and she has no idea what happened to her.

She asks the four soldiers in front of her: “Can you help me?

Each soldier provided Pennington with a solution based on what they’ve learned in their training and based on the exercise they just completed in the SHARP Escape Room.

One of them — Specialist Corwin Chappell, an intelligence analyst — ended the scenario with, “I’m there for you.”

The four soldiers said the exercise inside the escape room was a powerful and necessary one.

“That was heavy. I wasn’t expecting it,” said Chappell. “I think it was necessary to have that confrontation moment of actually having to deal with something like that. In theory we get to learn these things. Until you actually have to face someone with an actual issue, to actually have compassion and actually get to project that, I think that’s important.”

Private First Class Christian Neves, Intelligence Collector, said he realized that he may not have caught inappropriate comments made in group settings in the past. But after this training, he said he needs to be the one who steps up and says something if someone is being harassed.

The only female soldier among the four students, Specialist Mackenzie K. Milner, Intelligence Analyst, said the training they received Thursday is a start to ending a culture that has existed for a long time.

“It’s extremely important,” said Milner of the training. “Unfortunately there’s a culture that has to be fixed in the Army, in the military, and even in the civilian world, as well, and this training is the first step to change that culture.”

For Pennington, a 36-year-old with almost 20 years in the Army, the passion behind creating the escape room was fueled by the pain she suffered as a victim of assault in the Army.

“I joined the army at the age of 17 and there was a lot I didn’t know at that time,” she said. “And as a result I recognize that I may have been taken advantage of.”

“I was assaulted in 2015, that was a very difficult time for me,” Pennington added. “I contemplated getting out of the military. I didn’t want to be here anymore. But when I saw what it is I could give to the next soldier in training and teaching...the excitement on their faces was somewhat of a release for me.”

The SHARP Escape Room at Fort Huachuca has been so well received that it’s expanding to another building on the installation that will include 13 rooms, Pennington said.

Additionally, Pennington has prepared a “training support package” so that other Army installations can establish their own SHARP escape rooms.

“I’m very passionate about this because I believe this can help a lot of other people,” Pennington said.