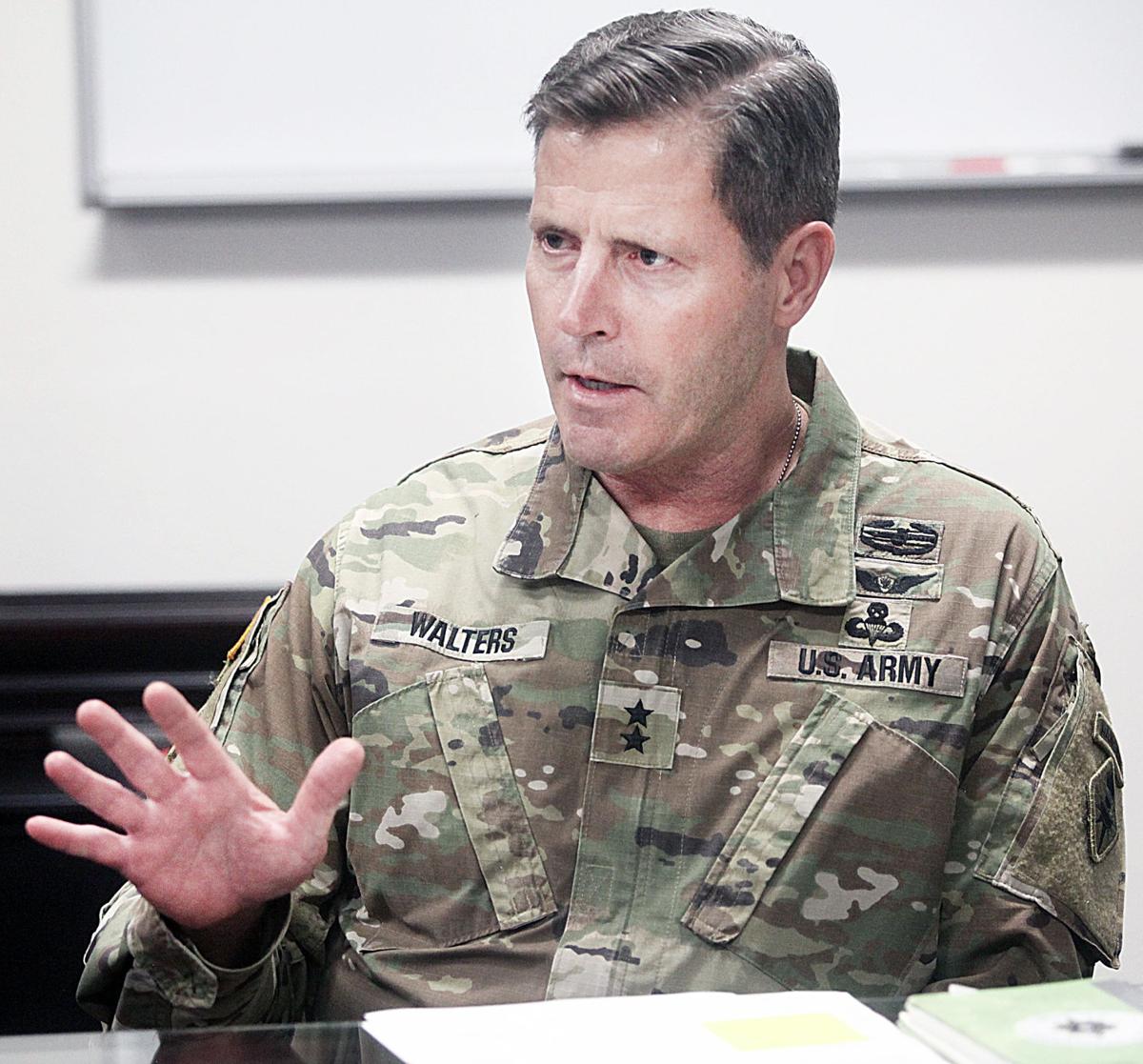 Major Gen. Robert Walters, commanding general of Fort Huachuca and the U.S. Army Intelligence Center of Excellence, has retired from his career in the Army. 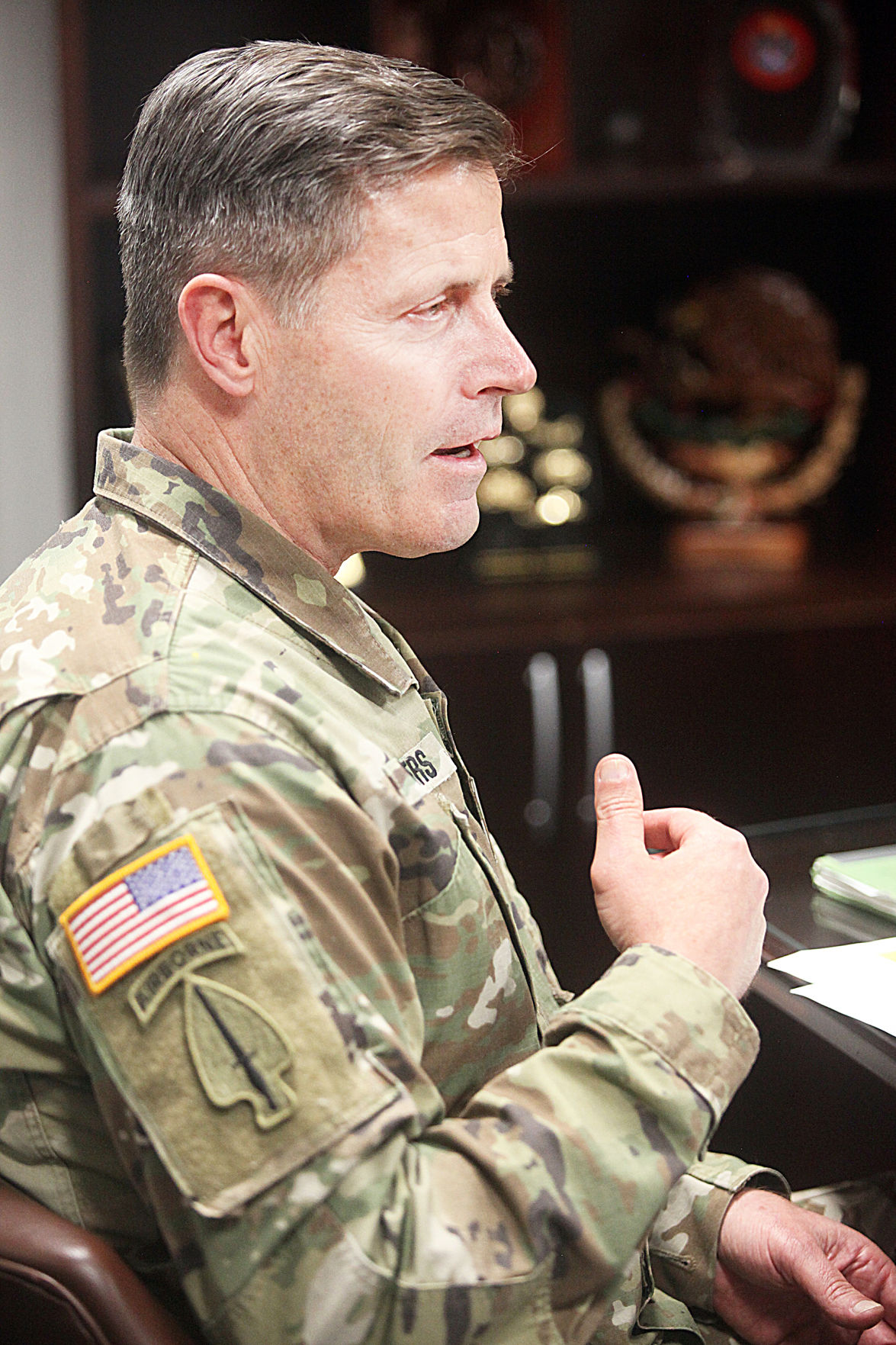 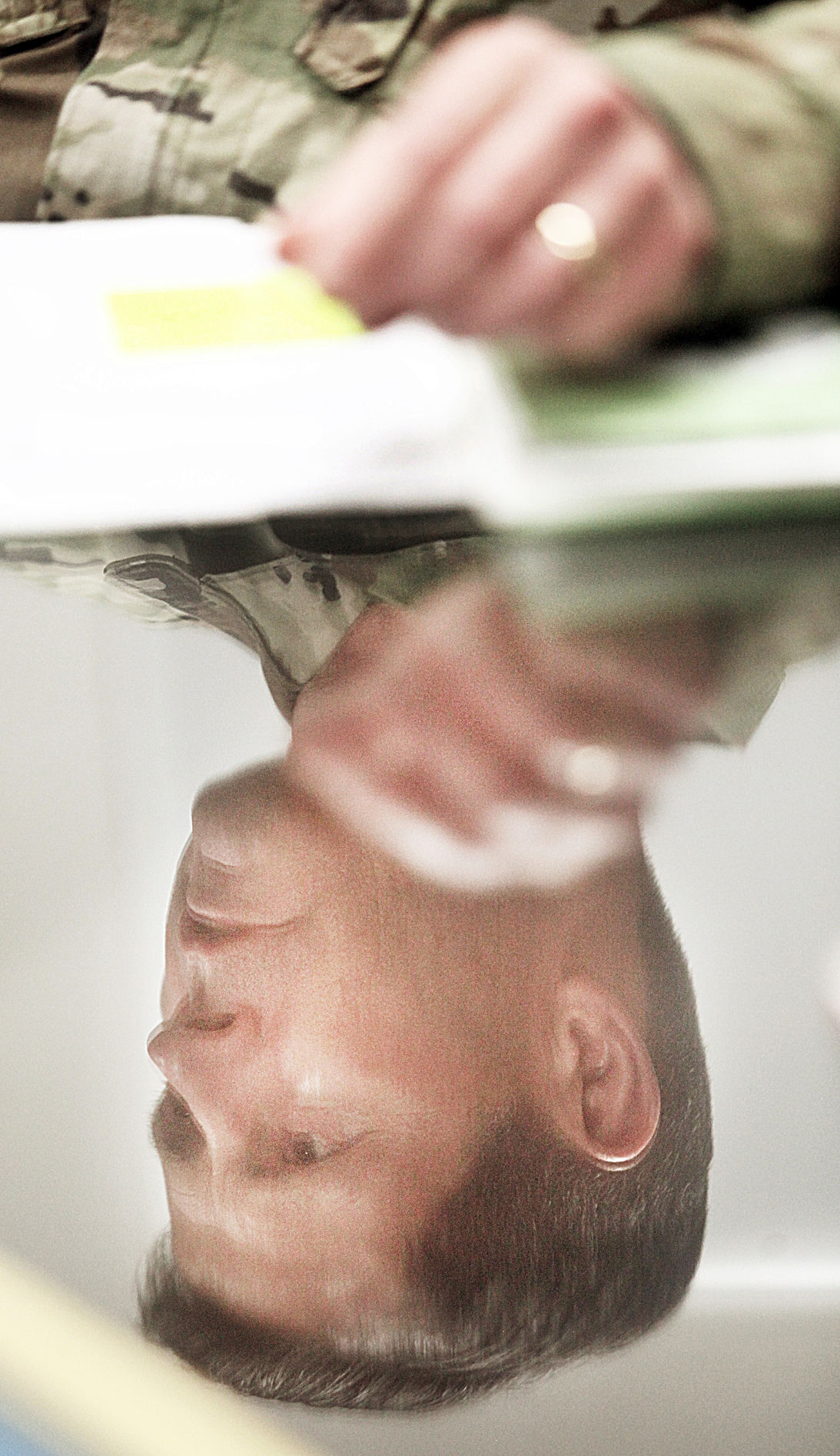 The reflection of Maj. Gen. Robert Walters can be seen during his recent interview on post.

Major Gen. Robert Walters, commanding general of Fort Huachuca and the U.S. Army Intelligence Center of Excellence, has retired from his career in the Army.

The reflection of Maj. Gen. Robert Walters can be seen during his recent interview on post.

FORT HUACHUCA — His background is more than impressive and he just retired Friday as the top soldier at Fort Huachuca. But sit down with U.S. Army Maj. Gen. Robert Walters and you soon realize that he is an unassuming, engaging and downright friendly guy.

With his wife Nancy by his side Friday morning, the 57-year-old Walters handed over command of the U.S. Army Intelligence Center of Excellence and Fort Huachuca to his successor Maj. Gen. Laura Potter. He was at the Fort for two years.

Now, Walters — who was the 100th resident of the Pershing House on Fort Huachuca — is ready to get down to the task at hand — move to Kansas, have some fun with his five grandchildren and do some serious hunting with his Gordon Setter, Jamison.

The general sat down with the Herald/Review and answered a few questions about life as a military man, Fort Huachuca and his retirement plans. The Herald/Review was not permitted to record the conversation; what follows are highlights of the newspaper’s interview with Walters.

Herald/Review: What prompted your military career?

Gen. Robert Walters: My father was in the Army. Nancy’s father was in the Marines. I was working at a paper mill in Florida when I was in college. One day I came home and Nancy was crying. She said she was pregnant and we had no insurance. So we went down to the Blue Cross Blue Shield office and said we needed insurance and that my wife was pregnant. They said pregnancy was a pre-existing medical condition and we could not get insurance. That’s when I went down to the Army recruiter’s office and told them I wanted to join. I also told them I need a job that day! That was in 1981.

HR: Where were you born?

RW: I was born at Fort Bragg, North Carolina.

HR: Tell us a bit about your early years before you enlisted in the military.

RW: I grew up in an Army family. I went to high school in Leavenworth, Kansas and that’s where I met Nancy. The last thing her father wanted was for her to go out with an Army man. So, I started out way at the bottom (with him.)

HR: What are you most proud of in your time at Fort Huachuca?

RW: Several things. The first is tied to training. We’ve had 20,000 graduates from the intelligence center at Fort Huachuca. We’re an academic institution. We just got accredited a year ago and that’s something I’m very proud of. Army values (is another thing I’m proud of). We are a value-based institution and I like to remind people of that — gently. When you come into Fort Huachuca you see our values (posted at the entrance) — loyalty, duty, respect, selfless service, honor, integrity and personal courage. That’s how I remind people gently.

Another thing I’m very proud of is that we ensured that we get to keep Troop B. They are volunteers who wear uniforms from the 1800s and they’re on horseback. They’re active Army and retired Army and they appear at Change of Command and other events here and in the community. A year and a half ago installation command wanted to cut funding for B Troop. But Gen. Paul Funk — a four-star general — signed off on us being able to keep B-Troop into the future. It’s a great thing for the Army to have.

HR: What have been the most challenging aspects of your position, both in general and personally?

RW: Too much travel. I’ve been trying to do only one temporary duty a month. I tell my office to prioritize my calendar. I tell them to do Army math. I’m a major general and I’m at category 08 in the Army. My boss is a 09 and his boss is a 10. So if 09 tells me to be somewhere, I have to be there. But if 10 tells me to be somewhere at the same time, then that’s Army math. Number 10 is the boss of 09. So I do what 10 tells me. That’s Army math! I’m most happy when I’m out talking to lieutenants and privates about the Army.

HR: How would you describe your leadership style?

RW: I like to be out front with the soldiers. I also like to ask them questions. When I go out to talk to them, I don’t say, ‘Does anyone have a question?’ They know that when I come to them, they will have a question. I try to be engaging.

HR: You served overseas in combat for at least five years. What would you tell soldiers who are facing that predicament?

RW: Volunteer to go. Listen to your boss. You need to listen to boss because that can make the difference between life and death. You need to volunteer because we want to fight at the away game, not the home game.

HR: What does that mean?

RW: It means if we’re fighting with Iraq (for example) we don’t want Iraq to come here. We want to fight over there. That’s the away game. Let’s be prepared to go anywhere and fight tonight, and win.”

HR: What advice do you have for a young person who is thinking of joining the military?

RW: Join. Join. Join. It’s a great way to start. The Army offers so much. When you look at what the Army does as compared to any civilian employer, we beat them hands down.

HR: Where will you be living once you retire?

RW: Leavenworth, Kansas. That’s where I met Nancy and that’s where her five siblings live. We bought a house there. Every time I was deployed, Nancy would go back there. She began decorating the house and I’ll tell you the secret to being married 38 years. She would send me pictures of different (paint) colors and would ask me which one I liked. My answer was always, “whichever one you like honey.” And never ask how much something costs!

HR: Why are you retiring?

RW: To spend more time with family, specifically my wife Nancy in our home in Kansas.

HR: What fun things do you have planned for your retirement?

RW: I’ve been pricing fishing boats. I’m a pick-up guy. But I’ve never pulled anything with it! There are plenty of lakes in Kansas so I’m getting a pontoon boat. I’ll get the daughters, their husbands and all the grandkids on there and we’ll go fishing. I’ll also go hunting with Jamison.”

HR: What legacy do you leave behind at Fort Huachuca?

RW: I don’t want to say I’m leaving a legacy because that would be presumptuous of me. (Instead, Walters described some of the points he touched upon while at Fort Huachuca.)

Tactical intelligence training. The importance of doctrine. Our nation expects professional soldiers to know doctrine. IPB (Intelligence Preparation of the Battlefield) and our relationship with the community: The Sheriff’s Office, the mayor, the U.S. Border Patrol, the Naco border station, etc. We are tied to those guys and we (Fort Huachuca) work very closely with them. We are always doing outreach with the city and county. We also work very closely with our senators Kyrsten Sinema and Martha McSally and representative Ann Kirkpatrick.