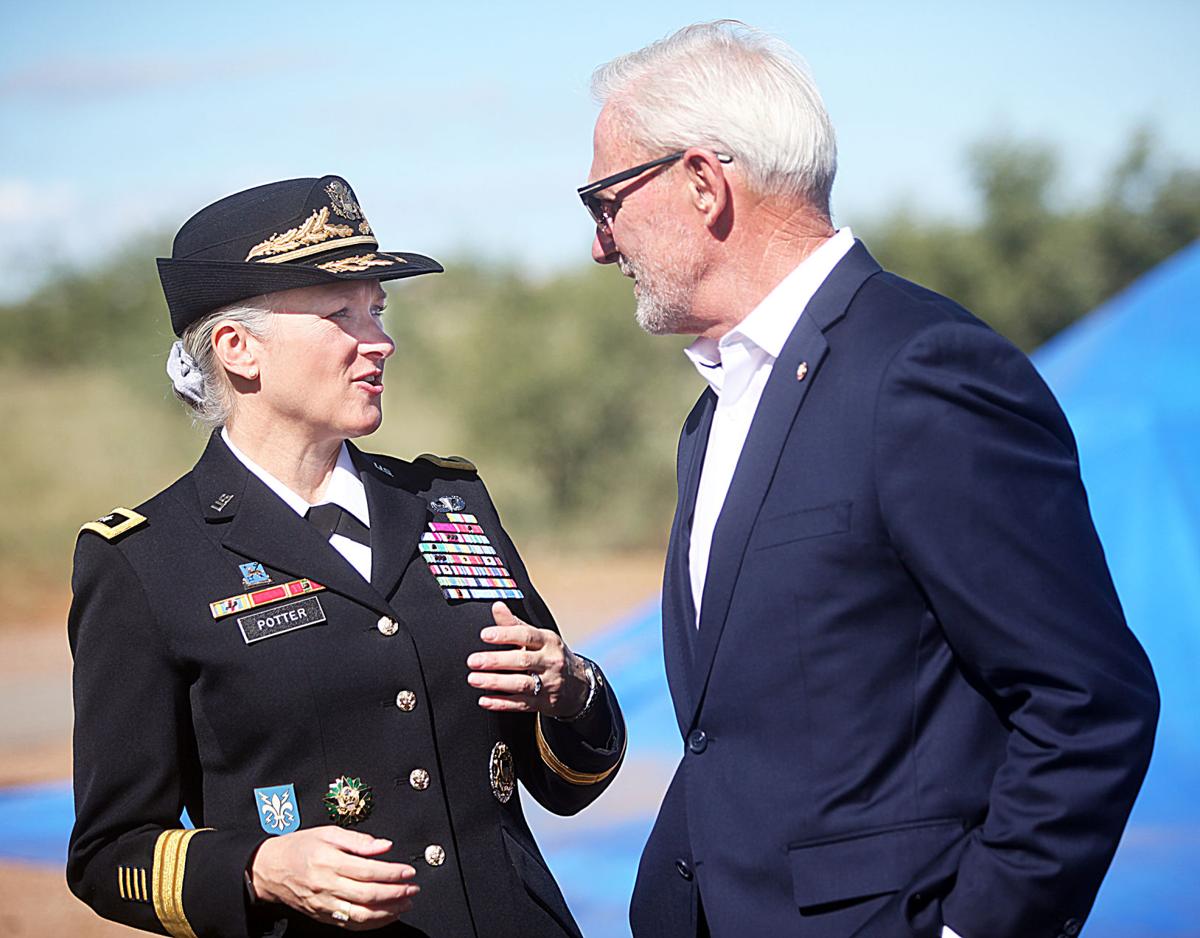 Maj. General Laura Potter, seen here at a memorial dedication for Gold Star families last year, said the event was one of her most memorable moments during her time as commander of Fort Huachuca. 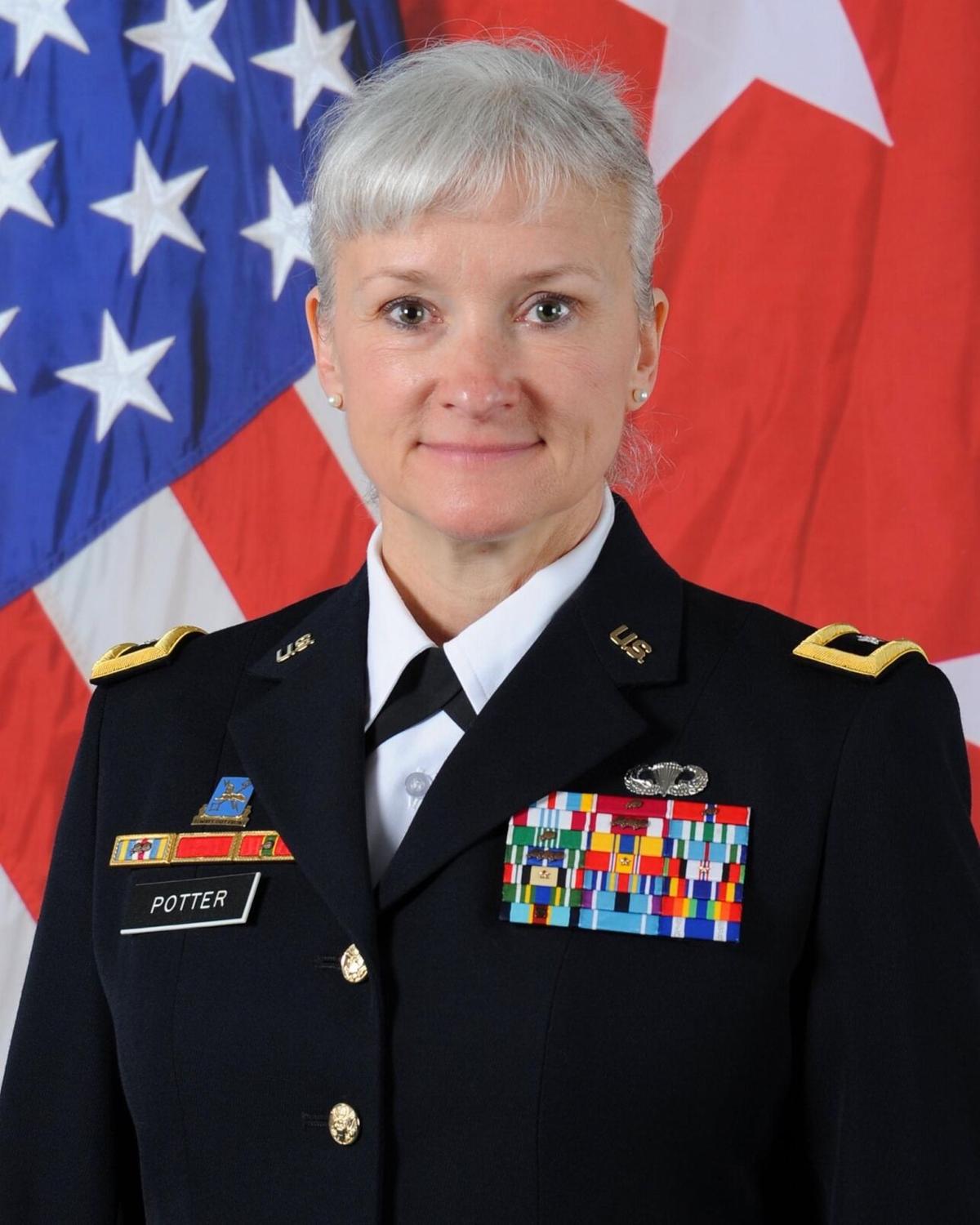 Maj. General Laura Potter, seen here at a memorial dedication for Gold Star families last year, said the event was one of her most memorable moments during her time as commander of Fort Huachuca.

FORT HUACHUCA — She is heading to the Pentagon where a new assignment awaits, but leaving this mountainous and nature-filled installation behind is almost bittersweet for Army Major General Laura Potter.

The commanding general of the Army’s Intelligence Center of Excellence and Fort Huachuca will hand over command of the post on Tuesday morning in a ceremony at Brown Parade Field. The new top soldier at Fort Huachuca will be Brigadier General Anthony Hale, who will be promoted to the rank of major general.

Potter, who now becomes a lieutenant general, will then head for Washington D.C. where she begins her new post in September as Deputy Chief of Staff, G-2, United States Army.

In an interview Thursday with the Herald/Review, the major general, and mother of two boys, said she is “very excited” to begin her new assignment. “I’ve been an Army intelligence officer for 31 years,” she said, but leaving Fort Huachuca saddened her and her family.

“I think my family was sad,” Potter said. “We looked forward to living at Fort Huachuca for two years. But we have resilient Army kids and they are now excited for the next adventure.”

“My oldest son lived in four different places before he turned 4,” said Potter, who is married to Randy Potter, a retired Army lieutenant colonel. The couple met at Fort Huachuca in 1989.

The major general was named commander of Fort Huachuca in July 2019. Usually the term of command is two years, but Potter was tapped to replace Army Lieutenant General Scott Berrier, who was recently chosen by President Trump to head the Defense Intelligence Agency. The U.S. Senate confirmed Potter for her new position on July 30.

She said she leaves the post with many good memories, both professional and personal.

“I hit the ground running,” Potter recalled on her first days at the post.

The major general explained that she fulfilled three roles at the installation: branch proponent for intelligence, commandant of the schools on post and commanding general. According to the Army’s website, a branch proponent leader is the commandant or the chief of a branch of the Army with execution of training, leader development, education, and personnel responsibilities for their designated branch.

“All three roles have been extremely rewarding,” Potter said.

Of course, Potter took over way before “COVID-19” and “social distancing” were part of the daily lexicon. But the last several months of her command have definitely been challenging as the major general had to implement various restrictions on her troops in order to keep them and their families safe and healthy.

Training missions had to continue in the schools on post, as well, and again, tight restrictions were employed to make sure soldiers remained focused.

For 20 weeks Potter also hosted Facebook Live COVID-19 Town Hall sessions along with members of her command team and public affairs staff, where they addressed soldiers and the public on the latest movements on Fort Huachuca concerning the virus.

Every week, the major general came across as a calming force in the face of pandemic panic, as she assured viewers that she and her team were taking every precaution to keep the soldiers and their families safe and moving forward in their missions and training.

A couple of times she was joined by her 5-year-old son Robbie, who helped the major general demonstrate how to properly don a face mask.

Potter also reflected on the installation’s connection to the Sierra Vista community and how she was a part of that.

“I’ve always said that despite the fact that there is a gate around Fort Huachuca, we really are one community,” she said. Potter mentioned that about 70 percent of the military workforce of Fort Huachuca lives in the Sierra Vista area, rather than at the base.

The relationship isn’t lost on others.

“That connectedness helps make this community feel seamless, and she represents all of us in saying we are eternally grateful for the wonderful support we receive here in Sierra Vista and Cochise County,” said Potter’s public affairs officer Meredith Mingledorff, in an email to the newspaper.

Potter also said she and her family have been embraced by Sierra Vista Mayor Rick Mueller and members of the City Council, as well as officials at the colleges in the area.

While Potter said she had several memorable moments while at Fort Huachuca, she said there are three community events she participated in that she won’t soon forget — the Gold Star Families Memorial Dedication held at Southern Arizona Veterans Memorial Cemetery last October; Mayor Mueller’s Veteran’s Day Memorial Service at Veterans Memorial Park; and the Tour of Homes fundraiser on post last December hosted by The Ladies Auxiliary of B-Troop.

Potter mentioned that the first two events were especially moving because they demonstrated the community’s ardent support for the military and Fort Huachuca.

THE MORNING BLEND: Top headlines delivered to you

Well, our email system is down once again, but we are still bringing you all the top headlines you need to know to get your week started. Find…