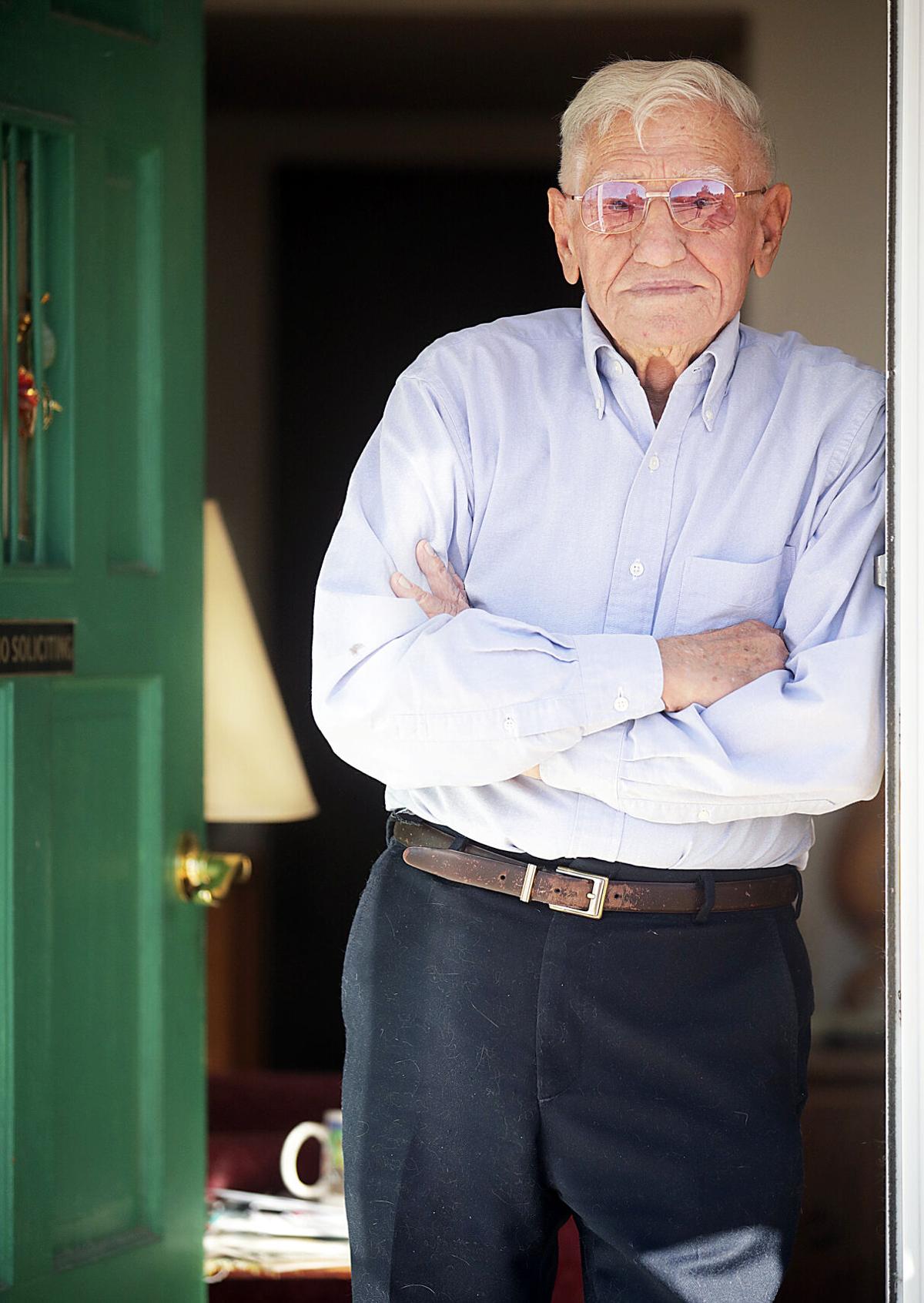 World War II veteran Gilbert Perry stands at his home in Sierra Vista. The 95-year-old served in the Coast Guard as a 17-year-old in 1942. 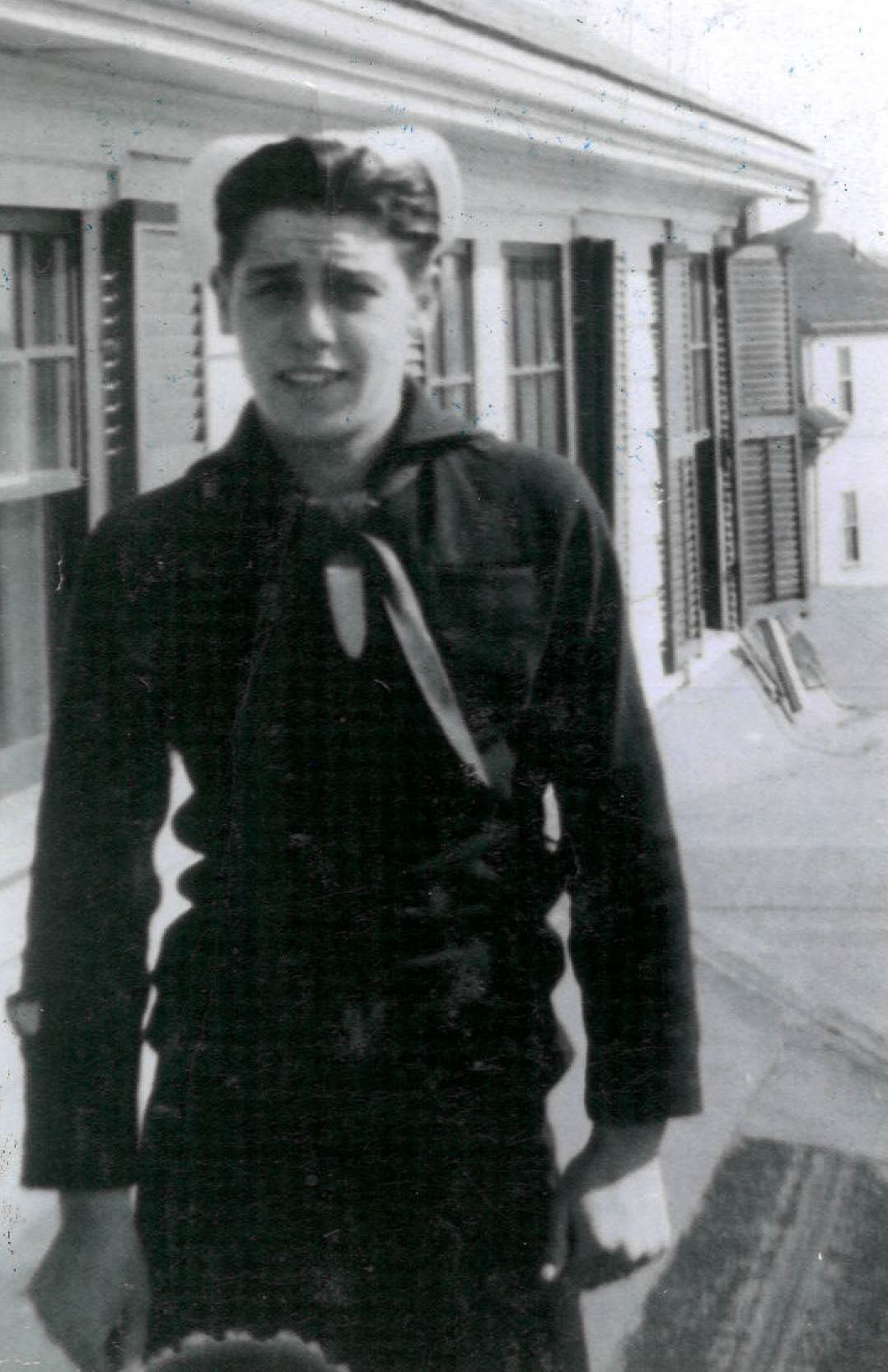 Gilbert Perry at 17 just before shipping out with the Coast Guard. 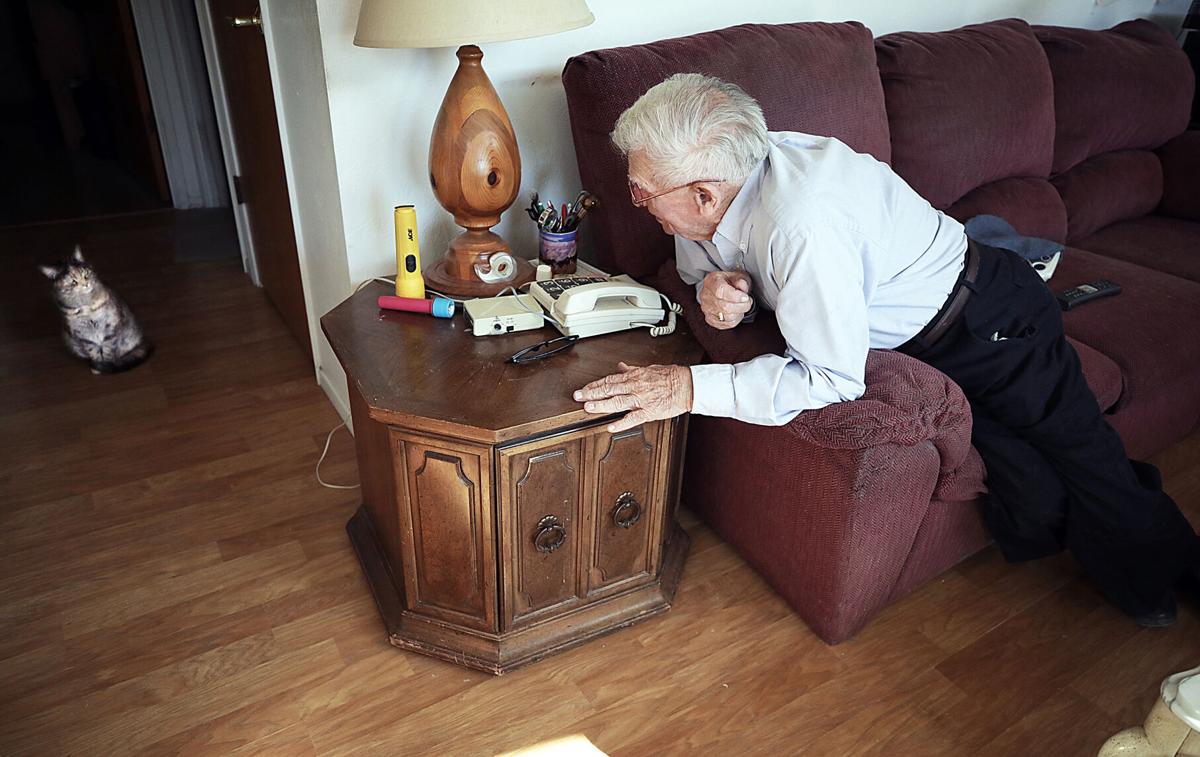 Sierra Vistan Gilbert Perry chats with one of his three cats. 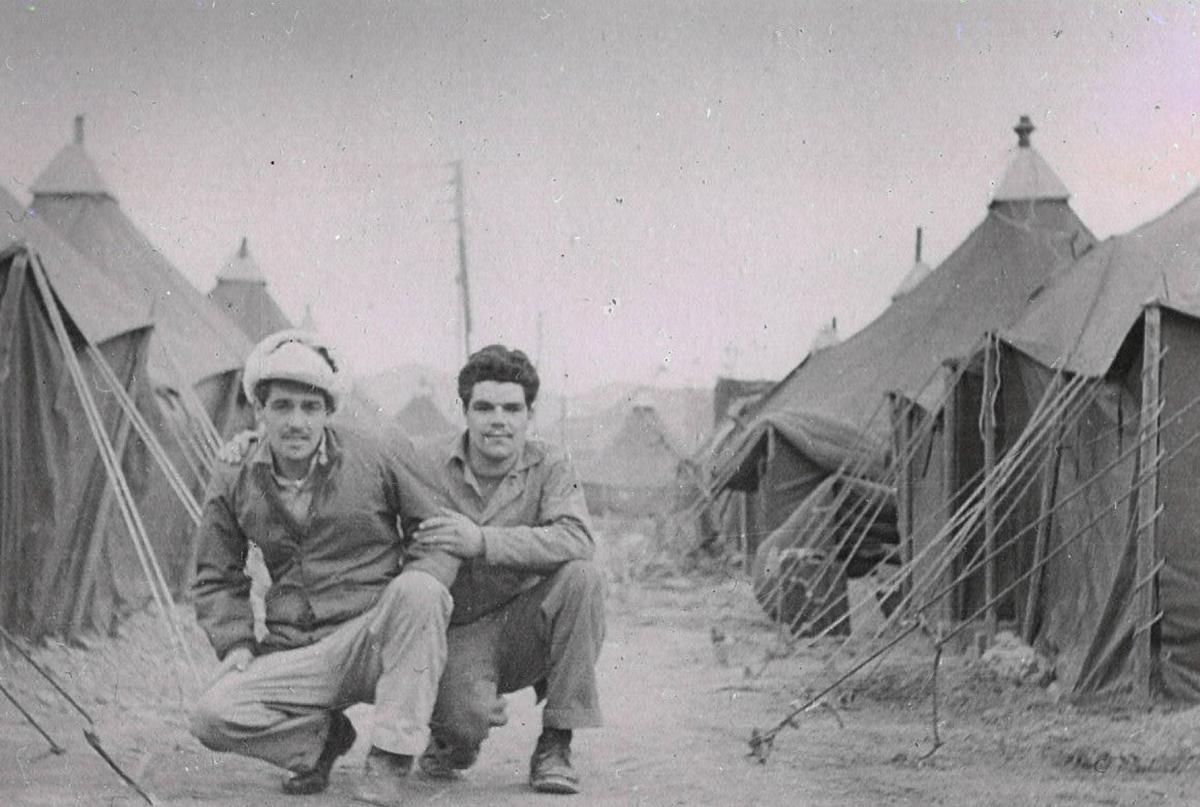 Gilbert Perry with his younger brother, Armand, during the Korean War. 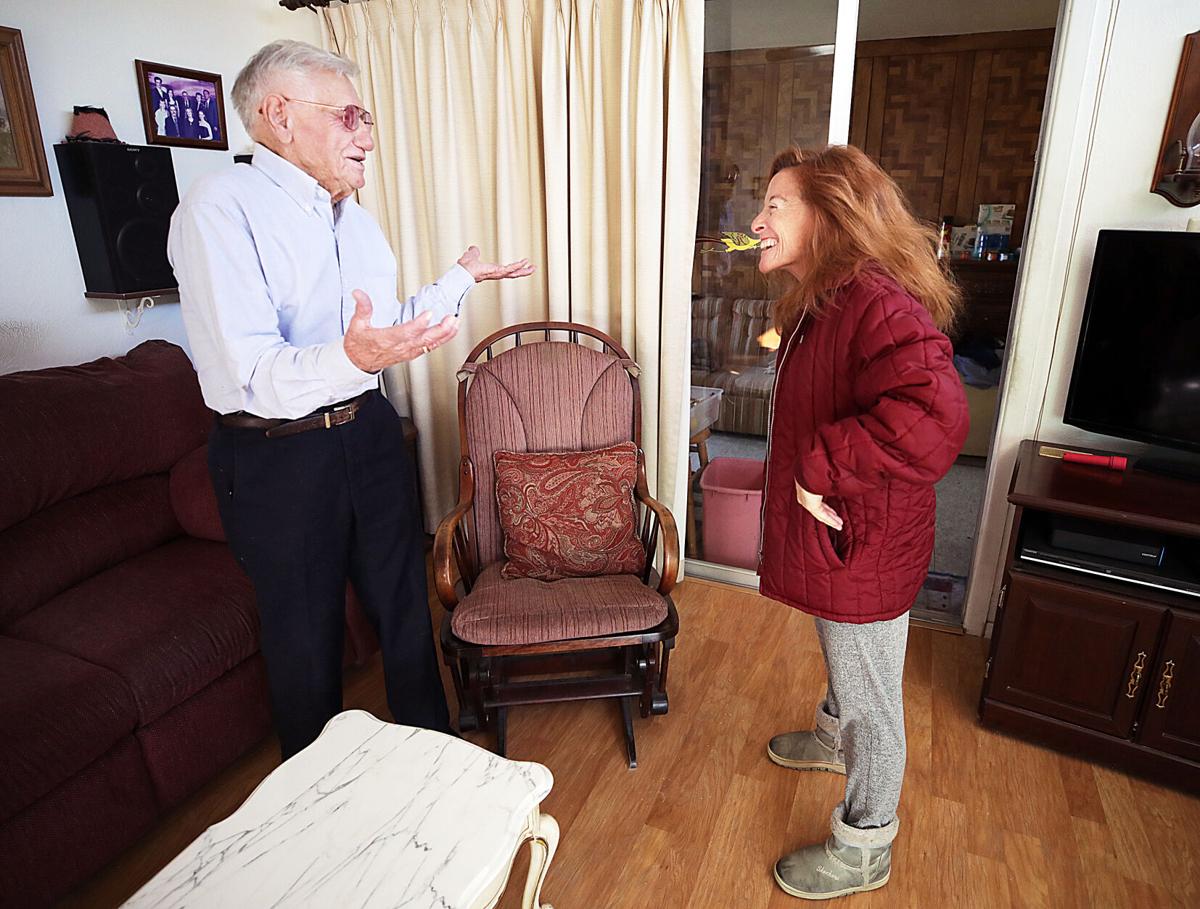 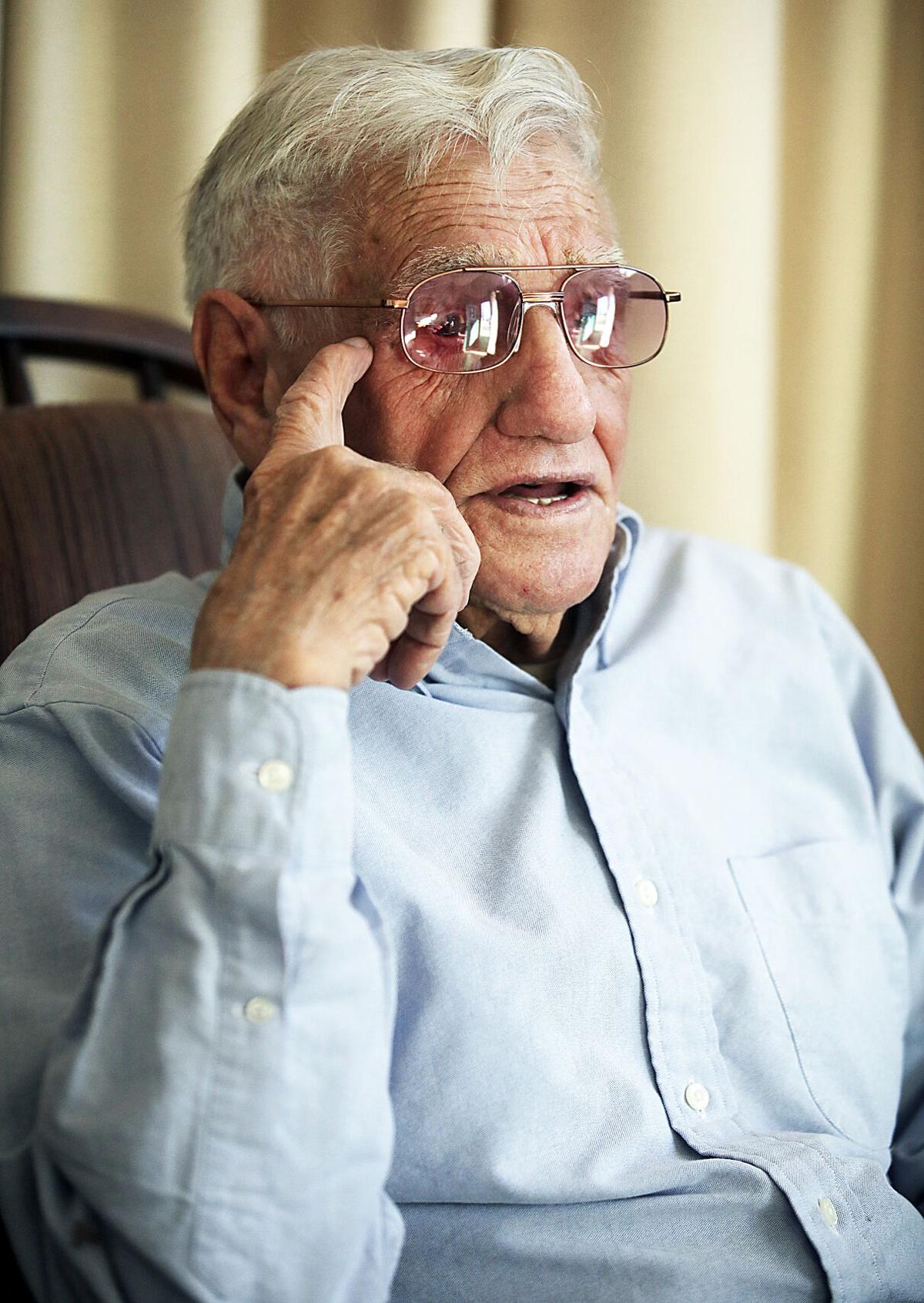 Veteran Gilbert Perry talks with a friend Tuesday in his Sierra Vista home where he has lived for 50 years. 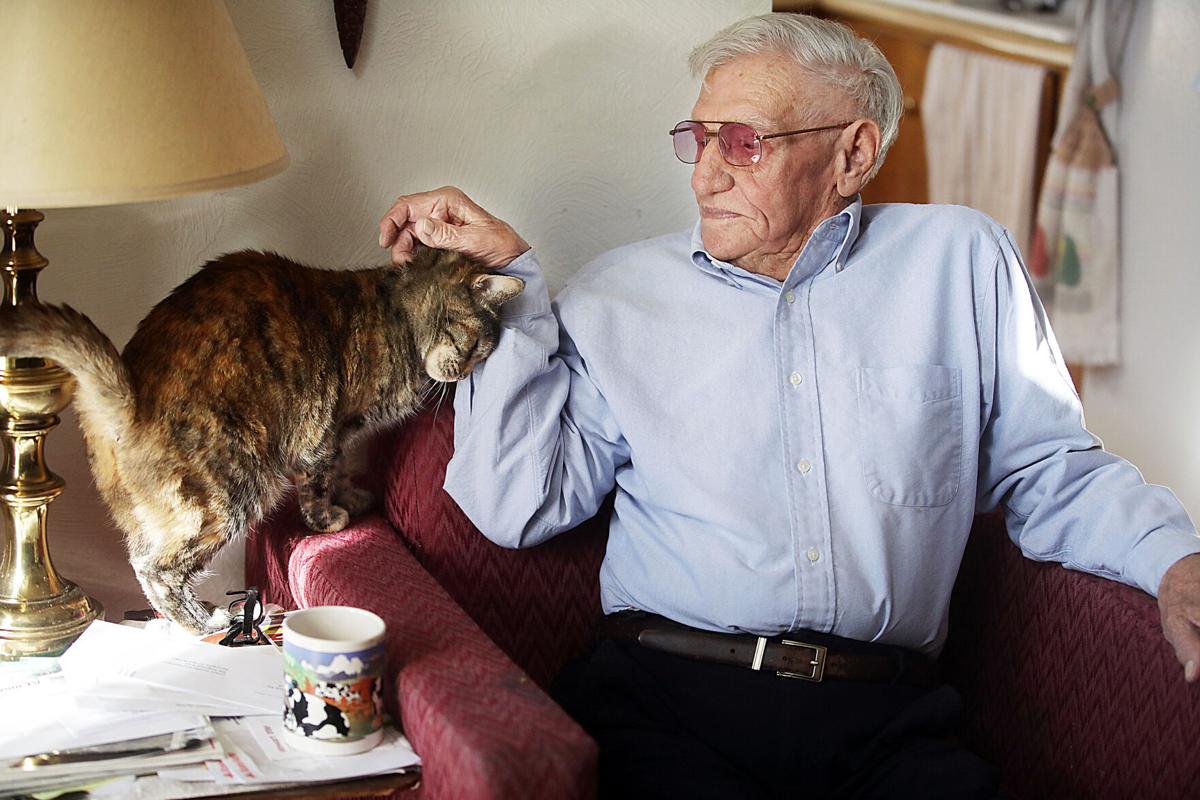 Gilbert Perry loves his animals. He interacts with “Kitty” while relaxing in his home.

World War II veteran Gilbert Perry stands at his home in Sierra Vista. The 95-year-old served in the Coast Guard as a 17-year-old in 1942.

Gilbert Perry at 17 just before shipping out with the Coast Guard.

Sierra Vistan Gilbert Perry chats with one of his three cats.

Gilbert Perry with his younger brother, Armand, during the Korean War.

Veteran Gilbert Perry talks with a friend Tuesday in his Sierra Vista home where he has lived for 50 years.

Gilbert Perry loves his animals. He interacts with “Kitty” while relaxing in his home.

SIERRA VISTA — World War II veteran Gilbert Perry is full of stories about his time with the United States Coast Guard, from his enlistment in 1942 at age 17 until he was medically discharged in 1944.

After leaving the Coast Guard, Perry’s WWII experiences resumed when he joined the Merchant Marine.

With vivid recollection, Perry, who is 95, talks about his war experiences in the Atlantic while serving on a Coast Guard convoy escort, along with stories he shares about his two brothers and their military service. His older brother, Ralph, served in the Navy in WWII, and a younger brother, Armand, was with the 1st Marine Division in the Korean War. Both brothers, Gilbert said, “saw a lot of action.”

“I wanted to join the Marines, but the office was closed when I went there to sign up,” he said. “That’s how I ended up in the Coast Guard. Chances are, I wouldn’t be sitting here talking to you today if I had enlisted in the Marine Corps,” added Perry, while pausing to stroke one of his three cats before launching into a plethora of war stories.

“I was doing convoy duty in 1943 not long after joining the Coast Guard. We escorted one of the largest convoys that had taken place during WWII at that time. We had 148 ships and were headed for the Strait of Gibraltar where some went into the channel, some went into Gibraltar Harbor, and some into the Mediterranean.”

The Germans were very active in the Gibraltar area at the time, said Perry, who described daily barrages of U-boat attacks.

“We were dropping depth charges the whole time I was there, from May to December. The Germans were all over the place, but we sank a lot of their ships.”

After Perry was discharged from the Coast Guard in January 1944, he joined the Merchant Marine in June of that year.

“I was on a tanker that went to Venezuela for a load of gasoline, and we made that trip with no escort,” he recalled with a chuckle. “When I think about that today, I think wow! There were German submarines out there — not a lot of them, but the Germans still had some submarines operating. They especially loved tankers because they carried fuel, and if they knocked out a tanker, it blew up and you didn’t survive.”

Perry recalls making two unescorted trips to Valenzuela during his time in the Merchant Marine. They transported one load of gasoline to Rhode Island and the other to Maine.

In November 1944 he was part of a large convoy to Italy.

“I served both on the outside of the convoy and the inside. It was much easier on the outside because I liked all the action,” he said with a wry smile.

“When we arrived, the Italians were singing and dancing on the streets because we were carrying vital stuff they needed. They were very happy to see us.”

After WWIIRaised in Bedford, Massachusetts, Perry had two brothers and two sisters.

“My father, Manuel, came to this country in 1906 from the Azores in Portugal when he was 8 years old,” Perry said. “He was very patriotic. All three of his sons served in the military and all three of us saw a lot of action. My father was very proud of our military service.”

Perry’s older brother, Ralph, was in the Navy and landed at Iwo Jima under heavy fire.

His younger brother, Armand, was a member of the 1st Marine Division that was trapped by the Chinese army in the Chosin Reservoir in North Korea.

Both brothers, Perry said, saw serious action. Like Gilbert, Ralph and Armand survived and returned home. Ralph is deceased, while Armand, who is 90, lives in California.

After World War II, Perry returned to his family’s home in Massachusetts for a few years while he attended school on the GI Bill.

But a radio newscast on June 25, 1950, caused him to return to the Merchant Marine, this time enroute to Korea.

“I was living at home on my parents’ farm in Massachusetts at that time, when I heard a special news bulletin that the North Koreans had crossed the 38th Parallel and were heading south. I was driving my ‘49 Hudson home from school when I heard about the invasion. I parked the Hudson on one side of the barn and told my mother I was leaving for San Francisco.”

With his Merchant Marine papers in hand, Perry said that Union Hall in San Francisco was “ablaze with activity” when he arrived.

“We were at the Oakland Army base loading gasoline, K-rations, ammunition and medical supplies, everything they needed for the frontline,” he said.

Those supplies, Perry added, were a priority.

“We had to get to the frontline as fast as possible. Since I already had my Merchant Marine papers, I boarded a ship right to Korea.”

While in Korea, he was able to find his younger brother, something his mother had requested that he try to do.

“I was able to find Armand and spent two nights with him at his camp in the 1st Marine Division,” he said. “That made my mother very happy.”

Back in the U.S.After the military, Perry worked for Aluminum Company of America, or ALCOA.

“ALCOA provided a lot of transport to islands in the Carribeans. I did a stint with them, and we went from one island to another and dropped things off. It was a great experience because I got to see that part of the world when it was still nice,” he said with a laugh. “I traveled the Carribean when there were no crew ships in the harbors, just beautiful islands.”

In 1955, while living in Massachusetts, Perry married his wife, Yvette. After 48 years of marriage, Yvette died in 2013.

The couple headed to Tombstone in 1965 when a doctor advised Perry to move to a dry climate because of asthma. He started a glass blowing business in November 1969 in a building located along Tombstone’s historic Allen Street. The business is now closed, but Perry still owns the building.

He and Yvette purchased their Sierra Vista home in 1970, where he lives today, 50 years later.